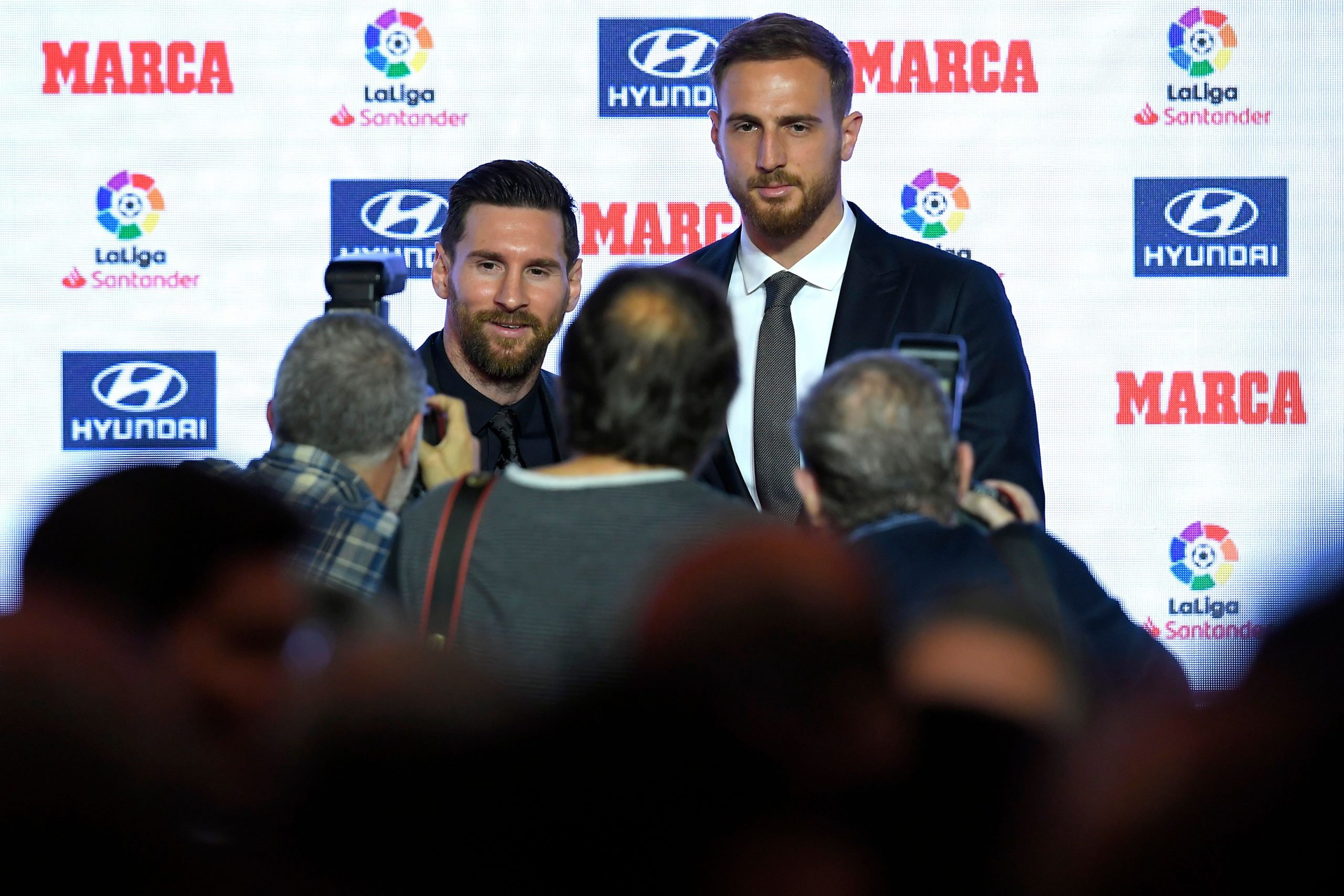 Jan Oblak is inarguably one of the greatest goalkeeper in the world, and perhaps the best among the current generation. His shot-stopping has been matched by very few others of the last half-a-decade.

His performances become extra noteworthy when we consider the players he has gone up against. Oblak has successfully kept the likes of prime Neymar Jr, Luis Suarez, Karim Benzema, Antoine Griezmann, Cristiano Ronaldo, and even the greatest of all time Lionel Messi quiet.

That said, Oblak has also had some of the best seats in the house to Messi masterclasses. In an interview with Sky Sports, the Slovenian spoke as a La Liga ambassador, as part of Budweiser’s celebration of Lionel Messi’s record-breaking 644th goal.

“He watches my legs,” Jan Oblak tells Sky Sports. “If I make one step, he will see it and shoot to the other side. This is why he is the best. This is why he is so difficult. He does not show it but he is always looking. He is always watching you. His eyes are on the ball but he sees you. He sees everything, I think.”

Oblak continues in praise of the six-time Ballon d’Or winner: “He is still the best player in the world.”

As a goalkeeper, he’s been on the receiving end of Messi’s wrath, but there have been games like the 2-0 win in the quarter-finals of the UEFA Champions League in 2015/16, where Oblak has pulled his team through the danger. He recalls that game, saying, “For sure, that was my best memory against him.”

Oblak knows all too well that Messi has scored ten goals past him in his career, and speaks about it: “He has scored many goals against me. Too many! But he is a great player, an amazing player, the best player. There are many times that he scores a goal and you have this feeling that you cannot understand how he has scored so easily. You are not even close. Sometimes it feels like he has just passed the ball into the goal, it is not even a shot.”

It is clear at this point that Oblak is a huge fan of Messi. Truth be told, who isn’t?

Oblak is asked if there are special tactics deployed by Diego Simeone for Lionel Messi when they take on Barcelona, to which his reply is:

“Normally, goalkeepers, we are shouting all the time to help the defenders but I know it is difficult when Messi is on the other side. The defenders do their best but it is difficult to do anything tactically to stop Messi because you never know what he is going to do.

“All you can do is play hard and when you see him don’t leave him. Try to steal the ball but don’t give a foul close to the goal because he is great at free-kicks. He is great at everything. If you are too close he will go past you. If you are too far he will shoot. It is not easy to decide how you will defend against him because of his unpredictability. It is impossible.”

Additionally, Oblak is asked if Messi’s shots can be read, and how where he shoots often. “That is the problem of Messi for goalkeepers,” says Oblak.

The next question focused on the timing of Messi’s shots, and if they can be predicted. Often we have seen Messi pull the trigger when the goalkeeper was least expecting him to, catching him flat-footed.

As a goalkeeper, the worst kind of situation you can find yourself in is when you go 1vs1 against Messi, and Oblak concurs.

“If you go down, he will chip you,” he explains. “If you stand up, he will go through your legs. If you go right, he will shoot left. If you go left, he will shoot right. But, in one-on-one situations, the most important thing is to wait until the last second.

“Do not speed things up. You need to watch the ball and to wait.”

Sometimes all the preparation in the world can let you down, especially against Messi. But you still have to go through the psychological hamper of understanding what he will do with each passing minute on the clock.

“When you play against the best, you know you are going to have to be at your best to stop them,” adds Oblak. “But you also know that when such a good player is playing against you there is always the possibility that he will score. If he does what he can do, it is impossible.

“If he has his day, if he is in great shape, it really does not matter if you are at 100 per cent. His talent is too much. Most of the time, you must accept it is going to depend on him.”

Finally, Jan Oblak is asked about Messi’s future, which has been dangling on a tight rope since the start of the season after his move away to Manchester City was blocked by Josep Bartomeu.

“Some good players from Barcelona went out, some new players came in,” says Oblak. “It is not easy for them, it is not easy for him. But he will show that he is still the best, I am sure. Even if he does not play so good in one or two games, at any moment he could show again that he is the best. He has been showing that every season for the past 15 years.

“Barcelona should be very pleased he is there. He has shown this with the titles that he has won and how many goals he has scored. Barcelona without Messi are totally different.”

“I am sure that he is going to score many more than just 644, even though it is already a lot,” he adds. “It is a really special achievement. I can only say the best words about him because he is the best. He has shown it for so many years and I can only congratulate him, wish him all the best, and hope that he scores many more goals. Just not against me.”