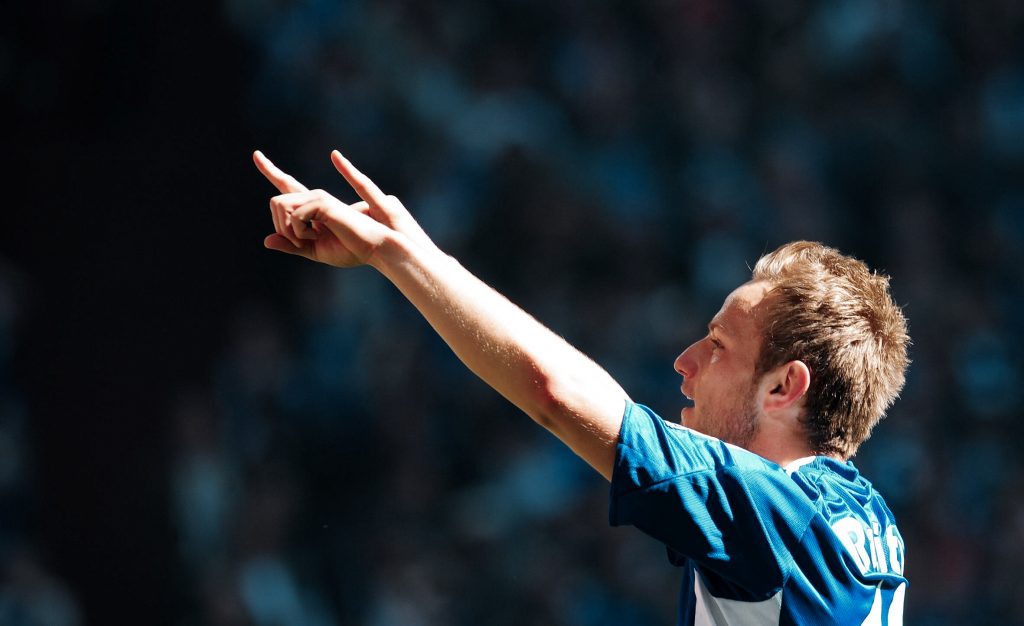 With the Bundesliga resuming on Saturday, the transformation of Iván Rakitić explains the rise from a prospect at Schalke into a winner at Barça.

Roughly two months later, football is back. And it’s back with the first of the top 5 leagues to resume its competition: the Bundesliga. German football returns with a strong clash, as it’s nothing less than a Revierderby what will open this weekend’s matchday. Teams will have to adapt to a new reality, and watching a silent Signal Iduna Park will be a very odd sight for any football fan. With that being said, the encounters between the clubs of the Ruhr region are always historic. Games between Borussia Dortmund and Schalke 04 never disappoint, regardless the circumstances. A young Ousmane Dembélé had the privilege of taking part in these derbies, while his current teammate Iván Rakitić had the same opportunity in his three and a half years in Germany.

Rakitić, a boy of Croatian parents but raised in Switzerland, began impressing at Basel, where he was named the best young player of the 2006/07 Super League season. As another exciting prospect from the Swiss academy, Iván was transferred to Schalke in 2007. He made a quick start to life in Germany, scoring in his Bundesliga debut against VfB Stuttgart. Yet Rakitić had high aspirations, and wouldn’t stop till achieving them. “As a little kid, I dreamed of scoring a goal past the great Oliver Kahn”. So, in only his fifth Bundesliga match and only his first against Bayern, the 19-year-old beat Kahn in what was the only goal he has ever scored against the Bavarians.

He had joined a Schalke side that was on the rise. In his first appearances at Gelsenkirchen, Rakitić already forced his way into the starting XI of a very young and thrilling squad. With academy products like Mesut Özil and Manuel Neuer established in the first team, the Royal Blues finished third in the league in Iván’s opening campaign in Germany. His figures were impressive for a teenage attacking midfielder: 3 goals and 10 assists in that 2007/08 Bundesliga course.

Schalke 04, where it all began for the likes of Manuel Neuer and Iván Rakitić | Photo by Imago

However, with Özil having departed to Werder Bremen in January 2008, and with three managerial changes, Rakitić’s second season with Schalke was much tougher. He was left out of the starting line-up consistently, and Die Königsblauen ended in eight in the league table. But then, in 2009 the now Croatian international started experiencing a massive transformation. It was coach Felix Magath who marked him the most. While Rakitić had previously been deployed mostly as an offensive playmaker in the left, right or centre, Magath exploited the defensive qualities no one else seemed to had spotted in the young player. First Iván struggled to adapt to a more all-round role, as he exclusively played the full 90 minutes once in the first half of the 2009/10 term. Nevertheless, after the second match of the new year, the former Basel sensation became undroppable. He did not miss a single second of action, as he played 12 of the following 17 games from a deeper midfield position.

❛ The holding midfield role in football today is perhaps the most important position because there are both defensive and attacking responsibilities. I decided to play a similarly important role for Schalke ❜

Hard working in defence, he contributed to the attacking phase too. In Magath’s 4–2–2–2, Rakitić began deep in midfield but had a box-to-box role. In that campaign he scored a total of 7 goals. Then, he only made 16 Bundesliga appearances in the 2010/11, but it was for other reasons that his numbers dropped. Excelling alongside teammates like Neuer, Raúl, Höwedes or Huntelaar, in January 2011 Sevilla were convinced that Iván needed to be signed. So on to Spain he went.

At the Sánchez Pizjuán he initially operated between the lines again, but he learned all about the difficulty of playing in tight spaces. More precisely, it was Pep’s Barcelona that challenged him the most. Talking about one of his meetings with Barça, he said: “In the first half, I found it hard to get involved while playing as the number 10 because Barça take the air out of their opponents. During the break we then agreed that I drop back into a holding midfield role to organise the game from deep and stabilise our defence. Against Iniesta I needed to get aggressive, which worked quite well, although it’s frustrating with his movements and feints”.

With every passing year, Rakitić elevated his status as he was becoming a legend himself in the Andalusian capital. Ahead of the 2013/14 course, Unai Emery named the versatile midfielder Sevilla’s new captain. That year the Croatian ended up lifting his first and only Europa League trophy, after a penalty shootout against Benfica in a final in which he was named Man of the Match. He was included in both the UEFA Europa League and La Liga Team of the Season. In 2014, as Barcelona looked for a potential successor to Xavi, Rakitić fulfilled his dream of moving to the Camp Nou.

Except for this last season, Iván has been a regular for Barça in every single year in Catalonia. Transformed into a more tenacious and industrious midfielder, his complete role has been key in, among many other achievements, winning the Champions League and Treble in 2015. In the Bundesliga from 2007 to 2011, the same period his now teammate Arturo Vidal spent at Bayer Leverkusen, Iván Rakitić went from a promising creator at Basel and Schalke to an extraordinary and triumphant midfield general in Spain. A conversion for glorious success.