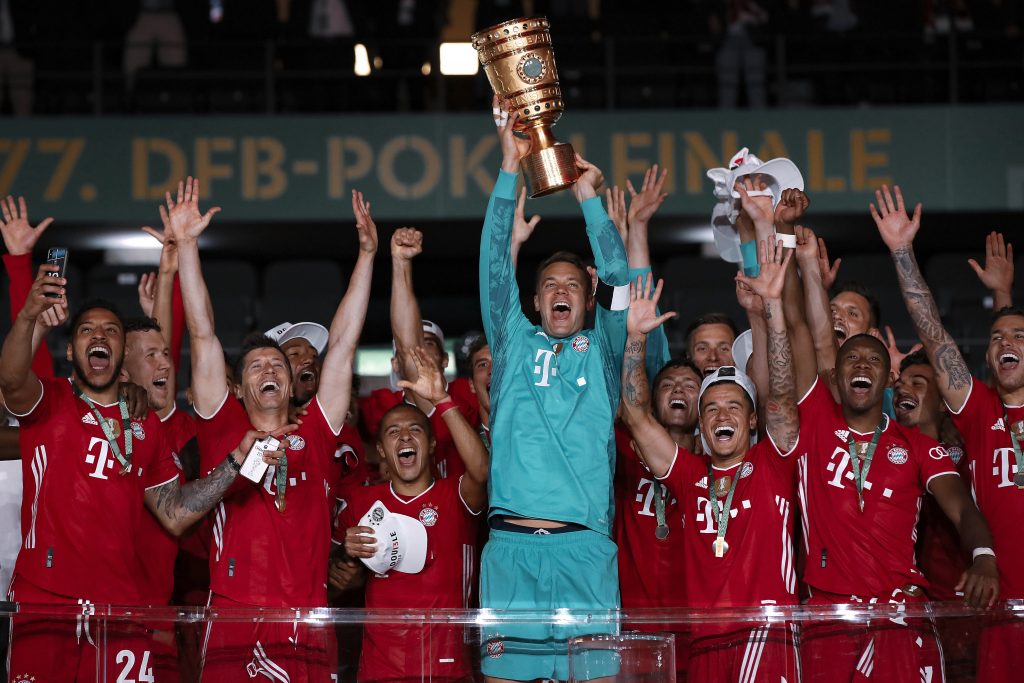 Bayern are a top side, but their players and fans have been talking too much recently. Today, we ask the question: do Bayern really warrant that hype over them?

There is no worse thing in football than being smug. A team full of confident players is a great thing, especially when their ability matches their confidence. The problem in football is that nothing is linear. You can have the best team in the world, made of World Cup winners, Ballon d’Or winners and world-class footballers and still lose to minnows if you do not concentrate enough.

So many times in football, David prevails over Goliath because Goliath doesn’t fully understand what’s in there for them. The reason behind Greece’s success in 2004 or Atlético de Madrid’s miraculous league title win ten years later is because being the underdog and, on paper, the worse team doesn’t mean anything compared to being fully focused on one goal for the entirety of the season.

Lately, ever since football has come back, one fanbase has been cocky and dismissed every other one. Indeed, Bayern Munich are a super team. Their history, their style of play, their players: everything’s legendary about this club. In the last few years, Bayern have not been the force they once were, though. Under Carlo Ancelotti and Niko Kovač, Bayern lost their pedigree. In the Champions League, they struggled a lot ever since winning that famous treble in 2013.

Losses against Real Madrid, Atlético de Madrid and Barcelona have been rather embarrassing, to say the least. Conceding four to Real Madrid under Pep Guardiola is unacceptable. Being too pretentious before facing Messi and getting chipped in the process is probably Manuel Neuer’s lowest of lows.

“I have a lot of respect for Messi and for everything that he has achieved. He is very humble. But it’s crucial to show authority when we meet on the pitch and show him who’s boss. I did the same in the World Cup final and this worked out pretty well”

Still, Bayern have regained their giant status in Europe under Hans-Dieter Flick’s leadership. The German coach has reignited the fight in his players’ hearts. Thomas Müller, once a brilliant goalscorer, is now the most creative player in Germany. Robert Lewandowski is the best striker in the world. Joshua Kimmich is probably the most intelligent player in the world. Yet for having those players, Bayern fans have to be arrogant.

There’s no other choice than having faith in a team that has beaten Tottenham 7–2 at the New White Hart Lane, Chelsea 7–1 over two legs and beating every big club in Germany, en route to yet another Bundesliga and DFB Pokal double. Meanwhile, Barcelona supporters’ loss of confidence in their own side has matched the Bavarians’ faith. On Twitter or any other social media platform, culés have been joking about how their own team is going to get ripped by Bayern. Now, this is quite the overreaction from both sets of fans.

Bayern are a good team, probably in the top two or three, if not one, in the world currently, but they are not gods. Yes, the Germans have incredible players, as mentioned, but they have to understand that they are going against another giant in European football. While the Bavarians’ numbers have been crazy, let’s not forget that they are the big boys in their league. No disrespect to the Bundesliga, but Bayern has won it every single year since Jürgen Klopp dominated in 2012 with Borussia Dortmund. The way the Munich side lures the best players out of their domestic rivals is like vultures in front of a dead body.

From Lothar Matthäus to Karl-Heinz Rummenigge, Bayern legends and icons have made sure to disparage Barça’s quality | Photo by Dean Mouhtaropoulos / Bongarts via Getty Images

Ever since the restart, Bayern have been scintillating, beating Dortmund with a fantastic Kimmich goal, demolishing Bayer Leverkusen in the final of the Cup, and not giving any hope to the other German opponents. Nonetheless, can one say that Bayern has really been tested?

They have passed some difficult tests this season, no doubt. Beating Tottenham, Chelsea, Dortmund or other historic sides in German and European football is impressive, but these groups haven’t been at the best this year. Chelsea is rebuilding, Tottenham seems to be going in the wrong direction, and Dortmund was of no match for Bayern.

“To this day, Lewandowski is better than Messi. I love what Messi does and how he plays, he has been a top player for many years, a genius, but this year Lewandowski has been above everyone. He can do anything and he scores every ball that comes to him. And he will continue to do so. He is having a spectacular season”

Besides, Bayern look set tactically. They have great players who understand their positions on the pitch. However, they have been hyping up their stars too much. Lewandowski is a goalscoring animal, but he is nowhere near Messi’s level in terms of overall impact and talent. Manuel Neuer’s 2014 form is probably the best keeper in the history of the game, but the current Marc-André ter Stegen may be better than him at present. Alphonso Davies is one of the biggest surprises in world football, but could he really stop Messi if he was fit enough? Karl-Heinz Rummenigge definitely thinks he can.

“If Messi plays on his side of the pitch, Alphonso [Davies] will take care of him. It will be a difficult, but interesting task. Alphonso hasn’t been outpaced or dribbled past often this season”

Bayern play excellent football, they have the players that fit in their system like gloves, and they have the right manager for once. Everything is clicking Bayern’s way, but people should always be critical of their side, even if it’s the best in the world. You don’t win matches with your mouths; a footballer would instead use his feet and brain to win.

It’s not that Bayern is not that good; they are. It’s that Bayern have put themselves on such a pedestal that if they lose on Friday, they will look like fools and complacent enough to warrant criticism from the opposing rivals especially. For culés, they should understand that to be champions; you have to beat the best at some point. It doesn’t matter if you face the best side in the quarter-finals or the final because you have to be the best yourself. Bayern are excellent but, probably, overhyped; these two concepts can coexist.