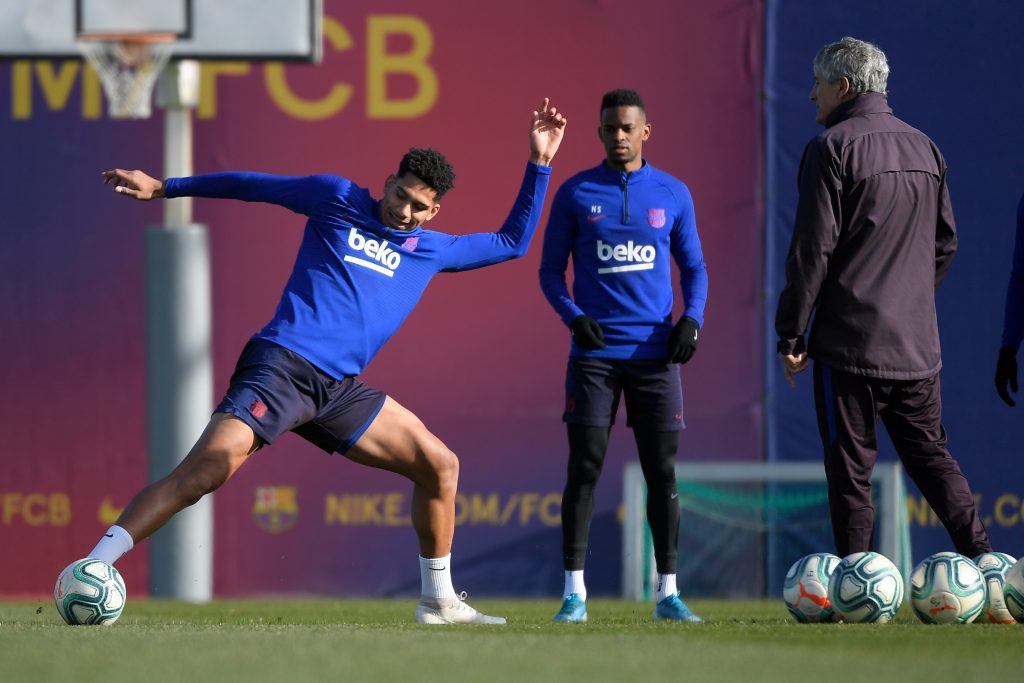 With Todibo’s exit, Barça is left with only 3 center-backs: Piqué, Lenglet and an injury-prone Umtiti. Clearly a fourth candidate is necessary that will have to replace Jean-Clair. Fortunately for the Azulgranas it’s not necessary to take a look at the market. In Barça B we have a warrior named Ronald Araújo who is ready for a new challenge: The first team.

This last week has been a transition stage for Barcelona. New coach, new system and a new era. Before Setién’s arrival, Schalke 04 and Barça reached an agreement for Jean-Clair Todibo to leave on loan until the end of the season. Only one official announcement was missing. Our new coach didn’t have the choice to stop the transfer since it was practically closed. With Todibo’s exit, Setién’s weapons in defense are less. Piqué, Lenglet and a injury-prone Umititi. All of them are perfect for our new coach’s style. Like a ring to the finger. Even so, considering Umtiti’s health, 3 center-backs aren’t enough to rotate. A fourth defender is necessary. The best news is that the team doesn’t need to sign anyone. In Barça B there’s a suitable talent to replace Todibo. The most indicated is Ronald Araújo. But, will he be ready to play with the first team?

The 20-year-old player arrived last season at La Masia from the Boston River club in Montevideo. In just one season, he has already managed to enter to the first team dynamics. He has even debuted in an official match with the Azulgranas. On October 6 he had the opportunity to play after three of our four centre-backs got injured: Todibo, Lenglet and Umtiti. The team won against Sevilla. Despite that we could appreciated Araújo’s debut, he received a red-card in a very controversial call by Mateu Lahoz.

Araújo is one of the great projects to reinforce the defensive positions of the first team. More than a future prospect, this player is already at the right time to make the big jump. Its speed, always well-positioned, imposing wingspan, an impressive height of 1.91 meters, which still has a large margin of growth, considering that he has only 20 years. In addition, an excellent and explosive dominance of the aerial game. Its strength and physical intensity make it a piece to take into account in order to replace Piqué or Lenglet in some games this season.

Total adaptation to European football, and specifically the Barça game style, together with an improvement in its ability to minimize mistakes are some of the characteristics that he has to continue polishing in order to reach a new level in his game. At the orders of García Pimienta, and in Second Division B, the Uruguayan centre-back played last season a total of 28 games, where he scored three goals. This year, Araújo combines calls between the first team and the second team. In addition, the defender has been international with the Uruguay U-18 team and also with the U-20, with which he has scored two goals. In fact, he participated in the U-20 World Cup last summer, reaching the knockout stages. And now he waits for the call to debut with the absolute charrúa National Team.

“Ronald Araújo? He comes from far away, he has only been with us for a short time, but he wants to learn. There is much room for improvement, but with the attitude he has, he will be a very important player for the club in the future.”

Although everything sounds perfect, the South American has a lot of room for improvement if he wants to play an important role with Quique Setién. His technique to keep the ball at his foot and his touch with the ball make him a player of less caliber for the system that will be established. That is why options like Jorge Cuenca or Mingueza could become more attractive for a more fluid game. Both have the ball-playing abilities that Setién wants, attributes that Araújo lacks.

On one hand we have Cuenca. Left-foot but with a dominant right drive. A greater perspective playing the ball from the bottom, one of its most impressive attributes is precisely its contribution at the beginning of the play. With Pimienta, the one who starts the plays, the one who knows how to maintain that tranquility and the one who plays perfectly with the ball is Cuenca. Quiet with the ball on his feet. If there is a defensive section in which this player stands out is the aerial game, almost as good as Araújo. Above 1.90 meters, with good timing of jump and finish, smell both to attack the ball frontally and to be placed in the area before a center from the shore, it’s usually a protective shield of great efficiency against any attempt of bombing. In summary Jorge Cuenca is the most talented option despite being injured.

On the other hand we have Mingueza, who with Cuenca’s injury, has had much more opportunities. He has been extraordinary in the last matches. Ball control, good passes and has a facility to start plays and be the one who takes the ball to the opponent’s area. He’s currently vital for the Barça B team. Even so it has many mistakes when it comes to defending and with consistency. Nothing that cannot be corrected with a little work. He deserves an opportunity.

Finally we have Chumi. Little by little we’re forgetting him. A few years ago it was a reliable option to be promoted to the first team but lately its level of play has dropped dramatically. Chumi is a tall center with a good physique, fast with good ball output and very versatile, since he can play as a full-back. We could clearly see the decline of this player week after week. He’s just a substitute. In everyday situations the couple of center-backs of the second team are Araújo-Cuenca. In situations of injury is Araújo-Mingueza. Chumi is just a lifesaver in case of a catastrophe making him not the best option.

The debate is between Araújo and Cuenca. Although the Spaniard is the most talented of all of them and the one that would best fit Setien’s plans, his injury could affect this decision. The Uruguayan is a safer bet. His privileged physique, his goals in important moments, strengh and intelligence make him a more reliable option. Maybe he doesn’t have the same skill with the ball, but it’s something technical, little by little with the suitable works. Araújo could dominate this defect. And this doesn’t mean the end for Jorge Cuenca, once returning from his absence, at a better football pace and a couple of months adapting again to Barça B, he deserves to have a chance too. At the moment, Ronald Araújo is ready and is the right man to play in the first team.

Quique Setién at Barcelona 2019/20 – tactical analysis
What did you think of this article?