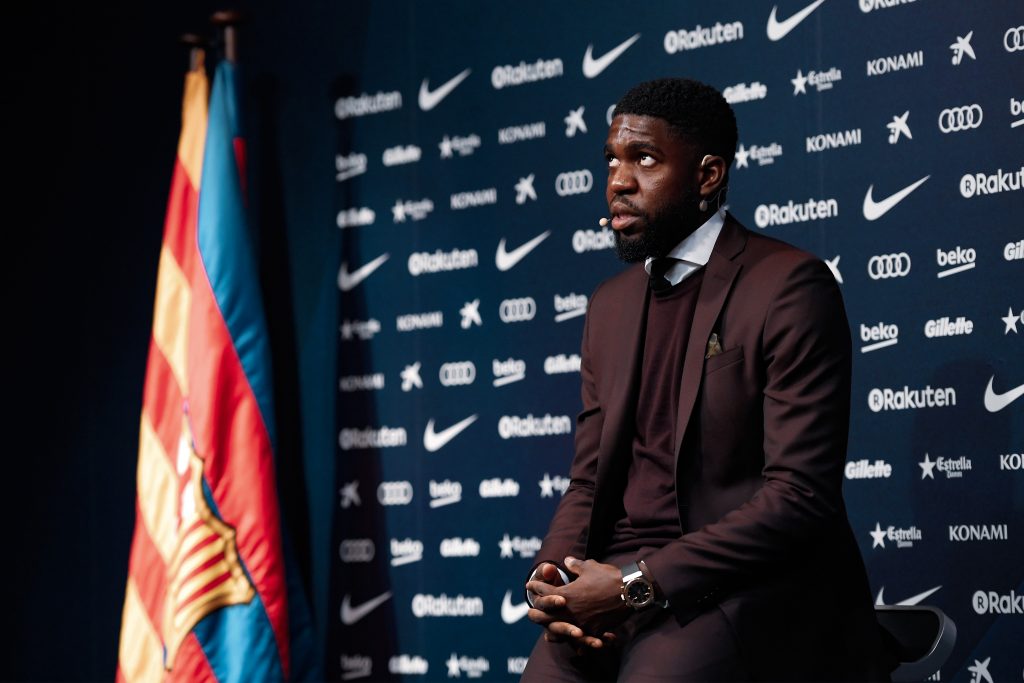 Umtiti was often though of as the future of the Barcelona backline with at least another eight years under his belt. Recurring injuries and depleted confidence have however made it a totally different case. At this stage, should Barcelona look to sell Samuel Umtiti?

The day was 30th June 2016. A young highly rated centre-back stood on the grasses of Camp Nou, proudly holding the world-famous blaugrana colours for the first time. That was a 22-year-old Samuel Umtiti coming from Olympique Lyonnais. After the departure of Carles Puyol in 2014, he was meant to be the active leader for the backline of the club. Certainly, he didn’t let the fans down. He terrorised opposition front lines with a combination of his daunting figure, impeccable confidence and french flair.

His career peaked at the 2018 FIFA World Cup, where he won the coveted silverware with the star-studded French national team. After that, however, the path has only been downhill for him.

Samuel Umtiti took a decision before the commencement of the World Cup in Russia that turned the course of his career. After being recommended a surgical intervention to get over a knee ailment, he chose to play through the pain for his country. After the event, he still opted against surgery, which he felt would keep him out a long time. Instead, he decided to go for a conservative treatment programme in Qatar to “take a step back and not choose the easy option. The easy thing would have been an operation”, as he confessed.

“I had to work on strengthening my quadriceps and a whole chain of muscles. It was a big imbalance. I had had it for quite a while, and I had to work three times harder to get back. During the World Cup, I didn’t necessarily do what I needed to. Or rather, did things I should have avoided”

Umtiti was undoubtedly a fan favourite. People had them on their dream teams for ten years down the line, expecting him to be one of the key figures in Barcelona’s post-Lionel Messi era. Expectations on him rocketed sky-high after his triumph at the biggest stage but came crash landing soon after. It has really been hard to watch such a steep fall for such a talent-laden young footballer.

Nevertheless, it was always expected that he would eventually make a complete recovery and return to compete for his position. The issue never subsided, in fact, continued to recur at regular intervals. Lack of continuity and constant impediments slowly ate at his confidence. He continued to play under the habitual fear of overstraining his knee and aggravating the injury.

While choosing to sacrifice the World Cup over his fitness could be understandable, it may have been a career-defining decision | Photo by Franck Fife / AFP via Getty Images

Eventually, a young and determined Clément Lenglet, arriving from Sevilla in 2018 lunged in and made the most of his opportunities. Having won the trust of coaches and teammates alike, he easily displaced Umtiti from what once used to be his undisputed starting position.

The matter at hand is not about Umtiti not being able to find his old self, but that he isn’t able to do so consistently. He has delivered some standout performances that got fans wondering if the same old next Puyol has found his way back to the Camp Nou.

Notwithstanding, he has never found his rhythm again. Every time it appears he has finally hit the ground running again, a new setback pops up that rules him out of the next few games. This inconsistency along with his massive depletion in confidence has brought up speculations regarding his future at the club.

The rebuilding of the club

Needless to say, the next few years threaten to be pivotal for the future of FC Barcelona. The last players of the golden generation are coming to the twilight of their careers. It is indeed time for the next buds to blossom in this grand estate. It is at this point that the question comes up: Is it realistic to expect Umtiti to be a regular starter for the club in the future?

The answer keeps tilting more and more to the pessimistic side as each day passes.

As the club plans ahead, it certainly makes more sense to give opportunities to the young talents that may actually make it. Ronald Araújo and Jean-Clair Todibo are two such young prospects who have what it takes to become regular starters in the long run.

Still, with Samuel Umtiti is in the squad, they remain as fourth choices and hardly and match experience throughout the season. The club could also opt in favour of signing another young centre-back like former La Masía gem Eric García, now 19 years old at Manchester City and linked with a move back to Barcelona. Yet, Samuel would still be an obstacle between the player and the spot in the team. Unfortunately it looks like it might be the time to sell Umtiti.

What is next for Umtiti

It would be harsh to say that Samuel Umtiti’s career is done and dusted. He certainly still is a daunting presence on his day. If his injury conundrum can be resolved, he would be a major asset for any club in Europe. Given the current state of Barcelona, it doesnt make sense for them to keep him financially nor for sporting reasons.

The Catalan club already spends a major chunk of its budget on player wages. Umtiti earns a weekly wage close to £210,000, higher than the likes of Marc-André ter Stegen and Jordi Alba. Does it make sense for such a financially pressurised club to keep a footballer that can barely stay fit? Is it sensible to keep him in the squad, halting the development of other potential stars?

Umtiti has repeatedly been told to go under the blade, but he has no intentions of doing so even today. And with the conservative treatment repeatedly failing, it looks like the best thing to do would be to move him on. It will certainly be difficult to sell Umtiti,an injury-prone player with such a high wage bill. The demand in the market for experienced and young centre-backs, though, is very high.

It is possible that a potential buyer could be found in the Premier League. Given the current market situation following the pandemic, the azulgranas can hope to make 20 to 25 million for the 26-year-old. That said, purely in a sporting sense, it would make sense to sell him on a free transfer too. He wasn’t what he could be here, but there is no telling what is in store for him in the future.