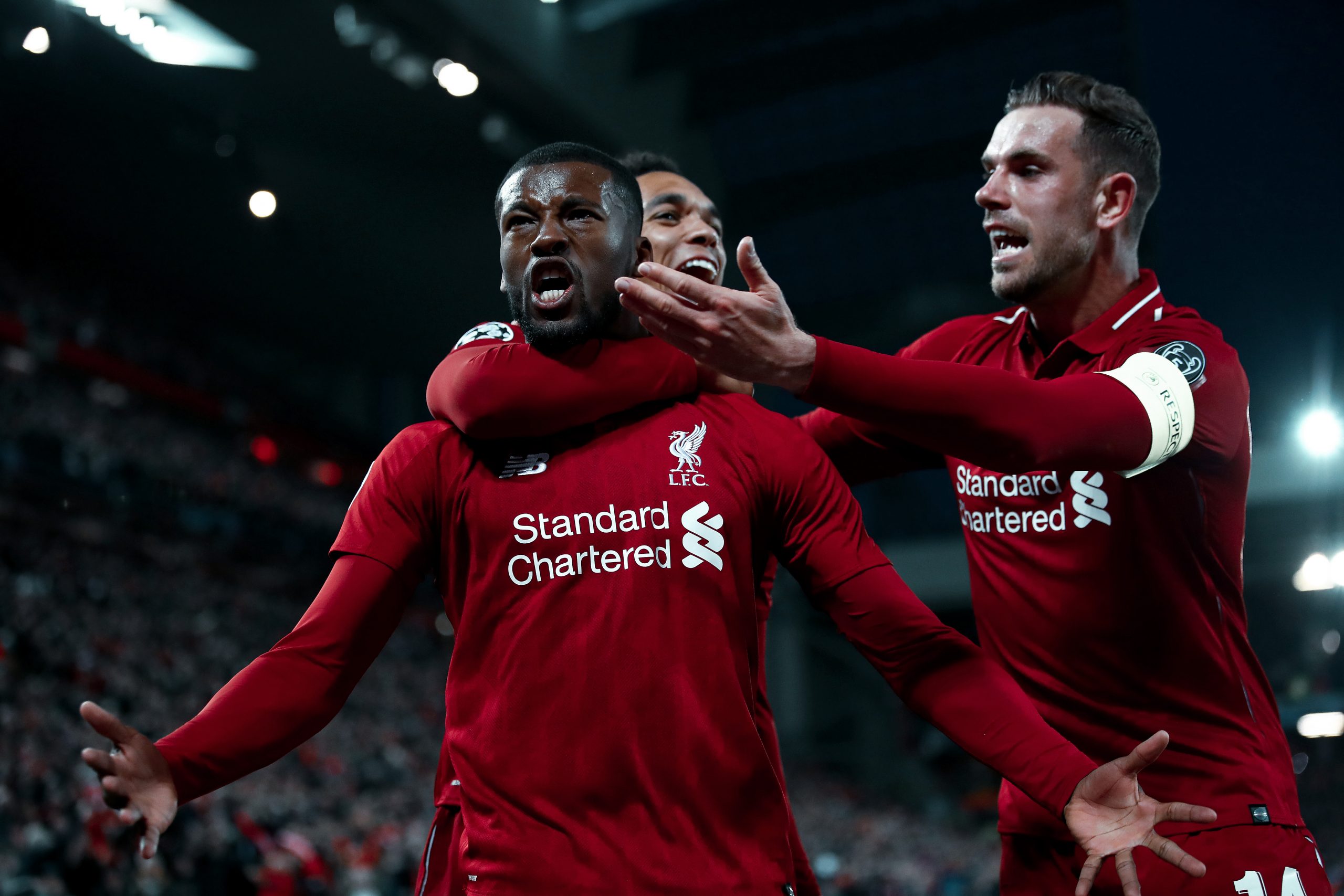 Barça is making massive moves in the transfer market in terms of outgoings. The azulgranas have offloaded Ivan Rakitić, sending him back to Sevilla. While Lionel Messi’s transfer saga continues to shake the footballing world, there is a need for Ronald Koeman to bring in his type of players. One name that’s lingering around Barcelona is Liverpool’s Georginio Wijnaldum.

29-year-old Georginio Wijnaldum played a crucial cog in Liverpool’s pursuit to their first-ever Premier League title in the modern era in the 2019/20 term. Still, what Barcelona fans remember him with is bitter memories, due to the brace he scored against them in the Champions League semi-finals at Anfield over a year ago. Today, the Dutch midfielder is tipped to be one of the names that new Barça coach Ronald Koeman has suggested to the board. With Ivan Rakitić having officially moved to Sevilla, and rumours of Arturo Vidal also heading the door, there are now two freed spots in the midfield.

While culés expect these spots to be filled up by La Masía graduates like Riqui Puig, Carles Aleñá and Monchu Rodríguez, the likelihood of this happening is less. Koeman wants to sign experienced footballers who not only have tactical know-how but are also strong-willed. It’s a no brainer that there is a pressing need for introducing players who have a winning mentality and don’t crack under pressure.

However, while the transfer window always leads to some bizarre rumours emerging, Wijnaldum’s situation at Liverpool adds fuel to the fire. He still hasn’t renewed his contract with the Scousers, as it expires in 2021. And, with the English outfit looking to sign former Barça man Thiago Alcântara, Wijnaldum’s links to the Camp Nou have strengthened.

Gini Wijnaldum has come a long way in his career as a footballer. Having spent the majority of his developing years in the Eredivisie, he moved to the Premier League in 2015, joining Newcastle United. He was one of the silver linings for the Magpies who were relegated in the 2015/16 season. At the end of the campaign, Liverpool were quick to snap him up, paying £23 million with a further £2 million in conditional add-ons. And since then, he hasn’t looked back.

Jürgen Klopp’s Liverpool is not a team that depends on the midfield for creativity. The vast majority of the Reds’ creative output comes from the ever-pressing, ever-running full-backs. Andy Robertson and Trent Alexander-Arnold are responsible for stretching the game wide and making overlaps to their wingers. The service into the box from these two has been sublime. Therefore, that’s the primary source of their chances.

And so, the midfield functionality is entirely different from most football teams. The trio of Wijnaldum, Fabinho and Jordan Henderson is responsible for putting an endless shift in the middle of the park. They press heavily, closing down opposing midfielders and preventing them from having any time in building the attack. Klopp’s so-called Gegenpress works magically due to the midfield combination he has assembled. Amongst them, Wijnaldum is the underrated workhorse. His understanding with the other two midfielders allows that trio to be mobile in their ball retrieval tactics.

Wijnaldum is more of a box-to-box midfielder. He is an intelligent player who is always well-aware of what his manager expects from him. From winning the ball in the centre of the pitch to making late runs inside the opposition box, Gini‘s work rate is visible on the pitch. He never stops running and is always communicating with Henderson and helping the team out not only in defensive but offensive aspects as well. His unparalleled work rate is something that several coaches and players have spoken highly of.

Koeman working with the Dutchman in the national team must have allowed him to make a detailed assessment of his abilities. And this would explain why the new Barcelona boss wants to sign him.

What would Georginio Wijnaldum bring to Barcelona?

For starters, Wijnaldum is a more tactically astute and technically capable midfielder than the soon departing Arturo Vidal. We have seen the Chilean midfielder’s efforts in the centre of the park, where he aggressively closes opposing players down. Vidal’s work rate on the pitch has been appreciated by many fans. But on the contrary, he is deemed as reckless for the number of fouls he makes in the process.

Unlike Vidal, Wijnaldum has a more calming presence on the pitch. He is aware of when he should push forward, and when he should stay back. Furthermore, his chemistry with Frenkie de Jong for the Dutch national team would amplify the familiarity in the midfield. In addition to the defensive work, he is also aerially steadfast. He would provide a different dynamic to Barça’s set-piece tactics, and basically improve the mobility in the midfield.

For years, Barcelona have refrained from feeding crosses into the box as they prefer to patiently play within the lines rather than forcing the issue. Sadly, the directness of their play needs to be high against sides who press heavily. It’s impossible to patiently build attacks versus teams like Bayern. The midfield shouldn’t only be positionally aesthetic but also be capable of quick transitions. Wijnaldum can find those passes that would urge the wingers to stretch the play wide and cause an advanced counter-attack.

There is a pressing need for Koeman to devise a Plan B for his team as the culés seem clueless when they have to approach the game differently. To have diverse tactical approaches, the coach should have players with diverse tactical profiles. Thus, even if Wijnaldum does not fit the profile of an ideal Barcelona midfielder, he wouldn’t be a terrible signing.

Why the deal is unlikely to happen

There is no way that Jürgen Klopp would be willing to let go of a player who has contributed enormously to the club’s success. Even though the links to Thiago have increased, Klopp wouldn’t want to lose a man like Wijnaldum as it’s challenging to find similar workhorses. Furthermore, from Barcelona’s point of view, this isn’t a player that would appeal to the fans. Having swapped Arthur Melo for Miralem Pjanić, the Bosnian is likely to join Frenkie de Jong and Sergio Busquets to form a three-man midfield or in a double pivot.

“It’s all between us and the player, it’s all good at the moment. All fine. Gini looked very good in preseason, played a couple of good seasons for us. So that’s all I can say about that”

Signing a 29-year-old who still has a lot to offer and is in his prime only to keep him on the bench might not be a feasible plan. Wijnaldum is probably at the best place for him as a footballer, and could even renew his contract in the following days. President Josep Maria Bartomeu and his fellow board members might not even grant permission to pursue Gini. As the board is in massive pressure to justify its performance, Wijnaldum might not a signing that would epitomise ambition.

Albeit the strong links, the chances of this deal going forward are less, at least at the moment. Any sensible associate to the club would be aware that the primary issue persists at the wider areas. Koeman can’t go into the season with the same full-backs and the same number of wingers. Even if the midfield is technically gifted, the entire team needs to be improved in a well-rounded manner. Wijnaldum is an excellent footballer. That said, he does not appear to be one that would immediately plug the tactical holes.

The midfield should be a position that the club looks at after signing full-backs and wingers. Fans would be massively excited if the board pushed to sign Sadio Mané instead of Wijnaldum. The Senegalese’s explosive wing play over the years has not gone unnoticed. If Lionel Messi leaves, they should invest whatever money they get from the deal to sign someone like Mané. A frontline of Ousmane Dembélé, Antoine Griezmann and Sadio Mané, for example, would be a statement to depict the dawn of a brand new Barcelona.

Regarding Georginio Wijnaldum, the transfer should not happen as it only complicates the midfield situation. Koeman should prefer integrating Riqui Puig into the first team while slowly giving new signing Pedri chances whenever possible. For now, the club does not appear to be working on any incomings until they resolve the most crucial issue they have in hand with Messi.