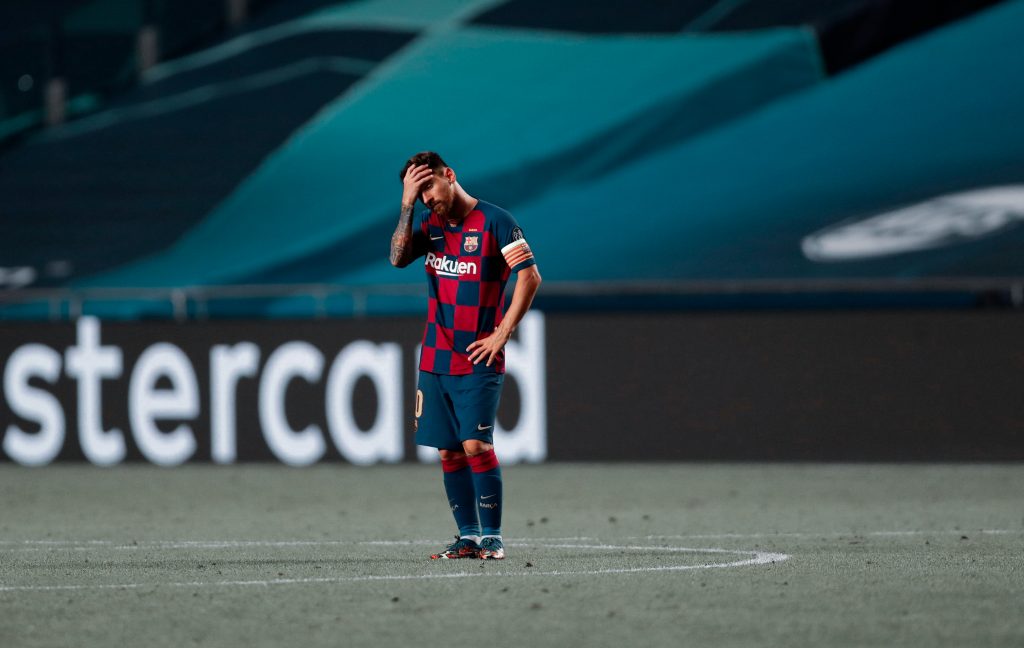 The recent rumours surrounding Barcelona struck hard. And probably you reading this piece of writing about Messi potentially leaving Barça got you even more anxious than you already were. But please, do not jump from the roof just yet, dear culés.

Lionel Andrés Messi. First name, Ever. Last name: Greatest. It would be pretty great to have such a sportsman in your favourite team, wouldn’t it? And blaugranas are in fact very lucky, because they have had it for years now. Let me rephrase really quick. They have had it forever. Since the first time Leo kicked a ball professionally, he was already a Barça boy. Humble, shy and little as he was and still is, he has always grasped at his home. Not his natural one back in Argentina. But the one that gave him a life different from the perspective that the one in South America had for him. Grandma Celia believed in him as a little child, Barça believed him as a teenager. And the Catalan club has believed in him ever since, without a single doubt.

You could think that when you are as good as Lionel Messi is, there is nothing wrong that you could do. If you want to stay, you will stay. If you want to leave, you will leave. And as much as all that greatness was never being underestimated from the whole footballing world, Leo never felt the need to leave his home. Because his home gave him a life, it gave him the possibility to play football and to enjoy it at its fullest. Plus, the fact that “F.C. Barcelona is best club in the world” also helped him in making such a decision.

And Barça, in fact, has always been amongst the kings of Europe. As I like to call it, the Queen: beautiful and elegant, yet so ruthless. It has been like that since Messi’s first appearances onto the biggest stage. He has always felt loved at home and, above all, competitive during the years. Even when he had to endure a lack of planning from his own board, from his own supporting cast on the field, from his own managers.

Leo went through many phases at Barcelona. But the only time it was ever talked about a possible exit for the little Argentinian was back in 2014. After a season collapsed by way too many injuries, he was on the brick of leaving his Barcelona. Only a beloved Tito Villanova could have made up his mind. There was never a moment in which Messi wanted out, apart from that. The rest, has always been media speculation and nothing more.

“Tito was at a delicate stage and Leo wasn’t convinced about his continuity. They met and although I wasn’t there, I know they spent a number of hours talking. Messi decided to stay and we hope that he will for many more years”

Nevertheless, from last year onwards, suddenly the rumours of Messi leaving Barça increased their intensity. And although he always publicly denied anything different from his love for the club that gave him everything, something strange was up in the air. His “without me, Barça would be the same, but without Barça, I would not be the same” quote slowly started to deteriorate. And within reasons

Barcelona, ever since Luis Enrique’s and Neymar’s got clueless as a club. The board shot blanks with their meaningless, yet expensive singings, the managers began to adapt a style of play that had never been in the club’s veins, the teammates’ Leo had began to rely solely on himself. Barcelona was losing itself slowly.

There comes a time where you have to put up an end to it. When everything that once was flowing, now stumbles. Where the finest music was produced, now it is disruptive. The gadget, not very suddenly but in perfect disguise, stopped working.

The Catalans lived more than an intense decade and a half. The resurrection to the finest level of football possible and Ronaldinho’s 2006 Champions League, the appointment of Pep Guardiola and Villanova and the Tiki-Taka‘s greatest show of all time, the transitional period before the last really happy moment lived by a blaugrana, the Luis Enrique era, and, finally, the slowly aging of the La Masía cells with Ernesto Valverde before, and Quique Setién after. A long sentence, for a long generation. Too long.

While Valverde’s era was already depicting a slow decline, this Barça generation was already finished after Luís Enrique decided to leave. Him leaving, the departure of the Barça identity on the pitch, of the expected successor of Leo Messi, and the money thrown away for big expectations rather than suitable options were all signs that this moment had to come. It was just a matter of time, but it was a given fact.

Barça has not been Barça for years now. While Leo Messi –– and Marc-André ter Stegen –– was actually able to disguise the club’s problems, at least some of them, the truth had to come out eventually.

And as the problems slowly surfaced openly, Messi’s certainties became Barça’s doubts first, Messi’s uncertainties after. After an already phenomenal 2017/2018 season, the following one saw the Argentinian in his most complete version of his career: passing, vision, finishing, dribbler, creator and, why not, kit man. But despite his ability to overreach the limit of greatness, nobody else on the team, nor the club itself, was up to the task.

He disguised Barcelona’s problems, until they were too many to keep doing so. And while the impact on the pitch from Messi was becoming more and more ephemeral in comparison to the actual need from Barça of complete structural overhaul –– even with still breathtaking performances game in, game out ––, the board’s initial calm over contract renewal talks had become everyday more and more anxiety than it should have been with fears of the little genius leaving growing. No signature on any legal piece of paper called contract since December 2017.

Now, after another, third consecutive failure, Barça is grasping at straws. While the club need a complete change, from top to bottom, bottom to top, president Josep Maria Bartomeu needs to get his own things together. Does he want to be regarded, in the history of the club, as the president that could not avoid the greatest ever, Lionel Messi, from leaving Barça? He certainly does not. But what he wants and what Leo wants are two completely opposite things, in this moment.

It’s been a few months already that Messi tries with words, messages and actions to make the board understand his feeling, his needs, that fairly represents the club’s. Elections. Calling out early presidential elections would be the difference between having Messi in and having Messi out. A new project, a new management, a new fresh start with strong and clear lines to follow for finding the path of success again. But while Bartomeu’s stubbornness seems to resist until the end, we are now dangerously cautious about Leo’s willingness to keep being fed up of false promises, projects and words.

Some think that the speculations of Messi leaving are being thrown out there to force early elections at Barça. Some actually fear that the Argentinian could leave. Now or in a year’s time, who knows. But the reality depicts a 33-year-old who, despite being heavily regarded as the greatest of all time, has wasted many years of his career in the last three, four seasons.

One Champions League in five years, two in ten. The greatest club competition in the world has been lifted by its main actor only two times in a decade. And to put more oil onto the pan, these has been arguably Messi’s best years as a player: complete, mature and leader. Despite having such a resource, it’s unthinkable the mess he has been surrounded with to make it all useless, more or less.

His love for the club will never fade away. He will cheer for Barça no matter the circumstance and he will pray for the club to get back to success for the next ten, twenty, thirty years. He will be the happiest man alive seeing those blaugrana shirts filled with pride, talent and joy. But there comes a time where the mind has to separate from the heart. Where despite all the good stuff you have made for each other during the years, you feel like you have payed your dues. And if you think straight for a minute, Leo Messi actually overpaid them and probably deserved the chance to choose what is best for him, once.

Is this the end? Nobody knows, but however it goes, it’s business. No hard feelings.