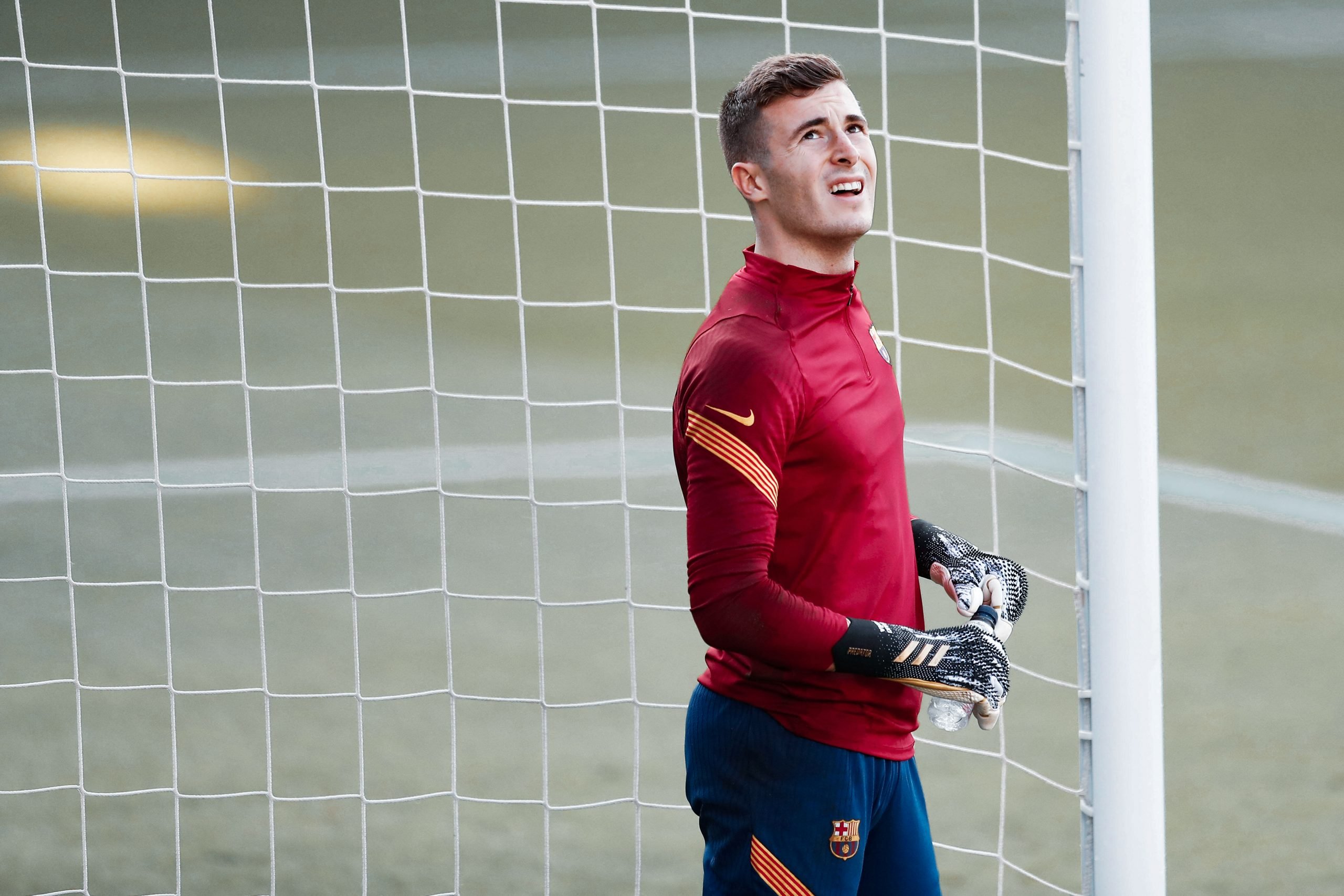 Two hours into what was a heated matchup, both literally and figuratively, the referee blew his whistle under the afternoon sun of south-eastern Spain. The score at the end of extra time led the teams to the decisive penalty shootout. Having scored two goals, both Barcelona B and UCAM Murcia were playing for the chance to keep their promotion hopes alive.

Calm, cold, unfazed, the 22-year-old goalkeeper saved the penalty with a perfect assessment of the situation and impeccable timing. The crowd behind the goal erupted in cheers as the Blaugrana had newfound hope. However, this didn’t just happen once, or twice, or even thrice. Face as expressionless as always, Inaki Pena saved four penalties and walked way to roaring cheers as if it was routine.

To Inaki, this incredible feat actually was routine. At the age of 14, Peña saved six penalties against Atletico Madrid in a U14 tournament. He took it upon himself to score the winning penalty in the same shoot out and undoubtedly delivered. His knack for stopping penalties has always been apparent, but the Spaniard is more than just that.

The Spaniard started out with Alicante CF’s teams at the age of five. He joined Barcelona at the age of 13 after he caught the eye of their scouts at the prestigious Arona tournament held for the alevín teams. His rise has been promising as he played under some of the best coaches of La Masia in Garcia Pimienta, Franc Artiga, and Denis Silva.

Turning 22 just some two months ago, Inaki’s performance against UCM Murcia was just the latest of many reminders that he is too good for the Segunda.

The fact that he has maintained this for many years is an ode to his quality. It’s hard to pinpoint a specific area where the goalkeeper from Alicante can be exploited. From his distribution to his positioning, to his ball-control and reflexes, Inaki is a very well-rounded goalkeeper.

At 6′ 1″, Inaki is on the shorter side for goalkeepers and is an inch shorter than Barcelona’s first-choice in Marc-Andre ter Stegen. Despite this, his height rarely seems to place him at a disadvantage. One of the main reasons for this is how solid his basics are.

When defending the goal, many factors come into play. However, positioning, posture, and anticipation are arguably indispensable. In the example below, we see the 22-year-old standing at the first post as the opposition launches a corner. His initial angle will prevent any flick-ons from creeping into the near post. As the ball approaches, the angle must change.

In the second image, we see Inaki now facing the ball as it crosses the penalty area. The angle and area covered are pretty basic here, but it’s the posture that matters. With his back arched, the goalkeeper must crouch down a bit.

The power generated by the legs will be transitioned into a perfect leap only if the back remains stiff as it helps in generating explosive power. These details mean that Iñaki is rarely caught out unaware or unable to reach the ball which makes him a straightforward, yet reliable shot-stopper.

Inaki’s role as a goalkeeper is as a sweeper keeper. Naturally, he has to be good with the ball at his feet. Granted, the passing range is essential as a keeper, but a huge percentage of goalkeepers lack the necessary accuracy to make this passing range meaningful. In the case of this 22-year-old, his passing accuracy is highly impressive. As the distance increases, so does the uncertainty. Despite this, Inaki maintains his highly impressive passing accuracy.

Yet another role of the sweeper-keeper is to run out and charge onto the ball depending on the situation. This is yet another aspect in which Inaki excels. His sense of timing is dependable. Aided by his positioning and posture when charging forwards, he consistently performs in 1v1 situations.

Saving penalties is probably the hardest part of a goalkeeper’s job. Even taking everything till the instant the ball is hit into account, luck plays a part. The best goalkeepers are the ones who are able to maximize the analytical parts of penalty shootout and decrease the portion involving luck. The Barcelona B’s keeper’s penalty-saving abilities come down to his timing, posture, and observation.

In the first image shown, we can see the penalty-taker a step before he can take a shot. Standing on his toes, ready to heave his arms in either direction, there is little to no clue as to where Inaki will go. This means the striker can’t decide where to shoot an instant before shooting, as is conventional at the highest levels. Penalties become a game of poker when highly-skilled players are involved. Is it a bluff? Or is that actually the direction the striker will shoot towards? The goalkeeper’s job is searching for ‘tells’ and going all in.

The second image shows the direction Iñaki has chosen to dive towards. Milliseconds before the ball is struck, now we can see the direction the Spaniard will go in. He ends up saving this penalty.

The part of observation is clearly present in Inaki’s repertoire as he wouldn’t be saving penalties as often as he does without it. Yet another thing that affects the striker is the fact that Inaki is reputed for saving penalties. It is improbable this doesn’t have an effect on the penalty-taker’s conscious.

A weapon in the arsenal?

Speaking in terms of statistics, a great goalkeeper is one who can outperform the team’s xGA. Marc-Andre ter Stegen has done better than his xGA suggests. He should have conceded 39 goals, but he has conceded 38. The stat isn’t negatively showcasing the German, but let’s get some perspective.

Ter Stegen is a great goalkeeper with immense talent. This season has been rough, though. Barcelona’s defence has been sub-par, to say the least. But so has Real Madrid’s. Atletico Madrid, on the other hand, maintain a strong defence. Despite this, both teams’ goalkeepers have overperformed on their xGA by 11 and 10.6, respectively. The question we should be asking isn’t “how has Ter Stegen done this season?” but rather, “Is ter Stegen’s performance along the lines of what FC Barcelona should be expecting?”

From the German’s way of interacting with fans on social media to him never lacking professionalism, to the affection he shows for the club and city of Barcelona, there is much that could act as a bias for our assessment. But thinking logically, ter Stegen hasn’t been good enough. A goalkeeper can’t perform to his best without a strong defence. Barcelona have struggled in that aspect as well, which means the goalkeeper faces harder situations as well.

The latest news surrounding MaTS is that he will be missing the EURO 2020 competition. Prior to this season, he faced a similar situation which led to Neto Murara starting in between the sticks for Barcelona.

On 22nd, we might see either Neto or perhaps Inaki starting for Barcelona. The former is set to leave Barcelona this summer, while the latter has just shown his calibre in a wonderful display for Barcelona B. With the league already lost, it would make little sense in the long term and in the short term to start Neto over the Alicante-born goalkeeper.

In Inaki Pena, Barcelona have a great chance to do two things. Firstly, provide competition to the goalkeeper who has struggled. Secondly, to promote a goalkeeper made for Barcelona instead of paying a transfer fee in millions for another. It would be unrealistic to expect Inaki to outperform ter Stegen. However, give him a chance, and he just might amaze us, much like Oscar Mingueza or Ansu Fati.

It’s especially hard for goalkeepers to break into the first team. However, many times these goalkeepers waiting in the wings are in fact ready to handle the responsibility a first-team role entails. For example, one of the most successful Barcelona goalkeepers ever Victor Valdes debuted at 20 years of age and was a regular by 22-23.

Ter Stegen himself made his Barcelona debut at the age of 22, going on to become a regular starter at the age of 24. Inaki is 22, and he has shown he deserves to be the backup goalkeeper at the very least.

FC Barcelona prides itself on historically being a club that gives chances to homegrown players at a young age. Pena’s case is a test indicative of what Joan Laporta will show us in the future. By giving this young goalkeeper a chance, the club would be taking a step into the future by stepping back into the past. Barcelona have a star on their hands. He has demonstrated his talent time and time again. What remains to be seen is whether the club has the courage to give him a chance to prove himself in the first team.