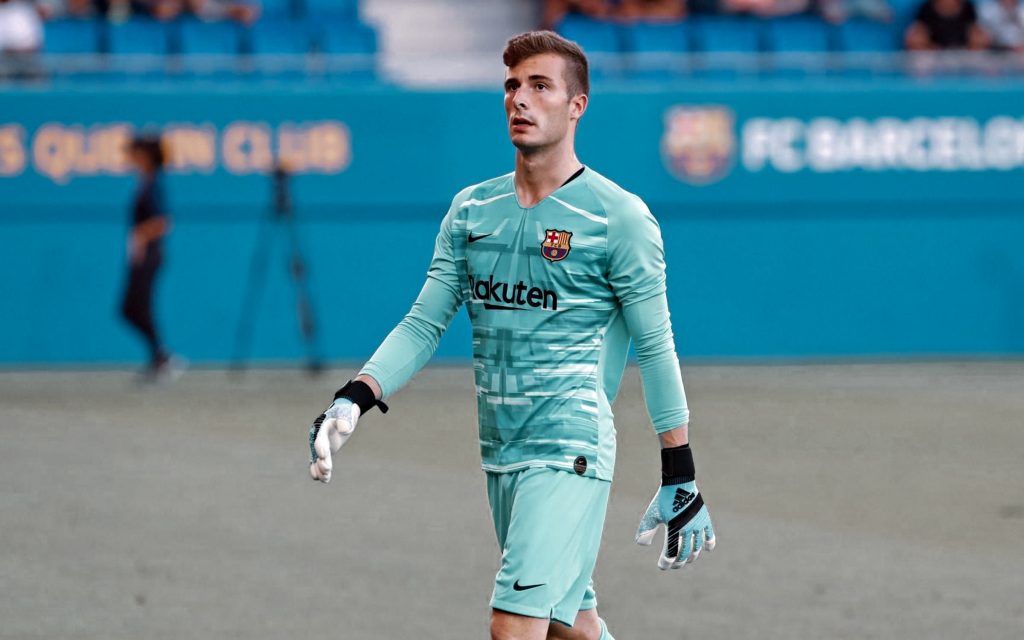 Barça B’s extremely promising goalkeeper Iñaki Peña is ready for a step forward in his career, but as Ter Stegen’s back-up in the first team he may not have enough minutes. What should the club do?

Barcelona can feel very lucky, but somewhat unlucky at the same time, to have two extraordinary goalkeepers coming up at La Masía. Iñaki Peña and Arnau Tenas may well be the best two keepers the academy has produced since Víctor Valdés. Nevertheless, they are unfortunate enough to have been born with a small difference of only two years and, on top of that, to have to see how Ter Stegen is young and making history with every passing season at the Camp Nou. The German is immovable between the sticks for the Catalans, but the most unfortunate victims of this possibly are Iñaki and Arnau.

The stylistic similarities between the two youngsters and Ter Stegen are more than obvious to the general eye. Looking up at Marc-André and being able to learn from him is a privilege few are capable of enjoying. However, not even the most complex of formulas could see all of Ter Stegen, Peña and Tenas succeed and make a lasting impact at Barcelona. The former Mönchengladbach wonderkid is already building his own legacy, but the two La Masía talents – at least not both – will not be able to do the same for a mere question of age. And this undeniably is very unfortunate, as culés won’t fully exploit the qualities of two sensational gems.

García Pimienta with Arnau Tenas and Iñaki Peña, after the UEFA Youth League title won in 2018

Still, what Barça must do now is to not think too far ahead. Just go step by step, and each year’s events will already be shaping the fate of them all. Now, with Ter Stegen undroppable in the first team, and Arnau Tenas deserving to be promoted to Barça B from the Juvenil A, the dilemma is what to do with Iñaki Peña. The 21-year-old’s last two seasons with the B have been outstanding. Extremely reliable and gifted with the ball at his feet, he rarely, if ever, makes a mistake when it comes to facing the shots of the opposing strikers. Elastic and agile to get off his line, he covers space really well and is an expert both in one-on-ones and in penalties.

For his superb reflexes, anticipation, positioning and footwork, as well as some specific gestures, Iñaki Peña does look like a mini clone of Ter Stegen. Quality wise he’s still not there yet, of course, and has to gain much experience. In fact, the Spaniard is yet to feature in a single game for Barça, whether that’s official or friendly. Not even in preseason has Peña been handed his senior debut for the azulgranas. While he has been called up with the Spanish U–21, he hasn’t made his debut there either, so the only professional category in which he has taken part is the Second Division B, with Barça B.

Iñaki is unquestionably ready for much more, as so are many of his teammates. He deserves to be part of the senior squad, having shown enough level and merits for that. It would by no means be unreasonable to say that, once he gains more experience, he clearly has the potential to be Barcelona’s starter one day. But, with Ter Stegen aged only 28, the best he can aspire to at present is being Marc’s back-up. That means having a very secondary role, with La Liga and Champions League being reserved almost exclusively for the number 1.

What’s left is only the Copa del Rey, which translates to six matches a season at maximum. Far from enough for a player aged 21 that needs playing time to develop. In this sense, Quique Setién’s words in one of his first press conferences are somewhat encouraging: “Normally I make no distinctions between the goalkeeper of La Liga and of the Copa del Rey. Both [Ter Stegen and Neto] can play in all three competitions”. So, while Ter Stegen would continue to start in most games and all of the big ones, it would not be surprising to see the second-choice keeper be given some matches in La Liga against smaller sides.

While being the starter of Barça B, Iñaki Peña has also acted as the first team’s third goalkeeper this season

This could be a fine solution for Iñaki Peña, who could get the Copa del Rey for him as a challenge, and then get minutes from time to time in the domestic competition. Ter Stegen wouldn’t complain about that, and Iñaki would get benefitted. It’s something that, for example, Zidane has been doing in recent seasons: playing the second goalkeeper in La Liga to rotate the main one. In any case, even if he gets little minutes, Iñaki probably would be more than satisfied with being promoted, as that’s his childhood dream. He’s still young and has plenty of time ahead to play.

Another alternative would be to loan him out. The Second Division would be the most feasible destination, as in this category teams are more open to giving chances to footballers with no experience. Barça B, on the other hand, are fighting to get promoted from the Segunda B to Segunda. Notwithstanding, staying at the B, no matter whether they get promoted or not, does not seem optimal, as Arnau Tenas is about to renew his contract with the blaugranas and should be the reserves’ starting goalkeeper.

With this in mind, and more so considering the board’s desperate search for money, what seems more sensible is to sell Neto, who could have a transfer fee of 20 or 25 million euros, and use Iñaki Peña as the second keeper. No need to pay 30 or 40 millions on someone like André Onana when the 21-year-old is free and more than ready to be a back-up, or even starter if required in some bigger clashes too. Having Ter Stegen and Peña in the first team, and Arnau starting at the B, would have everyone happy. Even the club would get benefitted economically as well.