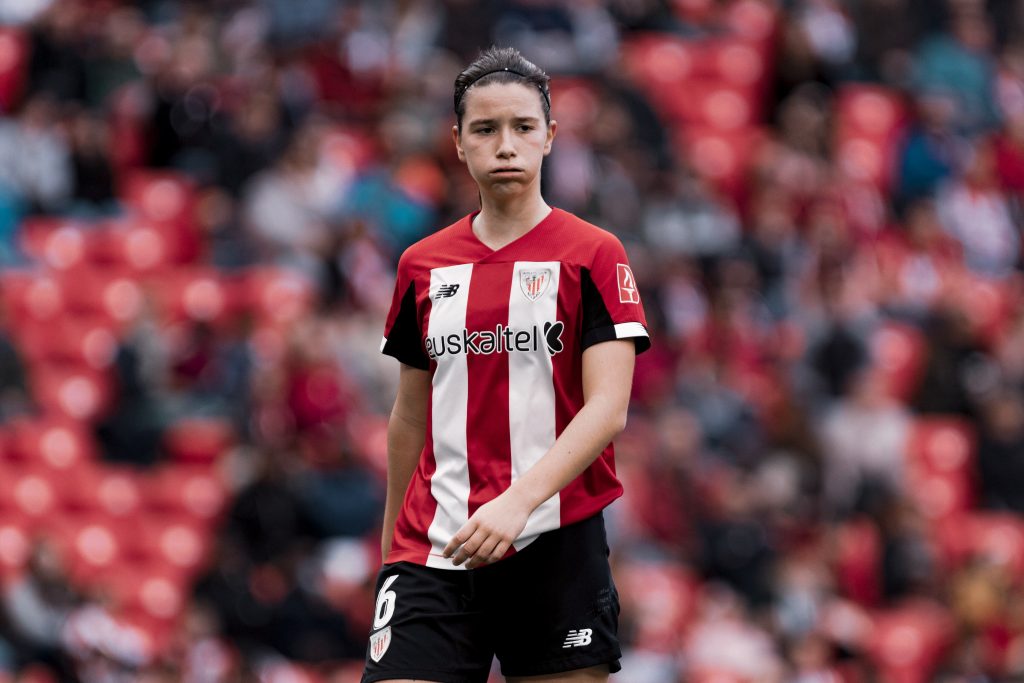 The contract of Athletic Club’s Damaris Egurrola expires this summer, and Barça Femení are one of the many clubs interested in her. Would it be a good transfer?

The summer transfer window is around the corner, and with rumors heating up, it is reported that Barcelona are interested in signing a bright young talent from Athletic Club de Bilbao in the form of 20-year-old Damaris Egurrola. On June 30, the Spanish defensive midfielder’s contract will expire at the Basque club. The news made a little splash in Spanish media after her father’s statements to Cadena SER, explaining that her daughter “made the decision to leave Bilbao, and whatever happens, she will leave!”.

Damaris is a star whose work rate, support play, and ability to get into the opposition box has been crucial to Athletic Club for the last few seasons. She amassed a total of 20 league games in the 2019/2020 season, in which she played 1,717 minutes, scoring a couple of goals and recording an assist on the way. In addition to that, she has also played 210 minutes in the Copa de la Reina, taking the total to 1,927 minutes in all competitions so far this campaign – more than any other Athletic player except Maite Oroz.

She was an international in the youth categories of the Spanish national team and played together with Patricia Guijarro, Claudia Pina and Candela Andújar in the FIFA U–20 Women’s World Cup in 2018, where the team placed in second. Before that, she won the European Championship with the U–19 national team. She has recorded 113 games in total for Athletic Club and has scored five goals.

• She was born in Orlando, USA, but has lived in Spain since the age of seven

• She began playing football in the playground at her school in Guernika, in the Basque country

• She has played for Athletic Club since she was 14

• On her position: “I played on the wing when I was young, but I think they could see that I didn’t have much of a future there, so I switched to wide midfield, central defence, and then central midfield”

Damaris is a footballer of many qualities, both in her skill and in her physical trait. At first glance, her most noticeable attribute is her height of 5’9″, or 1.76m, which she uses to dominate the aerial game. She is very solid defensively and understands how to give stability to the team’s game. Barcelona loves to keep possession, and this is another strong quality Damaris has that Barcelona can rely on. In an interview to FIFA.COM, she said about it: “I’m not scared of the ball”.

Damaris Egurrola, during the 2018 U–20 World Cup final with Spain | Photo by Fred Tanneau / AFP via Getty Images

She also talked about her role as a box-to-box midfielder: “That’s what you have to do when you play in that position: try to support your teammates all over the pitch and work hard defensively, though I also try to get forward into attack”.

Based on some of her matches from this season, her positional awareness remains the key when defending against the build-up play. Damaris also has exceptional vision and range of passing when she finds space. If you look at the picture below, you can see her threading the ball between the defense. This move didn’t end in a goalscoring opportunity as the winger was too slow to react. If a player of Lieke Martens or Mariona‘s caliber had received that pass, it would have ended up as a threat in the final third.

Vision and range of passes – Damaris is naturally left-footed

Her movement off the ball is another excellent facet of her game. She moves quickly to be free of a marker and receive the ball. In the below picture, there wasn’t any threat, as the ball was out for a throw-in and the attacking players were closely marked. Damaris started her run from deep midfield to receive the pass and sent a diagonal cross across the face of the goal while the opponents were ball watching. She is very calculative when she is needed in the offense and specific about her runs in the attacking third, as she is aware of the counter-attack when her team losses the ball.

She is technically good when it comes to controlling the ball in tight spaces, a quality that often describes a well-rounded player. She posses qualities similar to that of Patri Guijarro, who anchors the midfield for Barcelona. She can evade defenders with delicate touches and vision to get the ball rolling forward.

Her performance against Barcelona at San Mamés is something to look into. She was man-marking Alexia Putellas at times, the player who creates the most in the build-up play for Barcelona. Damaris effectively shut down spaces for Alexia and Aitana Bonmatí in the final third by pressuring them and making them uncomfortable whenever they got on the ball.

How she would suit Barcelona’s set-ups

In a 4–3–3 formation, Damaris would be best suited as a pivot. Unfortunately, this is the position where Patri Guijarro does very well. If Damaris is played along with Patri in the XI, there are three ways to combat the situation.

Patri has outstanding qualities as an attacker and needs to be played in an advanced position to bring out the best of her. In this case, either one of Aitana, Mariona or Vicky Losada would be benched, since Alexia is untouchable. The formation remains the same with Damaris acting as a pivot.

2. Playing Damaris as a creative midfielder

This is the complicated case because, like Alexia, Damaris is also left-footed. There isn’t a way to play two left-footed midfielders in the midfield from a tactical point of view, leaving one of either Damaris or Alexia to be in a starting XI.

Damaris would suit Barcelona best if they deploy a double pivot with Patri and Damaris holding the midfield, giving the license for the wing-backs to attack in front. Nevertheless, this would not suit the Positional Play football that Barcelona want to execute. It can be used as a tactical decision for a particular match, but it realistically couldn’t be a consistent tactical setup at Barça.

Things she would need to improve

Damaris is still a young player with a lot of potential for growth, but there are some things she would need to work on before becoming a blaugrana. For example, she remains out of position sometimes, tangling in between opposition players instead of freeing herself to receive the ball. Barca thrives with the mobility of the players. We have seen them constantly switching positions and finding space to receive and distribute the ball. Damaris is solid positionally, but she would have to be positionally versatile as well.

For free, 20-year-old Damaris Egurrola would undoubtedly be one of the bargains of the summer | Photo by Edu Del Fresno via Imago

Egurrola is a player who always strives to improve, and she spends her free time watching her performances over and over again. If Barcelona is able to pull off this transfer, it would be a bargain considering her talent, her experience, her age, and her insistence in improving. She would definitely fit into the team and would be the most suitable replacement if Kheira Hamraoui leaves as rumored, on account of her position and comparable height. Damaris would finally have the chance to play in the Champions League and could learn from some of the best players in women’s football.

However, her playing time would be limited considering Barcelona has an abundance of talent in midfield with Patri, Aitana Bonmatí, Vicky Losada and Alexia Putellas already occupying the center. If Damaris ends up at Barça, there would be additional complications with managing her playing time, as she is young and needs opportunities to play in order to develop properly. Just like every other Barça Femení fan, we hope the board won’t sign players just for the sake of signing. Instead, we hope they concentrate on much-needed defensive improvements, ideally by promoting or buying a centerback and a wingback to bolster the squad.

• Aitana Bonmatí: The future of Barcelona, Made In La Masía