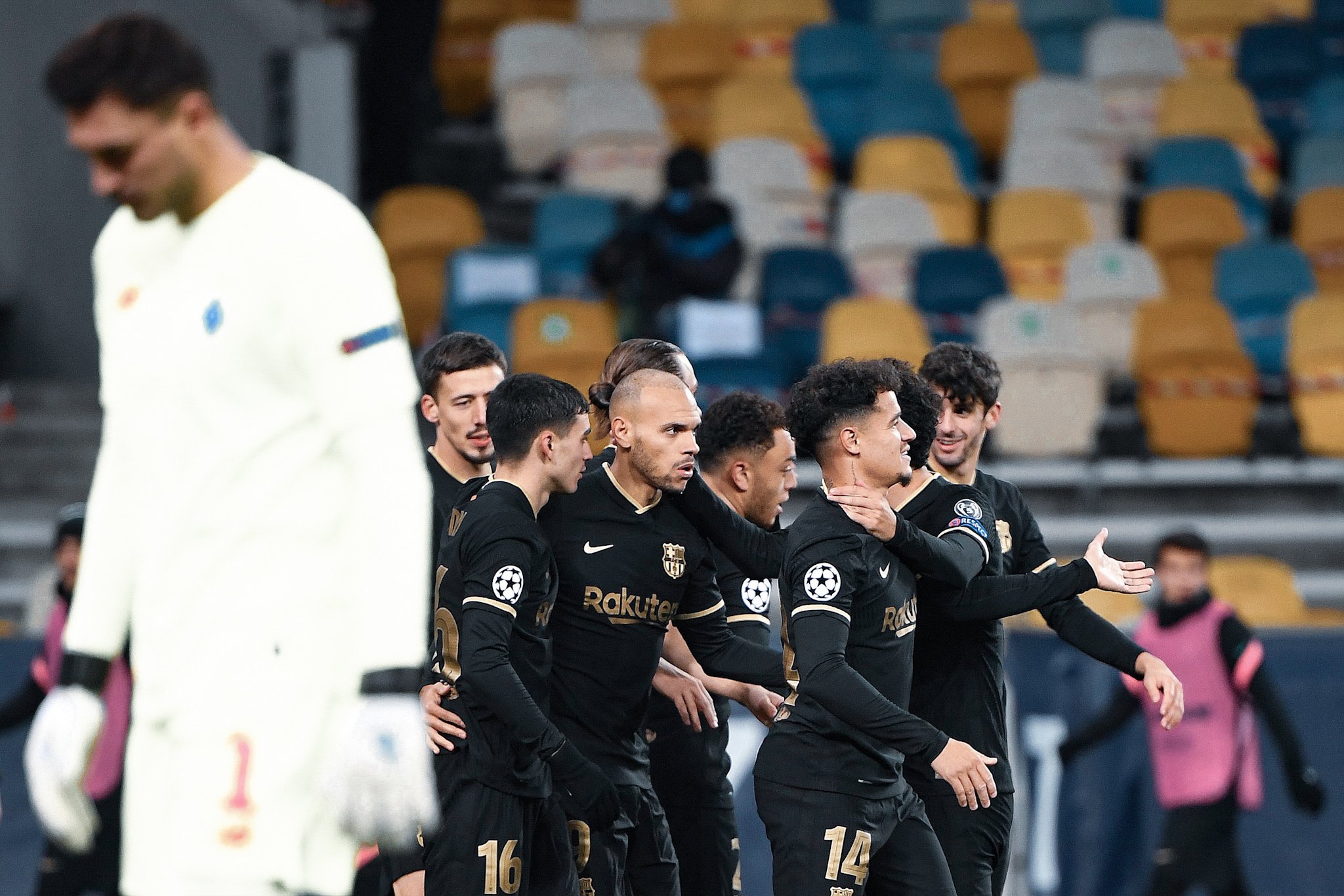 Four wins in four games. Barcelona are cruising in their Champions League group, as they do every year. A second-string Blaugrana side, one that did not feature any of the four captains, was enough to tear down Dynamo Kyiv. The game midweek was not just important for the result in the Champions League but so many players on an individual level.

Carles Alena bossed the midfield with impeccable accuracy. A promising debut from the underrated Oscar Mingueza, desperately needed minutes for Riqui Puig. A performance from Martin Braithwaite and Sergino Dest that found them in the UCL Team of the Week!

Yet, the season seems to be sinking. The league seems to have slipped away even before its midway point. Injuries continue to damage even the existing fine line of hope. The bleeding must stop, but it just doesn’t seem to happen.

The Catalans have not had a worse start to the domestic season in the past two decades. Could the game against Osasuna augment that ray of hope, no less on the club’s 121st birthday?

Los Rojillos sit level with Barcelona on points, having played nine games so far to the Catalans’ eight. Three wins, two draws and four losses see them sit at 14th, just one place below the hosts.

The last time the two sides met at the Camp Nou was the only scar in Barcelona’s otherwise unbeaten home streak. It is a game that one remembers vividly. A last-minute goal from Kike Barja helped the visitors run away with three points, and put at end to Barcelona’s misery in the title race. If anything, it is a reason for Jagoba Arrasate to be enthusiastic for his return to the Catalan capital.

Arrasate has largely deployed a 4-4-2 for Osasuna this season, with Ante Budimir and Enric Gallego the usual starters in the attack. In defence, however, they have played a 5-3-2, echoing the side that played Barcelona at the Camp Nou last season.

Jon Moncayola has played as the deep midfielder, often slotting in between the centre-backs to assist in defensive responsibilities. One immediately associates Osasuna with their sturdy mid-block. They do not unnecessarily commit men forward for attack nor pressing.

Instead, Los Rojillos outnumber the opposition attack in their own half, and the five-man line leaves no spaces for the opposition to exploit. When this forces the attacking side to commit more men forward, Osasuna strike on the counter. In particular, advanced fullbacks easily fall prey to their ploys with large spaces left vacant behind them to be exploited.

Arrasate’s side thereafter looks to capitalise by their potent switches in play, and dangerous cutbacks from the wings. Indeed, it is a style of play that Barcelona have struggled to deal with in past years. With so many injuries in defence, it will be an uphill task for the Barcelona backline to hold off the rampant counters.

After being handed the captain’s band midweek, Marc-Andre ter Stegen will be back in goal at the Camp Nou.

In defence, however, Koeman surely has his reasons to panic. Gerard Pique, Sergi Roberto and Ronald Araujo are not available owing to injuries, and the Dutchman finds himself in a fix.

Frenkie is expected to start, even if it means playing as a centre-back. (Photo by Eric Alonso/Getty Images)

In central defence, Clement Lenglet will likely partner Frenkie de Jong. The dutch-protege enjoyed a day off on Tuesday as Koeman did not call his up to the squad. It will be a tricky pairing, but one tried and tested in recent weeks.

Given Sergi Roberto’s injury and Dest unlikely involvement in Sunday’s clash, Oscar Mingueza might start at Right-back. Unquestionably, it will be a new challenge for the youngster. Yet, not one beyond his capability.

At left-back, One expects Jordi Alba to return to his starting position after being rested against Kyiv.

Sergio Busquets is expected ahead of the clash, yet it may not be wise to let him start immediately. A performance like the one against Kyiv demands a follow up for Carles Alena. The La Masia graduate could start alongside Miralem Pjanic on the night.

The wingers will likely continue to be the same as the Champions League clash. Ousmane Dembele could get yet another start in his natural position-right wing. Pedri, whose stocks are rising by the day, could start on the left side in combination with Jordi Alba. The newly-turned 18-year-old’s vision and composure on the ball will be crucial to breakdown Osasuna’s air-tight defence.

As the no. 10, in between, the two wingers would likely be Lionel Messi. After getting a much-deserved rest against Kyiv, one hopes that the talisman finds his magic back. It has been a tough 48 hours for Leo, and he will be itching to put up a tribute performance in honour of his legendary national team icon — Diego Maradona

One can expect Messi to give a tribute to the late Diego Maradona today. (Photo by Gonzalo Arroyo Moreno/Getty Images)

In attack, Antoine Griezmann is the natural option after being rested in the last game. However, the Frenchman needs to up his game, because Martin Braithwaite is knocking at the doors as a potential starter as centre-forward.