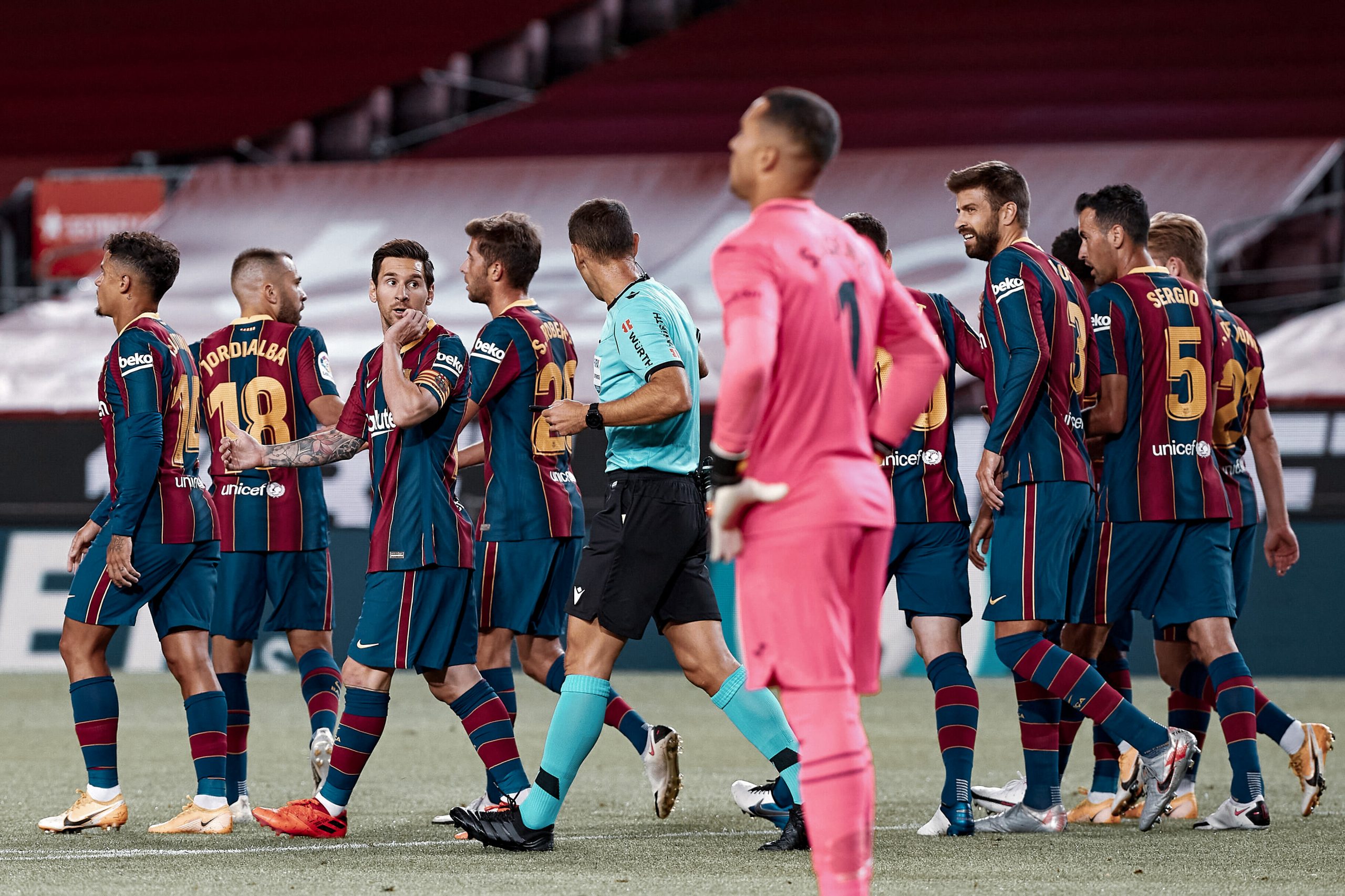 Challenging weather, a tricky opposition, a red card, Barcelona’s second game of the season was anything but easy. The team came out with flying colours, with an impressive display despite being down a man. It is surely too early to judge, but Koeman seems to be winning hearts across the world. For the first time in years has the team not relied on individual brilliance to secure points. The relentless press when off the ball is refreshing, and timely substitutions are a cherry on the top. However, what sets a good and a great manager apart is how they respond when the team is down. And Koeman might be put to the first of many such tests on Sunday night when Barcelona take on Sevilla at the Camp Nou.

What to expect from Sevilla

Sevilla is a club synonymous with character passion and fight. Over the years, they have not only competed fiercely with Barcelona and Real Madrid but also dominated the Europa League, of which they are yet again the defending champions. Julen Lopetegui has lost important players in Ever Banega, Simon Kjaer and Sergio Reguilon. Nevertheless, his squad has seen valuable additions in Ivan Rakitic, Suso and Marcos Acuna.

As has always been the case, the fullbacks are the major source of attacking threat for Sevilla this season too. Captain Jesus Navas has led the way in creating chances on the right-wing. In the matchday 4 victory over Levante, Navas had 9 crosses with 4 key passes and an assist. With Lucas Ocampos ahead of him preferring to cut into the central areas, the duo forms a deadly combination. The left flank is no less threatening, with Sergio Escudero occupying quite an advances position for a fullback.

Given the fullbacks play highly advanced positions, Lopetegui has opted for 1, sometimes 2 midfielders to play a defensive part alongside the centre-backs Diego Carlos and Jules Kounde. The midfield options are extensive, however, Fernando and Rakitic are expected to start with the former in a more defensive role. The third spot could be filled in by Oliver Torres or Joan Jordan.
The attack for Lopetegui has usually involved 2 wingers who prefer to cut in, possibly Suso and Ocampos. As the target-man, the coach may opt for Luuk de Jong who can prove to be a massive aerial threat.

Sevilla under Lopetegui has been known for its high press. The team prefer to keep the ball, setting up a clash of similar styles against Barcelona. The last time the 2 sides faced off at the Camp Nou the visitors deployed heavy man-marking, thereby putting pressure on every player. Barcelona’s central defenders and the defensive midfielder, in particular, were the epicentres of Sevilla’s press, forcing de Jong to lose the ball often.

Things will be different when the heavyweights face off again because such an approach would be difficult to operate against Koeman’s double pivot system. However with the fullbacks tasked more defensively, The Dutch manager will have to look for alternate options to generate attacks. While the wingers will be crucial to generate attacks, they also need to function as the first line of defence. Given the weight of the clash, Koeman will not look to make wholesale changes.

Lionel Messi will once again be the spearhead with Ansu Fati to his left and Coutinho behind him. Fati can be a real menace for Jesus Navas and would be the best hope of pinning the Sevilla captain behind. Coutinho will have to deliver again if Barcelona is to create any openings in the centre. With all credit to his off the ball movement and importance, Koeman should look for options beyond Griezmann on Sunday night. His central positioning may create a weakness in Escudero’s niche, thereby forming a centre for the origin of counters. Both Dembele and Trincao would be great options, but given the cloud over Ousmane’s future, expect Trincao to get a first start.

In midfield, one would expect Frenkie de Jong to start once again. However, Miralem Pjanic would be crucial against Los Palanganas. The advanced fullbacks provide the right stage for the Bosnian to display what he is capable of. His impeccable ability to link with the wingers over the top could be a source of many worries for Lopetegui.

Despite the arrival of Sergino Dest, it would be surprising it Sergi Roberto does not start the game. After a great defensive display against Celta, there are few doubts. His role, however, will depend on whether it is Trincao or Griezmann who starts. If it is the Frenchman, things can get tricky for Roberto. Expect Jordi Alba to get another start this season, with full credit to his displays so far. He will be largely under the spotlight however, going head to head against Jesus Navas.

Clement Lenglet’s suspension leaves no suspense as to who will start. The thin squad means that Ronald Araujo will get his first start of the season alongside Gerard Pique. Though Lenglet’s long balls will be missed, the Uruguayan’s imposing aerial dominance could be a blessing in disguise. The game will undoubtedly witness relentless attempts to find the head of Luuk de Jong, but Araujo and Pique might just be the best combination to tackle it. In goal, undoubtedly it will be Neto Murara once again after he has maintained 2 clean sheets in 2 starts this season