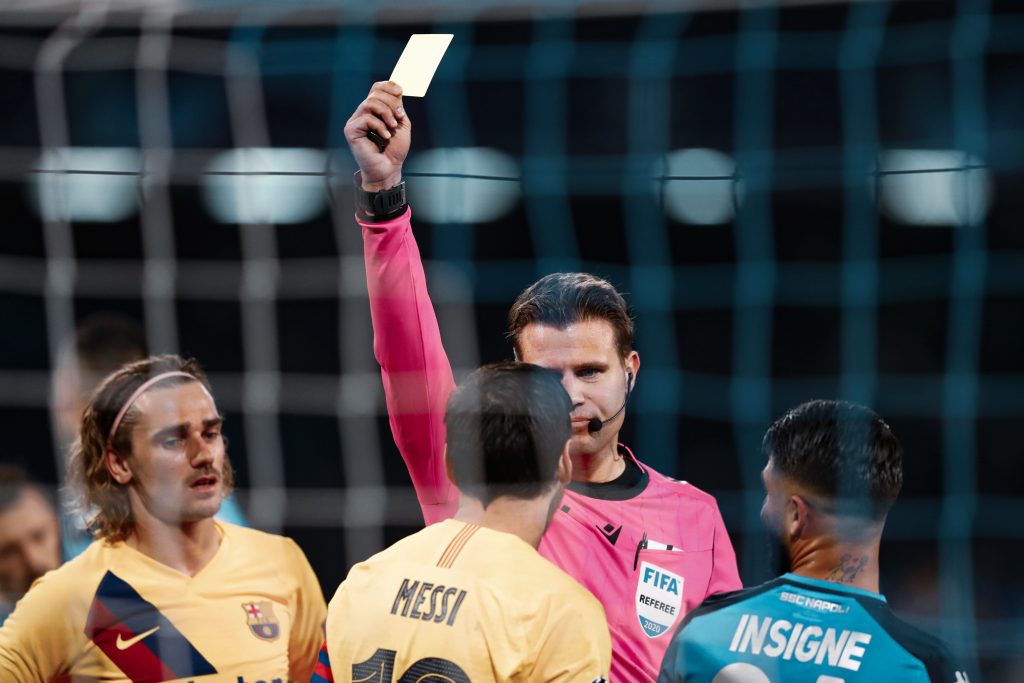 Napoli visit the Catalan capital for the return fixture of the round of 16 clash in the UEFA Champions League. Barça have an away goal to their name, though do have some big names missing. With such a crucial clash looming, here is how Barcelona should line-up against Napoli.

Three hundred and sixty minutes. That is how far Barcelona stand from the glamorous silverware that has evaded them for years: the Champions League. Consequently, these four games will be several notches above the matches the Catalans have played in the recent weeks, not just in football quality but in the passion, the drive and the sheer determination they demand.

However, in order to get their ticket to Lisbon and the quarter-finals, the blaugranas must first come up trumps in a rather tricky encounter against SSC Napoli. For this key encounter, Quique Setién is without midfield duo of Arturo Vidal and Sergio Busquets, who miss out due to suspension. In some positive news, Clément Lenglet and Antoine Griezmann are expected to be fit for the clash. Ousmane Dembélé and Ronald Araújo too have resumed complete training, but the former hasn’t made the squad list for Saturday’s duel. With the stakes so high, this is how Barcelona should line-up against Napoli:

To say that Ter Stegen has been immense for Barcelona would be an understatement. The official confirmation by the club president Josep Maria Bartomeu that the German will indeed renew his contract brought a sigh of relief to culés across the globe. With his contractual status heading in the right direction, Ter Stegen will want to keep his performances at par or even higher. He has conceded less than a goal per game and averages more than three saves per game in this season’s Champions League. He will be a certain starter in the XI.

Piqué was one of the players that enjoyed the added luxury of not participating in the ultimate league clash against Deportivo Alavés. After a stellar yet underrated run in La Liga, Piqué will be keen to carry on his form. Napoli are known for the pacy flair in their game, and a stern test awaits the Spaniard in the final fixture at the Camp Nou.

The final league game against Alavés provided the team with the last thing it needed: an injury to the starting centre-back. Despite the scare, however, Clément Lenglet now seems set to feature yet again in the key clash on Saturday. His positional awareness and composure will be key against the tricky attack of Napoli featuring Dries Mertens and José Callejón, amongst others.

The Barcelona defence will need to be very careful with Napoli’s talented attack, since one goal from Gli Azzurri could be troubling for Quique Setién’s men | Photo by Francesco Pecoraro via Getty Images

Attacking threat or defensive stability? This is a dilemma that often bothers managers in return fixture games particularly. As important as it is to score goals, preventing the opposition from getting those crucial away goals is of paramount importance. A glance at the wing play of Napoli provides more than reasonable backing for Quique Setién to play Nélson Semedo ahead of Sergi Roberto. The threat and possible return of Insigne would mean that defensive stability holds the key in this game.

Jordi Alba has been hot and cold since the restart of football. Defensively as reliable as ever, his attacking presence has been on and off in flashes. If Barcelona are to break down the disciplined defensive lines of Gennaro Gattuso’s men, Alba will have a key role to play in it. One of the first names on the match sheet for Quique Setién without an ounce of doubt.

The absence of Sergio Busquets and Arturo Vidal presents an acute scantiness of physicality and experience in the midfield. That also means there is an added burden of responsibility on the shoulders on Iván Rakitić. One might expect Frenkie de Jong to get the nod for the deepest of the three midfield roles, yet it seems more likely to be Rakitić that will feature in that role. After all, the Croat has produces some great displays in that position since the restart of the league.

After almost a month out injured, De Jong once again featured for the blaugranas in the final matchday against Alavés. The Dutchman has not had a lot of match practice in recent weeks but fingers crossed that he can turn up match fit on Saturday night. Arthur Melo‘s reluctance to return to the Catalan capital added with suspensions almost guarantees that De Jong will start. His dribbling, agility and awareness on the ball will be crucial in winning the midfield battle.

“If I speak about my performances, I could have done much better this year. I don’t think I have played many bad games, but I haven’t been able to have a run of really good games, either. I think I have been OK, but not good enough”

The controversial departure of Arthur Melo was met with a lot of criticism. They say every cloud had a silver lining, and in this case, it was the rise of Riqui Puig. The La Masía starlet has been phenomenal in every second on the pitch for the Catalans. His introduction assures a massive boost in the verticality of play, and his constant tracking back is a bonus. Every possession play-based team requires a player with a cutting edge: an ability to break opposition lines. And that is exactly what Setién will hope to get from Puig on Saturday night.

“Riqui Puig is just 20 years old, but he is more than ready to make his Champions League debut”

Quique Setién
in the pre-match press conference before hosting Napoli

Leo Messi. The talisman, the maestro and one man once again under the spotlight. Messi’s comments after the defeat to Osasuna made headlines for a variety of reasons. He spoke extensively on how he feels the team need to improve dramatically to stand a chance in the Champions League. And like always, he will be looking forward to letting his magical feet do the talking once again. While he is only one booking away from missing the quarter-finals, he will need to be careful as there is no way Messi doesn’t start this game.

“I said a while ago continuing as we were it would be hard to win the Champions League and it’s not been enough to win La Liga. And if we don’t react and make changes we will not beat Napoli”

Lionel Messi
after the 1–2 loss to Osasuna

When it looked like he had hit the lowest of lows, Griezmann found a way to spring back. The change in formation did wonders for the Frenchman. He was visibly more involved in the buildup and had key contributions in match-winning moments since that fated game against Atlético de Madrid. An initial set of reports did say that Griezmann was not in plans for the starting XI with a 3–5–2 in Setién’s mind. Nonetheless, more recent reports do suggest that he could very well be back in the plans from the first minute.

Suárez’s struggles in the Champions League have made headlines for years now. This season too, the Uruguayan has come under immense criticism. After the procedure on his knee earlier in the year, his contribution hasn’t been the same. Despite the overall decline in his finishing, he still scores some absolute bangers. Against Napoli too, Setién will be hoping for more of the same. His chemistry with Messi not only maximises the Argentinian’s game but also provides a generalised sense of cohesion. His name will be the name to round up the match-sheet.