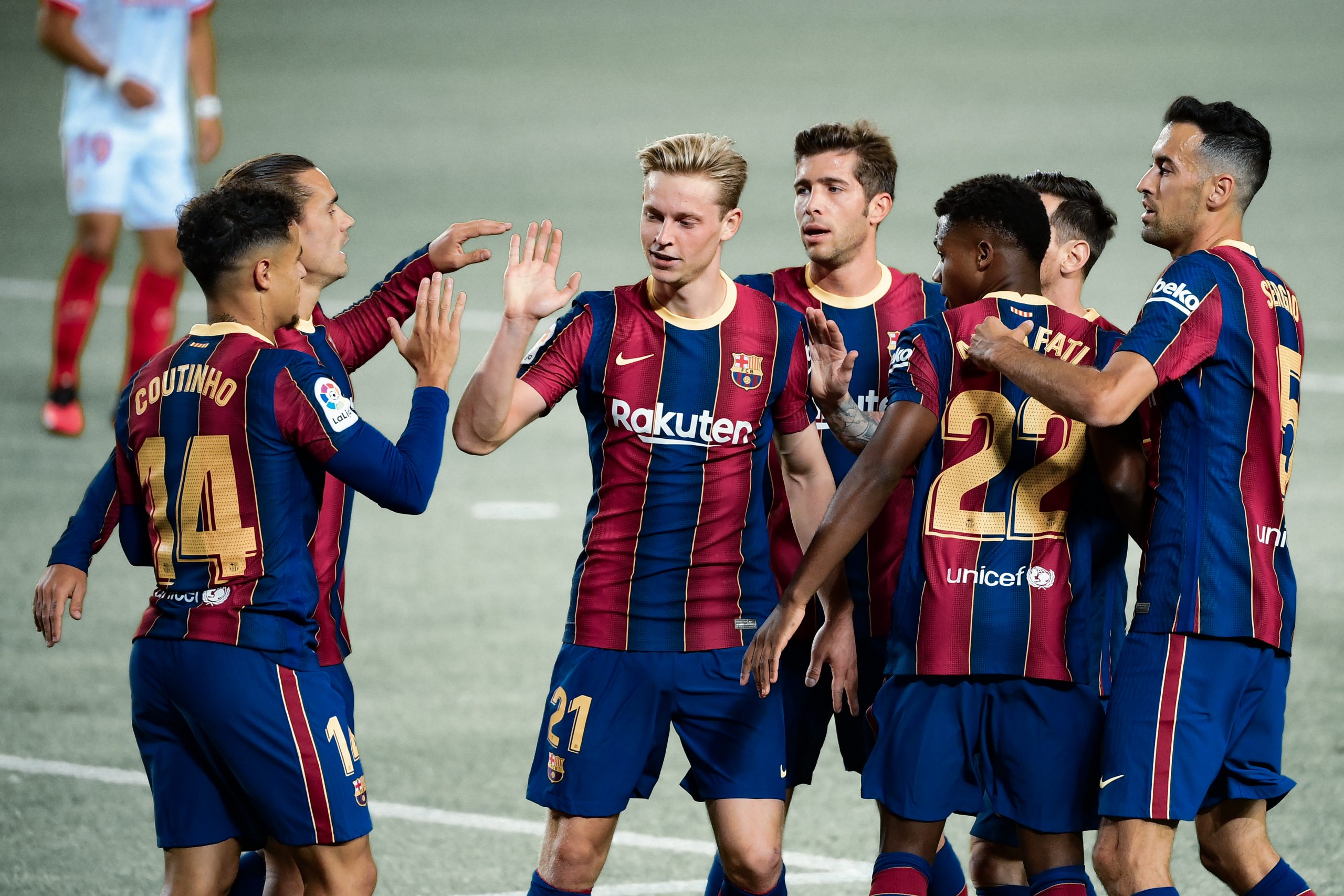 “Sometimes, you have to get knocked down lower than you have ever been to stand back up taller than you ever were”

Come Tuesday night, Barcelona step into a Champions League clash for the first time since the debacle that annihilated them. That performance, that humiliation, that shattered confidence undoubtedly still runs feebly across the back of every Blaugrana player’s conscience.

The mighty Barcelona that once dominated the world had yet again fallen, not just meekly, but shamefully in a knockout match. The chokers tag that intimidated them before the game came back for another bite of flesh. Without a speck of doubt, it was rock bottom.

Barcelona must forget the distant disastrous memories of Lisbon. (Photo by MANU FERNANDEZ/POOL/AFP via Getty Images)

However, life is always full of second chances. Football is a game synonymous with redemption. Every new season harbours with it a chance to fix things right—the opportunity to stand up once again and climb higher than you ever were. And Barcelona hope that Tuesday will be the start of a special run, one that begins right at the Camp Nou.

The opening clash features the Catalan giants take on the Hungarian champions Ferencváros. The Hungarians are unbeaten in the league so far, with four wins and a draw to their name. Ferencvaros have netted 12 times in their opening five encounters, having conceded just the three. And on the blue corner, we have Barcelona, who are coming off the back of their first defeat of the season. The Catalans have dropped points in their last two clashes and will be raring to make amends.

What to expect from Ferencvarosi?

After failing to qualify for the Europa League in 2018, Ferencvarosi announced the sacking of their manager. The club named Serhiy Rebrov the new man at the helm soon after, and a new era began. This followed a failure to win the domestic league for two years, Rebrov led the side to the title in his first season.

Things just got better for the Budapest outfit as they went on to defend their title in 2019-20 too. However, the biggest achievement for Serhiy was undoubtedly the Champions League qualification. It was a gruelling run, with tough sides including Celtic and Dinamo Zagreb challenging them for a spot. In the end, a fascinating two-legged tie against Molde saw Ferencvaros secure a spot in the UCL after 25 years.

Rebrov has done a fantastic job with his team in the recent past. (Photo by NIKOLAY DOYCHINOV/AFP via Getty Images)

Rebrov has preferentially stuck to a 4-2-3-1 during league games. However, they have moulded at times to a 4-3-3 during UCL clashes. Surprisingly, the team does not have too much wing play, something well associated with a 4-2-3-1. That said, while they can be lethal on the counter, they prefer to hold possession.

The buildup is usually central, with long balls being an ace up their sleeve. Of the two wings, the left is usually the more exciting one. They are not a side that likes to terrorize the opposition, rather preferring a conservative approach repeatedly. This is evident in their statistics from the Europa League, with under a goal averaged per game. The conversion rate, too, has not been as fierce as they would have hoped, but what matters is that they always get something over the line.

Tokmac Chol Nguen has been a menacing weapon for Rebrov on the left-wing. Though he does prefer to drift inside and operate in the halfspaces, his connection with midfielder Somalia and the fullbacks opens up activity on the flank. The Norwegian has already racked up four goals in as many starts in the League. Franck Boli is the manager’s second trump card in the attack. The full-backs are not extensively involved in the drives and tend to stay rather deep.

If there is one thing the Champions League has taught us over the years, it is never to take the opposition lightly. Every season brings with it new upsets. Teams from lesser-known leagues may not have the popularity or fame, but what they do have in abundance are confidence and determination. Heading into the clash as the underdogs helps them unlock a new stratum of freedom. Though Ronald Koeman’s focus will primarily be on the El Clasico and the mega-challenge against Juventus, he cannot afford to take Ferencvaros for granted.

Undoubtedly Koeman will require the right balance of prophylaxis and caution. Rotations will be undoubtedly necessary, however, not blown out of proportion. With the Clasico lurking just around the corner, this could be the best chance to rest Lionel Messi. Given that Antoine Griezmann is visibly low on confidence, Martin Braithwaite may be the ideal option as the #9. His work rate will be crucial to implement Koeman’s high press.

Ousmane Dembele should be provided with another run in the park on the left-wing; not only will it help him gain match fitness, it will help keep Fati fresh for the weekend. Fransisco Trincāo could earn his first start of the season on the right-wing, adding dynamism to the wider areas.

Given that Ferencvaros are overloaded in the centre, going wide seems to be the right way forward. After an impressive showing against Getafe, Pedri could well earn his second start of the campaign. His role in the centre will be crucial if Messi is rested, as he will be in the limelight for providing the creative spark.

The dying moments of the last game witnessed Koeman field a team with a single pivot for the first time. However, the Dutchman will be looking to stick to his basics with a double pivot. After not featuring against Getafe, Miralem Pjanic could be his first start in the famous garnet-and-blue. Alongside him will undoubtedly be Frenkie de Jong who still quite hasn’t set the season on fire, but has shown promising signs. The duo will be crucial to cut off the likes of Boli and Nguen from the midfield.

Since playing wide is the way to go, the fullbacks will be crucial to extract maximum productivity of the wings. Given the dire shortage of options, one would expect Sergi Roberto and Sergino Dest to hold onto their starting roles. Dest put up a particularly impressive display on Saturday despite being played out of position. He will certainly get a deserved start at left-back once again, this time in the Champions League.

Tomorrow might be the best time to rest Messi and Pique. (Photo by Alex Caparros/Getty Images)

Much like Lionel Messi, this might be the best time for Koeman to give Gerard Pique some breathing space. With a congested schedule ahead, Araujo could replace him in the line-up alongside Clement Lenglet. The Uruguayan has proved to be reliable, and could well get Koeman’s nod to start. In between the sticks, Neto continues to impress with every passing game and will be looking forward to his first Champions League start of the season.