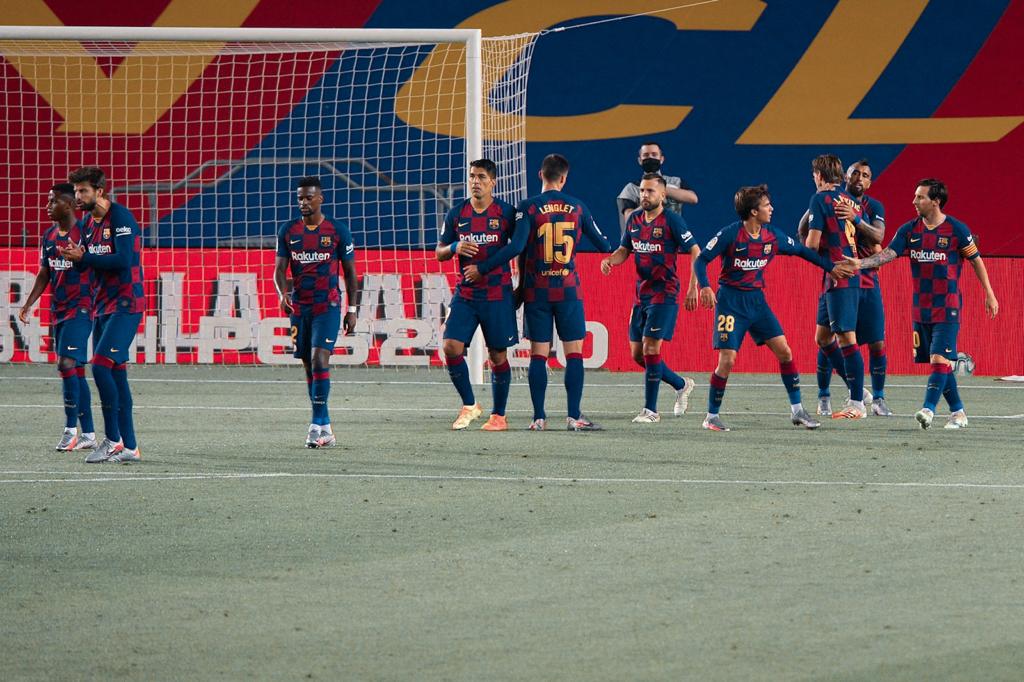 After Barcelona sealed a hard-fought 3 points against Athletic Bilbao, they now go up against Celta De Vigo away from home in what promises to be a close encounter. To emerge successfully, Barcelona should use the following line-up against Celta Vigo:

The upcoming clash would be a big test for Ter Stegen, however, the German has consistently maintained composure in goal and has recorded a remarkable 5 clean-sheets in a row. Once again, he would be an unquestionable pick for the Blaugranas, who’d be looking to expand this uncommon record.

Considering Gerard Piqué has played every game so far and is likely to be suffering from fatigue, rest for the veteran would by no means hurt Barcelona. The Azulgranas face Atletico Madrid next and would require Gerard to be at his daunting best. After a surprisingly successful debut against Mallorca, the young Uruguayan, Ronald Aruaújo, could help marshall Barcelona’s backline in Piqué’s absence.

Although French international Clément Lenglet has also received his fair share of minutes, due to the fact that he was suspended in his first game, the 25-year-old would still have some gas left in him to start the immense fixture against Celta De Vigo. Added to that, he has looked in terrific form as of late, not showing any signs of exertion or weariness.

Sergi Roberto’s successive exclusions mean Nelson would once again be given the task of handling the right-hand side. Despite often being linked to a move away from the Camp Nou, the Portuguese has undeniably been a crucial figure at the back, not only displaying tremendous awareness but also improving his decision making moving upfield. Semedo’s spot seems to be guaranteed.

After putting in continuous valuable performances, Setién would consider Jordi Alba’s inclusion as a no-brainer. The Spaniard has been lively, energetic, and influential on the field. If Barça intends to pose a threat in attack and seek another clean sheet, an Alba masterclass would surely be required.

Currently suspended for the game, Sergio Busquets will be unable to feature in this high magnitude encounter. Nonetheless, this provides the veteran to get some much-needed rest and Ivan Rakitic to feature in the starting XI. Since Frenkie De Jong is also absent from the squad list, Rakitic’s services from the base of midfield would most likely be seen in action. The Croatian had an applaudable display a couple of days ago and will be anxious to continue proving doubters wrong.

Given the fact that Arthur Melo has been involved in a potential transfer to Juventus, starting him might not be ideal for the club. The Brazilian may not be in the right frame of my mind, and also has been poor in accordance to his standards, which undoubtedly paves way for the Chilean, Arturo Vidal. His energy and dynamism could, as always, give the Catalans a much-needed edge.

The inclusion of Riqui Puig in a game of this stature would typically be considered as a gamble, but after the youngster’s mesmeric performance at the Camp Nou recently, he’d be a vital addition. Along with bringing energy, enthusiasm, and desire on the field, he is remarkably calm with the ball at his feet, which makes him a strong contender to be part of the Barcelona – Celta Vigo line-up.

Barcelona Captain is yet to unleash the beast hidden inside of him but has been crucial in all previous conflicts, contributing heavily to the scoreline. For Barcelona to emerge victoriously, Lionel would be yet another no-brainer for Quique Setién’s side.

With Luis Suárez and Griezmann unable to make a prominent impact upfront, only one man’s addition makes sense, and that is Martin Braithwaite. The Dane forward was illustrious on his return to football and has been working tirelessly to earn a spot in the line-up. Along with his work ethic, his knack for scoring goals would help Barcelona seal the win.

To summarize Ansu Fati’s performances this season, one could easily refer to three words: Flexibility, eagerness, and assurance. The 17-year-old boy has been a vital member of the first team this season, especially in these last couple of weeks. He produced a game-changing performance against Leganes and brought an instant improvement to the game after being substituted against Athletic Club, providing width and taking on defenders with persistence. Griezmann’s grieving performances at left-wing should easily allow the youngster to start this fixture.