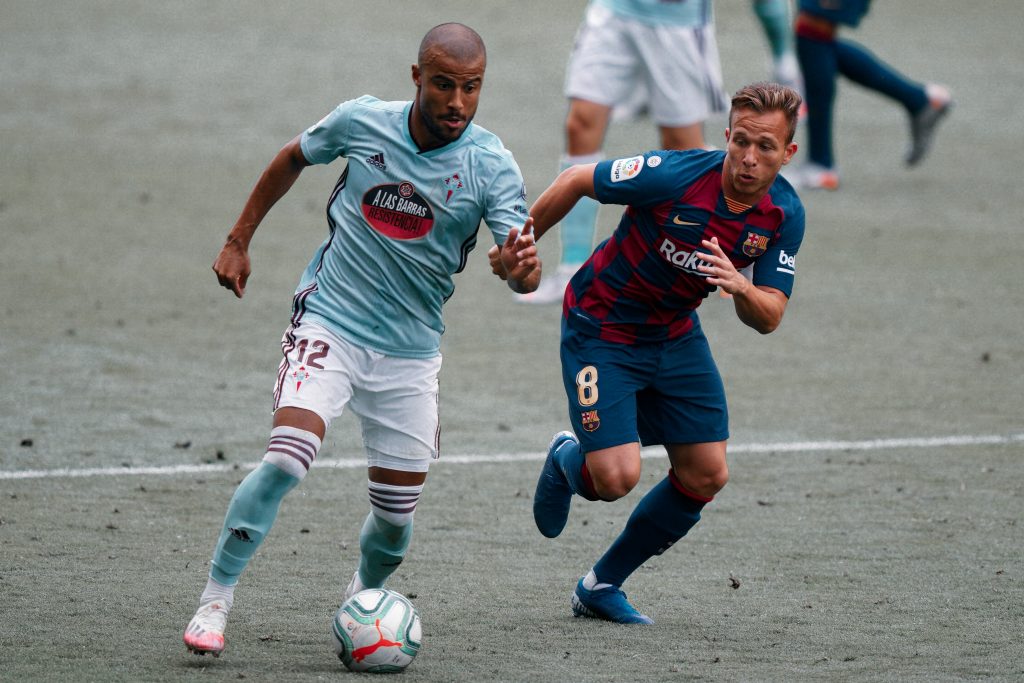 Reality finally seems to have hit Barcelona fans in the gut. They have had a week full of distress, starting with Messi turning 33, to Arthur Melo’s move to Juventus almost being confirmed. The draw with Celta de Vigo yesterday didn’t ease their emotions in any manner whatsoever. But, as the transfer of Arthur to Juventus is virtually confirmed, how should Barça use him until the season ends?

The Barcelona board continues to receive severe slander from the fans across all social media platforms for their most bizarre transfer activity. There are numerous reasons why they are disappointed with Arthur Melo leaving to Juventus, and at this point, it requires no elaboration. With the swap deal for Miralem Pjanić going through for sure, there is now a need to discuss what’s next for Barcelona.

Situation till the end of season

Losing Arthur Melo within two seasons is a massive blow, but nothing can be done about that. Instead of lamenting over spilt milk, the Catalans should aim to use the best out of him for the remaining games. The draw with Celta is a clear implication of the fact that manager Quique Setién hasn’t figured his best XI yet. Since the restart, the azulgranas have faltered twice, against Sevilla and now former Barcelona player Óscar García’s célticos.

Real Madrid is now in the driving seat, and a win against rock bottom RCD Espanyol de Barcelona will put a two-point gap between the top two. Setién’s men can’t afford to slip beyond this as it would be impossible to close a wider gap considering how well Los Blancos have been playing lately. And so, the Spanish tactician will have to resolve the various loopholes that the opposing sides have been exploiting, one of them being the midfield’s sludginess.

From a long term point of view, Arthur leaving the blaugranas is bound to hurt the club. But rather than lamenting over the unchangeable, they must now focus on the title race that’s ahead. The Brazilian is still available for Setién to use till the end of the season. A player like Arthur can always be counted on even if his future no longer remains at the Camp Nou.

Even though Setién has the option to use Arthur in the remaining games, it’s unlikely that he would play him for lengthy periods. Since Melo isn’t going to stay beyond the season’s conclusion, the manager might think it’s better to work on the future. With Riqui Puig emerging as a promising talent, he might be inclined to integrate the 20-year-old with the first team.

Instead of playing Arthur in the midfield, who possibly might no longer even have his head in the game, Setién could be thinking of altering the midfield combinations. The Brazilian came on in the 86th minute against Celta for a brief cameo. And this could be the sign of things to come. The 23-year-old could be deployed into restricted roles with limited game time. As much as it may sting, one can’t blame Setién if he doesn’t choose to play Arthur anymore because he must have an eye on the future.

That being said, Arthur Melo is a fantastic player who is capable of providing a calming presence in the midfield. At his best, Arthur can impose himself into the patterns of play and ensure that the game is under control. His ability to resist the opposing press and retain the ball makes him close to impossible to dispossess. There is a reason why Barça fans rate him so highly, as he has changed games on several occasions in the past.

Setién might have a selection headache in the coming days. Not using Arthur when he is tactically needed for the game might not go well with the fans. Notwithstanding, on the same lines, working on establishing a more long-term midfield combination is in no way wrong. Either way, Setién is bound to receive criticism. If he plays Arthur regularly, the fans who have an eye on the future will question his lack of farsightedness. But if he doesn’t use him at all, then he may be branded as stubborn for not bringing on a competent player like Arthur to change the game.

What should Arthur do?

At this point, it’s evident that the former Grêmio man is being pushed out by the board. Although he never thought of anything aside from succeeding at the Camp Nou, he is being discarded as unimportant. Nobody can blame him for being frustrated with the club who he considered as a “dream to play for”.

But now that his move to Juventus is nearly completed, he must look ahead to a bright future. Even if it’s not at Barcelona, Arthur possesses the qualities to succeed as a player. With a project that gives him more value, Melo can shine as a bianconerri. But before that, he might have something to prove to the current regime.

President Josep Maria Bartomeu and the fellow board members are so short-sighted that they can’t see how good of a player they’re letting go of. With the Catalans running behind immediate success, the signing of Miralem Pjanić seems to be a question mark. But prior to the Bosnian’s arrival, there is still a crucial title race and the Champions League to play for.

Arthur must keep his head up and exit on a high. If the manager trusts him till the end of the season and plays him regularly, he should repay the faith by performing well. He must give his best even though his future lies in Turin. By pitching in match-winning performances, Arthur can show the board that they are making a mistake. There is nothing better than proving the people who let you go that they are wrong, and Melo should look to do the same. If he manages to play an instrumental part in retaining the title, and also potentially winning the Champions League, then he will leave as a hero.

The fans will anyways make noise for the board’s horrendous decision. But Arthur can at least give them a parting gift by showing commitment and highlighting his love for the club that he never wanted to leave.

The ball is in Quique Setién’s court. Playing Arthur is solely his decision to make. Whether it’s a lengthy role or cameos, the number 8 should be involved at any cost because of his tactical qualities and how capable he is. It might not be easy to convince anyone but no matter what call Setién makes, he must stay firm to it. Being swayed by the Spanish media’s stone-cold criticism will only hamper his chances succeeding this season.

The plans for next season can wait for now, with more immediate activities that require tending to. In his own words, there is no margin for error, and the Catalans need to sharpen up. If they continue to get distracted by off-pitch issues, then it would only propel Real Madrid closer to the title. As challenging as it may be, all the parties involved in Arthur’s unprecedented exit must look to provide the best they can till the time to depart eventually comes.