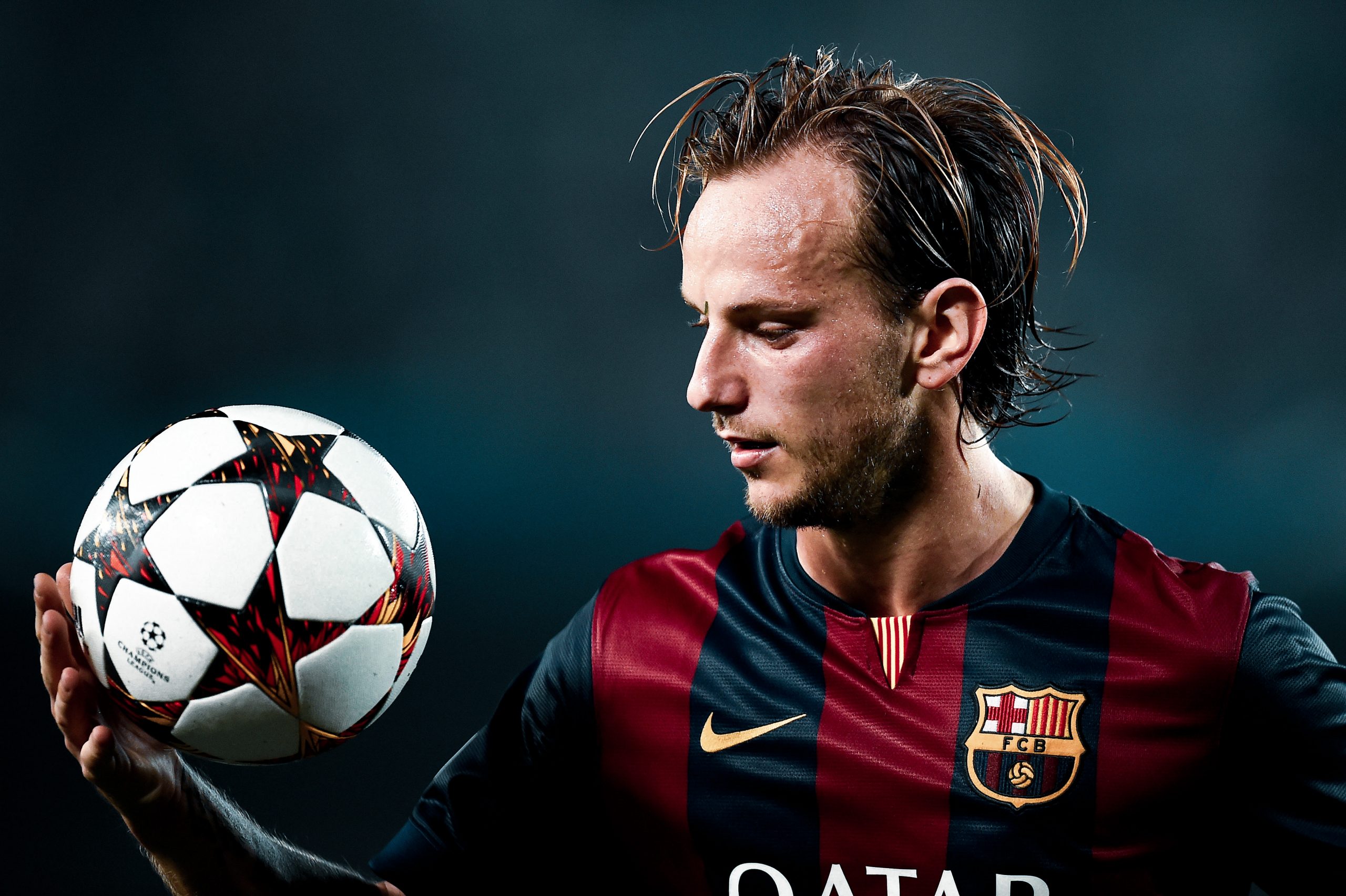 After six very successful years at Barça, Ivan Rakitić now returns to Sevilla, but on a cheap transfer. Did Barcelona time his exit poorly?

How did a player who reportedly attracted an offer of €90 million end up being sold for €1.8 million, plus 9 in variables, roughly 24 months later? How come a club that had a World Cup finalist in their ranks then desperately struggle to move him on for any price two years on?

With a big smile on his face as he came from leading Croatia to a historic 2018 World Cup final, Ivan Rakitić was a man in demand as he returned from the international tournament in Russia. While it was his partner in midfield Luka Modrić who received all accolades as he was rewarded with the Ballon d’Or later that year, Rakitić was not free of praise or offers. In fact, Paris Saint-Germain were desperate to sign him, for they bid €90 million for him. But only one man was more desperate to keep him than PSG to buy him. That man was Ernesto Valverde.

According to Sport, the now-former Barcelona manager considered Rakitić irreplaceable. As a consequence, coach and footballer made an agreement, the ‘PSG pact’ as the same newspaper calls it, to prevent him from leaving. Valverde promised Rakitić that he would continue to be as indispensable as he had been up until that moment, showing him his full confidence by playing him whenever he could. The Croatian was already 30 years old by that time but seemed to be at the peak of his powers. “It was the best of the six I have had here”, Rakitić expressed in April 2020 looking back at his 2018/19 season. “But I was annoyed with how I was treated. I was very surprised and I didn’t understand it”, he added on what came later.

In 2018, Rakitić’s value was at its peak | Photo by Odd Andersen / AFP via Getty Images

Valverde was delighted with Rakitić’s performances in the 18/19 campaign. But such consistent, sometimes unchallenged, playtime already started to anger the fans who never considered him the prototype Barcelona midfielder. The reasons were not just aesthetic: it was not simply that Rakitić did not have the passing finesse of Xavi Hernández, the smoothness of Andrés Iniesta, or the lightness of Riqui Puig. Instead, some holes in his game hinted at a more conservative style that prevented Barcelona from perfectly applying the positional play that is so appreciated in Catalonia.

The lack of awareness, the poor body orientation before receiving a pass, or the limited vision were all justifiable arguments against his regular selections. And such weaknesses were all exposed in the fatal night at Anfield in May 2019. Two actions tragically made the headlines for Barcelona on Twitter that night: Georginio Wijnaldum’s goal that gave Liverpool a two-goal lead, and Divock Origi’s final and Liverpool’s fourth goal after a very smart corner kick from Trent Alexander-Arnold and childish defending from the Catalans. In Wijnaldum’s goal, though, two individuals were critically exposed. The first was Jordi Alba, after a poor control that allowed Alexander-Arnold’s recovery. The second was Ivan Rakitić.

Rakitić did not scan his surroundings and, rather than breaking Liverpool’s first pressing line with a feint and a forward pass or drive, he invited the locals’ press as he compromised Jordi Alba with a sideways pass. That appeared to be the final demonstration for fans that Rakitić did not possess the technical and tactical qualities required for Barcelona’s possessional and positional football.

Ernesto Valverde seemed to realise that too, as the player went from non-transferable to being up for sale. In a rush, Barcelona started negotiating with Juventus and Inter Milan for a transfer in the summer of 2019, but such sale was never completed. Also, Rakitić considered that he was promised a contract renewal by the board, but such extension was first postponed and then ruled out. On the pitch, as the season started and it was confirmed that an exit could not be found, Valverde planned on taking a bolder and more innovative approach for his third season in charge.

After his arrival from Sevilla in 2014, success came early for Ivan Rakitić at the Camp Nou | Photo by Denis Doyle via Getty Images

His more pragmatic tactics had worked out domestically, but it had been demonstrated that the team needed to take a step forward to win the Champions League. Therefore, Valverde intended to apply the more orthodox positional play, with meticulous care for the positions and roles while also allowing fluid and dynamic attacks. Natural wingers like Carles Pérez or Ansu Fati were made starters, Antoine Griezmann was chosen as a more mobile striker, and Frenkie de Jong acted as a lone pivot in the opening La Liga game against Athletic Club. In the preseason friendly versus Napoli and the following league clash with Athletic, the midfield trio was the same: De Jong, Carles Aleñá and Sergi Roberto. Sergio Busquets and Ivan Rakitić, on the bench.

But Barcelona were shocked at San Mamés. The 1–0 loss was followed by several other disappointing results on the road. While at home Barça obtained convincing wins, Valverde shook things up again. Busquets returned to the starting line-up, De Jong moved to an interior role, Aleñá was relegated to the bench and stands almost until his loan to Real Betis in January, while Lionel Messi and Luis Suárez returned from injury, forcing Griezmann to move to the wing. One thing did not change, though: Rakitić waited on the sidelines.

By 27 November 2019, Rakitić had only made one start in the 19/20 season. It was in a 2–0 loss away at Granada. Moreover, he had played roughly 289 minutes in La Liga and Champions League combined. Nonetheless, with injuries and absences, Ernesto Valverde surprisingly chose to start his once trustworthy man in the all-important home duel against Borussia Dortmund in the Champions League group stage. Barcelona won by 3–1, and that was a turning point for the veteran midfielder. He started all following games against Atlético de Madrid, Mallorca, Inter Milan, Real Sociedad and Real Madrid.

On 12 November, before that Dortmund match, Rakitić had been very clear. “How can I enjoy myself? Playing football. How does my youngest daughter feel if I take her toy from her? She’s sad. I feel the same: they have taken the ball from me and I am sad”, he said. “I understand and respect the decisions made by the coach and the club, but I think I have given a lot in the last five and a bit years here and the only thing I want is to be able to keep enjoying myself. That’s the most important thing for me”. Expressing his dissatisfaction, his departure in January seemed clear. But that run of games changed his fate, at least for the next months.

Rakitić ended the 2019/20 season as the 13th Barcelona player with most minutes in all competitions. He played both Champions League last 16 legs against Napoli, and he experienced a renaissance after the coronavirus break. But with everyone fit and available, the Swiss-born player was still not among the eleven starters regularly. With the rejuvenation the squad desperately needed, Rakitić was always going to be one of the first names in the list. His exit has now been certified.

For a star that could have been sold for 90 or 80 million euros only two years ago, being transferred for 1.5 and 9 in add-ons seems a too sharp decline. Barcelona even considered releasing him on a free in order to avoid paying his high salaries. And even when Sevilla will now pay a fee for their former captain, Goal has revealed which are the conditions to fulfil the variables: 3 million are related to the number of appearances and Sevilla’s qualification for European competitions, 1 million in case the Hispalenses win the Europa League, 2 million if they win La Liga, and 3 million if they win the Champions League. Thus, it is most likely that Sevilla will end up paying only 4.5 or 5.5 million euros.

However, it would be foolish to say that Barcelona have done bad business with Ivan Rakitić overall. The player now finds himself at the same club where he was over six years ago, but the period in between cannot be overlooked. Rakitić already arrived from Sevilla as a captain, club great and European winner, but in his move to the Camp Nou he established himself as one of his generation’s best and most successful midfielders.

Indispensable for both Luis Enrique and Valverde, and important for Quique Setién, his versatility, commitment, hard work and all-round profile have been highly appreciated by all his managers.
After 310 games, 36 goals, 40 assists and 13 trophies, including the 2015 Champions League in whose final he scored, Rakitić now makes the way back to Seville as the fourth foreigner with most appearances in Barcelona’s history. Only Lionel Messi, Dani Alves and Javier Mascherano are ahead of him.

Therefore, Wednesday’s farewell ceremony and press conference is the least his now-former club could do for a magnificent servant for the Camp Nou giants. While he has not often been directed the applauses, Ivan Rakitić has earned all culés‘ respect.