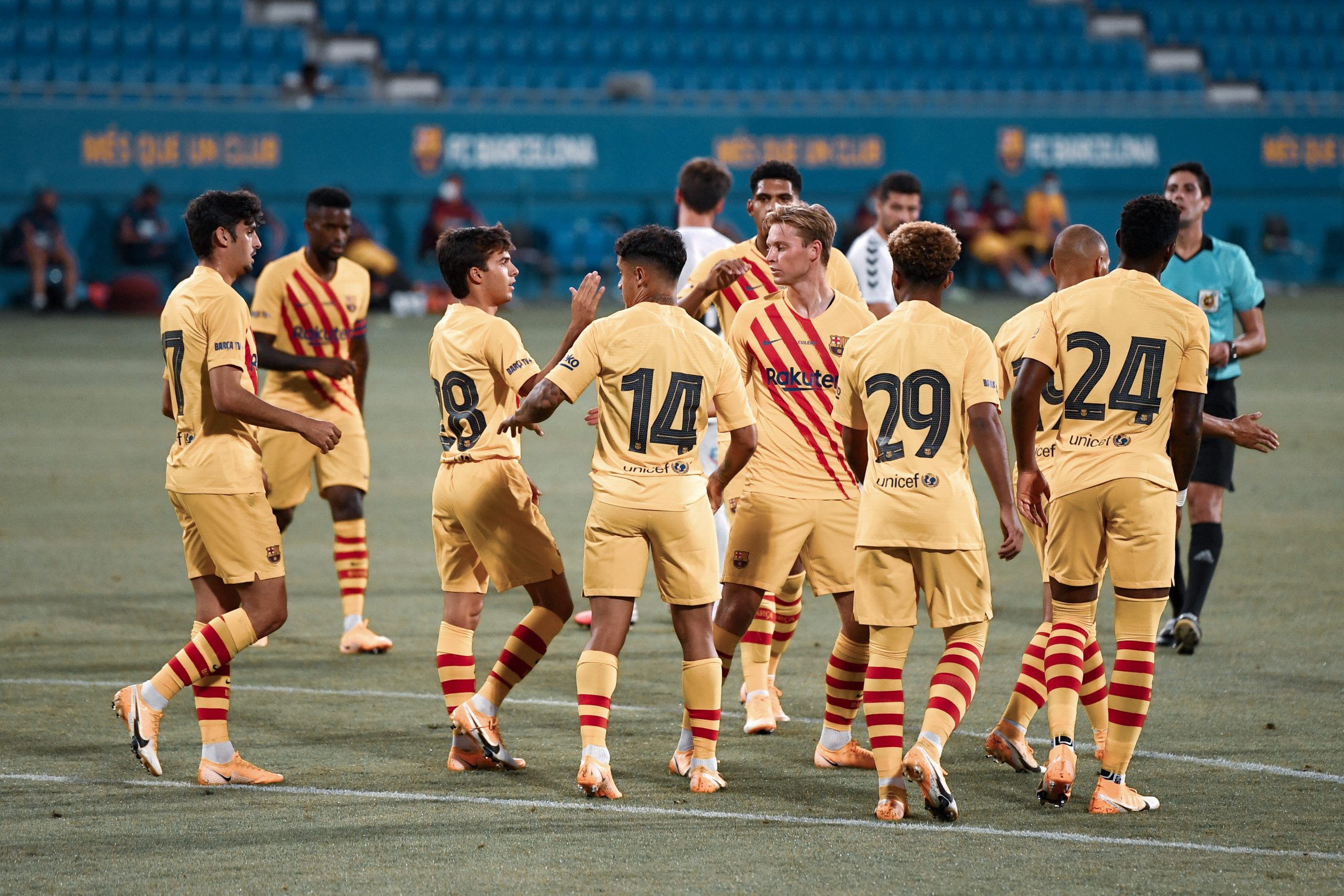 As new Barcelona coach Ronald Koeman looks to shake up his team tactically and individually, a new midfield set-up could be the key for Barça’s success.

As the years go by, football, like everything else in the world, continues to grow, change, and redevelop. The sport, as it stands, has trickled down from a time when the only method to score was to let the quick chap on the wing cross it to the tall, strong bloke in the centre so he could head it home. Well, now the swift man with a rusty beard and number 10 on his back just dribbles past five and bends it into the corner of the net.

These innovations have not been solely on the style of the game, or the rules, but has also seen the emergence, and modification in positions/roles. For example, ten years back, it would have been hard for you to track the use of ‘inverted fullbacks’ in any team until Pep Guardiola started implementing them in his Bayern Munich and eventually with Manchester City. They were invented to create numerical superiority in midfield when holding possession. Similarly, in recent years we have seen a rise in other hybrid positions, one of them being the hybrid 8/10.

During the 2000s, the 4–2–3–1 gained a lot of popularity with the likes of José Mourinho’s treble-winning Inter Milan to World Cup finalists the Netherlands implementing the same. In this formation, the player in the middle, behind the striker is typically referred to as then no. 10 or the attacking midfielder. Its job – while different in different countries and systems – is to add a surplus attacking threat, which can either come in the form of goals (Frank Lampard at Chelsea), or a more creative presence (Mesut Özil at Real Madrid).

Behind them, lies the 8 – the hardworking player who does everything. He can control the speed of the game, run from box-to-box, and steadies the ship for the team. Xavi Hernández, Gareth Barry, Steven Gerrard among so many others are well-known examples.

While the prominence of the 8 remains quite celebrated till date, the use of a natural 10 may die out now that wingers, central midfielders, and even strikers have started assuming a more creative burden in attack while supplementing the defence. This also helped teams cover more areas on the pitch, including out wide and half-spaces. Therefore, the role of the hybrid 8/10, like all others, was borne from changes to tactical culture.

It is easy to spot its implementation in European football since 2013, with prime example during that time being Cesc Fàbregas in Gerardo Martino‘s Barcelona, Toni Kroos in the initial stages of the 2013/14 season under Pep or Oscar at Chelsea. To take a closer look at the role, let us take Fàbregas as an example.

To cope with the absence of an injury struck Lionel Messi, Tata Martino started to move Andrés Iniesta to the left wing. Subsequently, Fàbregas, who had rich history playing across the midfield, was stationed at the left-of-centre of the midfield trio along with Sergio Busquets and Xavi.

Ideally, in a three-man midfield, one player holds, one changes the tempo, and one has to break forward, and Fàbregas was given the responsibility of carrying the ball and adding innovation from the final third. Of the three, he would be the one closest to the centre, and highest up the pitch, often switching positions with Iniesta or the attacker closest to him giving the team more fluidity. The Spaniard would constantly keep moving horizontally before exfoliating his marker before heading forward. His past, playing as a no. 10 for Arsenal in several games, and even as a false 9 for Spain came in handy during this time.

Since then, this type of midfielder has become increasingly popular, primarily because of its utility nature. In recent times, players like Martin Ødegaard, Luka Modrić, Donny van de Beek and Mason Mount have been used in said role. Julian Brandt, however, remains the epitome of this role and has been utilized in that capacity at Bayern Leverkusen and Borussia Dortmund.

For example, during this goal against FC Mainz 05, the German international (circled in black) moves from the right-of-centre orientation to take up a more advanced role than has been left empty by opposition defenders. He is quick to spot Kevin Volland (circled in red) and played a one-two with him before slotting it home effortlessly into the bottom corner.

Additionally, Brendan Rodgers and Peter Bosz have adopted a double 8/10 system in the past where two players are given the hybrid status. The former used James Maddison and Youri Tielemans in a 4–1–4–1 through the course of the last season, while the latter structured Bayer Leverkusen in that arrangement using the services of Kai Havertz and Brandt in 2018/19.

Barcelona have taken a turn for the better after a change of management, relieving Quique Setién of his duties before hiring Ronald Koeman as head coach ahead of next season. The Dutchman has vastly preferred a 4–2–3–1 throughout his coaching career, most recently with the Netherlands national team. And if the preseason friendly against Gimnàstic de Tarragona is any proof, he will continue to use that.

That edifice, though, may not be the best for Barça, because very specific players can thrive in it. It requires a natural no. 9 – one that Barcelona do not have barring Luis Suárez at the moment, who is tipped to leave the club. It will also harm the potential playing time of younger players within the squad like Riqui Puig and Álex Collado, who do not necessarily fit anywhere.

With a midfield as stacked as ours, the 4–3–3 remains the only viable option that can both, complement the fullbacks defensively, and add a threat while going forward. Additionally, by using the hybrid 8/10 role, Koeman can blend his version of the current team and what is best for the club.

The only position nailed on at the moment is that of Frenkie de Jong. Koeman has not shied away from praising the 23-year-old from his time with the Dutch national team, and his role was one of the first things he addressed after joining, stating that he will keep him closer to the defenders. Since de Jong is not a natural placeholder in the defensive midfield role, he will have to be accompanied by a player like Miralem Pjanić who has the defensive and passing capabilities along with just the right amount of athleticism. The vacancy on the left can be filled by Philippe Coutinho as the composite midfielder.

For a significant part of his career, Coutinho played a central midfielder, in the Mezzala role, primarily on the left. This allowed him to rove up the pitch through wide spaces before drifting inwards and trying his trademark right-footed curler. During the two seasons, 2016/17 and 2017/18, in which he operated in said role, Coutinho managed 20 goals and 14 assists over 45 games. He also managed to create 14 big chances while averaging 2.5 key passes per game. It clearly brings the best out of him.

Over the last two years, Coutinho has drastically improved his work rate to fit into Hansi Flick’s high-pressing Bayern Munich and will be at home in a midfield trio. In fact, going back to a deeper position could help him bring some consistency in his career after being shifted continuously from one zone to another. That said, the Brazilian is unquestionably not a winger, and should not, in any circumstances, be used on the left flank again.

Koeman also has the services of a certain teenager, Pedri, who boasts of the capabilities to walk toe-to-toe with the some of the best in that position, including now teammate Coutinho. While primarily an attacking midfielder, the 17-year-old was used a left-winger for a dominant part of last season with Las Palmas in the second division.

Despite his age, Pedri was the primary creator of this team and would drop off as deep as the defensive midfielder before releasing wingers through sharp long balls. He ended the season with six assists, eight big chances created, and 1.7 key passes per game – highest in the Las Palmas squad. Apart from that, he is also capable of beating defenders with ease while carrying the ball into the final third before playing defence-splitting through ball. The kid resembles Messi-esque maturity on the ball, which can only be a sign of good things to come.

There are little doubts over Pedri’s creativity, but what makes him an even more exciting prospect is his bolstering stamina. Regardless of whichever zone he takes up, he is more than ready to close down the opposition and will go as high as the goalkeeper if necessary. He is also more than prepared to track the player who dispossesses him – something that happens often (14 times per game), given his creative prowess.

Speaking of midfielders who love to press, fan-favourite Riqui Puig is more than competent to take up this task. He finally received his breakthrough last season, courtesy of Quique Setién, who used him as in a free role against Atlético de Madrid, and then Real Valladolid.

Since the first time Puig caught the attention of the fans and the media, he has been applauded for his ability to progress the ball through pressure zones, and over long distances. Last season, for example, he carried the ball for a total of 386 yards per 90, and 173.3 yards per 90 towards the opponent’s goal. These stats, while from a smaller sample, are on par, or better when compared to midfielders well known for this characteristic – Paul Pogba (299; 156), Mateo Kovačić (426; 214), and Luka Modrić (353; 159).

The best thing about Puig’s style, though, is how efficiently he reads the game despite not enjoying a lot of time in the ‘big leagues’. Before controlling any pass, the 21-year-old scans the pitch as thoroughly as he can while moving into an unmarked zone. After receiving the ball, Puig moves the ball through the press or pass to an unconstrained teammate.

Body orientation and distance to support the teammate as factors determining the quality of the first touch. Perception and dynamics to continue the play with high efficiency. ?⚽️

Ronald Koeman will have to shed his rigidity now that he is no longer coaching a side that plays football once in six months. As coach of a team as big as ours, he has a responsibility to cater to, including taking care of new signings, while pandering to the best needs of the club on the pitch, which may not come if he chooses to deploy a 4–2–3–1.