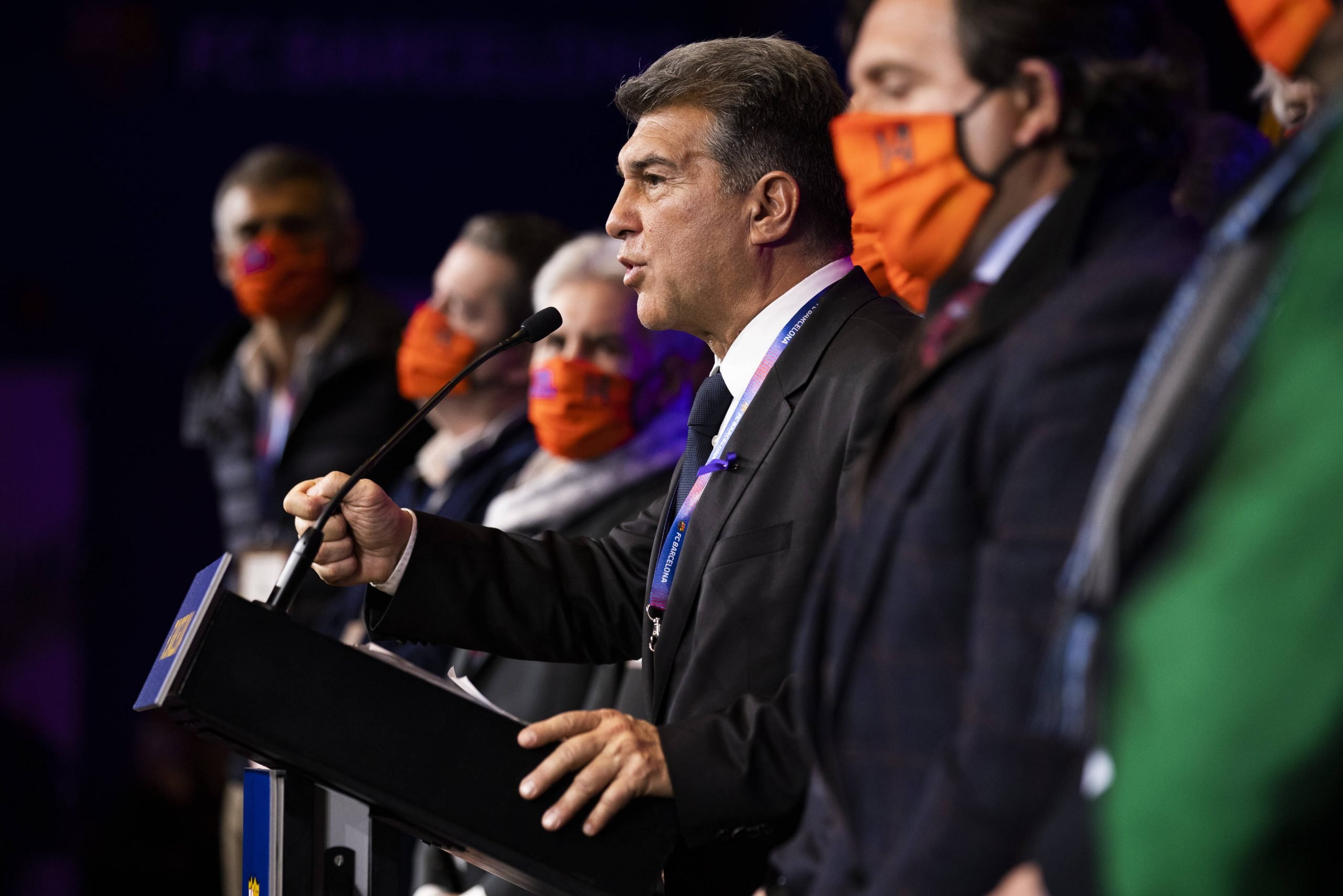 When the race for the presidency of the United States of America was a source of hot debate earlier in 2020, the New York times referred to Joe Biden as a “lurker”. Michelle Cottle wrote that one should never get in the way of an opponent digging his own grave. The lead-up to Joan Laporta winning the Barcelona presidential elections can be considered astonishingly similar in this regard.

The roots of political campaigns seldom change, be it leading a country or running a football club. To win, a candidate must know when to stay silent, when to object, what to promise, what to say and most importantly, what not to say. Appropriately navigating around all of these nuts and bolts is what constitutes the fundamentals of a successful campaign.

Such has been the case for Joan Laporta, who has run the cleverest campaign on his way to the president’s box of Football Club Barcelona. Bearing a remarkable resemblance to a stealthy predator, Laporta was patient and efficient in lethal measure. He chose his moments just right to get the better of his fellow candidates, playing to all his strengths to win over the socis and their votes.

When Laporta announced his candidacy for the upcoming elections in November, it came as a surprise to no one. Up until then, however, there was only one name on everyone’s lips — Victor Font. With his ‘Si Al Futur’ campaign, Font seemed like the ideal president to free the club from its shackles of mismanagement, financial crises as well as failures on and off the football pitch.

But as the race for club presidency unfolded, Laporta came from behind and navigated through the crests and troughs to slowly get the better of his contemporary. It was almost as if he willingly gave him a head start.

And Toni Freixa? In all honesty, he never stood a chance. After barely crossing the threshold of 2,278 signatures for his candidacy to be valid, he was always just the third party making up the numbers. His sympathies towards Josep Maria Bartomeu and Sandro Rosell were going to be major strikes against his name. Considering the downward trajectory the club has followed the past few years, it wouldn’t take a genius to figure out Freixa is the most unsuitable candidate by quite some distance.

Amid Friexa’s rigging of online polls using automated bots, Laporta and Font locked horns in a contest for the presidency. A task that would entail reversing the club’s biggest financial crisis in its 122-year-history, getting their greatest ever player to stay after a near-disastrous end to his time at Barcelona and restore the club’s name to glory after over half a decade of tarnation.

Seven years in the plotting, Victor Font had laid out a detailed project, seemingly covering every base from finances, to sporting project, to general management. He had even thought up a few great changes to make to enhance the efficacy of the club’s public ownership model.

Font believed starkly in returning La Masia to its pedestal of prime importance- The youth shaping the future. He advocated for a content-driven business model, an electronic voting system for future elections, and an advisory board of specialists to govern the club so that more members could be involved in the club’s decision-making process.

Then comes the headline of his project — bringing Xavi Hernandez back as manager of the club. The legendary Barcelona midfielder, returning to the dugout, this time as a coach. And back when Xavi just started out his managerial career with Qatari outfit Al-Sadd, he even backed Victor Font, saying that Font was “well prepared and a good candidate.”

Sounds ideal so far. But what went wrong? Amid all of Font’s preparedness, he did not account for possibly his biggest challenge — Joan Laporta. One cannot contest an election without expecting opposition. And when the opposition is as fierce and competent as Laporta, complications are more than obvious.

However, Laporta doesn’t fully come into the picture until much later. Font’s campaign began unravelling slowly but surely due to his own doing. All Laporta had to do was strike when the iron had been heated up for him.

First came his comments on current coach Ronald Koeman. Speaking of the Dutchman, Font said that if he were elected, Koeman would not continue as a coach regardless of his achievements. He faced a fair amount of backlash for these comments, which he later rescinded.

That was the first blemish. It is never a good sign in a campaign when you have to take your word back publicly. What followed was a seemingly flustered attempt to bring his perfect run so far back on track. A string of taunts aimed at Laporta, the over-insistence of Xavi’s involvement in the project, the agreement to postpone the elections and finally the debates drove the final nails into the coffin of what was a very potent campaign.

Font went on the offensive, so far as to say that Joan Laporta has no sporting project. He accused his campaign of being driven by nostalgia. Font stressed that we must look towards the future and the past only serves to teach from the mistakes it holds.

In fact, Font even tweeted his comments on Gerard Pique’s views about members voting for the future, reiterating that the past only serves to learn from mistakes. Pique, however, bluntly asked Font to remove the tweet, wanting nothing to do with the campaign. Font duly obliged, but in hindsight the tweet could be construed as a dig at both Bartomeu and perhaps Laporta.

Pique’s response was another tough pill to swallow. Then came the meeting to postpone the elections in January. At this point, Laporta had well and truly begun implementing his plans, and Font knew that he had stiff competition.

The pandemic has obviously created massive complications, and Font seemed eager to postpone the voting. While his reason that all socis cannot be guaranteed to vote was valid, it was clear that he also needed more time. Laporta had emerged as the favourite and an immediate vote would not have favoured Font. And despite initially pushing for having elections as early as possible, Font had found a way to stall, which once again did not go down well with the fans.

This was then followed by the eventual distancing of Jordi Cruyff and even Xavi himself from Font’s campaign. Jordi Cruyff even said that his father Johan would have himself voted for Laporta. The ultimate dagger that may have tilted the scales for good.

Amid all this chaos, Laporta carefully picked his battles and managed to overpower his opponent. Font has been very unfortunate in many ways, but his lack of experience in a political scenario like this has overshadowed his genuineness and ideologies.

There was already a lot going on for Joan Laporta as he entered the race for the presidency. After all, being at the helm of Barcelona during its most glorious spell in history has a fair amount of prestige to it. No matter the amount of time that passed, those times will always be looked upon with incredible fondness.

With the unfurling of his banner a mere 100 yards from the Santiago Bernabeu in Madrid, Laporta made his presence officially felt. “Looking forward to seeing you again”, read the massive banner sending a message to both Barcelona as well as Real Madrid fans.

The first power move of many that helped him leapfrog Victor Font. From competitor to overwhelming favourite, Laporta has provided the perfect example of an ideal campaign. He stayed quiet while Font was the architect of his downfall. But when the time came, he struck just the right chords.

The manner in which Laporta spoke throughout his running was noteworthy. He had the confidence and just the right amount of arrogance in his statements. Laporta knew full well that he is backed by his immensely successful past. His pre-existing relationship with the players, club legends, and superagents in world football were all great weapons to support his candidacy.

He chose to retaliate against Font in very carefully selected moments. He chose to respond to Font’s comments about Koeman separately. He never addressed them directly, but he said he would honour Koeman’s contract and commitment to the club, which was the best answer. That provided the first distinction between the candidates.

During the presidential debates though, is when Laporta took the strongest stance.

Laporta to Font during the first debate

Laporta reproached Font’s approach to the elections, which seemed to fully hinge on Xavi’s approval and arrival. He then pointed out that Font spent the final months of the campaign just rectifying the mistakes he made.

He was also quick to point out that when he was in charge of the club, eternal rivals Real Madrid did not win a single Champions League title. And in addition, he did not understate his influence among the players.

“One thing is clear: Messi wants to stay and we must make him stay. It is clear that if any of my rivals wins, it will be very difficult for him to stay. He knows me, and that I do what I say. What he wants is someone who appreciates him and he knows I work like this.”

Laporta in the final presidential debate

He was also subtle but assertive in his comments about future signings for the club. Laporta said that he is in close contact with many superagents and that with him, Barcelona are capable of attracting any of the biggest superstars in the world.

Every time he spoke, it was as if he knew he had the votes in the bag. A sense of assurance always surrounds him. Even before it was official, he inspired confidence and trust. And somehow, it always felt like there was no better person to convince Lionel Messi to stay at Barcelona. Even though the Argentine’s departure seemed and perhaps still is set in stone. But with Laporta, there is optimism, even though it may be blind.

Laporta has played all his pieces to perfection, drawing out errors and capitalizing on them, much like Barcelona used to do to their adversaries when he was formerly in charge from 2003-2011. He capped off the final debate by saying:

“I showed up because I love Barça. We have to return joy to the Catalans. I know how to do it. Being President was an honour, and being President again will be the biggest challenge of my life.”

Times have drastically changed since then, however. He is now at the helm of a very different club than the one he left behind a decade ago. He has a whole host of challenges to overcome, with severely limited resources to do so. But again, when he took over back in March of 2003, the club were on the brink of relegation after years of mismanagement by Joan Gaspart.

A situation similar in many ways to the one Barcelona are in right now. A fresh-faced Joan Laporta, with the endorsement of Johan Cruyff back then, took charge with over 52% of the votes. The rest is history.