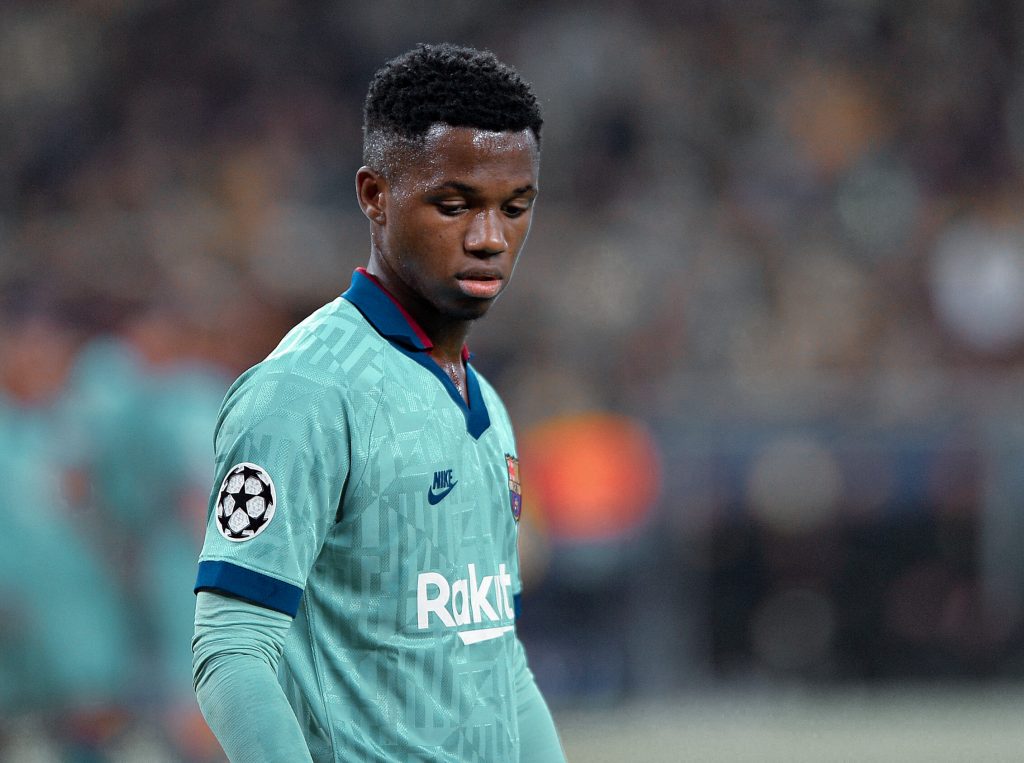 Ansu Fati has risen through the ranks at FC Barcelona at an incredible rate, but is he ready to start in the all-important Champions League?

Anssumane Fati is a young prodigy. The sky is the limit for this 17-year-old. Despite it being only his first season in the first team, Barcelona’s Ansu already has six goals and one assist to his name. He has scored crucial match-winning goals and is brimming with confidence. He even scored the match winner in the Champions League group stage match against Inter Milan at San Siro. But the question remains: should manager Quique Setién pick Ansu as one of the starters in the crucial fixtures in the knockout stage?

Playing in the Champions League is very different from playing in La Liga. Unlike the league, it is a knockout tournament, and even the smallest of slip ups prove costly. Not just that, the Champions League contains the very best sides in all of Europe. It is one thing to score goals in the league and another to score in a fixture against sides like Bayern Munich or Napoli. With the remaining stages shortened to just one match, Quique Setién needs to be careful about his team selection.

Ansu Fati has shown on more than one occasion that he is no stranger to playing under pressure. Fati has been one of the only good performers in the team. He has stunned everyone who watches him play. He is even preferred over many of the more experienced players in the team. What he offers to the squad is just the thing the team has been missing for the last few years.

He gives Setién the choice of playing a proper winger in the team. The team has struggled to break down defenses through the middle and Setien has had to use the fullbacks to compensate for the lack of a true winger. With Ousmane Dembélé out until the final rounds, Ansu is the only natural winger in the squad.

Quique Setién has been experimenting with the team sheets in recent games. He has tried an unorthodox 3–5–2, a 4–3–1–2, a 4–4–2, a 4–3–3 and even a 4–2–2–2. But in most of the formations, he has chosen to play centrally with the full-backs providing support on the wings. It would be difficult to incorporate a winger in such formations. Yet without Ansu Fati, there is a real lack of pacey players who can take on defenders, especially while playing the 4–3–3.

A major problem of playing centrally is that the team seems worn out in the later stages of games. The substitution of Riqui Puig renders the midfield stagnant. Even after using various different formations, the team tends to lose its tempo as the game progresses. With Lionel Messi being the only creative player on the pitch, the team feels sluggish when he doesn’t perform. Yet Ansu offers that spark in attack that the team needs. He might be young and inexperienced, but he offers dynamism to the team.

In a 1–2 win over Inter Milan at the Giuseppe Meazza, Ansu Fati became the youngest goalscorer in the UEFA Champions League history with his winner at the age of 17 years and 40 days | Photo by Isabella Bonotto / AFP via Getty Images

All of these factors suggest that Ansu is ready to start games. But in recent fixtures, Setién’s tactics have been working in the first half. The win against Villareal brought the best out of the squad and reminded fans of the days of old. With teams in the Champions League playing much more open than majority of the teams in La Liga, Quique could use the availability of Ansu Fati on the bench as an advantage as well.

As the game wears on, Ansu could be brought in against a well worn opponent to re-inject youth and pace into the team. The five-substitutions rule could be used to the team’s advantage. With the return of Frenkie de Jong, the blaugranas will have a healthier mix of veterans and youngsters. By employing the 4–3–1–2 or 3–5–2 in the first half, Barça could play through the middle and utilise the first half form that fans have seen in the last few games. Bringing on Ansu in the second half would change the dynamics of the game. The older players will also receive the rest they need.

Instead of bringing on ageing players in the dying minutes of the game, a pair of fresh legs capable of running behind the ball will certainly make it harder for opponents to break through the team’s defense. But it is essential that the substitutions are made at the correct time. As seen against Atlético de Madrid, Setién cannot afford to keep Ansu off for a long time. He needs to be playing at least 30 – 35 minutes to make him effective.

Quique Setién needs to have a clear game plan when choosing the team. Ansu would prove useful when playing against a narrow playing team, but having a centralised attack could come in handy against wider teams. It is the team’s requirements that will decide whether he will start or not. Nevertheless, whenever he is introduced, Ansu Fati is undoubtedly going to be vital if the azulgranas want to mount a challenge in the Champions League.