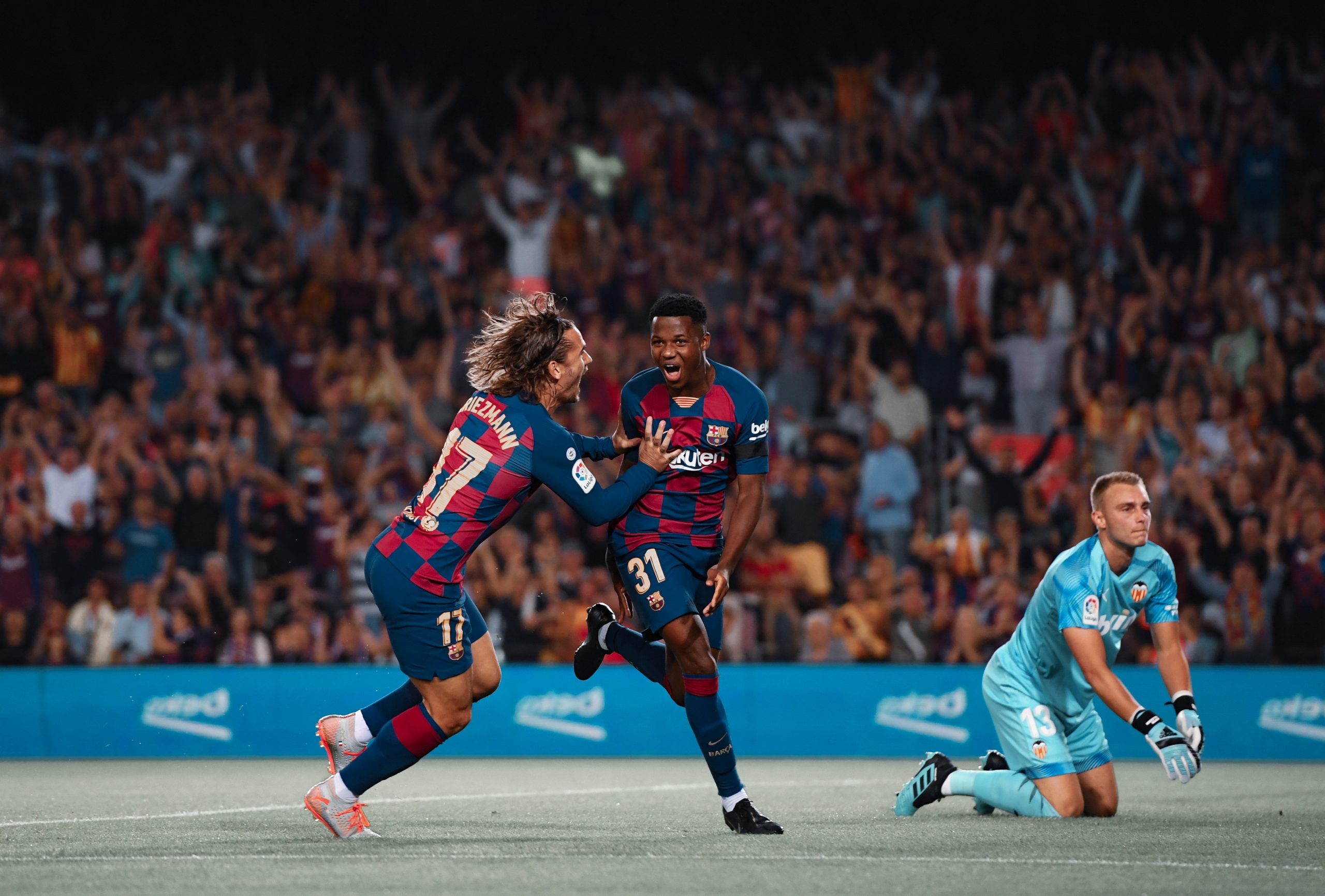 Lionel Messi wants to leave. The meetings between president Josep Maria Bartomeu and Messi’s agent and father Jorge Messi ended in a stalemate. The general impression is that Barcelona is doomed. Is this true? Or is it possible for Barça to survive the potential catastrophe that would be the departure of Messi? If yes, how?

Despite the twists and turns in a long saga, for many, it is evident that Lionel Messi’s departure from FC Barcelona is more a matter of ‘when’ than ‘if’. Messi did not turn up for the health check-up scheduled on Sunday or the first training session on Monday. Meanwhile, according to the latest reports, the new Barca manager Ronald Koeman is also preparing to move on from this precarious situation and is focussing on building a new squad. The guiding principle in this attempt at rebuilding should be what Barcelona’s legendary player and manager Johan Cruyff once said:

“Choose the best player for every position, and you will end up not with a strong 11,
but with 11 strong 1’s”

For example, look at the last season. As the season began, Barça had more than enough high-profile players in their attack: Lionel Messi, Luis Suárez, Antoine Griezmann and Ousmane Dembélé, as well as Philipe Coutinho, who left on loan to Bayern Munich. But whenever Messi had a subdued game, the whole team looked lost. And this was not the case with just one campaign.

This brings us to the main point here. A few star players cannot form a team. And if there is no team, you cannot play good football – forget about winning anything. Messi’s own career is a testament to that. He is a genius. Arguably the best football player the world has ever seen. But he cannot act alone. Look at the Argentinian national team and their – humble – achievements. Look at what Barcelona has done in the last five years. Both sides had big names apart from Messi. But both lacked one thing: a coherent, well-planned team.

Another important question that needs addressing is how Barcelona reincarnates itself post Messi or how they handle his departure. One thing that the club management, the squad as well as the fans, should remember is that there is no replacing Messi. Just as there is no replacing Andrés Iniesta, Xavi Hernández and so on. Legendary players are impossible to replace and any attempt in that direction usually does not end well.

Barça tried replacing Iniesta with Philippe Coutinho. They soon found out that Coutinho, while being a talented player on his own, was no Iniesta. The Brazilian took too much time on the ball, lacked movement off the ball and was too predictable in front of the goal.

Barcelona should have learned that they cannot look for like-for-like replacements to their legends, let alone with someone as unequalled as Lionel Messi. An improved collective is the way to go | Photo by Pau Barrena / AFP via Getty Images

It will be difficult for Barcelona to recover from the setbacks and the loss of confidence suffered in the last course, especially as some of the key players in the team, expected to steer the ship through the storm, will not be present anymore. So what needs to be done and how? A famous quote, attributed to Saint Francis of Assisi, goes “Start by doing what’s necessary; then do what’s possible; and suddenly you are doing the impossible”. Barça needs to start with the most urgent requirements, and slowly build up from there. They need to find the right players that will fit the system and strategies being devised by their new manager Ronald Koeman.

The manager, of course, has his task cut out before him. But so far, he has shown himself entirely capable. He made an attempt to explain his intentions to each of his players. He also spoke to the footballers that he found to be unfit for his plans. Some of them like Ivan Rakitić and Arturo Vidal are already on their way out, while more would follow soon. The manager is reported to have asked for reinforcements across the pitch and there have been plenty of names linked to Barça recently.

The best policy here, especially in light of the club’s economic situation, will be to rely on the famed La Masía academy. The academy forms the root of the club, and that is exactly where they need to go back to. There is a string of talented gems ready to take more responsibilities. They have to be promoted and allowed the time, patience and confidence to grow into their capabilities.

Many of the gaps in the squad, especially in the midfield and attacking positions can be filled by these youngsters. The few that are left will have to be dealt with by bringing in players from outside. Even in those cases, the club should look at younger talents than superstars, who would come with hefty price tags and even heftier wage bills.

Let’s begin at the back. There is no question that the backline needs reinforcements. On the right side, Sergi Roberto needs to return to his favoured position in the midfield, and there needs to be a new face to give Nélson Semedo proper competition. Sergiño Dest of Ajax Amsterdam has supposedly piqued the interest of the management and placing trust in the youngster does seem wise.

Similarly, at left-back, Jordi Alba is slowing down and there needs to be someone who can take up his mantle soon. Clearly, it doesn’t seem like Junior Firpo is up to the task. Manchester City’s Angeliño has been a target. He is coming off a good half a season at RB Leipzig and would definitely be a promising addition.

At the centre-back, with Samuel Umtiti touted to leave, Manchester City’s Eric García is also rumoured to be on the way to Catalonia. In fact, Angeliño and Eric García could both be brought in as part of a cash-plus-player swap for Messi. With Ronald Araújo being promoted from Barça B and Jean-Clair Todibo – despite an uncertain future – coming back from his loan, along with Gerard Piqué and Clément Lenglet, the backline will have enough youth and experience to walk into the next season.

In the middle of the park, there are going to be several departures. Arthur Melo and Ivan Rakitić have already been sold. Arturo Vidal and Rafinha Alcântara are supposed to follow suit soon. Though the new midfield is going to be built around Frenkie de Jong, Sergio Busquets is also going to have a pivotal role. Miralem Pjanić has already been acquired from Juventus. Young stars like Pedri, Mathieu Fernandes and Carles Aleñá are joining back from loan.

Add to this Sergi Roberto being handed a place in the midfield as well as the promotion of Barça B player Riqui Puig and perhaps Monchu and Álex Collado, and we find that the middle line is quite packed with both veterans and promising youngsters. There have been rumours that Koeman has asked for a box-to-box styled midfielder. Liverpool’s Georginio Wijnaldum has been linked with a move, considering his contract expires next year. For the same reason, he will be available for a cut-price deal. As long as the club doesn’t go overboard with his wages, this could be a smart move from a tactical viewpoint.

If Messi departs, Barcelona will have to bet on youth and their own gems | Photo by Alex Caparrós via Getty Images

Which brings us to the attackers. Lionel Messi is pushing for a departure from Barça. Luis Suárez has also been deemed surplus to requirements. That leaves Barcelona with Antoine Griezmann, Ousmane Dembélé, young sensation Ansu Fati, and the new recruit Francisco Trincão.

Koeman is reportedly redesigning the squad into a 4–2–3–1, with a lot of focus on attacking. The trio to be deployed in front of the two-man midfield in this formation could potentially be Griezman, flanked by any two of Dembélé, Ansu Fati and Trincão, or even Pedri. So who slots in as the number nine, in the absence of Luis Suárez?

Barça’s answer seems to be Inter Milan’s Lautaro Martínez. They already have an agreement with theplayer and, considering his potential, paying around €80 million does not appear too steep. An accord with Inter, though, still seems complicated. If Barcelona can sweeten the deal by sending Junior Firpo or Arturo Vidal to Inter Milan, all the better.

“We never started official talks with Barcelona over Lautaro Martínez. The day after his release clause expired, we considered him not for sale. It’s over”

To sum it up, even as they are reeling from a humiliating season and the possible departure of their best player ever, even without Lionel Messi Barça could still manage to step into the new season with a balanced squad and with the potential to become a force to reckon with in the not-too-long future. Meanwhile, only time will reveal what surprises the future has in store for Barcelona.