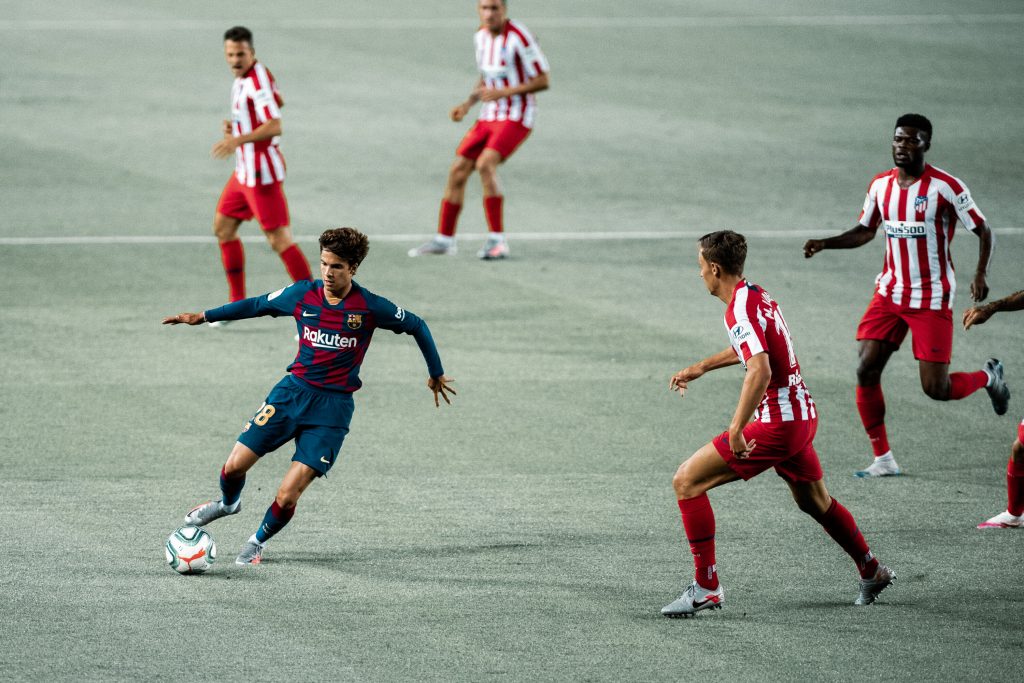 The mood around the Barça camp or in the minds of the culés is not bright. With everything going around the club, there seems to be only one silver lining to all that’s happening: Riqui Puig earning himself a starting spot in the XI with his impressive performances. Here’s how he did it and how he deserves it.

Barcelona are still unbeaten after the restart, but they have dropped six points with three frustrating draws. Apart from the win at Mallorca in the opening game, the other victories have not been satisfactory per Barça’s standards. In addition to the on-field miseries, there have been off-field ones as well. Arthur Melo announced his departure to Juventus at the end of the season, and Frenkie de Jong injured his calf muscle and got misdiagnosed.

With Arthur out of form and not in the right mind to play, and Frenkie out with injury, the Barça midfield looked pale. Arturo Vidal seemed like he has run out of gas, playing every other game. The midfield lacked creativity or mobility of any kind, which in turn prompted Lionel Messi to drop deep and create. The only problem was there was no capable finisher or runner upfront with both Luis Suárez and Antoine Griezmann out of form. Enter Riqui Puig.

The cameo versus Athletic Club

Quique Setién started last week’s game against Athletic Club de Bilbao with a midfield of Arthur Melo, Sergio Busquets and Arturo Vidal, with the so-called MSG – Messi, Suárez and Griezmann – upfront. Athletic, though, closed down the centre and choked the Barça attack. The blaugranas were static, and the game seemed to go towards yet another frustrating draw. But the home team subbed Riqui Puig in for Arthur a few minutes after half-time, and the prospect of getting the three points increased considerably.

Riqui came on, slotted right into the game and showed his class. He took on players, got in between the lines and drove forward. The Spaniard showed his desire to have an impact on the game by throwing himself to press and tackle every time Barça lost the ball. The midfield got newfound energy and increased fluidity for the rest of the game. Coach Quique Setién was on point with all his subs in this game, and all had an impact once coming on. The strong performance from Riqui, however, put him in the spotlight, and in contention for the starting spot in the following match.

First league start of the season against Celta

Away against Celta de Vigo, Quique Setién started the three substitutes of the previous game, impressed by the contributing cameos of Iván Rakitić, Ansu Fati and Riqui Puig himself. Riqui got his first start of the season in the league, and he was keen on retaining the spot. The 20-year-old was once again majestic in the midfield. He took upon responsibilities, was brave and always interested in cutting open the spaces.

Riqui’s contributions did not stop just with the attacking phase as he tracked back meticulously whenever the team lost the ball high up the pitch. Many fans questioned his physique when it comes to defending, but his small stature allows him to press better, and the low centre of gravity helps in retrieving the ball. Puig got subbed out in the 86th minute, with yet another excellent game under his belt.

The preface to the encounter against Atlético de Madrid was alarming for Quique Setién. There were audacious reports that his job was on the line for the game, and he was under intense scrutiny. He had two choices: to choose the most deserving eleven to play his way, or choose the heavyweights and change his methods to adapt. The Cantabrian picked a mixture of the two, but gave Riqui Puig the start in a crucial title-deciding clash. The trust was in place.

Riqui did not disappoint the faith the manager had in him and continued with his brilliant display. Messi did not take the creativity upon himself and trusted the young midfielder to more than make up for the lack of it. Both little geniuses combined brilliantly, a few times, understanding each other’s runs and movements. The ability to play in tight spaces taught in La Masía was showing.

Once again, Riqui dominated the midfield and was arguably the most productive of the four midfielders Setién chose. While the previous matches were against considerably lower-tier opposition, this time he went head to head against some of the best. He was unfazed by the physical presence of Thomas Partey or the talented Saúl Ñíguez. Puig drew fouls, broke lines continuously, and was a menace to the Atleti defence.

Riqui Puig impressed in all three games, with each performance better than the other making a strong case for the starting spot | Stats from Sofascore

So, what does Riqui Puig brings that the current first teamers don’t have or have less?

What does Puig do differently?

The current crop of the Catalan midfield consists of many box-to-box players and a few who can carry the ball up the field. Arturo Vidal and Iván Rakitić are the usual midfielders who do not have high penetrative passing, but they arrive at both penalty areas and cover spaces efficiently. Both Frenkie de Jong and Arthur Melo like to get the ball from deep and progress the play. They are comfortable on the ball and are press resistant. Riqui ticks most of these boxes, in addition to adding a layer of creativity.

Unlike most midfielders at Barça, Riqui often stays on his toes, ready to jump into action. He looks up the field on receiving the ball, scans his surrounding and plays the pass. Always looking to break the lines, he attempts the most improbable passes and executes those to perfection. The way he opens up his body towards the wings but swiftly passes the ball to the interior looks much similar to Sergio Busquets.

“He was extraordinarily good. He understood what we asked of him and Barça and the fans can be satisfied, they have a great player. He showed great desire and was at a great level. He has quality”

Having gone through the ranks of the La Masía, the 20-year-old knows and executes the positional play principles to perfection. He often places himself between the lines by feinting runs and while receiving the ball, often aligns his body to turn and move towards the goal. Yet another facet of his impressive set of skills is his ability to accelerate. Much similar to Messi, Puig uses his low centre of gravity to his advantage. His sudden bursts help him while taking on defenders or drawing fouls in dangerous areas.

Being young and from the B team, the desire to impress and give his 100 per cent never fades. He never shows complacency or drops the level of his performance.

Barça may not be in the appropriate position they wanted to be. A lot of things going around the club are unpleasant, and fans are far from pleased by a lot of choices. The decision to sell Arthur has brought so much criticism from everyone around the globe.

But one glimmer of hope during these testing times is the arrival of Riqui Puig to the first team. Not only has he impressed, but he has also created a strong case for himself to be a regular starter. It is safe to say that Riqui Puig has earned his starting spot now.

Sometimes, things have to fall apart to make way for better things.

• Late substitutions: Is Quique Setién crumbling under the pressure?