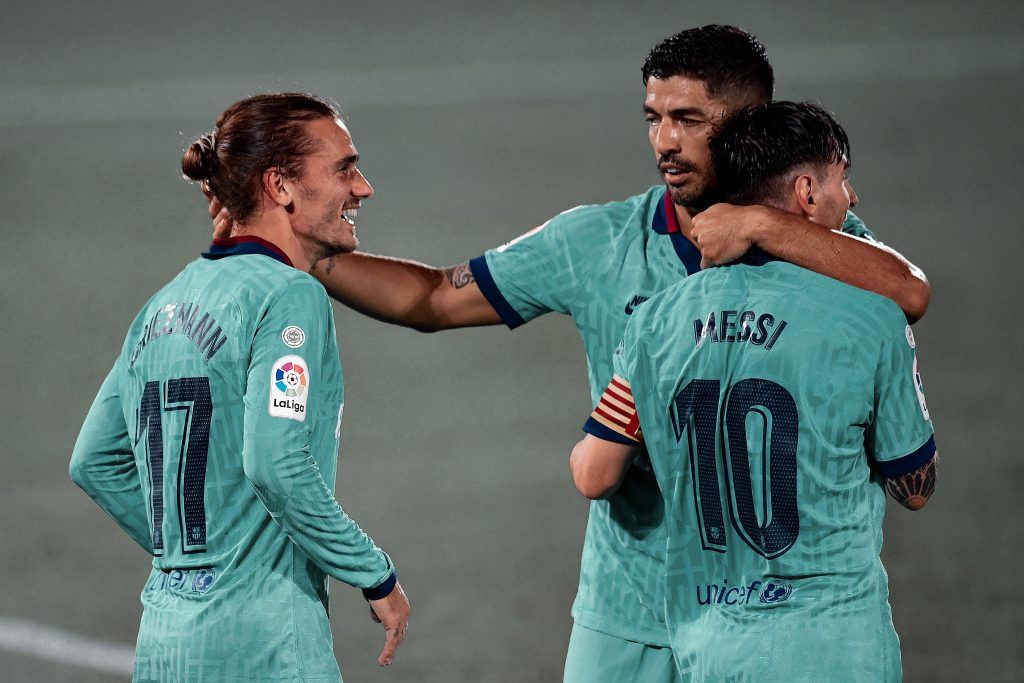 Since the departure of Neymar to PSG, Barcelona have struggled to find a potent front three. Antoine Griezmann, the latest player brought in to fill that void, has had a largely uninspiring season for his standards, struggling to fit in with Lionel Messi and Luis Suárez. However, after witnessing a masterclass by the MSG against Villareal, has a sustained solution finally been found by Quique Setién?

Lionel Messi, Luis Suárez, Antoine Griezmann. Three names in the world of football that strike terror in the minds of any opposition. Three players who are certainly in the top five in the world on their day. A combination that on paper should be able to cruise past any defence in the world, even on their worst days. Nevertheless, estimating the potency of attacking combinations in football is not as easy as arithmetic addition.

Messi and Suárez are no strangers to being in goalscoring trios. The dreaded MSN spearhead, completed by Neymar Júnior, was arguably the most dangerous trio that football has ever seen. They averaged a goal every 45 minutes, with as many as 270 goals scored between them. But, after Neymar decided to go out in search of fresh pasture in Paris, Leo and Suárez took on the burden of compensating the loss of what was one of football’s brightest talents.

While they have done their job considerably well, no other player has been able to cement his spot alongside them. The club spent heavily on Philippe Coutinho, Ousmane Dembélé and Malcom, just to name a few. None reaped the desired rewards. The next card played was that of Antoine Griezmann, who was the trump player for Diego Simeone’s Atlético de Madrid.

The birth of the MSG

On the 12th of July 2019, Barcelona announced the signing of Antoine Griezmann. The transfer received a mixed response across the globe. While some felt that it was exactly the name required to finally compensate for the departure of Neymar, others thought it was yet another futile effort by the board.

The new trio soon came to be hyped as the MSG. At the time of his arrival, Griezmann had over 130 goals for Atlético de Madrid and 185 career club goals. Whilst he was never a true winger, the obvious position for him on the field seemed to be the left wing. The question always remained the same: would he be able to adapt to a new role in the Barcelona system?

Both Ernesto Valverde and Quique Setién struggled to accommodate the three of them together on the pitch. Luis Suárez has earned the starting role as the centre-forward over the years. Lionel Messi, despite starting on the right wing, drifts centrally to the hole left behind the number 9. In Barcelona’s traditional 4–3–3 system, the only vacancy for Antoine Griezmann was that on the left wing.

The Frenchman, however, preferentially operates as a secondary striker, just behind a primary striker. At Atleti, that reference was Diego Costa, and in the French national team, it was Olivier Giroud. But at Barça, that role behind Suárez was taken up by Messi, around whom the whole team revolves.

Naturally, Griezmann was like a fish out of water. He still produced moments of brilliance, but his overall play was quite haphazard. Defensively he worked as hard as ever, but he hardly ever posed an attacking threat from the wing. Injuries played a key role in halting the development of any type of harmony In the trio. Messi found himself out for a month in August. In January, Suárez underwent a knee surgery that saw him out for six months.

During this period, Griezmann was deployed in a plethora of roles. He was played on either wing, even given chances as the main centre-forward. But none of these brought out the best in him. Statistically, he may have equalled Neymar’s debut season, but the play always looked disjointed and out of place.

The game against Atlético de Madrid last Tuesday saw Quique Setién experiment a 4–4–2 with a diamond midfield. Riqui Puig occupied the apex of the diamond, directly behind Messi and Suárez. Performance-wise, the team delivered well. Full-backs Jordi Alba and Nélson Semedo pushed higher than usual. Interiors Arturo Vidal and Iván Rakitić covered up the duties of winning the ball back. Sergio Busquets had to stay deeper to cover for the advanced full-backs. Meanwhile, Griezmann was kept on the bench till the 90th minute against his former club, something he was understandably not happy with.

“The MSG linked up extraordinarily well and we endangered their centre-backs and their holding midfielders. We were able to make progress on the wings when attracting people inside. It was what we were looking for, endanger them in central areas and have presence and threat”

Quique Setién
on the performance against Villarreal

Inspired by the performance against los rojiblancos, Setién opted for the same formation against Villareal at La Cerámica on Sunday. In what turned out be an ingenious tweak, Messi started at the apex of the diamond this time. Griezmann and Suárez played directly ahead of him as the two main strikers.

Luis Suárez playing at the tip makes him the primary threat to opposition defences. Additionally, it places Antoine Griezmann in a much more familiar position in what can be called a half-secondary striker position. While Messi started directly behind the two, he continuously switched positions with Griezmann. That ensured that all three players got equal chances in front of goal. Griezmann’s high work rate ensured that the ball was won back far more in the rival’s box, giving the team more control.

While the system seems centrally overloaded, the highly advanced full-backs provided some much-required width. Left midfielder Sergi Roberto played a crucial role in providing fluidity to the left wing. At the same time, he carried out defensive duties with Arturo Vidal.

The azulgranas created chance after chance against the Yellow Submarine. For the first time, the MSG upfront combined to produce absolute fireworks. The lighting quick passing sequences were heavenly, and the level of understanding they showed was commendable. At any point there were two predators ready in the Villareal box, waiting for an opportunity to pounce on.

The race for the league title may be over, but the team still fights on other fronts. Seeing the front three combine so exquisitely is a dream come true for the Barça faithful. If Quique Setién manages to bring symphony into the game of these three superstars, it would be a massive boost to the race in the Champions League. With four La Liga games yet to go, there is sufficient time for them to find that symphony. After all, as they say: better late than never!