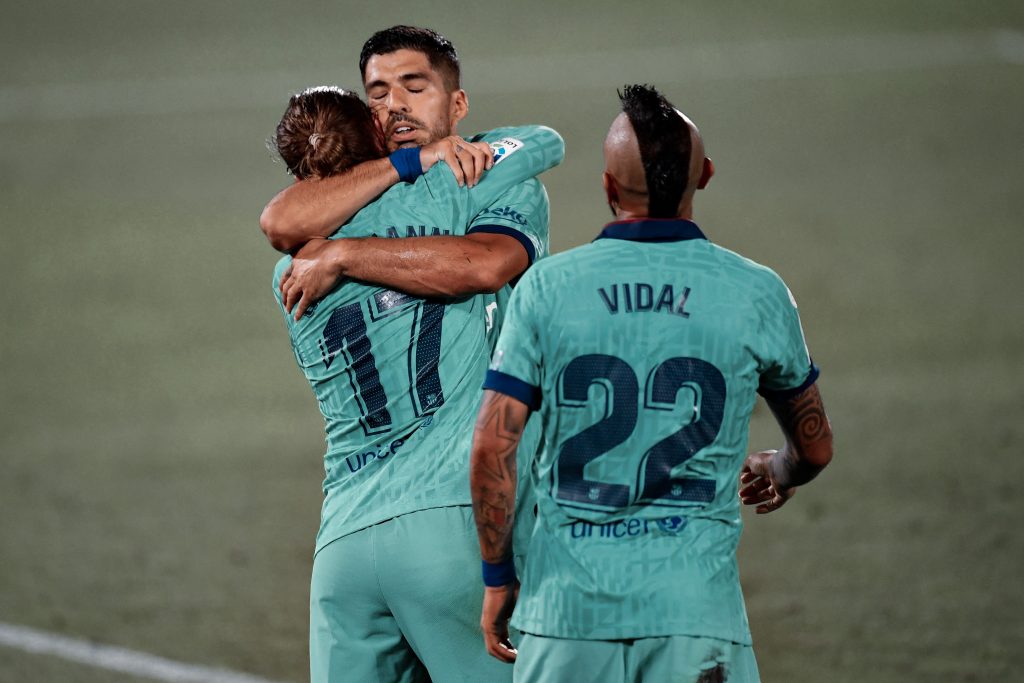 It was a much needed victory for Barça away at the Estadio de la Cerámica, and it came with some superb goals. Let’s go deeper into the brilliant attacking play from Barcelona that led to these goals against Villarreal, and the one defensive lapse as well.

Two consecutive draws, against Celta de Vigo and Atlético de Madrid, forced Barça to get a win in case they wanted to, at least, recover some confidence and positive sensations again. Even so, the 1–4 victory against Villarreal was far from expected, involving four brilliant goals from Barcelona and a complete dominance from start to finish. Let’s break down such goals scored, and the one conceded, from Quique Setién’s Barcelona against Javier Calleja’s Villarreal.

Barça were on the attack right from the start of this match, and that ambition payed off with an early goal. It came in just the third minute, as the blaugranas went down the left flank.

Sergi Roberto was the instigator of the attack, which began with him dropping deep and to the left to receive the ball from Clément Lenglet. The midfielder then played the ball ahead to Luis Suárez, who had checked in in front of his marker. Roberto, recognising the space for a return pass, burst into the space ahead of him after playing the ball.

Suárez easily played the ball into the path of the surging Sergi Roberto, creating a good attacking situation for the Catalans. There was now just four defenders between Sergi and the goal, and he had three teammates to pass to, so he just had to make the right decision.

The Villarreal right-back, Mario Gaspas, eventually stepped to close down Sergi Roberto, which left Jordi Alba as the free man wide to the left. Roberto picked him out, and Alba was then in a very dangerous position with options for a cross or cutback.

As Alba approached the ball, Antoine Griezmann began to make a hard run behind Villarreal’s young centre-back, Pau Torres. Alba spotted this run, and played a low, hard ball across the six yard box where the Frenchman was arriving.

Unfortunately for Griezmann, the ball was actually tapped in for an own goal by Pau Torres. While it wasn’t scored by a Barcelona player, the first of the goals in the Villarreal net set the tone for their attacking play that would follow throughout the rest of the match.

It was also a very nice move to create the goal by Barça, with twelve straight completed passes leading up to Jordi Alba’s cross. While the left-back won’t get an official assist, he deserves a lot of credit for this goal, as do Sergi Roberto and Griezmann.

While it was a comfortable win in the end for Barça, they did give up a 0–1 lead for the third straight match. Similar to the goals Barcelona conceded against Atlético de Madrid, this one came from a direct passing move where Villarreal went from box to box.

Villarreal first won the ball just outside their own penalty area, and they were quick to counter. This counter was initiated as the ball was played out wide to Samuel Chukwueze. The Nigerian winger received the ball, and looked up to spot the run of Paco Alcácer in behind Barça’s defence.

With Alba and Semedo high up the pitch from the attack, the two centre-backs were the only players left deep. Alcácer, the former Barcelona man, saw the huge gap between the center backs and exploited it with a brilliant run. The ball arrived well from Chukwueze, and Villarreal had made their way into Barça’s penalty area.

Gerard Piqué did well to recover and catch up to Paco Alcácer, but arriving into the box for Villarreal was also Santi Cazorla. The experienced midfielder was spotted, and the ball was played across the box to him. This left Cazorla in a solid position to score, but his low, driven shot was saved by Marc-André ter Stegen.

However, the rebound of this shot fell kindly to the feet of Villarreal striker, Gerard Moreno. The Spaniard made no mistake and put the ball in for his sixteenth La Liga goal of the season.

Villarreal had their equaliser, and there were more worrying signs for Barcelona’s defense. There were just four completed passes by Villarreal between them winning the ball outside their own penalty area and Cazorla’s shot. Direct passing and pace up front had once again been Barça’s downfall. It seemed like this match had the chance to be more points dropped, but the azulgranas responded well.

It took just about six minutes for Barça to retake the lead. For this goal, it was their turn to go from box to box and score.

The possession began with a Villarreal attempted through ball running all the way back to Marc-André ter Stegen. The German got to the ball just outside his box, and cleared the ball up the pitch.

While his aerial ability might not be his strong suit, Lionel Messi did very well to go up and win the ball out of the air with a defender on his back. The Argentine was able to chest the ball down, and then flicked it past another defender, leaving him on the ground.

Now faced towards goal, and with room to run into, Messi was ready to work some more magic. As he drove forward with the ball and weaved through Villarreal defenders, Leo eventually drew the right-back to step to him. This left Luis Suárez, who had drifted wide to the left wing, open just outside the box.

Spotting his partner in crime, Messi played the ball just ahead of Suárez. This set up El Pistolero perfectly for a first time shot with his right foot.

It was a vintage Suárez finish, as the Uruguayan curled his shot with superb technique in at the far post. Villarreal goalkeeper, Sergio Asenjo, could do nothing but watch as the ball glided into the net.

While Ter Stegen’s ball that started this move was far from his best pass, he does get credit for the secondary assist. That was one of just two completed passes in the build-up to this goal, as the individual brilliance of Lionel Messi took centre stage. It was a brilliant assist and a brilliant finish, giving Barça the momentum back.

Unlike in the previous two matches, this time Barcelona would not give up their lead a second time. Instead, that lead was doubled in the forty-fifth minute, further increasing the side’s confidence heading into the dressing room.

After Sergio Busquets won the ball for Barça on the right side of the pitch, there was a one-two played between Luis Suárez and Nélson Semedo. The Uruguayan played the ball across the pitch to Antoine Griezmann, which is where the danger began.

Griezmann layed the ball for Lionel Messi, who was arriving from deep, which created a three versus three situation. As Messi drove into the penalty area, all three Villarreal defenders closed in on him. Recognising this and seeing the space open up, Griezmann made a run to the inside of the Argentine.

After entering the box, Messi appeared to wind up for a shot or pass to his left for Jordi Alba. Instead, he produced another bit of brilliance, rolling the ball behind him into the path of Griezmann’s run.

Griezmann arrived to the ball just outside the area, and produced a finish that exceeded the excellence of the assist. With his left boot, the Frenchman lifted the ball up and over Sergio Asenjo to the far post. Once again, the keeper could do nothing but admire the effort.

The finish was undeniably reminiscent of Lionel Messi’s brilliant goal against Real Betis from a similar position. That goal should certainly provide Griezmann with more confidence going forward, as it was his first since Febuary. Encouraging signs were also displayed by this goal through the combination between Messi and Griezmann, who finally appeared to have that connection.

To wrap up an overall great performance, substitute Ansu Fati got back on the scoresheet with his eighty-sixth minute goal. The goal was a true testament to the intelligence and quality that Fati possesses, even at his young age.

After circulating the ball from side to side for a bit, the ball was played out to Jordi Alba. As the ball was travelling towards the left-back, Ansu Fati began to check in towards him, seemingly looking for a pass to his feet. This caused the defender marking Ansu to close him down tightly.

Nonetheless, when Jordi Alba received the ball and picked his head up, Fati turned and ran in behind the Villarreal defence. With a change of direction, the 17-year-old had lost his marker. Alba did very well to anticipate this movement, and played the ball over the top of the defence.

This put Fati in a one-on-one situation on the left with centre-back, Raúl Albiol. With Fati having the clear advantage in terms of pace, Albiol continued to drop off and give him space in fear of getting beat. But this allowed Ansu to make his way easily into the penalty area, where he had space to get a shot away.

Ansu Fati opened up on his right foot and took his shot low. It seemed to take a slight deflection, and Sergio Asenjo was completely wrong-footed and unable to react as the ball traveled in at the near post.

While the main contributors to this goal were certainly Ansu Fati and Jordi Alba, all of Barcelona’s outfield players touched the ball in the build-up. This seems to be a positive sign, as Barça were doing well to possess the ball and kill the game, while also keeping watch for an opening to attack.

While the scorelines and goals from the previous two matches seemed to have more negatives than positives, that was definitely not the case in the Barcelona win at Villarreal. Barça’s attack was firing on all cylinders, and the Messi–Suárez–Griezmann connection seemed the strongest it has been so far. Hopefully, this performance was just the beginning for the front three, and they can continue to build on it.

Out of the non-attackers in this match, major props have to go to Sergi Roberto and Jordi Alba. Roberto’s ball-carrying ability was well on display in this match, and created the first goal. It was Alba’s cross that led to the own goal for that opener, and he later picked up a very nice assist to Fati. It’s always important to have dynamic runs and passes coming from outside of the front three, and these two provided that.

Ultimately, this match seemed to get Barça back to their happiest state. Griezmann finally had reason to celebrate, and Quique Setién was back to looking enthusiastic on the bench. Even if the title is out of the picture, these are types of performances that have to continue to develop the squad into the best side possible.