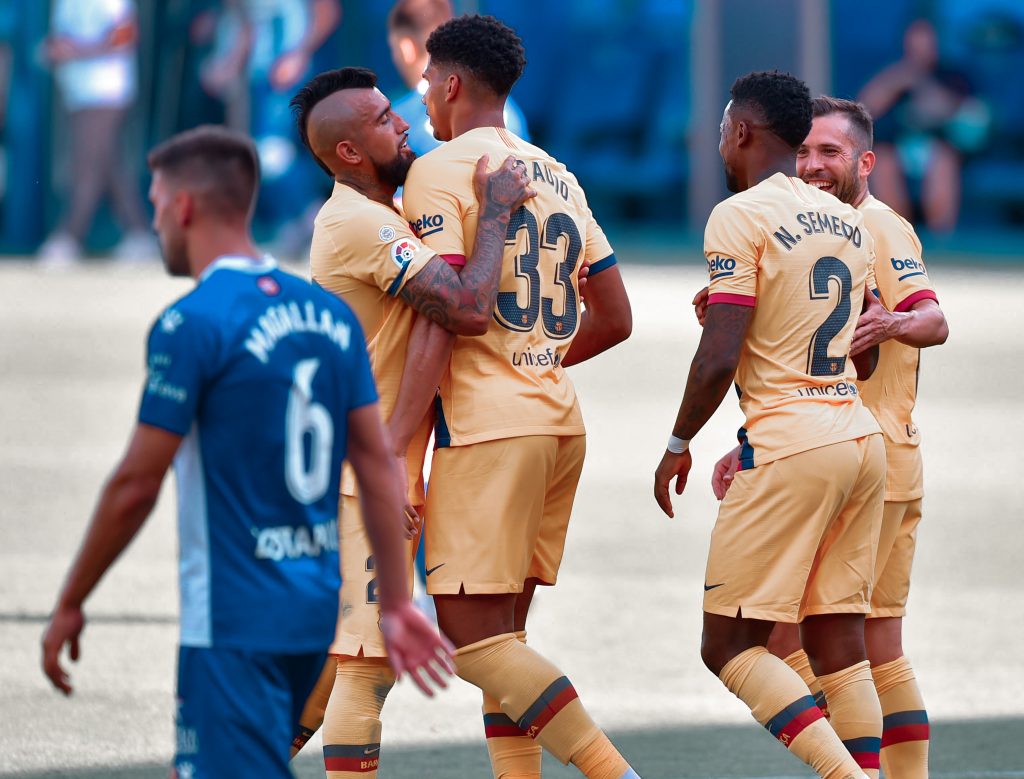 As Barcelona routed Deportivo Alavés for five goals at the Mendizorroza stadium, let’s take a look at how these goals were created and executed in what was a face lifter for the blaugranas.

After the midweek debacle against Osasuna that spelled the end to their hopes of retaining the La Liga title, FC Barcelona needed a game like the one they had against Deportivo Alavés before they shifted their focus towards the much coveted European Champions League. While the game was quite meaningless for all practical purposes, a step in the right direction was important for this Barça side. As they approached the game, though, things were not looking good, as their matchday squad had been cut down to 16, with only three outfield options available on the substitute’s bench.

However, the fears and anxieties seemed to have been shed right from the first whistle as the blaugranes started the match on the front foot and rattled the opposition’s post three times within the first fifteen minutes. In the end, it was a highly convincing 0–5 victory, so let’s look further into the goals to see what led to the win from Barcelona over Alavés.

The breakthrough finally came in the 23rd minute following an exquisite series of ball movement across the pitch. It began on the left side near the middle of the park, where Riqui Puig exchanged the ball back and forth with Jordi Alba. The latter then made a forward run and was beautifully found with a pin point ball by the former.

Bringing the ball down calmly, Alba squared it off to Luis Suárez, who appeared to have taken one step too many. However, he did well to recover quickly, protect the ball and evade the two defenders who were closing down on him before finding Arturo Vidal in the center. Finding space ahead of him, Vidal lined up a shot at the goal before taking note of Sergi Roberto’s run on the right. As Vidal laid the ball over to Roberto, the Alavés backline was already getting stretched. No less than seven Barca players were surrounding the Alavés goal.

“We had a bad experience in the last game, but today we were good and effective in front of the goal”

Roberto carried the ball into the box and found Lionel Messi on the edge of the box. Approaching the box from the right side, in what was reminiscent of his early years as a winger, Messi took two touches before finding Ansu Fati, who had quite cleverly evaded his marker and was making a run towards the penalty spot. Messi’s flicked cross fell neatly for Fati even as it took a deflection off the defender and the youngster calmly guided it inside the near post, with his first touch.

That was the seventh goal for the seventeen-year-old in his debut season for the first team. Whereas for Messi, that was a record 21st assist for the season.

Barcelona’s inability to capitalise on the lead and close out the game has been exposed several times this season. A single goal lead therefore was far from calming. This time, though, they refused to sit back after taking the lead. The constant search continued after the cooling break and immediately came to fruition.

The move that underlined Barça’s quick transitions last night began in the Catalans’ own half following an astute piece of pressing and intervention when Sergi Roberto and Arturo Vidal teamed up to recover the ball. Neatly recovered, the ball was handed to Messi near the halfway line, while Roberto anticipated Leo’s move and made an overlapping run on the right flank.

“We have taken a step forward in terms of commitment and our attitude. Today, we could see it. Like the coach said, we have to be more consistent throughout the 90 minutes”

Messi acknowledged this run and passed it to Roberto, who launched a beautiful diagonal ball towards the 18-yard box in search of Riqui Puig. Puig left his defender trailing in his sprint to reach the ball first. But that was only half the job done; he then deftly brought the ball down with a beautiful first touch and squared it off to Messi, who arrived inside the box just in time to connect with the pass.

Messi then took the ball and sent the keeper sprawling on the pitch, before scoring neatly with his left foot to double the team’s lead as well as increase his own at the top of the Pichichi table for the most number of goals in La Liga. The assist was appreciated by Messi, who went straight to the youngster to celebrate.

Barcelona now had two of its three starting forwards on the scoreboard. Needless to say, Luis Suárez was eager to get on it as well; especially after having had two great chances saved by the Alavés goal keeper Roberto. His wait did not last long as just before the half time, Messi picked the ball and approached the Alavés box.

He had three options in front of him: Ansu Fati on the left, Suárez in the middle and Arturo Vidal on the right. Each of them marked tightly. Messi himself was being tracked by a defender, whom he evaded with a typical drop of the shoulder and a pull back. This gave Jordi Alba enough time to cruise forward on the left flank unnoticed, behind the enemy lines.

Messi could not have asked for a better outlet as he launched his cross to Alba. Alba took it in his stride and squared it off his first touch to find Suárez in front of the keeper. The latter did not miss it this time as he headed the ball down past the keeper with full intent.

Barça manager Quique Setién was forced to make changes in the line-up early on in the second half as defender Clément Lenglet was injured. With no centre-backs left on the bench, Setién took a gamble by sending in Nélson Semedo. Semedo was to take up the right-back position from Sergi Roberto, who would move into the midfield and thereby free Arturo Vidal. Vidal was assigned by the coach to fall back as a makeshift defender.

This move made its effect felt immediately elsewhere, as Nélson Semedo pushed forward down the right flank in the 56th minute. Collecting the ball with ease, he passed it back to Sergi Roberto, who gave it to Messi in one touch. Messi controlled the ball, found Riqui Puig and continued his run inside the box.

“These players are the future of the club. They show quality and responsibility. One day, they will be great players”

With both Messi and Puig being tracked by defenders, Semedo found himself in some free space on the right side of the box. This was spotted quickly by Puig, who passed it on for Semedo. The latter then took a smart first touch before burying it in the goal. Another goal that underlined the craft and guile of young Riqui Puig, who, as the commentators duly noted, is all but kicking at the doors of the senior side now.

The game was all but over now. Even as Alavés were trying to pull a goal back, even as their coach was urging them to do exactly that, Barça were well and truly in control now. Circulating the ball around patiently, they were however looking to increase their tally. It was in the 74th minute that young defender Ronald Araújo came up to the half-line and passed the ball over to Sergi Roberto.

After exchanging a one-two pass with Frenkie de Jong, who came in to replace Sergio Busquets, Roberto took out two defenders by a perfect pass to Messi. Mesi passed it over to De Jong with a single touch, as he turned to face the Alavés box. Driving the ball forward, Frenkie found a neat lane to connect with yet another overlapping run from Jordi Alba.

And as is usual with Alba, he took it in his stride and sent a cross into the danger area, with a brilliant first touch once again. There were two targets in the line of Alba’s cross. Suárez stood first, but was tightly marked by a defender. Yet Luis was aware of his best pal waiting behind him. Therefore, without disturbing the cross he stepped ahead and dragged the defender with him, making a clear lane for the cross to find Messi. The cross did find Messi and he sent it straight to the bottom corner of the goal with that precious left foot of his: five-nil. Messi’s lead at the top of the Pichichi table was now four goals strong.

This was by no means a crunch fixture or a high-pressure game. And the performance in this one game is not going to do much to define a season that has been pretty frustrating for the culés. Nonetheless, the effect that it will have on the squad, as they prepare for the Champions League, is immense.

Had this been another struggling and stagnant performance, the team would have had to face Napoli with that result in the back of their heads. As meaningless as this game and its results were for the league, for Barça this will be a confidence booster that they badly needed. If nothing else, it will help them believe that they still have a chance of redeeming this season.