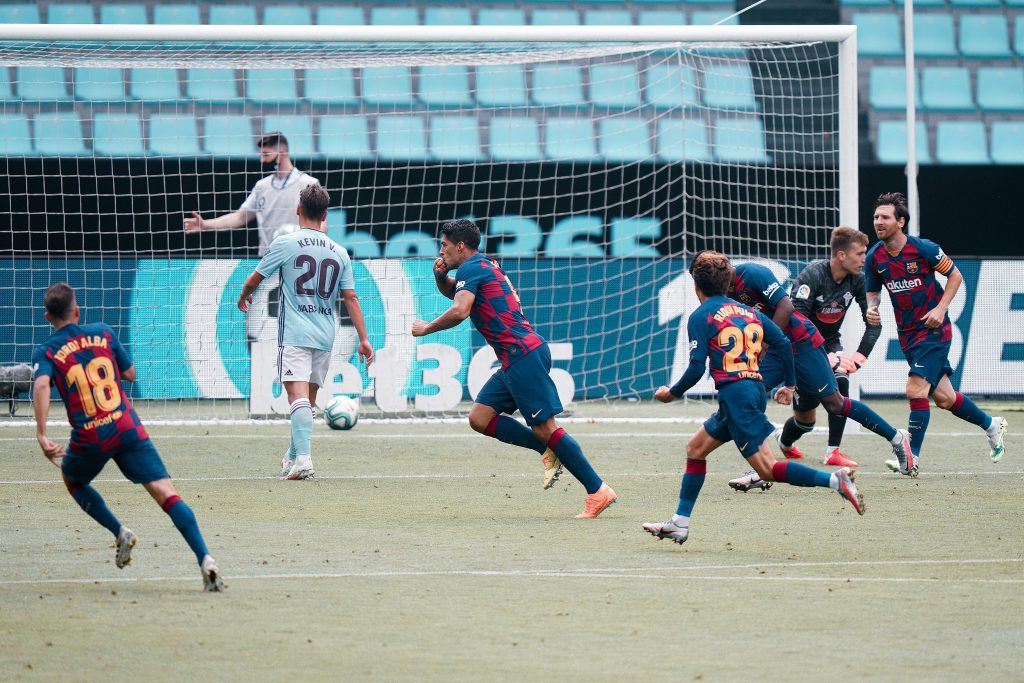 With four goals, the clash with Celta de Vigo was the joint-highest scoring Barcelona match since their return. However, it was also the first in which any of the scoring came from the opposition. This led to another gut-wrenching result, and the goals left much to be discussed.

Barça came into Saturday’s match against Celta de Vigo knowing there would be no easy victory, even against a celeste side near the relegation zone. In the blaugranas four previous visits to the Estadio de Balaídos for La Liga matches, they gained just one point in total. Unfortunately, those struggles could not be reversed. Despite some very encouraging play from the Catalans, their defense ultimately collapsed. There were goals involving ingenuity, poor defending, and controversy, that will now be analysed.

After a solid start, Barcelona took the lead relatively quickly in just the twentieth minute. The build-up to the goal began with Lionel Messi cutting in from the right side of the pitch. After dribbling to a central position, the Argentine split two Celta defenders with a pass ahead to Riqui Puig.

After showing his positional awareness by finding the space in the defense, Puig showed his brilliant technique. With one touch of his right foot, the youngster flicked the ball behind him to Arturo Vidal, without even having to turn. A quick and subtle piece of skill, but impressive nonetheless. The Celta centre-back, Nestor Araújo, then fouled Vidal from behind trying to win the ball. This set up a free-kick for Lionel Messi in a very dangerous position, which certainly did not play out as one would have expected.

Knowing the danger Messi possesses from that area, Celta set up to do everything possible to stop him from scoring. Behind their three man wall was the keeper and the other seven outfield players – two of which were set on the goal line. Even for Messi, it looked impossible to score, so he passed instead. That’s right, the world’s best free-kick taker passed a direct free-kick from just over twenty yards out, and it was truly brilliant.

The Argentine had spotted his main partner on the pitch, Luis Suárez, in open space at the back post. The Celta defender closest to Suárez stayed on the line, and was solely anticipating a Messi shot. This left the Uruguayan open by at least a few yards, and he was never going to miss that target.

El Pistolero made no mistake with the finish, as he headed the ball in for his twelfth league goal of the season. This was Barcelona’s first goal from a free kick since football resumed, and who would’ve thought it would come like this. Some nice play to win the set piece followed by a truly magical linkup between Messi and Suárez made it a very nice goal, and it looked as though Barça were on their way to a win.

The first goal conceded by Barcelona since the return of La Liga, and the one that broke a five match clean sheet streak, came from a combination of errors. It all began with Barça calmly in possession, and Iván Rakitić on the ball in midfield. Then, inexplicably, with no pressure on him, the Croatian tried to force a pass across the middle of the pitch to Riqui Puig. Celta midfielder Brais Méndez read it like a book, and stepped in to intercept the ball.

Brais Méndez tapped the ball off to Celta’s number ten, Iago Aspas, who controlled it and turned forward just inside his own half. The Celta captain scanned the field and saw the run of midfielder Okay Yokuşlu being made in behind the Barcelona back line.

The second big error by a Barça player came from Samuel Umtiti. The Frenchman, in the line-up for this match in place of Clément Lenglet, tried unsuccessfully to anticipate the pass of Aspas. Instead of staying deep to allow the defense to regroup after losing possession, Umtiti stepped up to mark Brais Méndez. This left a massive amount of space behind him, and Gerard Piqué had no chance to step up to make Yokuşlu offside.

After the simple through ball was played by Iago Aspas, Gerard Piqué was left alone against two Celta attackers. Yokuşlu drove into the penalty area with the ball on the right side of the pitch, while the striker, Fyodor Smolov, was unmarked to the left. A square ball across the box gave Smolov a simple tap in, and erased the Barcelona lead.

It was a truly disappointing goal for Barça to concede, as it stemmed from two easily-preventable mistakes. Despite being one of the squad’s best performers in recent matches, Rakitić has to take some of the blame for this goal as he should never be losing the ball from that position. The lack of match sharpness from Samuel Umtiti was then on full display, and the positioning of the Frenchman was atrocious.

Celta did show quality and directness with this attack, going from midfield to goal with just three passes between four players. However, it’s hard to argue that this was just as much Barça throwing away the lead as Celta earning an equaliser.

With each passing minute after the equaliser, the nervousness among culés continued to grow. In the sixty-seventh minute, most of these nerves were settled again. The attack stemmed from a misclearance by the Celta goalkeeper, giving the azulgranas a throw in deep in the opposition half. Following some passing down the right side of the pitch, Ivan Rakitić looked to play Luis Suárez, who was just outside the box.

Luis used his body well to box out his marker and open the lane for the pass. Rakitić then played it, splitting to Celta defenders. At first, the attack looked like a failure, as Suárez attempted a first time pass to Nélson Semedo, which was intercepted. Fortunately, Semedo utilised some solid counter pressing to win the ball back from former Barcelona player Denis Suárez.

From Semedo, the ball went to Lionel Messi. The Argentine had quietly drifted into the box as the sequence played out, and he pounced on his opportunity. With a first time pass, Messi cut the ball across to Luis Suárez with his right foot.

With his back to goal and a defender tight on him, Luisito still had much work to do. In order to open up that sliver of space he needed to get a shot away, Suárez faked as though he would receive the ball on his right foot. This would have had him still with his back to the goal. Instead, the number nine let the ball roll across his body while pivoting around to face towards goal.

This brilliant manoeuvre by Suárez gave him just the space he needed to fire a shot low into the bottom corner. The goal gave Semedo a secondary assist and Messi another assist to his mate. Coming from just two connected passes between three players, this goal seemed to sum up Barça’s recent performances: far from beautiful, but it got the job done. Unfortunately, this job was not done.

In the eighty-eighth minute, just a few away from a crucial three points, a dagger was thrust into Barcelona by Iago Aspas. The goal stemmed from a Celta attack down the left wing. A deflected pass from Nolito out wide took a kind bounce for Celta and found its way to Rafinha Alcântara. The La Masia product and former Barcelona player received it in a dangerous position.

With Rafinha on the ball, Gerard Piqué was forced to step up and close him down, creating a one-on-one situation. The centre-back attempted a sliding challenge, and Rafinha knocked the ball far ahead and to the left. This is where the controversy comes from.

Whether it was smart or not of Piqué to go to the ground, he clearly did not commit any kind of foul. After tapping the ball into no man’s land, Rafinha kept running straight into the challenge of Piqué. Even then, there was barely any contact, but Rafinha went down and a free-kick was given.

The Celta talisman Iago Aspas stepped up to take it, and curled his shot around the wall into the bottom left corner. There was absolutely no chance of a Marc-André ter Stegen save, but it seemed as though Antoine Griezmann actually could have stopped the shot. While it may be reaching to put the blame on the Frenchman, he was positioned on the outside of the wall, and his jump took him away from the ball.

While the wall perhaps should have done better, take nothing away from the strike by Iago Aspas. A player with so much quality, and he showed it again here with his shot just squeezing inside the post. It was a true heart-breaker for Barça fans, and another massive blow in the title race.

Without a doubt, the one thing every culé should learn from this match is the importance of Clément Lenglet. With him on the bench, Barcelona’s defence gave up a multitude of chances, and his replacement, Samuel Umtiti, was at fault for several of them. With his superb positioning and reading of the game, Lenglet is truly a player who isn’t fully appreciated until he isn’t playing.

While the result is undoubtedly a massive negative, there were some bright spots for Barça. In terms of the goals, Luis Suárez ended a three game scoring drought and reminded everyone how deadly his partnership with Messi can be.

In the build-up to the first goal and throughout the match as a whole, the quality of Riqui Puig was once again on display. Despite his youth, Puig just oozes confidence on the ball and experience well beyond his years. His flick leading up to the opener was just a glimmer of the dynamism he brings to the squad.