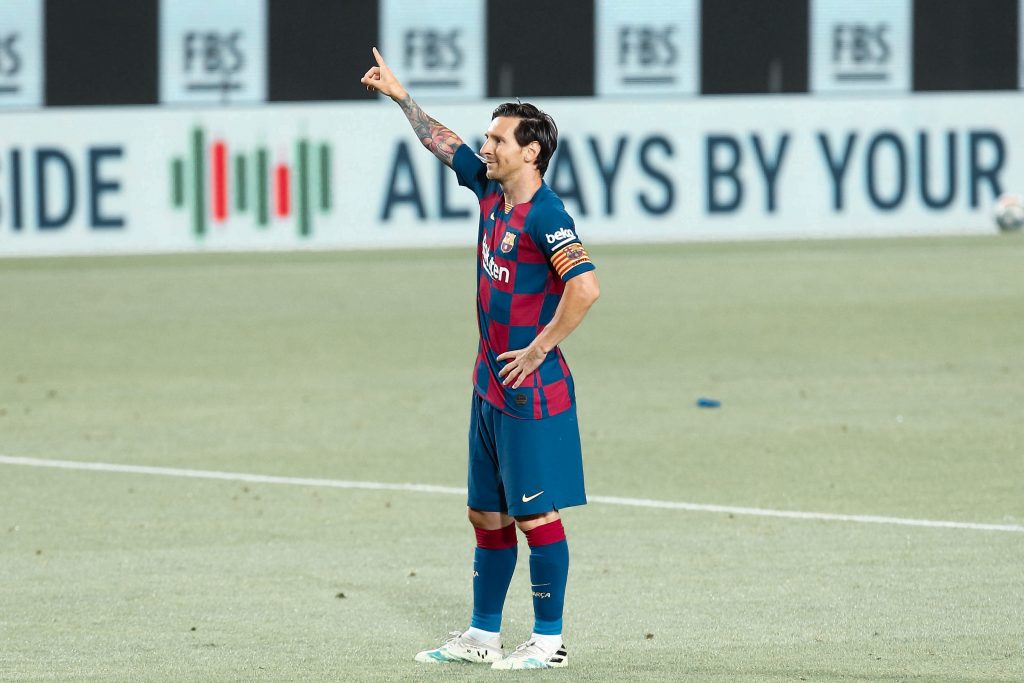 While the global performance was nothing out of this world, Barça managed to get the job done at home. This analysis will provide a deeper look at how the two goals from Barcelona were scored in the 2–0 win against Leganés.

In the first match back at the Camp Nou since La Liga’s restart, Barcelona were able to get another crucial three points with a 2–0 triumph over Leganés. There wasn’t as much excitement or goal scoring as in the Mallorca game, but the two goals still left much to be analysed.

It took Barcelona until the 42nd minute to break down the deep-lying defense of the Madrid side. This caused some nerves to grow among culés, as Barça were having far more trouble creating chances than they did against Mallorca. That is until Ansu Fati, the phenom, stepped up once again and grabbed a crucial opening goal.

After searching unsuccessfully for a breakthrough for over 40 minutes, it was Sergio Busquets who provided the initial spark for this goal. After receiving the ball from Lionel Messi, Busi played it out wide to Junior Firpo. This gave him just the time he needed to scan the field and find his next pass. When Firpo returned the ball to Busquets, he used his brilliant vision and technique to play a first-time, line-splitting ball to Messi.

The ball from Busquets was perfectly weighted for the Argentine to receive it in a space between four Leganés defenders – and even the referee. Messi settled the ball with one touch and opened his body towards the sideline in the same action. This allowed him to spot the run of Junior Firpo, who had already began to drift behind his marker.

With his second touch, Messi relayed the ball on to Firpo. As Firpo arrived to the pass just inside the box, a scramble occured as two Leganés defenders fought to win the ball away from him. But, the left-back showed great tenacity and perseverance to retain possession in the end. After showing his grit, Firpo showed some quality.

With the two previous Leganés challengers now behind him, Firpo forced the opposition centre-back, Chidozie Awaziem, to step to him. This left Ansu Fati with plenty of room to receive the ball. Junior was able to recognise this quickly, and with a deft touch he laid it off to the seventeen-year-old. Fati took one touch, opened up to goal, and fired his shot into the bottom right corner.

If it is deemed that Junior Firpo did not lose possession and then regain it, but simply fought off the tackles, then the sequence leading up to this goal included ten passes between six players. Busquets showed his quality and importance with his line-breaking pass to Messi, who then registered the secondary assist with his through ball to Firpo. The goal serve as a massive confidence-booster for both Junior Firpo and Ansu Fati going forward. This also made it two straight matches in which the opener was assisted by Barça’s left-back.

In the end, this goal will go down as penalty, but the creation of it was truly remarkable. Another pretty long build-up, there were seven connected passes, involving seven players before the penalty was won. The sequence began all the way at the back, when Marc-André ter Stegen gathered the ball following a Leganés clearance. The keeper played Clément Lenglet, who then looked to move the ball forward. The Frenchman was able to pick out Iván Rakitić, then playing as the pivot, between the lines.

Rakitić received the ball between the two strikers of Leganés and their midfield line. This caused one of the opposition midfielders to press the Croatian. But Rakitić stayed composed and did well to progress the ball again to Arturo Vidal. The Chilean then played a simple lay-off to Lionel Messi, and what ensued was pure genius.

When the ball was travelling to Messi, there was already a defender coming in hot. Messi, as always, stayed calm and anticipated the weight of the pass, allowing it to roll across his body before taking a touch.

The defender was completely thrown off, and Messi had created space to begin his march forward. Of course, there were still six Leganés outfield players between Leo and the goal, but he was not going to be denied.

Messi chose the route to the right, seeing the space available if he could beat the next defender. To do this, Leo tapped it through his legs, leaving him on the ground while the Argentinian continued forward. He was then grabbed by another Leganés defender, and could have gone down to win the free-kick. Nonetheless, that is not the Messi way. Instead, he quickly stopped to get out of the grabbing defender’s reach, before re-accelerating past him and leaving him in the dust. It would have been a great run if it had ended there, but Messi continued.

He was then back up to top speed, approaching the edge of the box. Leo knew that at this point he couldn’t continue dribbling, but he also knew that the speed he had built up would not be able to be matched by the static defenders. So he tapped the ball off to his partner in crime, Luis Suárez, and continued his sprint into the penalty area. The Leganés defenders had no choice but to foul him, and Messi was brought down as he was going after the return pass played by Suárez. Composed from the spot, the number 10 got his goal, and continued his 100% penalty conversion rate for this season.

While the first goal showed the quality of several players as a collective, this one was all about individual brilliance. It did start with Barça playing out from the back and breaking the lines quickly, but from there it was all Lionel Messi. Even at 32, Leo is still capable of those incredible runs, and this was just another testament to his excellence.

Since the restart, a clear majority of Barcelona’s goals have come from the left side. Ansu Fati’s goal was created down the left, and so were three of the goals in the Mallorca match. Additionally, none of the goals have been created by playing down the right wing. Lionel Messi did dribble to the right before winning his penalty, but there was never any combination with someone out wide, and he had started off in a central area.

Maybe the right side has been unlucky – Sergi Roberto played well and got into many dangerous areas against Mallorca, and Semedo had an assist called back by an offside of inches – but the blaugranas do appear to be stronger when attacking from the left.

Another observation would have to be the rejuvenation of Messi. Before the break, it seemed as though he dropped a level from his usual performance. Now, Messi is fully energised. No, his last two performances haven’t been his best ever, but the fire is back in him, and he has been much more dynamic. Heavily involved in the goals again today, opposition defences should now be getting even more scared of La Pulga.