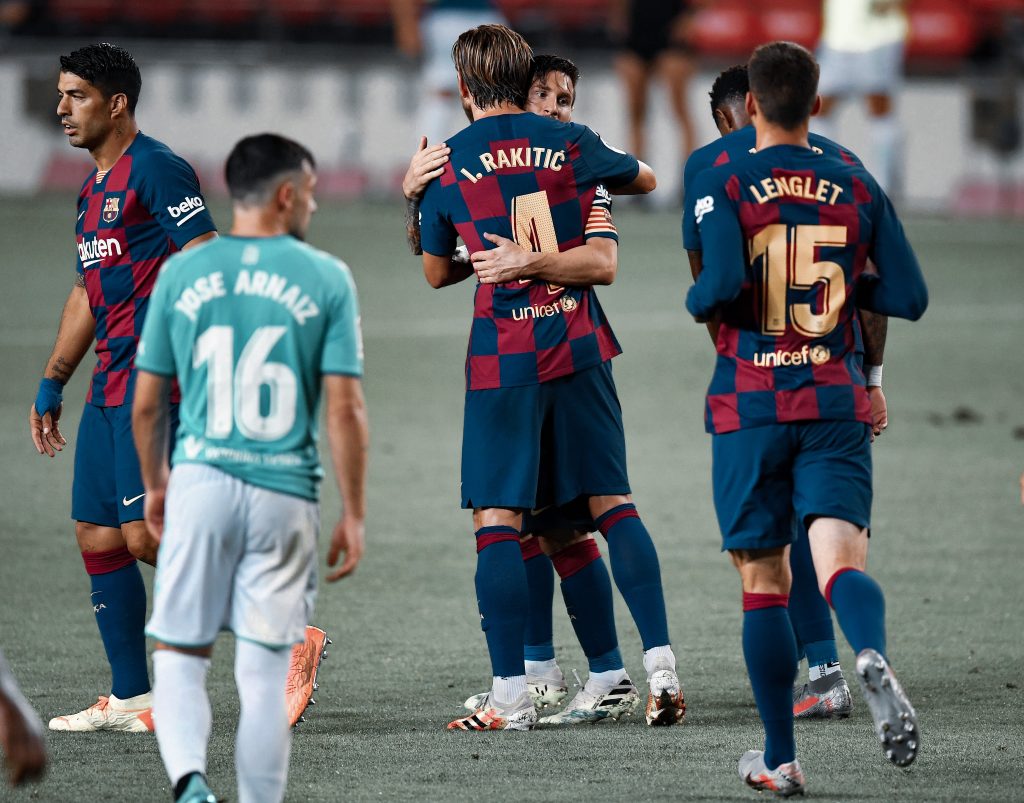 The final nail in the coffin for Barça’s title hopes was finally delivered with a loss at the Camp Nou, and a Real Madrid win. In addition to the result against Osasuna, the goals themselves showed, once again, a dysfunctional attack and a vulnerable defence from Barcelona.

For the last home match of the La Liga season, Barça came in desperately needing a good performance. Even if the title was out of their hands, the blaugranas had to build up some momentum and positivity for the coming Champions League fixtures. Instead, against Osasuna it was more of the same uninspired, predictable football seen in recent matches, perhaps even worse. Let’s look further into the goals of the 1–2 defeat from Barcelona at the Camp Nou to see just where it went wrong.

Just fifteen minutes into the match, Osasuna took advantage of Barça’s poor defensive transitions to take the lead. The build-up began with Osasuna winning the ball in their own half, and after two quick passes they were attacking down the left wing.

From there, the left-back, Pervis Estupiñán, utilised his pace and made a run towards the corner. The ball was played into his path, and just like that, Osasuna were in the attacking third. Estupiñán surged forward out wide, while multiple attackers made runs into the box.

One of these runners was the former Barcelona B standout, José Arnaiz. Just drifting into the penalty area, Arnaiz ended up in a large pocket of space between Clément Lenglet and a recovering Iván Rakitić.

Estupiñán made no mistake with his delivery, as he cut the ball back for the open Arnaiz. The forward still had a lot of work to do with his finish, as the ball bounced up on its way to him. But he was able to volley it into the back of the net with a first time shot on his right foot.

In similar fashion to many of the recent goals against Barça, Osasuna used pace and direct play to go from their own half to goal in just four passes. It was all far too simple for the visitors, with plenty of poor positioning and anticipation by the Barça backline. The goalscorer being a former player of the club rubbed even more salt in the wound.

With around thirty minutes remaining in the match, Barcelona were able to find an equaliser. After some central build-up, Luis Suárez was able to draw a foul in a dangerous position. From twenty-four meters out, just to the left side of the pitch, Lionel Messi stepped up to take the set piece.

While they did have a player lying down behind the wall, Osasuna elected to let Messi have a go, and not drop players back towards the goal. Leo had come close with an earlier effort, and this one found the back of the net. It was a vintage Messi free-kick, as it rose up and over the wall before curling in off the left post.

Barça were still unable to break down Osasuna from open play, but the equaliser was there from some Messi magic. There seemed to be at least some hope that the azulgranas could build off of the goal and finish the match well. However, that was certainly not the case.

Despite Osasuna going down to ten men due to a seventy-seventh minute red card to Enric Gallego, Barça’s attack remained unsuccessful with their efforts. Even as more and more players were thrown forward in search of a winning goal, it just would not come. In the end, this desperation from Barça ended up costing them, as Osasuna finished off another counter attack.

It began as Barça were attacking with only Sergio Busquets and Clément Lenglet remaining deep. This meant that whenever Los Rojillos won the ball back, there was danger of a counter. That’s just what occurred, as the visiting side won the ball and played a high clearance down the left side of the pitch. While Busquets won the ball initially, massive problems for Barcelona followed.

With the ball dropping out of the air and being faced towards his own goal, Busquets had limited options. First, he was being pressed too hard to safely bring the ball down and control it. For passing options, a first time ball back to Marc-André ter Stegen would run too much risk of being intercepted, and Lenglet was also being closed down. So, Busquets decided to head the ball backwards up the pitch.

Under normal circumstances, this is certainly the safest option, as it eliminates the immediate danger. Except, not a single Barça player had dropped into a deeper position in the time since the ball was lost. There were zero Barça players in a midfield area, while multiple were still off-sides. This meant that the header of Busquets went right to an Osasuna player, who had no pressure on him.

From there, the counter-attack was on, and only Lenglet, Busquets, and Alba were behind the ball. Osasuna used their numeric advantage wisely, carrying the ball forward and maintaining proper width. After Busquets was forced to step up and press, the ball was played out wide to the left wing.

As Lenglet stepped out, and Jordi Alba was unable to recover in time, Roberto Torres made his run unmarked into the box. The ball was played across by Kike Barja, and Ter Stegen could do nothing to stop the close-range finish of Torres.

Osasuna had the lead, and ultimately the three points, as Barcelona were undone by another counter-attack. This time it took only three completed passes for Osasuna to get from their half to goal, and pile on even more disappointment for culés.

Even with the introductions of Ansu Fati and Martin Braithwaite to the line-up, Barcelona’s attack performed poorly once again. They were unable to break down the Osasuna defence from open play, and couldn’t create any clear-cut chances. With just three goals in the last three matches, and two from open play, Barça’s attack has regressed again since the improvement shown against Villarreal. The right attacking formula has to be found quickly, or else a quick Champions League exit is on its way.

Unfortunately, Barça’s defence wasn’t very good either. Defensive transitions and stopping counter-attacks are a real weakness for this ageing side. Atlético de Madrid, Celta de Vigo and now Osasuna have all taken advantage of this in recent matches against Barça. Looking ahead to the Champions League, where there are sides with even more dynamism and attacking quality – think Bayern Munich – this spells trouble for the blaugranas.