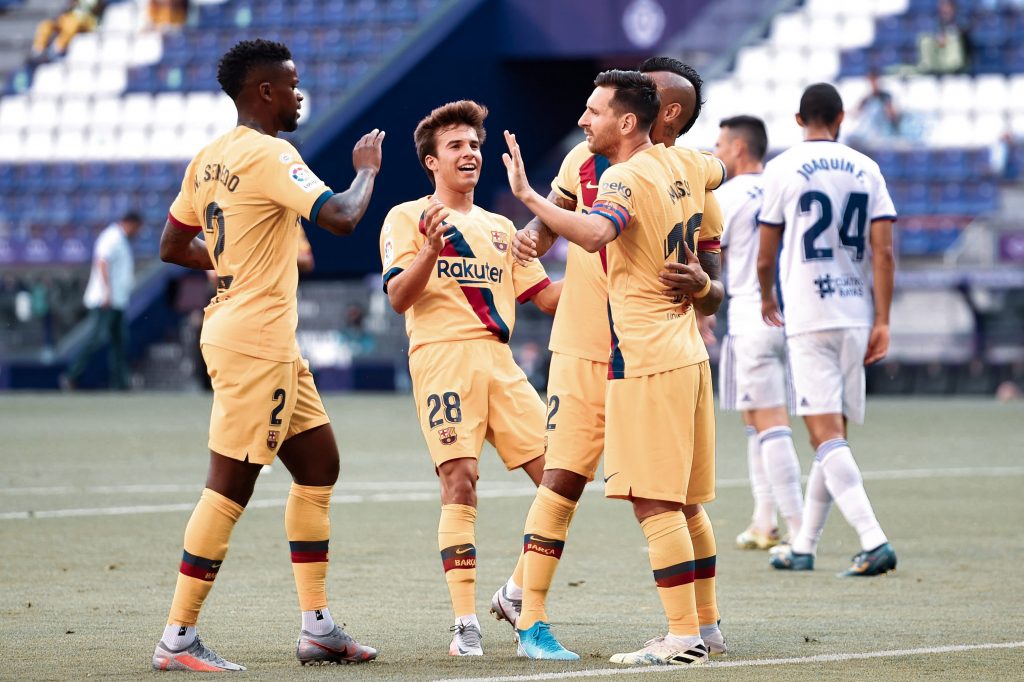 Barcelona were able to pick up their third consecutive victory, but once again by a slim margin of victory. Let’s go deeper in this analysis into how Arturo Vidal’s winning goal was created, assisted and finished off by Barcelona against Valladolid.

With Barcelona looking lacklustre for most of the previous match against Espanyol, improvements had to be made heading to Valladolid. To try and make these improvements, Riqui Puig and Arturo Vidal replaced Luis Suárez and Iván Rakitić in the starting eleven, and the system was tweaked by Quique Setién.

Barça’s start to the match was positive, and the adjustments seemed to pay off with an early goal. However, that ended up being the only one of the match, and the team once again dropped off as the game progressed. Nonetheless, this is how Barça got their goal in a 0–1 victory over Valladolid.

It all started in the 14th minute with Barça attacking down the right side of the pitch. At first, Valladolid were able to win the ball off of Arturo Vidal after he received a flick-on from Lionel Messi, but the blaugranas then utilised some counter-pressing. When Sergi Roberto, right centre-back in a back three, eventually won the ball back, Barça were in a great position to go towards goal.

There were four Barcelona players in a tight area, but they were able to make the right decisions quickly to manoeuvre out of it. Sergi Roberto first played the ball to right-back Nélson Semedo, who then laid it off for Messi, who had dropped behind him. With Messi on the ball, the attention of the Valladolid defence shifted almost entirely to him.

As the Argentine began to dribble forward, two defenders closed in on him from either side. Unfortunately for Valladolid, the defender behind those two – Javi Sánchez, wearing number five – failed to step up and mark Arturo Vidal. Of course, when you give Messi even a sliver of space to find an open teammate, he will take advantage of it.

That’s exactly what Leo did, as he scooped the ball between the two defenders, over their outstretched legs, and right to the feet of Vidal. The Chilean took one touch to get the ball out of his feet before firing the ball low and across the goal.

It was a perfect strike from Vidal, as it bounced off the inside of the far post and into the back of the net. While there were only three connected passes between four players in the buildup leading directly to the goal, it was still a brilliant piece of quick play and ingenuity from Messi to create it.

Even the pressing to win the ball back was admirable, something which can’t be said much about Barça’s play in recent years. With all this in mind, it seemed like a great Barcelona performance was in store, but the team just couldn’t build off of the momentum of the goal.

The main positive here is yet another Lionel Messi assist. While this one wasn’t a long through ball or following a vintage dribble, the composure and technique required are still very admirable, even for his standards. As Leo continues to create, that made it twenty La Liga assists for the season, equaling the record held by Xavi Hernández. With eight of those assists coming in the nine matches since the return of La Liga, Messi sure looks set to break another record.

As for the negative side, it was once again a slim victory with the attack producing just one goal. While the performance was better than the Espanyol match, this Barça side has to get better at taking advantage of their positive starts, as well as continuing that level of play throughout the match. Far too often in recent matches, the performance has declined after thirty minutes or the first half, which is unacceptable if you want to be a truly elite side.