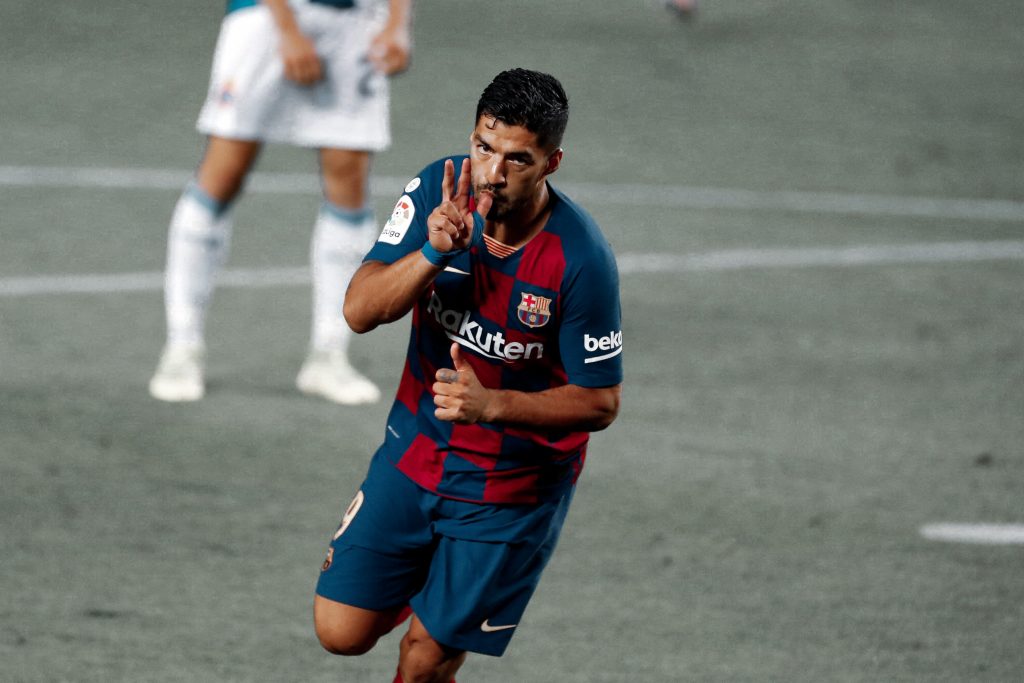 In the last Barcelona derby for the foreseeable future, Barça were able to confirm the relegation of their city rivals and pick up another three points. The match between Barcelona and Espanyol didn’t provide much entertainment in terms of scoring, but through this analysis let’s go deeper into the creation of the winning goal by Luis Suárez.

Wednesday’s 1–0 win against Espanyol certainly wasn’t the performance Barcelona fans were hoping for to build off of the great display against Villarreal. Especially in the attack, the set-up that had worked so well in the previous match failed to reproduce the same effectiveness. It took until the fifty-sixth minute to finally break the deadlock – at which point Barça had already put three past Villarreal. Nonetheless, this analysis will show how the solitary goal from Barcelona against Espanyol was created and scored.

The move leading up to the goal began all the way in the back, with Gerard Piqué intercepting a through ball and passing back to Marc-André ter Stegen. After some buildup and circulation of the ball, it was switched across the midfield from right to left, from Ivçan Rakitić to Sergio Busquets. Busquets kept the ball moving out wide to Jordi Alba, which is where the danger began with some movement in the attack.

When Alba received the ball, Espanyol’s right wing-back stepped out to press him. This left the right centre-back marking Suárez, who then began to check in towards Alba. The defender followed the Uruguyan, which meant that the two defenders on the right of Espanyol’s back five had been pulled out towards the wing. Antoine Griezmann saw this, and exploited the space left open by the movement of Suárez.

The Frenchman was far quicker to react than the other Espanyol defenders, and he burst into the gap that had just been left open before they could shift over. Spotting the run, Jordi Alba played the ball into Griezmann’s path, where he received it deep inside the penalty area. While the Frenchman didn’t have a clear angle for a shot or pass, he did well to find the right option.

Griezmann, returning the favour for Lionel Messi’s assist to him against Villarreal, back-heeled the ball into the Argentine’s path. Messi got to the ball before the defender and was able to get a first time shot away. This shot looked to be goal-bound, but it was blocked by a second Espanyol defender. Fortunately for Barça, the rebound fell right to Suárez.

The number nine was never going to miss from there, and he fired the ball into the semi-empty Espanyol goal. That made it fifteen La Liga goals on the season for him, and four in the last four matches.

While dynamic attacking play was lacking for Barcelona for most of the match, that wasn’t the case here. There were a total of fourteen connected passes in the possession leading up to Messi’s blocked shot, as the play was built up from all the way in the back. The movement of the attacking trio, especially Griezmann, and the vision for the pass into the box by Jordi Alba made this a very solid goal.

While the Villarreal match showed so many positives, especially up front, the limitations of this Barcelona side were once again on display against Espanyol. The attack, which seemed to be creating chances for fun last match, went back to a more bland, unentertaining state. Quique Setién will have to realise that the same system won’t work against each opposition, and adjustments have to be made.

The low defensive block of Espanyol was able to stifle almost every Barcelona attack, and even able to win the ball in good positions to counter. Looking back, beating that type of opposition seems to require the type of intelligence and dynamism which could have been provided by Ansu Fati and Riqui Puig.

While it was unlucky for Fati to be sent off so quickly, it was unfortunate for Puig not to get the chance to continue his excellent form. Hopefully Setién will tweak his tactics more going forward to include the right profiles, and in turn create more goals.