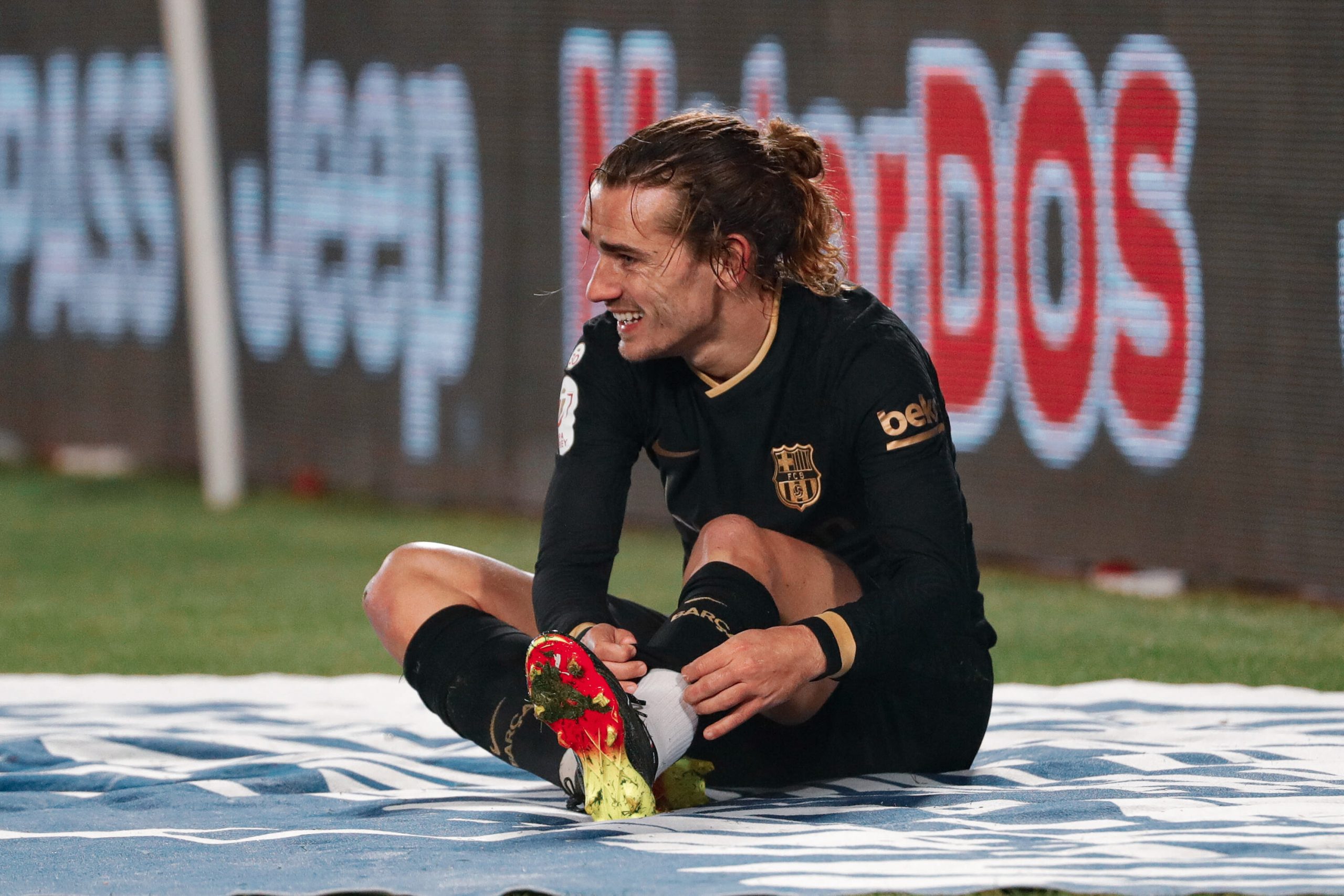 An analytical look at how the in-form Frenchman should be utilized in order to continue to maximize his performance.

Life at the Camp Nou certainly did not get off to the best of starts for Antoine Griezmann. An inconsistent debut season in which the club failed to claim a single trophy was not what fans would expect from a signing of the World Cup winner’s pedigree and price tag.

The beginning of this season, too, was plagued with shaky form and low production. However, more recently, there seems to have been a sizable uptick in the Frenchman’s output and happiness on the pitch. He has brought about a French revolution in recent weeks, helping Barcelona believe.

This has been on display in key performances in the Spanish Super Cup, late heroics in the Copa del Rey against Granada, and increased end product in La Liga. For many, this recent version of Griezmann is reflective of the quality player Barça decided to splash the cash for.

Griezmann: “I know I have the confidence of the coach and my teammates, that is the most important thing.” pic.twitter.com/pZvg482o7P

With that in mind, how can the club keep this form going? Is it sustainable in the long run? Where should be Griezmann playing? To answer these questions, it is time to dive into the numbers that reflect the forward’s form, as well as the tactics that influence it.

Getting better with time

The Frenchman’s start to life under Ronald Koeman brought the same worrying signs as the previous campaign – perhaps even worse. It would take Griezmann until his sixth La Liga appearance of the season (seventh total appearance) to record his first goal or assist.

On the flip side, his last 11 competitive matches have yielded 13 goal involvements. With this incredible reversal of fortune, it still has to be asked, though: Has this recent run of games been a lucky hot patch, or has their been actual improvement to his underlying performance?

To test this, we can examine Griezmann’s non-penalty expected goals – a measure of how likely a shot is to result in a goal based on factors such as the distance and angle to goal, the positioning of the goalkeeper, and more.

Additionally, we can gain insight into his chance creation using his expected goals assisted. This applies the same logic as expected goals, but to the shots which were assisted by Griezmann rather than taken by him.

Courtesy of Football Reference, here is Griezmann’s expected attacking output in this season’s La Liga and Champions League on a five-match rolling average:

Both his expected scoring output and expected assisting creation did begin to peak around the midway mark of the season thus far, before cooling off a bit. However, Griezmann’s numbers are back on the rise, and they remained far better than his early-season woes.

It is also important to keep in mind that this data does not include Super Cup or Copa del Rey matches, where the former Atlético Madrid man has been most dangerous.

So, Griezmann has not simply coughed up a few lucky goals and assists, but improved significantly in terms actually getting into positions where he can make those dangerous plays. This goes a long way into making his form sustainable down the line.

In addition to getting more involved in the end of attacking sequences, the French international has become more effective in the build-up phase. For that, we can look into his progressive passes and progressive carries, which reflect how often he passes or dribbles the ball significantly closer to the opposition goal.

Once again, there have been clear improvements following a mediocre start to the campaign. He has grown further and further out of his shell, giving him more confidence to look up the pitch instead of playing more pragmatically.

See Griezmann’s assist to Lionel Messi against Granada in La Liga matchweek 18. He initially picks up the ball all the way back in the defensive half, before driving forward towards the attacking penalty area. He then has the composure to release the ball to the Argentine at the correct moment, setting up a goal.

This resurgence really boils down to improvements in a few key areas, all of which are interconnected: positioning, involvement, and confidence. Knowing that it has not just been a crazy few matches where Griezmann has randomly banged in some insane finishes, the questions now become:

In recent weeks, Ronald Koeman has been utilizing Griezmann either on the left or in the centre of the attacking trio. This contrasts his positioning on the right to start the season, in addition to the traditional winger profile at Barça.

The likes of Ansu Fati and Lionel Messi are examples of the inverted winger that has grown to be associated with the Camp Nou. These players utilize their dynamism in one vs one situations to cut inside on their preferred foot before looking to shoot or pass.

The thing with Griezmann, though, is that he clearly does not match that profile. The Frenchman has not averaged more than one successful dribble per 90 minutes in any of the last three La Liga seasons. Messi, on the other hand, has not dropped below four per 90, and even Fati is averaging 2.35 in his young Barça career.

With that in mind, it does not make sense to force the World Cup winner into a role that relies on such attributes. By placing him on the left, these deficiencies can be minimized in a couple of key ways.

The first is that Jordi Alba can provide much of the width and pace down that flank. Secondly, playing on the left, with Messi’s vision on the opposite side, one can provide as much value off the ball as they could on it.

This was on display for Griezmann’s heroics in the Copa del Rey against Granada. For both goals at the end of regulation, his runs into the penalty area were spotted and found by a Messi pass over the defence.

In a slightly different fashion, Griezmann was able to cut open Real Sociedad in the Super Cup. Still on the left, but more tucked in, the former La Real forward made a run off of Martin Braithwaite. The ball was played into his path, and an assist to Frenkie de Jong ensued.

From an analytical perspective, these types of passes show up in Griezmann’s most frequent pass clusters – the types of passes he completes most often based on their start and end locations.

That third cluster in blue mainly reflects how Griezmann can be influential on the left. There, he does not have worry as much about beating defenders and finding a defence-splitting pass. Rather, the Frenchman can rely more on his off-ball movement to get down the flank and into the penalty area, before playing more square passes on his left foot.

For one last example, let us look at how these same concepts can apply to Griezmann in a central role. For his assist to Messi against Rayo Vallecano, the Frenchman started from deep in a very typical centre forward area. With a quick cut and run in behind the defence to the left, he set himself up to play a simple square ball to the Argentine.

While Griezmann is not a typical Barça attacker, that does not mean his skillset can not provide value to the team. Recently, it must be said, it has actually helped make the side more unpredictable.

By keeping the French international further to the left, but not forcing him to play like a traditional inverted winger, Griezmann’s intelligence and ability as an off-ball runner can be maximized.

Sharing space with Messi is not always bad

A common theme in the history of Barcelona and positional play is stressing the importance of balance and spacing. This is, of course, beneficial, as it stretches out the defence and opens up gaps.

However, where some tend to take things too far, is thinking that any two players occupying the same area is automatically a sign of disorganization and poor awareness. This is something that can tend to happen with Messi and Griezmann.

Some of Griezmann’s top clusters for passes received show him getting the ball in traditional “Messi” areas.

Some of this can be attributed to Griezmann starting the season on the right and drifting over when Messi is not in the team, but not all of it. For instance, in the 4-0 victory over Granada, there was quite a bit of overlap between the areas where the two attackers played their passes from.

How did that match play out, though? In addition to the massive victory over a formidable opponent, both Messi and Griezmann ended up netting a brace, with Griezmann assisting one of the Argentine’s goals.

But, how can a partnership like this work without the two players simply getting in each other’s way and making things too compact? The key lies in Griezmann’s unique profile.

Simply put, Griezmann is not a ball-dominant player. Not in the way the likes of Dembele, Pedri, or Messi are. He loves to split defences through passes, not by dribbling past them. As mentioned previously, he rarely looks to take on defenders, he often does not take many touches on the ball, and he provides a lot of value with his positioning and movement.

In contrast, Messi will always be the ball-dominant force in the Barça side. Because of this, it can actually be very beneficial for the two to drift close to each other at times.

Take this example from the Copa del Rey match against Granada. Messi receives the ball centrally, turns, and holds it up while scanning for options. After a few seconds, he cuts to the right and slips the ball into Griezmann, who has checked in from the edge of the penalty area.

The Frenchman returns the ball to Messi with a first-time pass, where he then tries to knock the ball ahead to Braithwaite.

While the partnership can definitely flourish when spread over long distances with those aforementioned Messi through balls, the two also complement each other well in more contained areas.

This is particularly important to remember when Griezmann plays at centre forward. When Messi drifts inside, things can look very congested, but the understanding of spaces and movement between the two is growing, which can be crucial when breaking down defences.

The feelings of Barça fans towards Antoine Griezmann have become far more positive recently, and rightly so. He has become far more influential across multiple competitions and against a variety of opponents, and he has done so in a manner that can not be attributed to variance or luck.

Statistically, the Frenchman’s numbers for the 2020/21 season are even stacking right up to those from his final years at Atlético Madrid.

To keep this up, it seems the best course of action for Ronald Koeman is to stick with Griezmann at centre forward or as a left-winger who stays tucked inside. This formula has worked well recently to play to Griezmann’s strengths, while not forcing him to utilize his weaker attributes constantly.

If the Frenchman’s confidence and connection with his teammates continues to grow, his second season at the Camp Nou could end in a much brighter spot than his first.