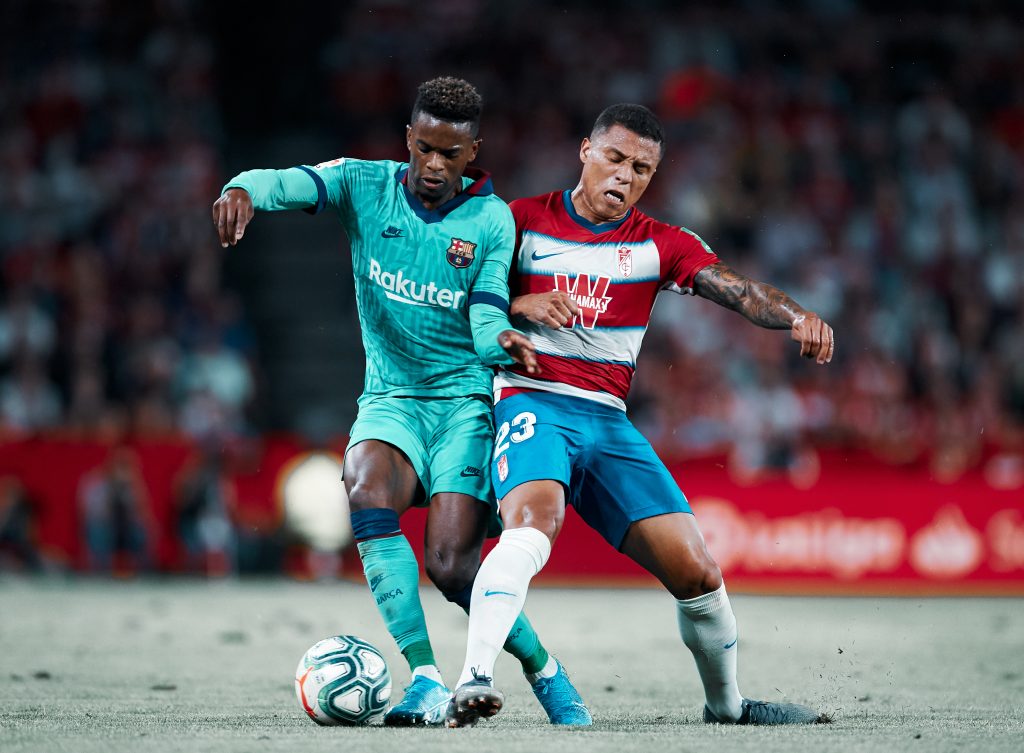 In recent times, the acres of space left behind by the full-backs, exploited by rivals in counters, have been one of the major problems for Barça defensively. How could they solve it?

Barcelona were never a team known for their defensive solidity. It is their charismatic possession game and quick, strategic passing that earned them their praise under Pep’s Positional Play system. But it is their defence that is taking down the mighty culés. Even after replacing Valverde by Setién, their defensive woes continue. Here, we will analyse Setién’s game style and the errors that continue to riddle Barça’s backline.

Dani Alves was one of the best full-backs of his time and replacing him was never going to be easy. But it is the hole left by him that continues to bug Barcelona. Initially, it was Sergi Roberto tasked with handling the right-back position, and later on Nélson Semedo. Both have their quirks with Semedo excelling with his blistering pace and skills, and Roberto being a more traditional Barcelona player thriving in the passing game while also maintaining a reasonably rigid defence thanks to his positional awareness. They are a good pair of options to have with their skill sets matching the various situations that a team might encounter. Yet in reality, a clear lack of prowess in the position is seen with neither of the two anywhere near a full-back of the quality of someone like Trent Alexander-Arnold. Each have their moments, but it is consistency where they fail to impress.

An analysis of Setién’s 12 games in charge paints a definitive scenario. Of the 11 goals conceded, the majority are from counter-attacks and penalties. This is pretty much expected from a team like Barcelona who dictates play and has the majority of the possession. But the staggering fact is that, in a lot of those counter-attacks, it is the wings that are left exposed.

Quique Setién is known for his risky and exciting brand of football built on Cruyff’s ideologies. His sides often like to maintain possession, holding a high backline. He uses the full-backs to push forward, allowing the wingers to drop in and form triangles. Generally speaking, Busquets drops in between the centre-backs and Messi dictates play, with a striker finishes the moves. But when they lose possession, the azulgranas are vulnerable to counter-attacks. Especially as teams use the wings to break Barcelona’s defence. Pacey wingers rush down the wing and towards the centre, latching onto through balls played over the backline. With neither the centre-backs nor Busquets having the pace to keep up with the opposition players and both full-backs caught high up the pitch, it is Ter Stegen’s quick thinking and ability that saves Barça often.

Without Alba or Semedo to track runs, speed is a lethal weapon at the hands of rivals. Alba is the main attacking full-back with his connection with Messi widely known. However, defensively, a detailed look suggests that Barcelona are susceptible to a predictable yet deadly tactic. Good interplay between the midfielders leads to the ball reaching the right winger, who then crosses the ball into the box. With Alba or Firpo up front, it is Lenglet or Umtiti who tries to put pressure on the winger. Piqué then moves in to cover for the previously mentioned players. Roberto or Semedo are then forced to move inside to support Piqué with the left winger now completely free. It is easy to score with the luxury of space afforded to the player. The goal by Napoli during the first leg is a perfect example. The situation is further worsened by the lack of support from the wingers – mostly as Messi is not a true winger –, although Griezmann has previously shown the required commitment and work rate – a trait he learned from Simeone’s system.

The footballers need to adapt and fall back to support the defenders against such counters. A simple solution could be using the 3–4–1–2 formation in attack with Busquets, Piqué and Lenglet constituting the back 3. Alba, Arthur, Frenkie de Jong and Sergi or Nélson in the midfield 4, with Messi playing right behind Griezmann and Suárez. In case of a counter attack, Alba could fall back to cut passing lanes in the midfield and defence while tracking forward runs with De Jong and Roberto or Semedo tracking the run of the left winger. Switching players and using both right-backs could make up for the excess running with Barcelona also having good depth in midfield. But the most important factor is the ability of Piqué and Lenglet to charge on opposition players, to not afford them any spaces and to cut any available space and blocking all shots. Another important factor would be Frenkie’s capacity to fall back and mark his man. An interesting idea would be to use Arturo Vidal’s box-to-box style and his physical presence to control and put pressure on the attackers.

Perhaps the solution, instead of finding new individuals, should be to enhance the qualities of the existing players in the squad | Photo by Alex Caparros via Getty Images

While defending, a traditional 4–4–2 could be used to crowd up the midfield and the box, cutting passing lanes and using interceptions and well-timed tackles. But the best solution would be to play a mixture of young legs and dynamic players to win the ball back within 6 seconds: Pep’s ideology. Still, this would require the use of a younger generation of players, something the blaugranas desperately need to start doing.

Barcelona have been poor defensively over the last few years, but change is possible. Unlike Superman, Barcelona’s Kryptonite can be dealt with using pace, good tactics and some good old-fashioned pressing and running. Be it by youth, better transitions, tracking players down or team pressing, Barça’s defence can be improved. Instead of replacing the players at full-back, a team effort can be put in with even the forwards falling back and helping the backline. Both Semedo and Roberto are good options. But with proper tactical support, they can become better. A combination of their abilities and intelligent substitutions could certainly tip the scales in the Catalans’ favour, with Semedo and Sergi useful for different contexts.

If used together properly through wise substitutions, they could provide a deadly combination of skills that the perfect right-back would have, with each filling the shortcomings of the other. If Semedo is offered the width and freedom to dribble, he could possibly become one of the best attacking full-backs in the world. This would allow Roberto to shift into midfield, bolstering Barcelona’s already world-class middle line. Quique has already improved Semedo’s stats drastically, and it isn’t long before he could live up to expectations with Roberto free to excel at his natural position.