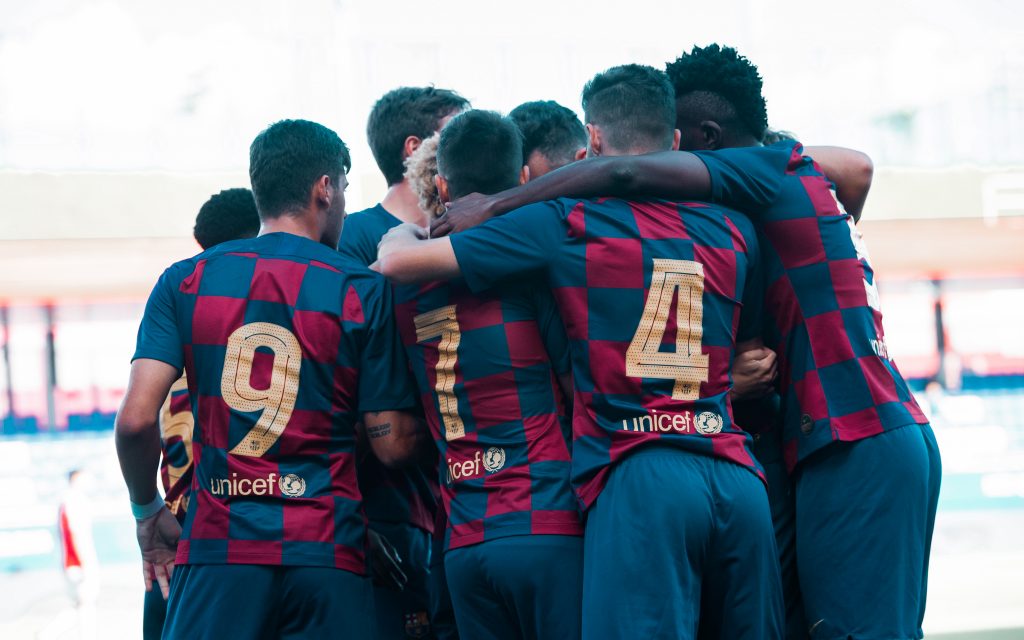 With the coronavirus outbreak, the Juvenil season has come to an early end and the team of Franc Artiga has been named league champion.

On Friday the Royal Spanish Football Federation, the RFEF, announced that all juvenil categories (U19) came to an end due to the current circumstances. Therefore, the leaders of each group were crowned champions. Barcelona’s Juvenil A had a slim two-point advantage over Zaragoza, and three points over Espanyol. From start to finish it had been a very tough battle between the three sides, but in the end it has been the blaugranas who have won the domestic championship.

The season had not started that well for the teenagers, though. The appointment of Víctor Valdés in the summer had brought a lot of hope and enthusiasm among fans, but his special methods, routines, character and particularities made him be very questioned inside the club and La Masía. His attitude was not a great example set for the youngsters, and his tactics differed significantly from those of a more orthodox academy coach. Results, while they should be secondary as the talents development is the priority at such ages, weren’t being ideal either. Particularly in the UEFA Youth League, where the team was struggling to make the top spots.

As a consequence, and following a heated discussion with the academy director Patrick Kluivert, Valdés was sacked in early October. His replacement was one who was much more experienced in terms of handling the gems at La Masía: Franc Artiga. A man with great experience and the Barça DNA in his veins after having arrived to the academy in 2010, Artiga was named Víctor’s substitute as he was promoted from the Juvenil B. Franc got the the well-earned honour and challenge of managing the most important team in the youth system, if we exclude the Barça B.

Artiga wasn’t going to disappoint. While it was too late to implement his tactical changes to avoid the elimination in the Youth League group stage, with time the Juvenil A has been getting better and better. With him, the Catalans have registered 17 wins, two draws and two defeats in the league. At some point the azulgranas even had 11 consecutive victories, which allowed them to take the top spot in the table, a position they have not abandoned since. In total, with 63 points in 25 games including Valdés’ spell, Barça have finished as leaders and champions of the Group 3 of the División de Honor Juvenil.

❛ We would much prefer to have won this on the pitch. Ourselves, Espanyol and Zaragoza were having incredible seasons, but there are more important things than football at the moment ❜

In this way, the Juvenil A achieved its sixth league in 10 years, after Óscar García in the 2010/11, Jordi Vinyals in the 12/13 and 13/14, Gabri in the 16/17, and García Pimienta in the 17/18. From a personal point of view, this is Artiga’s 10th league title at La Masía. Nonetheless, it’s not trophies what matter the most in such groups. Instead, it’s the development of talent and transmission of knowledge what’s most valuable. In this facet Franc has ticked all the boxes too.

❛ I was happy with the way the team developed each week. To win eleven consecutive games in such a difficult group shows just how solvent this team is ❜

“Our goal was to develop players and we have sent several of them up to Barça B, not just to train but also to play games”, Artiga declared. Ilaix Moriba, Konrad de la Fuente, Gerard Fernández Peque, Nils Mortimer, Antonio Jesús and Mika Mármol all got their debuts with the B. Peque scored in his first appearance, and Ilaix and Konrad also found the net. Others like Arnau Tenas, Alejandro Baldé, Álex Rico, Nico González, Jaume Jardí and many more have been growing in leaps and bounds this term too. Despite everyone would have preferred to celebrate the title on the pitch, the work from Franc Artiga and his boys has been commendable.

• Valdés and Barça: When personalities collide