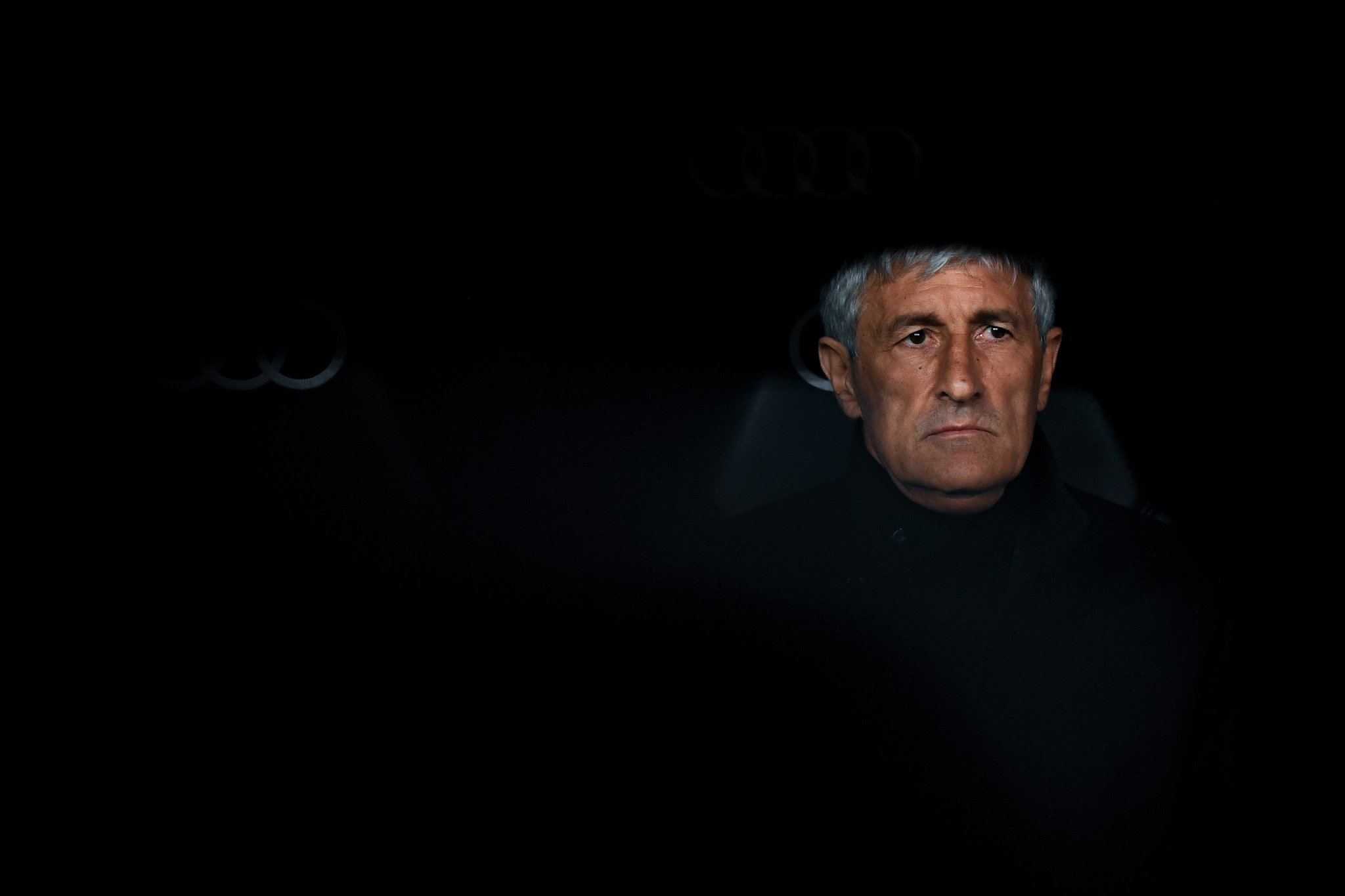 As Barcelona’s two managers for the 2019/20 season, Ernesto Valverde and Quique Setién, failed to revert the downward trend of the team, we make use of multiple statistics to analyse whose team performed better.

Coming on the back of a disastrous season all around, in every single competition played, this article will try to take a somewhat in-depth look at the underlying statistical ebbs and flows that defined 2019/20 for FC Barcelona.

One of the biggest defining features of the season was, perhaps, the mid-season sacking of the incumbent manager Ernesto Valverde and appointment of a new coach in Quique Setién. As such, it makes a lot of sense to discuss the intricacies of the season by putting the stats of the team under each manager side-by-side.

The sub-topics chosen to discuss here have been motivated the recent series of interactive league reviews released by Statsperform – previously Opta. You can find their La Liga review here. First up, shots, goals and xG.

Let’s begin our tour by looking at the shot heat maps and goal location maps under each manager. The data is taken from Understat, and own goals are not considered.

The first important takeaway: Barcelona massively overperformed under Valverde, with a G–xG of around 15, and then spectacularly turned everything around to underperform in the second half, with a G-xG of around -4. On the other hand, Valverde’s Barça conceded more than expected, while Setién’s conceded less than expected.

The shooting and scoring zones remained roughly the same, and perhaps encouragingly, very central and corresponding to very high xG zones. Somewhat worrying is the fact that a lot of shots are conceded from inside the box. Good defensive teams tend to force their opponents to take pot shots from far away, i.e., low xG zones. Barcelona’s defensive endeavours fell flat this season to put it politely, given the number of goals conceded for a top team, and the really dangerous zones the bulk of the shots came from. Both managers were at fault here.

Now, there has been a nagging question in the minds of many: given the xG underperformance, was Setién unlucky? Well, probably, but not by as much as you might think. There are ways to quantify ‘luck’ – one of the ideas is Expected Points (Understat provides the data again). The idea behind expected points is: given the xG of the individual shots, you can simulate match outcomes many many times, and infer the probability of winning, losing or drawing based on those simulated outcomes. fcpython.com provides a nice and gentle intro to this idea if you want to go ahead and do the calculations. For now, let’s just take the Understat numbers directly.

Under Valverde, Barcelona had 40 pts, and so did Real Madrid. Barça were ahead on a head-to-head basis by virtue of the tie at the Camp Nou. Under Quique Setién, the reality is, well, Barcelona lost, but do the xPts tell a different story? Sadly enough, not really. Filtering out by date to get the xPts for the last 19 matches, and it’s 38.53 to 38.33 in Madrid’s favour.

So, even if Setién had gotten lucky with the finishing, it would have barely taken Barcelona tied for the top position. Now, Quique Setién’s team performed better in terms of expected points as compared to Valverde’s, but not enough to have won the league directly.

Moving on to the next topic: defensive activities and pressure. Let’s first take a look at pressure percentages by thirds of the pitch, in all games, under both managers.

It’s pretty evident that Ernesto Valverde’s Barcelona focused their pressing in the middle third rather than higher up in the pitch – makes sense since Lionel Messi and Luis Suárez didn’t press a lot.

The story remained the same under Setién. However, one thing that does need to be pointed out here – compared to the rest of La Liga sans Getafe – is that Barça were kings of pressing. Barcelona had the second-best PPDA according to Statsperform. That’s still nowhere near enough the other European elites, but still, not too shabby. Let’s compare the pressing under the two managers now.

The raw pressure numbers were higher under Valverde, but Barça had more success under Setién, with a jump in successful pressing percentage from about 29 to 33. Now, before proceeding, I do want to make the point that across all leagues, a general trend that can be noticed is: the higher the possession percentage a team commands, comparatively fewer are the pressure numbers. Of course, there are fluctuations, especially on a game-by-game basis. But on average, if a team keeps the ball better, they need to press less.

So, one way to make a truer comparison of the pressure numbers is to possession-adjust them, as Statsbomb suggests. Possession-adjustment brings the numbers much closer – roughly around 200 for both:

What this reflects: since Barça had more possession under Setién, they didn’t have to press as much. In my opinion, possession-adjustment makes a comparison of off-the-ball activities a bit fairer. Now, to add to this, successful pressure is good, but not the only way to stop the opponent. Their passing rhythm can be disrupted without necessarily winning the ball back. Here is how the opponents’ passing accuracies looked like: Setién’s Barca disrupted the opposition marginally better.

To get an idea about the intensity of pressing, we can take a look at PPDA. It is a proxy for how frequently Barca disrupted opposition’s passes. Here is the definition from Wyscout:

The PPDA metric is calculated by dividing the number of passes allowed by the defending team by the total number of defensive actions. Defensive Actions are: possession-winning duels, tackles, interceptions, fouls.

On this occasion, the numbers are taken from Understat. Smaller the number, the better is the pressing / defending intensity, as it signifies the opposition being able to make fewer passes before Barça applies a defensive action.

Once again, pretty comparable numbers here under both coaches. We can also take a look at the time-variation of pressures applied by Barcelona. This data comes from Statsbomb‘ open data set on Lionel Messi. Messi played in a total of 33 league games this season, so this is only a partial set of the full data that is publicly available. Of these 33 matches, 14 were under Valverde while 19 were under Setién. So, to keep comparisons fair, the numbers are converted to per game.

Overall, the intensities seemed to drop as the game wore on, which is natural, but for Barcelona, it was exacerbated by the aging squad and the very disturbing reluctance in taking advantage of substitutions, especially by Setién.

It is fair to say that Barcelona pressed better under Quique Setién. What about the end product of pressing though? How often did turnovers created from pressing translate into something actually constructive?

Presented here are starting locations of “high-turnover sequences” forced by Barcelona under each manager. Once again, there were 14 games under Valverde in the public dataset as compared to 19 under Quique Setién. The takeaway is that the ratio of shots to the total number of such sequences was better under Setién.

First up, a touch zone comparison:

Now, there are some interesting trends here. Despite having more possession and touches, Barcelona didn’t do much in the opposition penalty area under Setién. And while the touches in the final 3rd per 90 increases, as a percentage of total touches it goes down marginally. This has been routinely criticised by several fans: holding on to possession aimlessly. Meandering on and on through the middle 3rd was a massive problem for Barcelona.

Looking at the passes, completed passes per 90 and completion percentage both see an uptick, but the passes to the final 3rd, the penalty area and progressive passes in general only see a minor improvement under Setién.

Quirks of possession sequences and build-up

The final section of this article will have a look at the possession sequences and their characteristics under each coach.

We do see a decrease in directness under Setién. But this is not a criticism. At least not based on these numbers. There is no one way to play football. And there is certainly nothing wrong with being too direct, or otherwise. Next, we take a look at the patterns behind successful and unsuccessful goal kicks from Marc-André ter Stegen.

It is very clear that Barcelona enjoyed most success when using short goal kicks. Long goal kicks to escape pressure failed with spectacular regularity and has umpteen reasons. Luis Suárez, at 34, can no longer provide the same hold-up play as before. Messi cannot be possibly expected to win aerial duels against defenders to try to bring a long ball down.

Short goal kicks during buildup are most often successful, but not without their own issues. With short goal kicks, Barcelona are expected to play out of the press from the back. And this worked fine against most La Liga teams, but got brutally exposed in the Champions League and against better La Liga teams who had organised and structured high press.

The problems were two-fold, in my opinion: a general lack of mobility by the midfield in the build-up phase, and lack of runners out wide who could serve as a target to hit long balls to. Moving forward this season, this is something new coach Ronald Koeman needs to address as soon as possible.

At last, we will look at some typical passes used in build-up. To do this, a clustering analysis was done on all successful passes that originate in different thirds of the pitch. The clustering analysis groups together passes based on their similarity – passes originating and ending roughly from the same zone of the pitch will get clustered together. What is shown below is an average representative of such pass clusters. In fact, five of them for each zone – these are the five most frequently played pass types in each zone.

Something interesting that probably bothers me a bit is the lack of passes coming into the danger zones from wide. The passes in the final third are mostly from the half-spaces to out wide or entering the box, but nothing from out wide enter the box frequently enough.

Anyway, after this really long and arduous journey – if you made it till this far –, I will just simply end with this: Quique Setién did marginally improve Barcelona in certain ways. Fitness-wise, it certainly seemed so. Pressing was much better. However, Barça still didn’t take enough advantage of opposition slip-ups and didn’t create enough progressive actions. And the results sadly enough didn’t justify sticking with Setién.

This is by no means a complete comparison of the two managers. There are probably a million more things one can talk about. If you want to see something else, let it know in the comments below.

Acknowledgements: David Bravo, editor-in-chief of Barça Universal, and Shantanu Das, a friend from pre-historic ages and a fellow football fan