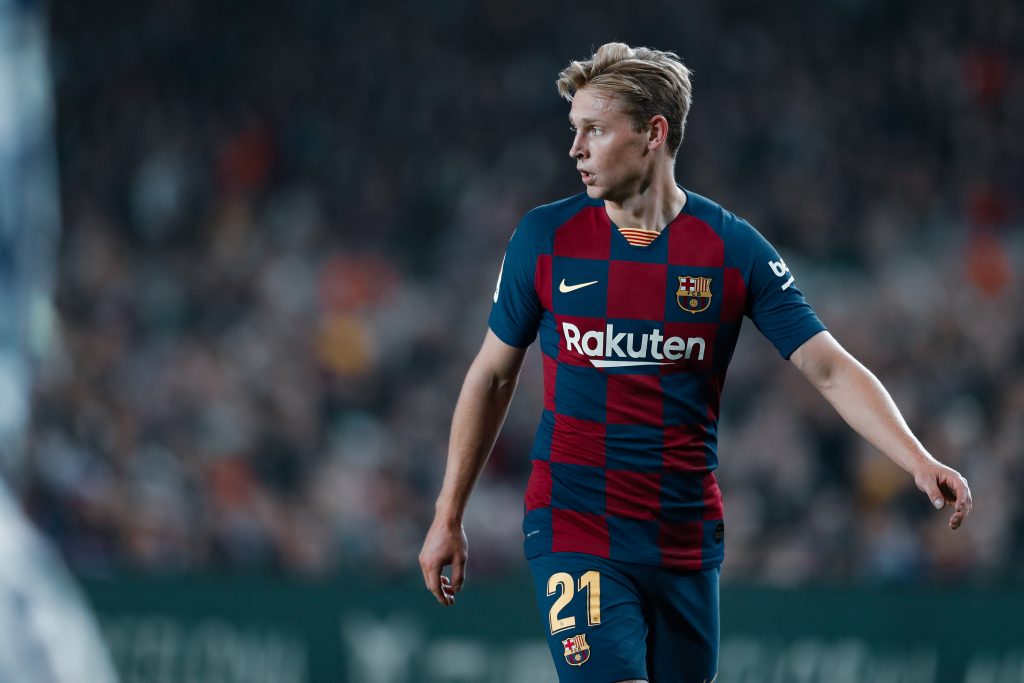 With a soleus injury, Frenkie de Jong is expected to miss at least four games, meaning that coach Quique Setién will have to find other names to cover his absence.

In his first season at Barcelona, and in spite of the adaptation process in his move from Ajax, 23-year-old midfielder Frenkie de Jong had had an immaculate injury record so far. Nevertheless, after no injuries through the entire campaign, such positive streak seemed to come to an end after he felt some discomfort last Saturday against Mallorca. While he was subbed out and also rested against Leganés on Tuesday, it looked like nothing more than some normal and temporary discomfort after three months of inactivity.

However, before travelling to Seville for Friday night’s match, Barcelona confirmed the absence of De Jong with a calf strain. This morning, after further tests, the club has confirmed an injury. The official statement read: “The clinical follow-up on Frenkie de Jong has uncovered an injury in the soleus of his right leg. The evolution of the injury will condition the player’s availability”.

Certainly very bad news for coach Quique Setién and Barça, who come from dropping two vital points in a goalless draw against Sevilla. As Real Madrid now have the advantage in the league, as long as they win tonight’s game against Real Sociedad, problems continue to accumulate for the blaugranas. De Jong had featured in 38 games this term in all competitions, and his absence will be a significant blow for Barça. How long he will be out for is still unknown, but it doesn’t look good.

According to Spanish newspaper AS, he could be out for at least two weeks, which includes crucial fixtures such as those against Athletic Club, Celta de Vigo, Atlético de Madrid and Villarreal. This means that Setién will need to find some alternatives to him. But what are the best options to replace him now, in a crucial stage of the season?

Arthur Melo’s season, or seasons since he arrived to Barcelona in 2018, have been marked by inconsistency. A certain lack of continuity on the pitch, being usually unable to complete all 90 minutes, as well as off-pitch fitness and non-sporting issues that have shaped his career at the Camp Nou so far. His possession and ball-retention skills, which made everyone fall in love with him since day one, are unquestionable. But the absence of some discipline on and off the field have prevented him from being a regular fixture on the side.

On his day, Arthur should undoubtedly be a starter at Barcelona. With the perfect tools to handle possession, he is perfectly suited to Barça’s football. That said, he is missing some tactical concepts which have made Ernesto Valverde and Quique Setién rely at times on other figures. His football does not always carry intentionality and accurate positioning, which is what his managers have been trying to fix. If he establishes himself as a starter and grows from there, though, Arthur is one of the most appropriate midfielders the Barcelona squad has at present.

Arturo Vidal is the opposite to Arthur Melo in many ways. Not only in terms of age and experience, but in style and context. If the Brazilian can add beauty but not always substance, the Chilean compensates his unconventional profile with pure productivity and impact in the final third. While by no means being the most orthodox Barça midfielder, his dynamism, plus his seven goals in La Liga, are greatly appreciated in a team that can sometimes be excessively passive and horizontal.

His forward runs and surprise appearances in the opposing box, added to his energy to press, are useful considering that the Catalans need more goalscorers other than Lionel Messi, and that there’s no natural winger in the right flank. But choosing him is not free of downsides either. For instance, when he has to help in building up from the back or is pressed in his own half, his weaknesses get exposed. Vidal, mostly, can be very productive for certain situations and scenarios.

To talk about Iván Rakitić, we first need to specify which version of Rakitić are we discussing. At the start of the season, the lack of minutes resulted in him performing far below his prime level. Nevertheless, after the coronavirus break, his form has significantly improved and he could be a valuable piece for Setién if he maintains it. Playing in the last three games, and starting in the last two, the Croatian also delivered a praiseworthy performance against his former club Sevilla.

After a tough start to the season, Iván Rakitić seems to have benefitted from the break to get a place in the team | Photo by Photo Agency via Imago

His positional flexibility to drop deep or to operate higher up the pitch, and his understanding of Messi’s nature to adjust his position according to the Argentinian’s, have made of the number 4 a vital player in Barcelona’s structure for many years. With the level both have exhibited in the past week, it is safe to say that he contributes to more to the team than Arthur Melo right now. Even so, his lack of awareness or even creativity are arguments that run against him. At his best, there’s no doubt that Rakitić can be very important. But can we see that version of himself more often?

The name all culés want to hear. La Masía starlet Riqui Puig has been knocking on the door of the first team for the past two years. His intelligence, his mental and physical agility, his technique in tight spaces, his inventiveness and intuition, his energy on and off the ball, his passing expertise, his ability to take well-measured risks…Riqui fits perfectly into the mould of the prototype Barça midfielder.

“Riqui Puig played a great game. He is a kid who is training very well and has a very good attitude”

The overbooking in the central of the pitch in the senior side, though, has prevented him from having regular minutes. In the past two campaigns, he has roughly had over 300 minutes for Barça in the league and Copa del Rey. His apparently weak physique is often used as an argument against him too, but the dynamism and vitality in his play, and the intensity and smartness with which he presses, convert a disadvantage into an advantage for Riqui. Now, hopefully, he earns regular minutes and makes the most out of them to gain Quique Setién’s full trust.

Riqui Puig is not the only bright Barça B midfielder that is ready for the first team. Even if away from the spotlight that Riqui receives, Álex Collado and Monchu Rodríguez are two more 1999-born names to take into high consideration too. Collado is a natural interior or central midfielder, though at the B he has usually been deployed as a winger, generally on the right. He performs extremely well in any of these positions, thanks to his delightful technique, stealthy moves and imagination. A very gifted left-footed wizard, he is undoubtedly prepared for the senior side.

Meanwhile, Monchu is a very different youngster characterised more by his dynamism and all-round skillset. While he can perfectly perform as a defensive midfielder, he has mostly been used as a central midfielder this season. He has an outrageous passing technique in his short and long distribution, competes at an incredibly high level of intensity and concentration, has a lot of talent to operate in tight spaces, provides goals and threat in the final third, and has much mobility yet a smart positional sense. With a maturity way beyond his years, he can certainly be very helpful at Barcelona.

While the list of midfielders is not endless, there mostly are two other alternatives to fill in the absence of Frenkie de Jong. The first one implies converting some footballers into midfielders, or using them in such positions. Sergi Roberto, a natural midfielder utilised as a right-back, is a strong candidate to occupy any spot in midfield too. Still, Sergi is also injured with a rib fracture, and he is expected to miss the next clash against Athletic Club.

Lionel Messi, for example, could be deployed deeper too, but considering that he needs to be closer to goal, it would be more sensible to change a formation if four attackers were used. A 4–2–3–1, for instance, or a back three or back five system. With that being said, there are enough reliable natural midfielders in the squad, so they should be prioritised first.