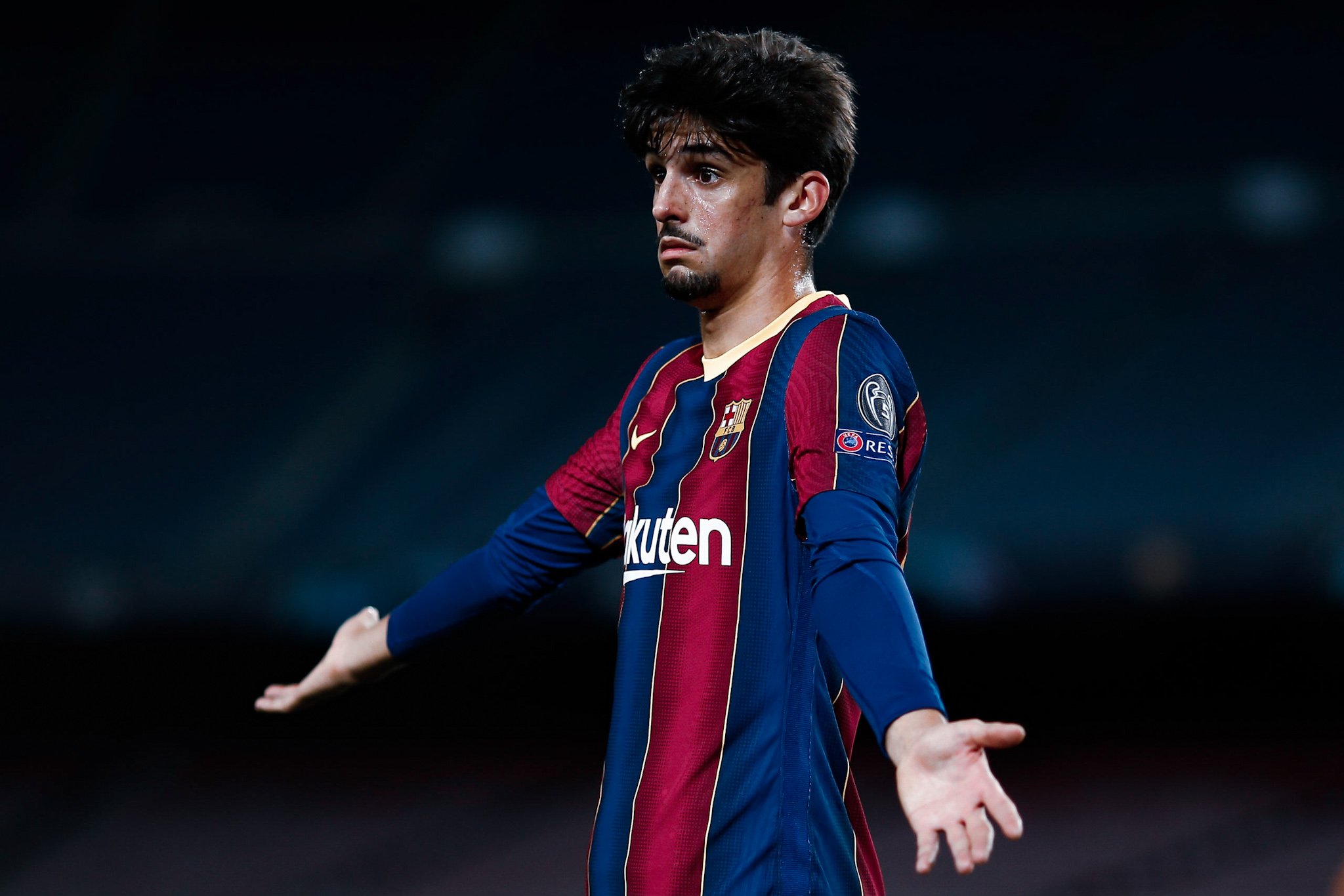 Fransisco Trincão has the ability to become a world-beater one day, but Barcelona, and the fans must be patient with the 20-year-old, who is only in his second season of senior football.

In their fifth Champions League clash in 2020/21, Barcelona marched towards their fifth victory in a row. Needless to say, despite fielding a rotated squad, Ronald Koeman’s troops delivered an incredible performance, brushing off their opponents with ease.

The scoreline at the board stood at 3-0 for the Catalans, but it could’ve been so much more. And while most had a night to remember, probably the opposite is true for the young Portuguese starlet, Francisco Trincão.

Barcelona’s 20-year-old newcomer found himself in numerous favourable opportunities during the night, once even facing an almost empty net, but failed to take his chances time and time again. It goes without saying that frustration was building over the course of the 90 minutes, both with the player himself and the raging fanbase that was quick to jump on his throat.

There is no denying he had to do better than that – yes, he is only 20 but much more is expected from a talent dubbed to be the Catalans’ big star in the future. At the same time, however, Barcelona fans looked a bit too eager to criticise him in the first place. Let’s rewind the story for a bit.

This is a youngster who’s still in his first season at Barcelona and has tallied a grand total of 48 games for his former club’s senior squad before making a huge switch to the La Liga giants. That equates to around one full season and eight games in senior football after stints exclusively in the academy. (Transfermarkt)

When everything is said and done, we are still talking about a highly inexperienced player that’s been given an opportunity of a lifetime but is also way out of his depth. For now, at least. In the future, he can become what many hope he will – a star.

The world was against Trincão yesterday as Barcelona took on Ferencvaros. (Photo by ATTILA KISBENEDEK / AFP)

For all his talent, quality and extraordinary potential, he’s still a 20-year-old kid who’s not exactly playing regular football so we can’t expect him to shine every night when he’s on the pitch. On top of that, there’s one more crucial aspect we might be forgetting here. A switch from Braga to Barcelona, with no disrespect to the Portuguese club, is massive and the Azulgrana’s system can be complicated to get used for an outsider, no matter his quality.

After all, look at stars like Frenkie de Jong, Philippe Coutinho or even Antoine Griezmann — world-class players and yet, they’re still struggling to cope with the demands of the Catalan giants. Can we really expect a 20-year-old who’s now playing in his second senior season to do much better than that?

Barcelona are a team that preaches faith in the youth and promises to be a club that cultivates young talent, not stifles them. The same goes for their fanbase. It is incredibly possible that Trincão is more likely to be on social media and read all of the comments people leave out there and is still far more impressionable than most older, experienced players.

And for a youngster to be bombarded with criticism after a game that was won 3-0 and was also largely insignificant in the grand scheme of things can be shattering.

For Ronald Koeman, however, it would be wise to present Trincao with as many opportunities as possible in the Barcelona XI,if he is to develop properly. Of course, first, he has to warrant them, both in training and on the pitch, but he’s eager to succeed and needs more minutes in order to do so.

We’ve seen that he kept going and trying until the last minutes against Ferencváros. Even though the ball just would not go into the net, the Portuguese talent was still adamant on creating something, staying proactive and never letting the failure get into his head. At least not visibly.

And this is something worth building on. Make no mistake about it, Trincão is a player for the future and will only grow with time, and Barcelona will be here to reap the rewards if they are patient.