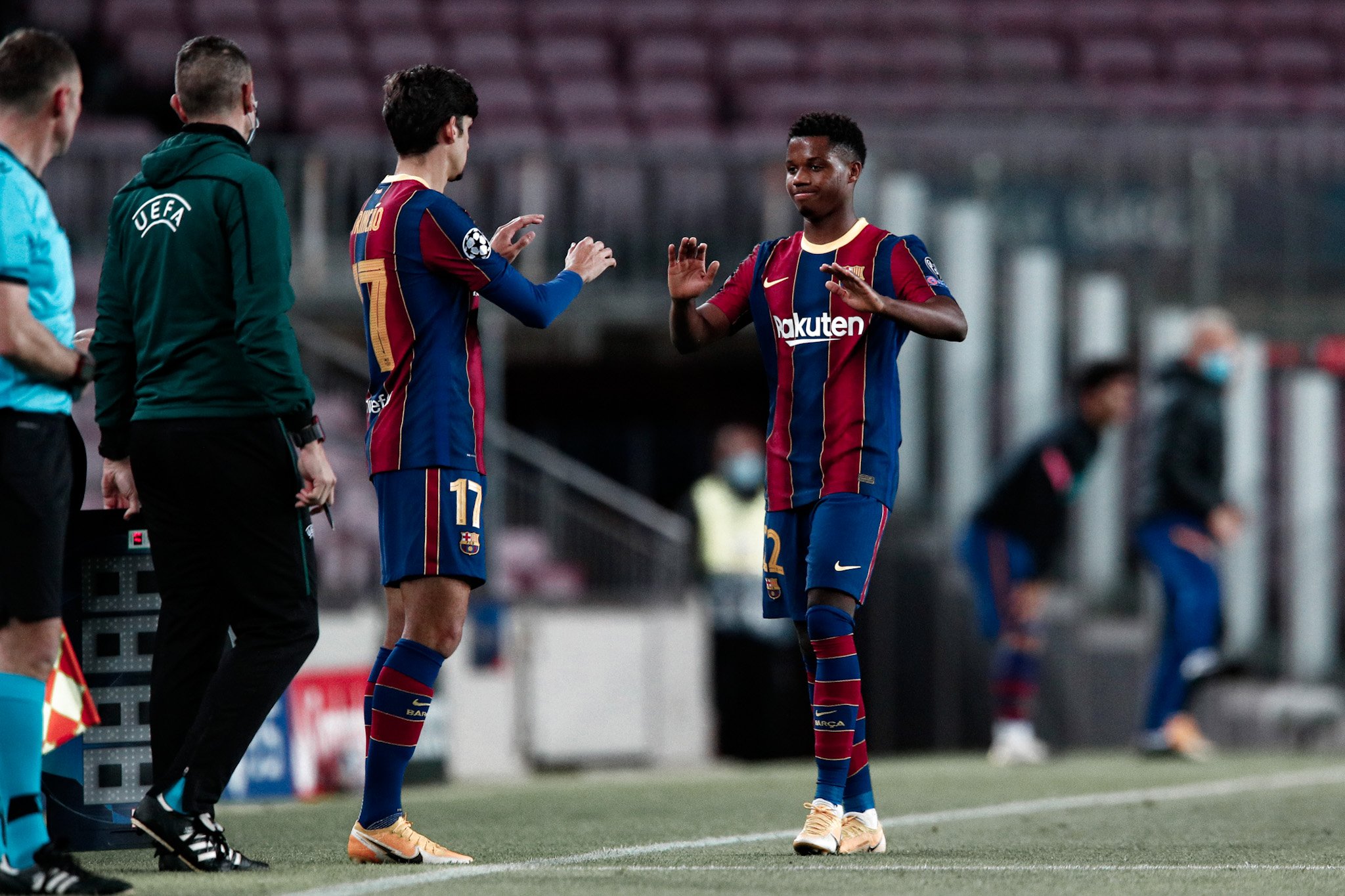 Barcelona have always produced the best youngsters in the world. Whether they buy them or nurture them since their seventh birthday, the Catalans have seen many youngsters climb through their ranks.

From Carles Puyol to Lionel Messi, passing by Marc-André Ter Stegen or Samuel Eto’o, Barça have developed some world-beaters in recent years. Recently, while Josep Maria Bartomeu’s board strayed away from La Masia, they still bought some promising young players.

Frenkie de Jong, Ousmane Dembélé, and Sergiño Dest have all joined the Catalans after impressive spells at their former clubs. While the midfielder and the full-back came through at Ajax, Dembélé impressed in France and Germany and is now enjoying a bit of a renaissance at Camp Nou. However, on top of all of these promising youngsters, there are four that stand out the most.

This list consists of the four players who will have the squad built around them in at least five years. In contrast, Dest, Frenkie de Jong, and Dembélé already are established members of the team and are essential for the present of the club.

We start with the most unknown of the four. When Gerard Piqué suffered a horrific injury against Atlético, Culés panicked. They did not want to see their best midfielder, De Jong in the defence while Sergio Busquets and Miralem Pjanic composed the double pivot.

Instead, Ronald Koeman went in with a bold decision: He left De Jong at home for the Champions League game in Kyiv.

Oscar Mingueza, an unknown, was on the verge of making his first start as a Barça player. The 21-year-old, who has played for every La Masia team, finally got his chance and made his family proud. His sister, Ariadna, a midfielder for Barça Femeni showed her excitement on Twitter.

Despite the low expectations, Mingueza impressed. He did not look like a rookie, and many fans could see him becoming a Blaugrana captain shortly. He showed most of what La Masia taught him: Confidence with his feet, remarkably developed defensive awareness, and, most importantly, a resounding voice. The Spaniard was the best option to replace the leader that is Piqué.

Since then, the La Masia player kept his place in his team. Alongside Clément Lenglet, Mingueza looked like the team’s stalwart against Osasuna and Ferencvaros.

Granted, those three were not the most formidable opposition. However, what the central defender has shown until now is exceptionally favourable and will surely start against Cadiz on the weekend. He already received some praise from Joan Laporta, who is in the run to become the club’s president. After three clean sheets in three fixtures, there is no doubt that Mingueza deserves the start.

If the youngster keeps playing this well, it will be hard for Koeman to drop him out of the eleven. He is a defender that oozes class. Koeman is being heavily critical of his defender, but the man-management from the 57-year-old will only help his development.

If Barça needs a backup shortly, they do not have to look far away.

To partner Mingueza in defence, 21-year-old Ronald Araujo will do the trick. The Uruguayan’s breakthrough campaign came last season, under Quique Setién.

Being a powerful defender, Araujo was the original Mingueza last year. Still contracted with the B team, the Uruguayan international even went to the playoffs with the youngsters. While he watched from the stands, because of an injury, his team lost the playoffs. Along with Riqui Puig, Araujo got a promotion at Camp Nou.

When Lenglet was sent off against Celta Vigo at Balaidos, the centre-back came on and had a serene game at the back. Moreover, when Piqué received a red card against Ferencvaros, many Culés stressed over the Spaniard’s replacement. Araujo stepped up, tamed Juventus but went off injured at half time.

Now, as the youngster is close to recovery, the fans are excited. The battle between Mingueza and Araujo to see who will get Piqué’s spot will be an interesting one. However, before debating on who is the best, Culés will be happy to have both of them. The defenders have shown so much promise and are in a privileged position at Camp Nou.

In a few years, seeing the two former La Masia defenders together will not be a bizarre sight, especially if Araujo keeps performing on a high level.

Last year, when he got the nod, the right-footed centre-back made the fans forget about a Samuel Umtiti in perdition. The then La Masia defender became third in the pecking order for Setién and kept his status under Koeman. Much like Mingueza, Araujo will be a backup in the near future but transform into an undisputable starter.

Barcelona have to build their defence over this quick, intelligent, and composed central defender. They have to implement him in the first team at all costs. If he continues like this, there will be no reason for him to get a contract extension and become the future number one at his position.

After looking at the current defensive backups, a midfield wonderkid makes the list as well. At only 18, Pedri has had a groundbreaking start at Camp Nou.

The teenager has already played 16 times for the club. Moreover, for five million euros, Pedri looks like the biggest bargain of the summer transfer window. Granted, the youngster has only scored twice in Blaugrana colours, but he is one of his manager’s favourites.

Pedri looks like he will transform into a technical leader at Camp Nou. However, he might also grow into a vocal one. He was the only man to go speak to the press after his team’s horrid performance against Atletico. Also, he already proved his talent by obliterating Juventus a month ago.

The 18-year-old gave Andrea Pirlo’s side a big headache. Unstoppable on the left, he kept breezing through the Italians and frustrated them. Pedri, at only 18, looks like the most natural Barça signing of the recent years. His potential speaks for itself but his current ability is already extremely high. Already a regular at Camp Nou, Pedri will become the side’s most vital player in a decade.

Deployed as an attacking midfielder, a left-winger or as part of the double pivot, the young star has shown his versatility. He also showed a lot of inventiveness in his copious gametime.

As he has not even reached his twenties, Pedri will undoubtedly develop into one of the world’s best players. After coming as a prodigy in 2020, he is likely to become one of the team’s leaders in 2030.

Another teenager to round off the list. Ansu Fati is the most talented youngster to come out of La Masia in the past ten years. More than a gem, the 18-year-old is a record-breaker and considered as a strong candidate to win the Ballon d’Or in the future.

Before his eighteenth birthday a month ago, Fati wrecked many teams and broke many records. He got his first Spain call-up at 17 and scored his first international goal a few days later. He even won the La Liga player of the month before his injury and led the charts in terms of goals and assists in the league and the club.

Being arguably the best youngster at Barcelona, Fati climbed through the ranks and became the main man up front. When Lionel Messi was misfiring, the teenager chipped in with two goals against Villarreal and a wonderful striker away at Balaidos.

The forward can play on the left and as a number 9. In fact, Koeman already said that he sees him as a striker and deployed him there in El Clasico. The striker on the day got an equaliser for Barça and became the fixture’s youngest goalscorer. Alas, his injury might look bad but he took the right path by having surgery. Hopefully, he comes back with the same fight in him.

It feels like Fati already achieved his status. After being the only positive in a dark 19/20 season, Fati will lead the Catalans in a decade.

If Barça want a competitive side after Leo Messi leaves, they need to give Fati the weapons around him. With the three first players on that list, the Catalans already have an insane spine. All they need now is their youngsters to continue on the right path to becoming world-beaters.

These are the three players who are promising but struggling at the moment. Carles Aleñá has made the brightest start to the season by impressing Koeman and forcing his way into the Dutchman’s plans. Puig has received an atrocious treatment from his head coach but has seen the pitch recently. Finally, Francisco Trincão has had a rough start at Camp Nou but needs time to adapt.

These three youngsters could definitely become forces at Barcelona. They have the talent, and the class to succeed and, hopefully, forget their rough starts. In truth, the former two endured some tough treatments since coming through the ranks at Barça.

If the Catalans count on all their youngsters, they could assemble a superb squad, which could challenge in half a decade. That will only happen if they nurture their wonderkids in the best way possible.