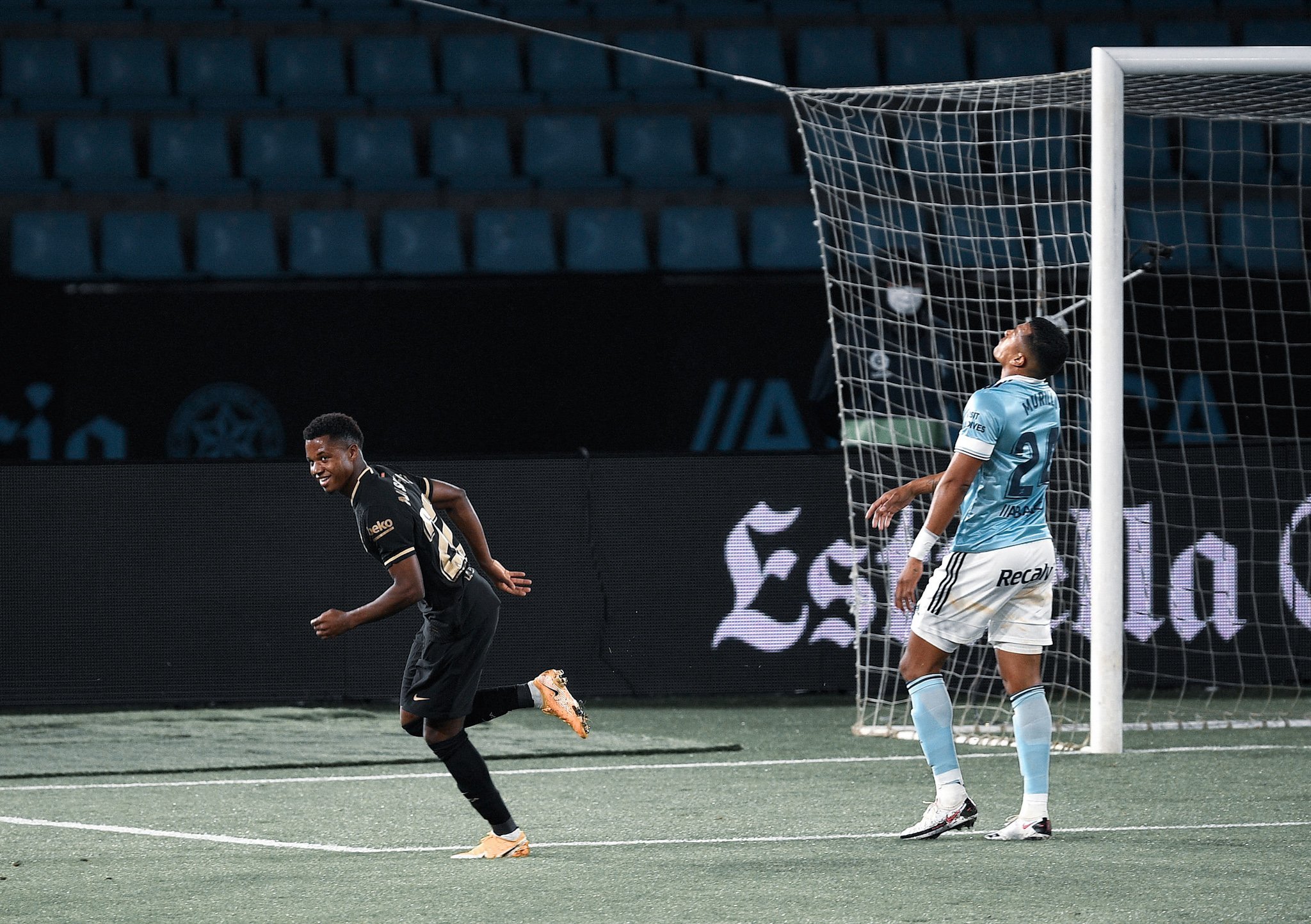 Ansu Fati is a lively player, one of the most entertaining in world football right now. At 17, he has already fulfilled a plethora of dreams. The Spanish international’s early career has consisted of scoring for Barcelona, becoming one of the main stars for Barça and Spain and winning the La Liga Player of the Month for his red-hot start to the season.

While cementing a starting spot for himself is excellent, but Fati cannot start every game – certainly not at 17. Having started the season in September with Spain, he has already clocked in considerable minutes for club and country. For his country, he has played four games, completing 250 minutes since his debut against Germany and for Barça, he started the first three games of the Blaugranas’ campaign but has not made it past the 70th minute in any of the three games.

At 17, Fati has been given way too much responsibility. (Photo by Denis Doyle/Getty Images)

Ronald Koeman seems quite fond of the player, prioritising his development and making him one of the essential pieces of the jigsaw, but he has to keep tweaking his team to avoid fatigue. The Dutch manager started the same eleven men thrice in three games, and all that in the span of a week! Against Sevilla, the players were dropping like flies because of the two games they had played against Celta Vigo and Villarreal earlier in the week. The international break has not come at the right time either, starting from Leo Messi, who’s had to play in one of the highest stadiums in the world, to Fati, who, at 17, deserves to be integrated slower.

The game against Getafe on Saturday will be a tough one, although not as crucial as El Clásico in a week or the encounter against Juve on the 28th. Barcelona have always struggled At the Coliseum Alfonso Perez, and José Bordalás’ side is one of the most violent ones in the league, giving their all on the pitch to get the ball. With the games against Madrid and Juve in mind, Koeman has to rotate his eleven, starting from Ansu Fati, who has played a lot already, could get a rest. There are four candidates, in no particular order, who could replace him for the game, and Barça Universal reviews every option.

The obvious answer to the problem is named Ousmane Dembélé. The Frenchman is the designated number two to Fati’s throne. If he still ends up on the bench, there will be several questions raised on Ronald Koeman’s decisions.

Ousmane Dembele is yet to start a game under Koeman. (Photo by David Ramos/Getty Images)

A pacey winger, Dembélé can do a job when called upon and can break many ankles when going up against the opposition’s right-back, as Dani Carvajal can testify. Against Getafe’s excellent Damian Suarez, Barcelona need a mischievous winger on the pitch who could make the Uruguayan lose his senses. Also, playing Dembélé, a lively forward, in place of Ansu Fati wouldn’t change Koeman’s plans too much as he’ll need to open up Getafe’s well-oiled defence who are quite allergic to wingers trying to dribble them.

However, Koeman might be reluctant to start Dembélé at that stadium because of the 23-year-old’s history – the place he got his first injury for Barça. Bordalás’ defenders aren’t scared to display their physical prowess, and an injury to Dembele could end up hurting the team in the long run.

In conclusion, while Dembélé looks like a sensible inclusion in the former Barça legend’s tactics, it might not be best to sacrifice him against the relentless kicks by the Getafe backline, right from the start, at least.

Francisco Trincão has started the season well, and his recent form with Portugal and Barça could propel him towards a starting spot in Ronald Koeman’s plans. Much like Dembélé, Trincão is a pacey winger who can dribble like there’s no tomorrow and he wouldn’t be half bad against Getafe, a team that likes to defend.

If Trincão replaces Ansu well, and Antoine Griezmann has another lacklustre performance, a debate over the starting right-winger for El Clásico would start. That competitive aspect of the game could help Griezmann get his motivation back or could give Trincão a lot of confidence before a tough month.

Passing of the baton? (Photo by Alex Caparros/Getty Images)

Originally a right-winger, the former Braga star is left-footed and could be of use on the left, replacing a tired Ansu Fati, and perhaps cementing his place as a Barça starter. Starting him on the left could work, especially when Koeman has to consider his options.

Martin Braithwaite, although not the most flashy option, is a player who Koeman has to consider since he’s giving his all in training to show his worth. A hard-working forward, Braithwaite is the definition of a panic buy. Still, he has to get his chance at some point, especially as he got Luis Suarez’s #9 after the Uruguayan exited Camp Nou this summer.

The Danish international comes back from the national team with an assist against the Faroe Islands and 87 minutes played in Iceland, where Denmark won 3-0. Braithwaite started both of these games on the left-wing, complimenting his team’s attacking trio to perfection.

Braithwaite put in an excellent shift for his country in the break. (Photo by HARALDUR GUDJONSSON/AFP via Getty Images)

It is safe to say Braithwaite has adapted to the wing now, and he can add a lot of positive aspects to Barça’s game when he’s on the left, as he showed against Real Sociedad in March. The Danish forward was imposing in that game and received a lot of praise off the back of his performances against Eibar and Sociedad from Culés.

Against Getafe, Martin could be a surprise addition to the squad, and the 4-2-3-1 could suit him like a globe. With his decent pace, he can be a poisonous player for a defensive side like Bordalás’, and he can create acres of space for Messi and Coutinho to run into, but he shouldn’t be Koeman’s number one solution to replace Ansu Fati.

Another surprise, but another exciting addition to Korman’s eleven if he chooses that option, Konrad de la Fuente was one of the youngsters Koeman liked the most in the pre-season friendly. So much so, he even included the American in his Champions League squad along with four other Barça B players.

Touted as a possible left-back option, Konrad can be a swiss knife as he can play in many positions, though, his most natural role on the pitch comes as a left-winger. An energetic wide player, Konrad could tire out Damian Suarez who isn’t the quickest. He could also be a good surprise as he’s not a regular starter for Barça, so that could mean Getafe won’t know how to defend against a relatively unknown opponent.

If Koeman wants to spice things up, he could go for the teenager, and it would seem like an absolutely ingenious move. Going for an unknown player on the left could pay dividends for a side that’s still searching for their best form.