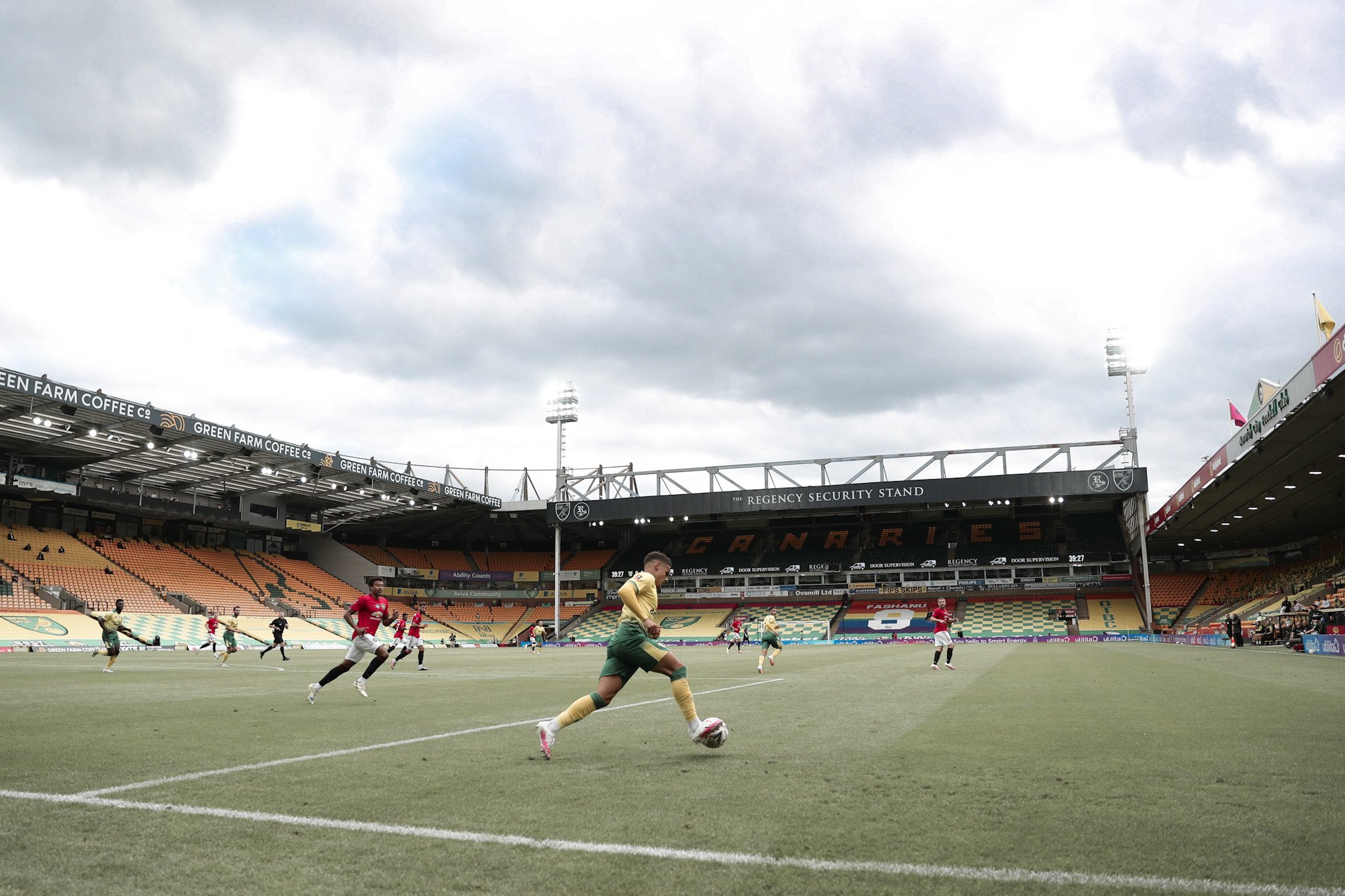 The last few years have been quite disappointing from Barcelona for not only the fans, but also the board. In sporting scenarios as well as commercial, Barcelona are not where they want to be. As a club, FC Barcelona needs a lot of changes if not a huge rebuild. One of the positions which must be strengthened is the right-back role. Wih Nelson Semedo’s move to Wolves all but confirmed, a new right-back is more of a necessity than ever. In this article, we’ll go through and review the four main potential replacements for the Portuguese at right-back.

Though Sergi Roberto has played at right-back often, it’s not his natural position and that is apparent against tougher opponents. As much as watching a La Masia graduate like Sergi make it big is special, a better right-back is a necessity. The four main candidates that we will go over are Hector Bellerin, Sergino Dest, Max Aarons and Emerson Royal.

Bellerin is someone who once was a very promising youngster. His performances at La Masia caught Arsenal’s eyes and he moved to Arsenal in the summer of 2011. Since then, he has gone on to play 207 matches for the Gunners’ first team in all competitions. Tactically, Bellerin is a smart player. Something that is admirable about the 25-year-old is that he knows when and when to not commit himself to the tackle. This is somewhere he edges out Roberto. The latter is patient when defending but his judgment against dribblers is often lacking.

Photo by Will Oliver – Pool/Getty Images

Bellerin’s most characteristic trait is his pace. He is aware of this fact and uses it in tandem with spatial exploitation well. If he has a lot of space in front of him, which is often the case in Barcelona with Messi drifting inwards, Bellerin is a great asset to progress the ball. However, he does need space. Unlike Semedo, the Spaniard doesn’t operate as well in tight spaces. In terms of crossing Bellerin is quite average. His deliveries are often redundant which is the main drawback. However, the ex-La Masia player has good awareness and often pulls the ball back accurately.

Arsenal have reportedly agreed to sell Bellerin if an offer for £18m arrives. In Ainsley Maitland-Niles, Arsenal have a wing-back who could take over the right-back spot soon. For Barcelona, Bellerin would add a different profile in the dressing room, and with his outgoing nature and Spanish connection, fitting in would not be a problem as it often can be for English players at Barcelona. Though he isn’t the best positionally in the final-third and he does have a history with injuries, Bellerin could be a good signing for Barcelona. However, this does not necessarily mean that he would be the best signing from these four. This leads us to our next candidate.

Dest is someone that a huge number of Barcelona fans have always been drawn to. The void left by Dani Alves has not even come close to being filled. In Dest, Culés see a full-back of a similar mould.

Sergino Dest has the profile of an ideal Barcelona right-back. Positionally smart, pacey with good dribbling, and naturally good in attack, the Netherlands born right-back is a United States international who joined Ajax in 2019. At Ajax, Dest has been a reliable and impressive player. Playing 37 matches and 2,709 minutes, he has scored twice and assisted six goals.

Dest is an excellent dribbler. His pace combined with his quick feet means that he can play as a wing-back as well as a more defensive-minded full-back. He uses quick bursts as well as good combinational play to get past the opposition. Something that Barcelona have missed sorely is the excellent combinations between Leo Messi and Alves down the right. This allowed the team to safely, yet quickly progress the ball.

The American is able to cut in very efficiently as well which makes him a good choice for overlaps as well as underlaps. Tactically, Dest is very quick at decision making. When the right-central midfielder drifts wider, Dest drives into the space created though the centre. He is very comfortable receiving and playing in tight spaces, which is something that could immensely help Barcelona. The 19-year-old isn’t shy to cross often either, and he backs those crosses with a good delivery more often than not. In the final-third, he shows good visions. Often, he can be seen drifting in and playing a ball through the lines.

As of now, Barcelona and Bayern are the front-runners to sign Sergino. Sergino Dest is a very young player who is very impressive for his age. In Dest, Barcelona achieve two highly important things. Firstly, to acquire a young player who could be an integral part of the squad for years. Secondly, and more importantly, the Blaugrana would take a step in the right direction, towards the playing philosophies the club is based upon, and away from the recent loss of identity.

Eemrson broke into Brazilian football at Atletico Mineiro and accumulated a playtime of over 2,000 minutes. He captured the attention of Barcelona and along with Betis, the two clubs carried out a deal in which he is contracted to play for two seasons with Betis and then join Barcelona. As of now, he has played 43 matches for Betis, getting three goals and six assists in the process.

Emerson has been given a lot of freedom at Betis. With Nabil Fekir drifting inwards, Emerson has a lot of space to himself. He has taken this opportunity well and showcased his attacking ability superbly. He drives forward at every opportunity and shows an attacking mentality. His work rate is impressive, not only in attack but in defense as well. He covers a lot of ground in each match. His defending, however, is not polished. Though it is partly due to the numerous tactical problems Betis have faced under Rubi, this is still an aspect the Brazilian needs to improve upon.

Emerson has had problems with positioning and knowing which run to track with Betis’ system putting him against more than one opponent at times. His acceleration has helped him many times though. With his pace and work rate, Emerson does work relentlessly in defense.

At six feet, Emerson can also be a threat from set-pieces. His attacking contributions are still strong without this aspect. Excellent at linking with the attackers and with attacking versatility, the 21-year-old shows more promise in attack than in defense. Emerson hence won more fouls and had more touches in the opposition box than any other defender in the 2019/20 La Liga season.

Barcelona would be improving over Sergi Roberto with Emerson at right-back. For €12 million, Barcelona can sign Emerson from Betis through a clause in the contract. However, Barcelona might face problems in terms of defensive stability the same way they did with Semedo. Though Emerson is a very promising player, he must defensively improve significantly to warrant starting for FC Barcelona.

Max Aarons has had an incredible rise in the past few years. From being selected in the Men/s PFA Championship Team of the Year to becoming one of the most important players for Norwich next to only Tim Krul and Pukki, Aarons has gone from strength to strength. Now at 20 years of age, the English youngster is one of the most promising right-backs in the world.

Aarons is another player who has the kind of profile a Barcelona full-back should. His dribbling ability and pace is superb, he is positionally very mature and is solid in attack as well as defense. One of his characteristics are his runs down the right, with and without the ball. Aarons has an attacking mindset which is showcased through his constant attempts getting forward when possible. Aarons completes a lot of take-ons and he is impressive when driving forwards as he often does.

Though he has a strong attacking style of play, he does not compromise in defense either. Aarons is very calm when defending. He has great awareness and he knows when to commit and when to not. With well-timed tackles and good judgement, the youngster gets the ball through pure tackling as well as interceptions often and efficiently. However, somewhere he struggles is in a 3v2 situation. He often leaves space between himself and the central-defender and makes the wrong decision when tracking his marker.

In attack, Aarons shows incredible ability as well as the potential to do much better. He is very good at choosing whether to whip the ball in, or to chip it, or to lay it off for a teammate in the final third. His attacking decision making is very mature for his age. Often, he combines with his teammates to get into the box and take a shot or pull the ball back. His shooting ability is surprisingly good. Considering the tight angles full-backs usually find themselves facing, accuracy and good decision making is a huge factor. Aarons shows he possesses a fair amount.

As of now, Aarons is linked with Barcelona but not heavily. One thing to consider when signing him apart from his abilities would be the problems English players have when fitting into Barcelona. Recently, Marcus McGuane and Louie Barry found it tough and we’re unable to progress at Barcelona. Though he may be a good choice for Barcelona, it seems unlikely that he will leave Norwich, especially for a club outside England. Regardless, Max Aarons is one of the most exciting right-backs in world football with a bright future ahead of him and one to keep an eye on. For Barcelona, Aarons seems like a very good fit on paper.