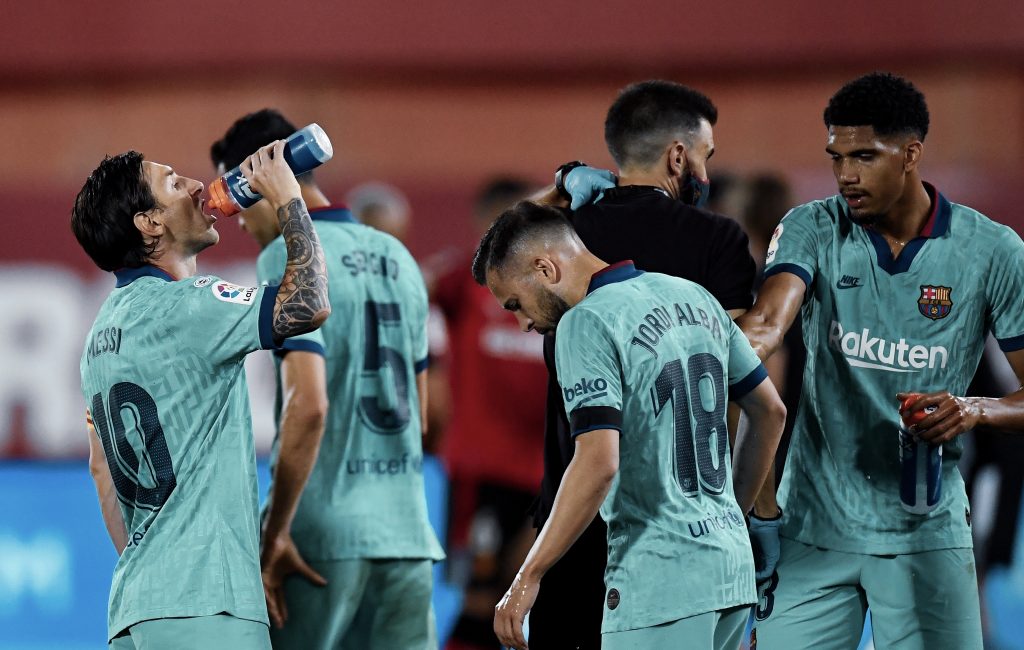 As Barcelona beat Mallorca on Saturday by 0–4, which are the five positive signs that can be taken from such win?

FC Barcelona is back in business. In their first game since the lockdown, the Catalans went on to score four goals to overcome a strong competition at the recently renamed Visit Mallorca Estadi. In spite of being away from the sport for so long, the men in blue and clarinet put on a good show with a lot of good signs. But which were the five main positives from Barça in their 0–4 victory over Mallorca?

Just as the case is with any task, beginning well was very important for Barcelona. Their lead at the top of the table was a mere two points going into this match. Any mistake therefore could have cost them in the battle for the title, not to mention the pressure that would mount as a result. As it turned out, Barça put up a good performance and began with a solid win, thereby putting pressure on Real Madrid, who are restarting their own campaign today. There is no doubt that this performance will be a boost for the blaugranes.

Call him the “medicine man” as Ray Hudson would, or Messiah as most fans would, there is no denying that an in-form Lionel Messi is vital to Barcelona. While his presence on the pitch alone has been known to boost the squad, they need him at his best as they approach the business end of the season. Things, however, looked a little worrying as it was reported that the number 10 had an injury setback in training a few days ago. All these worries were put to rest by the Barça captain yesterday, though, as he assisted his teammates for two goals before completing the scoresheet himself.

3. Different names on the scoresheet

Barça has been over-reliant on the scoring prowess of Messi for far too long. Yesterday however, there were different names on the score-sheet. While Arturo Vidal opened the scoring for the azulgranas, Martin Braithwaite scored his first goal for the team to double the lead and Jordi Alba the third. There is no doubt that manager Quique Setién would have been elated to find so many of his players on the board – especially as games are coming in quick succession henceforth and he might have to rest Messi at some point or the other.

❛ I think we controlled the game well. The first goal gave us a confidence boost and it made things easy ❜

There were concerns about the defensive side of the team during the whole season. These were compounded yesterday by the fact that Clément Lenglet, Gerard Piqué’s partner in crime, was out with a suspension. With Samuel Umtiti just making his way back from the injury, Setién decided to put his faith on young Ronald Araújo, a promising talent from Barça B. It wasn’t Araújo’s first outing for the senior side, as he did make one appearance before. Nonetheless, that had lasted less than a quarter of an hour as he was given a contentious red card against Sevilla.

Despite the one versus Mallorca being his first start for the team, Araújo was quite composed in his positioning and on the ball. Admittedly, he was outplayed by Real Madrid loanee Take Kubo a few times. On the whole, however, Araujo managed well and complimented Gerard Piqué quite smoothly, thereby helping his team maintain a clean sheet. The performance would be a great confidence booster for the youngster and a sigh of relief for his manager.

5. An away win with a clean sheet

Barça’s away blues had become something of a curse this season with a win percent of a measly 38.4% away from the Camp Nou as they approached this match. The total number of goals they scored away from home was shockingly less than those conceded till yesterday: 18 and 19, respectively.

This was definitely not a good sign; mostly considering the fact that out of the eleven games that remained, seven were going to be away from home. A solid display and a win was therefore absolute necessity for Barcelona to get their record straight. And that is exactly what they did. Scoring four goals and keeping a clean sheet would come as a much needed breather for the league leaders.