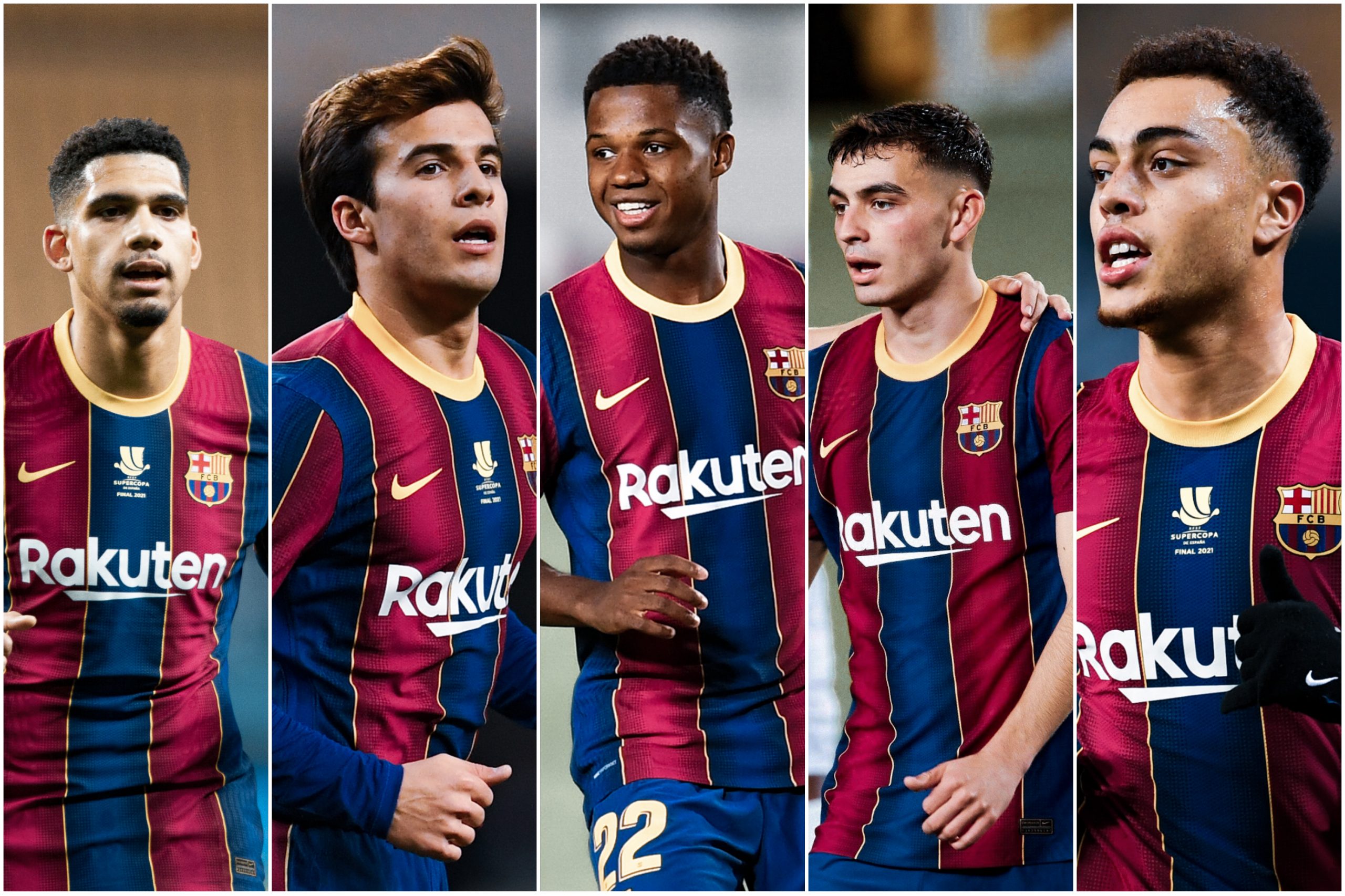 Photos via Getty and Imago

The name FC Barcelona will always be congruous with youth and talent. Barcelona youngsters have a rich history of rising through the system and etching their names onto football’s biggest stage. What comes to mind immediately is the club’s golden era. Every Cùle on the planet will have only fond memories of the times between 2008 and 2012.

Well over a decade after Johan Cruyff’s Dream Team, Barcelona once again enjoyed their most dominant and successful spell in world football. Barcelona’s rise to the very top of the footballing elite between those years was nothing short of miraculous. Many elements blended together in perfect harmony to build one of the greatest footballing outfits of all time.

First, Josep Guardiola’s appointment as the first-team coach and then, his ideal mix of youth working in tandem with the experienced players. Guardiola managed to get the best out of the Barcelona youngsters, translating their talent into world-class ability. His trust in Pedro and Sergio Busquets as he promoted them to the first team paid massive dividends. As did his faith in Gerard Pique, as well as the iconic Xavi-Iniesta duo, who while supremely talented, were yet to hit their prime.

What followed was an avalanche of titles and rewritten football history books. However, the landscape at Barcelona has changed quite a bit since then. But after a fair few years, the Blaugrana can finally have some optimism looking to the future. Finally, a crop of youngsters with real pedigree have all assembled, waiting to explode.

There are plenty of players who have the potential to make this list and it is tough to narrow it down to even five. Such is the class of La Masia and some of the new Barcelona youngsters who have arrived from outside. Here are 5 of the brightest raw diamonds in Barça’s crown:

The boy whose name is on everyone’s lips right now. Although, mostly in the headlines for unfortunate reasons right now, Ricard ‘Riqui’ Puig must soon become a mainstay in Barcelona’s midfield. Tiny in stature but with a bigger personality than many senior players, Puig is an absolute joy to behold on a football pitch.

Standing at just under 5’6″ tall, Puig has no regard for doubters, for his opponents’ size, or the pressure of the occasion in competition. He is gutsy and charismatic both on and off the ball. The 21-year-old uses his body extremely well. He can turn on a dime, ghost past the opposition press as if it never existed, run like a hound to win the ball back, capable of silky dodges with it at his feet and can release his teammates in the blink of an eye. All traits that constitute the ideal Barcelona midfielder.

Last season, he revealed it to the Barça fans who hadn’t observed him with the B team previously. Under Quique Setien, Puig seemed poised to become a mainstay in the first team. But alas, football isn’t that simple. He is clearly yet to convince Ronald Koeman, but like several other Barcelona youngsters in this list, it is only a matter of time before we see him work his magic regularly.

Injuries to key defenders this season have already marred Barcelona’s season. In what we can only call a strange campaign so far, Ronald Araujo has been an absolute revelation at the back. With a lengthy injury to Gerard Pique and trouble for Sergi Roberto, Barça have been heavily understaffed in defence. Araujo and Oscar Mingueza have had to step up and they have been nothing short of fantastic.

It is no secret that since the retirement of a certain Carles Puyol, Barcelona have largely struggled at the back. Neither the youth nor most of the transfers in that position have shown any signs of coming close to filling the iconic captain’s shoes. And although it is possible that nobody ever truly can, there is reason aplenty to be excited about Araujo, especially after he was named in ESPN’s Breakout Players list of 2021.

The tall, commanding centre-half is showing everything one looks for in a defender. He has impeccable reading of the game, undeterred in his challenges, alert and very vocal when he needs to be. He has started in eight La Liga games so far this season and has featured for every one of the 360 lung-busting minutes of Barcelona’s last three cup fixtures. And rightfully so, for he has been imperious. And according to SofaScore, he hasn’t been dribbled past in his last ten appearances for the Catalans.

Ronald Araujo is only 21 and has a lot to learn. For example, his distribution is not quite there yet, but he is definitely improving with experience. And for a 21-year-old to become an integral part of Barça’s defence is no small feat. In fact, the last person who thrived on that kind of faith at the exact same age was a certain Gerard Pique.

Fullbacks have been ever instrumental in Barcelona’s success. Similar to Carles Puyol’s departure, Dani Alves leaving left another major void in the Barcelona XI all these years. The Brazilian was an era-defining fullback, who was an absolute menace from right-back. Naturally, when one of the greatest fullbacks of all time leaves the club, filling his boots is no easy task. But Barça have not even come anywhere close to replicating Alves. He remains to date, the most decorated footballer in history.

The right-back position has since been extremely problematic. Makeshift deputies and largely failed transfers had created a crater with worryingly low attacking output and a susceptible defense. Cules began wondering whether the club would ever manage to solve the issue. That is of course, until the recent arrival of Sergino Dest. The young American from Ajax has been an absolute revelation for Barcelona. After waiting patiently for his chance, an injury to Sergi Roberto saw him explode to life.

The 20-year-old was linked to Barça multiple times before finally making the move from Amsterdam to the Camp Nou. Fearless, talented and unnaturally mature for his age, Dest possesses an extremely versatile skill set, priceless for Barcelona right now. His incredible dribbling ability is complemented by his composure, brought about by his background as a midfielder. His verticality and willingness to take calculated risks makes him highly unpredictable, but a joy to link up with if you’re a teammate.

He also works immensely hard while tracking back, with seemingly endless energy. And despite his relatively small stature, he is tenacious and does not back out of a challenge. He seems to have already found a great understanding with Lionel Messi, but at the same time does not rely only on him to showcase his ability. And all this came at a price of just €21 million. Of course, it is too early to liken him to Dani Alves or to label him a saviour, but rest assured, Sergino Dest is a serious footballer.

Not much has been left unsaid about Ansu Fati. The teenager hailing from Guinea-Bissau has already begun forging his path up the ranks. Fati since last season has been constantly proving the old adage- “If you’re good enough, you’re old enough.”

At only 16, Ansu Fati was handed his debut, becoming Barcelona’s second-youngest debutant behind Vicente Martinez. And right since the beginning, he has set his sights on rewriting history. Somehow, despite his tender age, Fati always seems to know what to do next. A great dribbler, with a keen eye for goal and also the vision for the right pass. He is fast not only on his feet but also incredibly cognitive. Where raw talent ends, Fati possesses incredible sensibility.

He already has his name on a whole host of records since his debut less than two years ago. Barça’s youngest goalscorer in the league as well as the Champions League, Spain’s youngest ever goalscorer and many more. Fati has proven that he will be a mainstay at the club for many years to come. Though he is out with a lengthy knee injury at the moment, he has had a blistering start to the season with five goals and four assists in just ten games.

Once the 18-year-old returns to action, we can expect a lot more of the same from one of Barcelona’s biggest rising stars. After his breakout campaign last season, he already seems to have earned the trust of Ronald Koeman prior to his injury. And the young winger is only just getting started.

Pedri Gonzalez is the latest accumulation out of all the new Barcelona youngsters that have broken into the first team. A lifelong Barcelona fan, Pedri arrived at the club from Las Palmas, stating that his dream had come true. And who would’ve thought that a 17-year-old unknown boy would cause such a stir in Catalonia?

Despite his age and regardless of his slight frame, the teenager has proven himself to be among the most technically gifted players at the club right now. And that is saying something when you play alongside players like Lionel Messi. Pedri is tremendously versatile, having showcased his ability to play anywhere across the midfield and the left-flank. His spatial awareness is second to none, making it seem almost as if he has eyes on the back of his head.

His USPs, of course, are his dribbling and passing ability. He knows exactly what to do when receiving the ball, possesses an exemplary first touch and thus almost always seems to be a step ahead of his opponents. Pedri is also very agile and can get the ball out of his feet to turn in the blink of an eye. He has been so impressive that Koeman has featured the young midfielder in every game of the season, despite altering his midfield completely thrice. And his style of play has already drawn comparisons to the likes of Andres Iniesta.

There is not a singular doubt anymore that the Canarian is an integral cog in this Barcelona machine for years to come. Pedri Gonzalez is the real deal. To think Barça only had to pay €5 million for him is not just a steal; it is an aggravated robbery in the best sense of the term.

Frankly, naming just these five might be a bit of a disservice to some of the other Barcelona youngsters. The Azulgranas have plenty of promising youth among their ranks right now. So many more players can be a part of this list, and by extension, they most certainly are. Players like Frenkie De Jong, Oscar Mingueza, Alex Collado, Inaki Pena, and more are all going to act as the vital core of this club in years to come. After all the darkness, the future has never looked brighter for Barça.