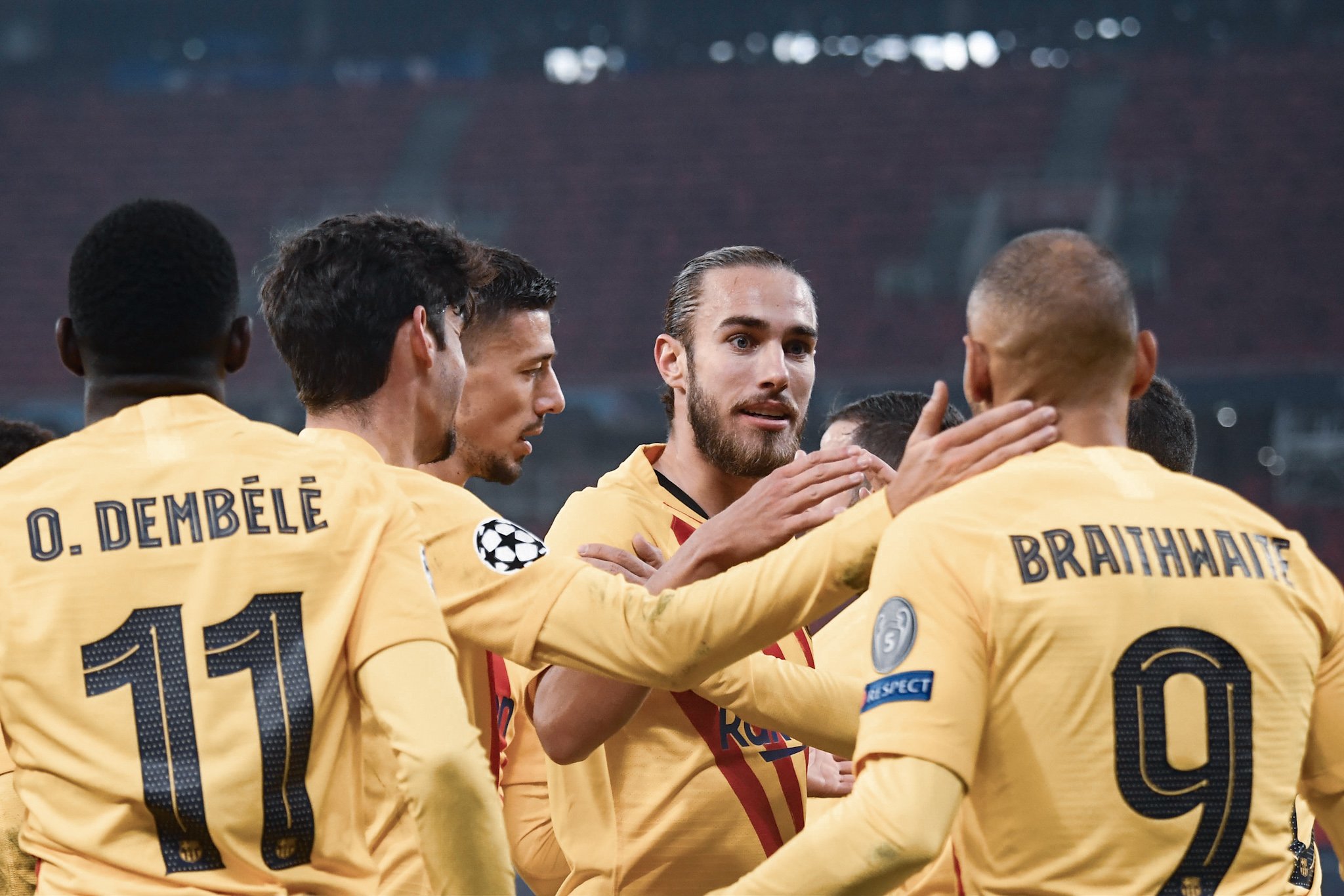 As Ronald Koeman’s Barcelona looked to continue their perfect Champions League 2020/21 record, they faced Serhiy Rebrov‘s Ferencvaros side whose Europa League hopes were at stake at the Groupama Arena.

Compared to La Liga, Barcelona’s UEFA Champions League campaign has been much stronger. With 12 points in four games, with just two goals conceded and 13 goals scored, the confidence was high. However, for Ferencvaros, the best possible finish is in third place in Group G, which would see them qualify for the Europa League.

As a motivated Ferencvaros side faced Ronald Koeman’s Barcelona, a 0-3 victory in favour of the Blaugrana was far from ideal for the Budapest outfit. In this analysis, we take a look at the patterns seen throughout the match and the tactics used by the Barcelona, as well as the Ferencvaros side.

Serhiy Rebrov’s Ferencvaros side had a clear game-plan from the start. Though this was commendable, there were some immediate issues. The disappointing aspect of this was that Rebrov was either unable to, or was unwilling to make the changes which could have changed the outcome of the match.

The Hungarians looked to play a back-three throughout the match. The two full-backs essentially had little to do in the build-up. Partly because their starting position was too high and also because Barcelona’s forward four were able to cut passing lanes effectively.

Ferencvaros’ number five, Abraham Frimpong, was at the heart of the defence. When building up, he would often drift forward in line with the full-backs. This would have been a good strategy, but the back-three were constantly forced to launch the ball forwards after Barcelona’s pressing.

When defending, the full-backs would tuck in and the wide forwards would drop back to form a 5-4-1. At times, there were too many players in defence. Isael on one occasion played Griezmann onside when there were six players back defending.

As the above heat-maps shows, forward Tokmac Chol Nguen was barely involved, and the full-backs Endre Botka and Marcel Heister were only active in small parts of the field. There was a clear disjoint between the midfield and the forwards and between the defence and the midfield at times as well.

As expected from the current Barcelona side, the 4-2-3-1 was deployed. Right off from the start, something very apparent was the different player profiles in the attack. With Lionel Messi, Pedri, Philippe Coutinho, three players like to have the ball and roam around. Add Antoine Griezmann to that mix and you have four players who do best in a free role and have a moderate attacking work-rate at best.

With Martin Braithwaite, Fransisco Trincao, Ousmane Dembele this Barcelona side were able to press high and very actively as we shall see later.

The double-pivot of Sergio Busquets was at the core of the team in terms of recycling possession as well as playing balls forward. As the above pass-map shows us, these two were very active in passing and formed strong combinations with many players.

With the full-backs, or rather the wing-backs, very high up the field, Ousmane Dembele and Trincao would tuck in. This would make underlaps easier, as we saw with Braithwaite’s penalty-winning run, and it would also give the full-backs freedom to drive forwards.

The different full-back profiles on either side meant that down the left, excellent combinational play was visible and while Dest was more direct in his approach. This offered the Catalans with more choices in the final third.

A new pattern we saw in the build-up was a diamond between the centre-backs and the pivots. With Mingueza moving a bit further up the field, Busquets would drop back and form the second passing options for Clement Lenglet. Miralem Pjanic would look to find passing lanes in midfield and provide the third, and most direct, passing option.

When defending, Busquets and Pjanic would look to close off the channels, and Alba and Dest would have to retreat quickly. With the back-four completely flat and the pivots cutting passing lanes, the forward were given the best chance to show their work-rate and that is apparent from Barcelona’s goal-protecting activities that started from the front.

Barcelona were devastatingly good in the first half, scoring all three goals and putting the game to bed. They dominated possession, pressed much better than their opponents, all while outshooting and consequently outscoring them. Here is the game data at a glance:

Next, we take a look at the quality of chances created in the shotmaps and xG flow:

Barcelona created brilliant chances all game, and all of the goals came from high-quality chances. Understandably, they took their feet off the gear in the second half. This allowed Ferencvaros to create their most threatening moments. Even then, Barcelona had plenty of opportunities to score at least a couple of goals later in the second half. Profligacy in front of goal meant they could not add to their already impressive goal tally.

Barcelona’s territorial superiority is shown in the following figure. Field tilt – a metric to measure final third passing share, and hence territorial dominance –was overwhelmingly in Barcelona’s favor for most of the game. As shown, Ferencvaros only did better for certain stretches of the second half.

A look at the goals

Here we take a look at the goals Barcelona scored. Ousmane Dembele had one of the games of his life. He constantly linked up with Jordi Alba to create threat down the left. This very combination led to the first two goals of the game. For the first one, Dembele and Alba had some nice little one-twos, before Dembele released Alba into space behind the Ferencvaros right back. Alba used his speed to reach the ball ahead of his tracker and lay off a nice low cross to Antoine Greizmann, who made an excellent run into the box. Greizmann finished the move with an exquisite flick. Here are illustrations of the entire buildup and animation of the final moments :

The second goal came from a long buildup. First, a shot by Sergino Dest was blocked in the box. Following a flurry of passes, Griezmann made a cross-field pass to Alba. Alba laid the ball off to Dembele, who beat his marker by speed and played another low cross into the box. This time, it was Martin Braithwaite who made an intelligent poacher’s run into the box to prod it home.

Braithwaite made yet another great run behind Ferencvaros’ defence before getting fouled just when he was getting ready to shoot. Dembele scored from the resulting penalty.

Clement Lenglet could return from an injury scare to start the game, so Barcelona had two senior members at least in the beginning. The defence remained unperturbed for most of the half. Lenglet and Oscar Mingueza did an admirable job of cleaning up loose balls and snuffing out attacks. Ferencvaros rarely managed to get the ball to Barcelona’s final third. Here is a time-evolution chart of PPDA, which measures press intensity:

Evidently, Barcelona pressed much better throughout the game. The only interval where Ferencvaros had any luck pressing was in small intervals in the second half.

Next we take a look at Barcelona’s defensive heatmap.

This is probably the first time Barcelona have pressed this high up the pitch. Their effort paid dividends too, as Ferencvaros really struggled to build up successfully from the back, as shown in the following:

On the other hand, while Ferencvaros tried pressing higher, Barcelona were able to build through the press fairly regularly. The following images show Ferencvaros’ defensive efforts and Barcelona’s unsuccessful passes.

Several youngsters got a runout yet again. Mingueza continued to impress displaying composure on the ball and no-nonsense defending. Dest had yet another stellar show as the right back. He was impressive in tracking back, showing both speed and strength to nullify Tokmac Nguen. Dembele was electric; scoring and assisting one goal each and could have had more to his name. He finished the game wearing the captain’s armband.

Frenkie de Jong came on in the second half to replace Sergio Busquets and ended up playing centre back after Lenglet was withdrawn as well. Francisco Trincao got a start and played for about 80 minutes. While wasteful in front of goal and generally had some ugly touches, he also came up with some great dribbles. He should have really scored after being set up one on one by Dembele.

Carles Alena, Riqui Puig and Konrad de la Fuente all had cameos as well. Puig was particularly impressive, racking up 3 key passes in 28 minutes. He could have had an assist had Dembele elected to shoot from his pass.

Five wins out of five in the Champions League. Three victories in a row in all competitions. Three clean sheets. Eleven goals scored. Ronald Koeman probably could not have asked for a more favorable series of results for his team. Not only did important players like Lionel Messi and Frenkie de Jong get some rest, the fringe players got some decent run-out. Greizmann has scored three goals – he surely is brimming with confidence right now. Braithwaite has scored 4 goals in 3 games. Dembele looks to be in good form. The team seems to be hitting better stride. Injuries notwithstanding, this is a perfect time for Ronald Koeman’s Barcelona to make up for all the points lost in the league.