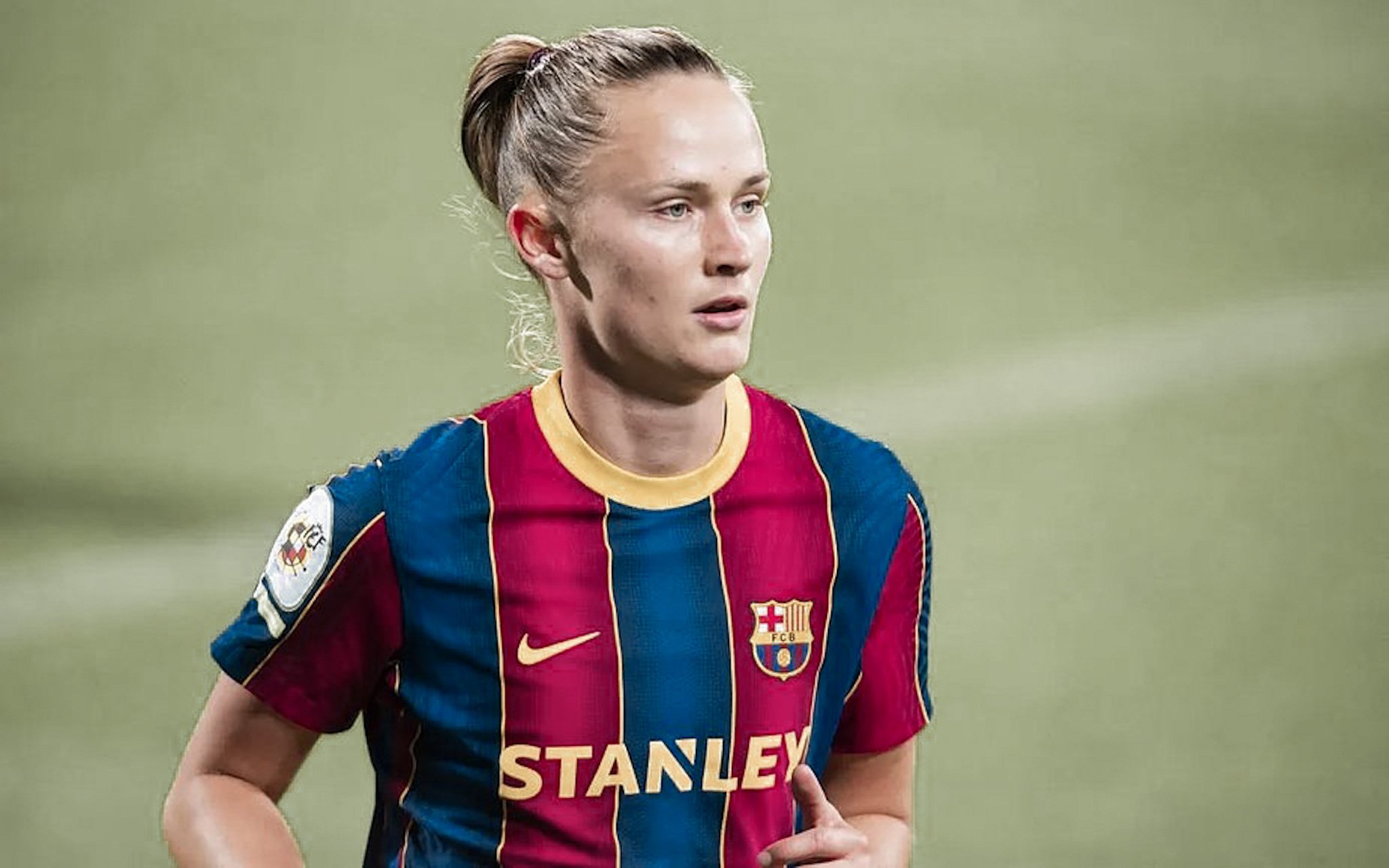 FC Barcelona Femení maintained their 100% record in the past month, winning their matches against Real Betis, Atlético Madrid, and Real Sociedad, scoring 13 goals and conceding only 1. Norwegian winger Caroline Graham-Hansen has proved to be integral to these wins, contributing 4 assists and leading the forward line against two tough teams, Atlético Madrid Femenino and Real Sociedad Femenino.

After winning the league, Supercup, and reaching a UWCL semifinal with Barcelona in her first season, she is determined to accomplish even more with the club. Her drive for success has shown through her consistent and ever-improving performances since the start of the new campaign. Caroline Graham-Hansen’s performances have been integral to Barcelona’s wins among a tough schedule, making her our November Player of the Month.

Barcelona faced a tricky away trip to Sevilla after the international break to face a physical Real Betis team. Caroline Graham-Hansen was a constant threat on the right-hand side, dribbling past defenders to her liking and creating plenty of chances. Her famed partnership with Marta Torrejon also created plenty of headaches for Betis’s left side.

CGH’s attacking prowess straight out the gate set the tone for the entirety of the match, giving FCB Femení plenty of attacking momentum. She started the game brilliantly creating a goal-scoring chance within just the first minute. If not for a last-ditch clearance from the defender, the ball would have ended up in the net. She followed it with a powerful shot from just inside the box to the right side of the post which missed the goal by hardly a foot.

CGH picked Alexia out in the box with a short free-kick in the 32nd minute to put the game to bed. However, Alexia missed the opportunity by trying to assist another player instead of going for a goal. This happened again not soon after when Graham-Hansen started a mazy run on the right and picked out Aitana in the box who squandered another chance.

She continued to poke holes in Real Betis’s defense, who had no answer to her attacking play on the right. A moment of brilliance from Vicky Losada put Caro through on goal and her fine display was rewarded with a deflected shot ending in the back of the net. Her final act of brilliance came in the 88th minute with an assist to Jennifer Hermoso who finally broke the duck in the league with a close-range tap-in.

CGH played her next match when the Estadi Johan Cruyff hosted the biggest rivalry in Spanish women’s football, Barcelona vs Atlético Madrid. After two postponed games, Barça entered the game without playing any game for 10 days, leaving them rusty for one of the biggest matches of their season. A win against FCB Femení would have made the title race more interesting, but Caroline Graham-Hansen has different things in mind. Atlético Madrid ended up being yet another victim of the Norwegian’s fine attacking display.

CGH created the first clear chance of the game in the 5th minute with a fine dribble into the box, sending a cross towards the far post which resulted in a scramble in the box. After having an early reprieve from Cata’s saved penalty, Barcelona were on the front foot again with a solo run from Graham-Hansen that split Atléti’s defense and went out for a corner. These plays demonstrate the trend that most of Barca’s initial attacking plays come down the right side, and CGH is an integral part of that.

She made Atlético pay for their penalty miss in the 30th minute with a defense splitting pass to Patri, who controlled the ball and skipped past the challenge from the onrushing goalkeeper to give Barça the lead.As the game wore on, Barça lacked some width on the left side due to Mariona Caldentey playing more towards the inside, making Caro’s role in stretching Atleti’s defense even more integral.

Her creativity was called into action again in the 83rd minute when she spotted an unmarked Lieke Martens and put the ball on a plate for her to seal the victory for the Catalans.CGH was at her best when the team needed her to be as she created 5 chances and made 5 key passes along with two beautifully crafted assists.

Barcelona faced Real Sociedad Femenino after another 10 more days without a match. This match had plenty of narratives. It was the first time since the 10-1 Supercopa Femenina final rout where the two sides met. It was a game between two friends, Lluís Cortés and Natalia Arroyo, two highly-rated coaches, and two former coworkers in the Catalan Women’s National Team. It was also the match week that Europe’s giants fell (Wolfsburg, Lyon) so all eyes were on Barcelona on the chance that they slipped up against a transformed Real Sociedad. The match ended up with a score to 5-1, but it started poorly and could have ended even worse if Barca didn’t capitalize on their chances in the first 20 minutes.

In the first half, Caroline Graham-Hansen worked hard to break a resolute Real Sociedad defense who didn’t give her any space on the right to exploit. Her defensive work rate was clearly evident in the first half as Barca were struggling to find an attacking rhythm since both of their goals weren’t really scored from clear-cut chances. In response to CGH’s presence on the right, Barcelona created a flurry of opportunities down the left using the other winger, Lieke Martens. However, they failed to capitalize on any of the chances.

Graham-Hansen started to cause danger towards the 60th-minute mark against Real Sociedad’s tired legs, combining well with the midfielders to create plenty of goal-scoring chances. She finally got her assist to Alexia with a cut-back pass.

Caroline Graham-Hansen was crucial to Barcelona’s winning ways this month, even more so than she usually is. As her Barcelona career goes on, she has only continued to improve in her chance creation, decision-making, goalscoring, and passing, and her performances this month made that even more evident. CGH continues to be one of the most vital figures of the Barcelona squad.