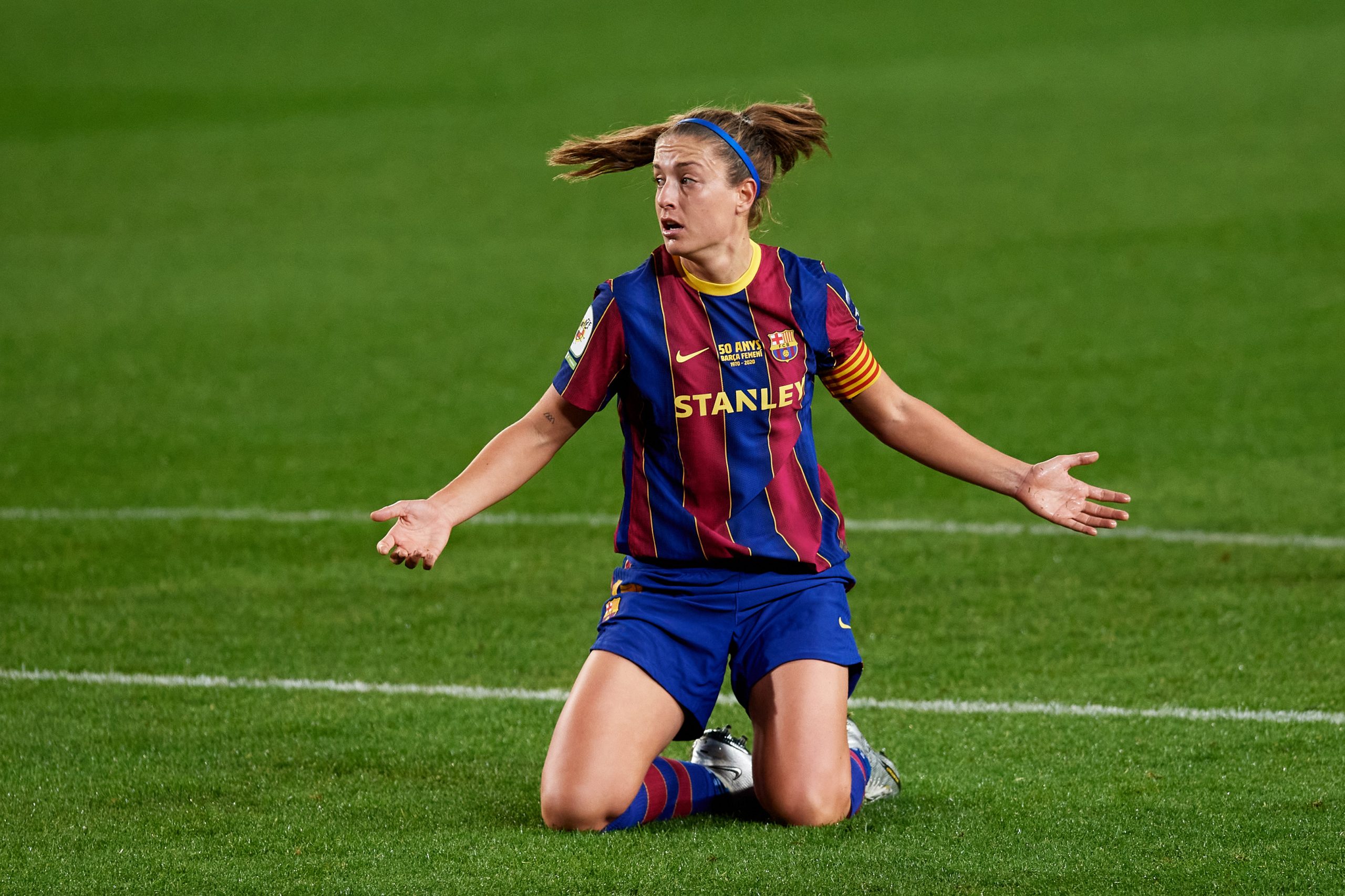 Another month down, another couple of wins for FCB Femeni. The team is in smooth sailing towards their second consecutive league title with an otherworldly wins-only season, including 73 goals scored and only 3 conceded. January was a rough month for the Catalan team, however, as they faced multiple match cancellations due to both a freak snowstorm and COVID-19 positives alongside an early Supercopa Femenina exit. Aside from the many downs, there were plenty of positives. FCB Femeni played a history-making match at the Camp Nou, the team’s first competitive match in the iconic stadium, and they dominated in a resounding 5-0 win against local rivals Espanyol Femeni. Later in the month, they smashed Rayo Vallecano Femenino 7-0, and at the end of January, they won the second-ever El Clasico Femenino against Real Madrid, scoring 4 at the Estadi Johan Cruyff.

Given the many iconic moments in this month alone, it was never going to be an easy choice. Plenty of players showed up big this month. Asisat Oshoala seems to have returned to form after a rough few months, scoring four goals and having many quality performances aside from her goalscoring. Melanie Serrano has had one of her best seasons in recent memory, and her performances this month were no exception. But if there was one player who came in clutch and made history, it was Alexia Putellas. She started the year strongly by being the first-ever woman to score a competitive goal at the Camp Nou. Her free kick in the dying minutes of the Supercopa Femenina saved Barcelona from going out in regular time against Atletico Madrid. At the end of the month, she drew first blood in the second-ever Clasico, imposing herself against Los Blancos with relative ease. Aside from her goalscoring, she once again had multiple dominant performances in terms of her assisting, passing, and attacking play. Once again, Alexia Putellas is deservedly our player of the month for January.

January 6th marked a historic day for Barcelona as they entered the Camp Nou pitch for the first time after 50 years. The Blaugranas started the game on a bright note with Alexia dictating the play. At the 4th minute of the game, Alexia had a tame shot at the goal following a cut-back from Melanie Serrano. As the shots racked up in the beginning minutes, it looked like Barca would follow this season’s pattern of scoring an early goal. However, Barca were devoid of any clear cut chances after that, and Espanyol started to grow defensively as time went on.

The second big chance fell to Alexia Putellas in the 43rd minute after a cutback this time from Patri following a beautiful couple of moves inside the box. Again, Alexia’s shot was too weak with her right foot and it found the hands of the goalkeeper. However, Alexia made up for her misses when the turning point of the game came in the 45th minute. During a stoppage-time corner, Alexia raced past the marker to head the ball into the far corner of the net, giving Barca some much-needed breathing room going into the half-time. Barca cruised to victory in the second half with a scoreline of 5-0 after goals from Melanie Serrano, Marta Torrejon, Lieke Martens, and Ana Maria Crnogocevic, which ended any hopes of a comeback for the local rivals.

Barca played Atléti in the Spanish Supercup semifinal on January 13th. Both the teams were going into the game after Spain’s freak snowstorm, “Filomena,” canceled all the league’s Madrid-based weekend matches. Atlético Madrid announced the re-hiring of manager Dani Gonzalez on the eve of the matchday, sparking a lot of excitement going into the game. The game followed a similar pattern to that of the one played in August when Barça defeated Las Colchoneras to clinch a spot in the UWCL semifinals. As expected, Atleti defended with 9 women at the back and played long balls to Ludmila whenever they had a chance to counter.

Even though Barcelona dominated the game, they failed to score and paid for their lack of effectiveness when Atléti were awarded a penalty in the 66th minute. Merel van Dongen then converted it to give Madrid the advantage. It looked like everything was lost until the 90th minute when Alexia was brought down at the edge of the box. Although it looked like Barcelona was going to lose in regular time, the midfielder had other ideas and took matters into her own hands. Alexia scored a sublime free-kick past a diving Hedvig Lindahl who, until then, was keeping Barca at bay for 90 excellent minutes. In the end, it was not enough for Barca as they paid the price for not converting their chances, also being kept down by some harsh refereeing decisions not going their way. The Catalans ended up losing to Atléti on penalty kicks and were knocked out of the tournament, thereby missing their first possible title of the year.

FCB Femeni came into the game after their tough semifinal loss to Atletico Madrid in the Spanish Supercup, hoping to get back into their rhythm. Barça scored an early goal inside 5 minutes after Alexia’s header was parried into the feet of Jennifer Hermoso. After the first goal, it was one-way traffic for the home side as they punctured Rayo’s defense with another 3 goals- Alexia being the catalyst of each of them.

Alexia scored her first goal of the game following Melanie’s cross. She stayed in position and gracefully chipped over the keeper’s head to double Barca’s lead. She remained a key part of the midfield in tracking back and dictating the entirety of the half and scored her second goal following a well-worked team move. In the 40th minute of the game, Asisat Oshoala was sent through by Jennifer Hermoso, and Asisat teed up Caroline Graham-Hansen to score from close range. However, Hansen’s shot was blocked and the ball fell into the path of Alexia for an easy tap-in. Barça easily swept past mid-table Rayo to remain top of the table after the matchday.

Barça faced their new league rival Real Madrid Femenino in the last game of the month, 11 days after their match against Rayo due to multiple match cancellations. This was expected to be a totally different game compared to their first encounter, as Los Blancos have grown into the league and were occupying the second-place position at the time. All the match previews indicated that Real Madrid were in great form, recording only 3 losses in 15 games, with a much more balanced and cohesive team than their first game against the Blaugranas. Additionally, if the team from Spain’s capital won at the Estadi Johan Cruyff, they would’ve gone to the top of the league.

The match started with Real Madrid and Barcelona both going on the offense and trying to assert themselves. Despite Madrid entering the match bravely and attacking well, Barcelona scored first just 14 minutes into the match. Once again, it was the captain, Alexia Putellas, who kicked it off for the Catalan team. Alexia was intuitive in collecting the ball at the edge of the box and scoring a blistering strike to the top left of the net that Misa Rodriguez struggled to get a hand on. From then, it was a similar pattern as the first Clásico, and Barça advanced to a 3 goal lead by the end of the first half. The match proved that Madrid’s women have improved a lot, but they were never a match to the 2019-20 champions as Barca ran out winners 4-1 at the end of full-time.

When Alexia is fit and firing, there isn’t a way to stop her from creating chances and scoring goals. After her breakout out season last year, she’s continued her form and is having yet another world-class season. Alexia only continues to get better and better, and with a lot of important competitions in the next few months, her performances will be integral to the success of the club.