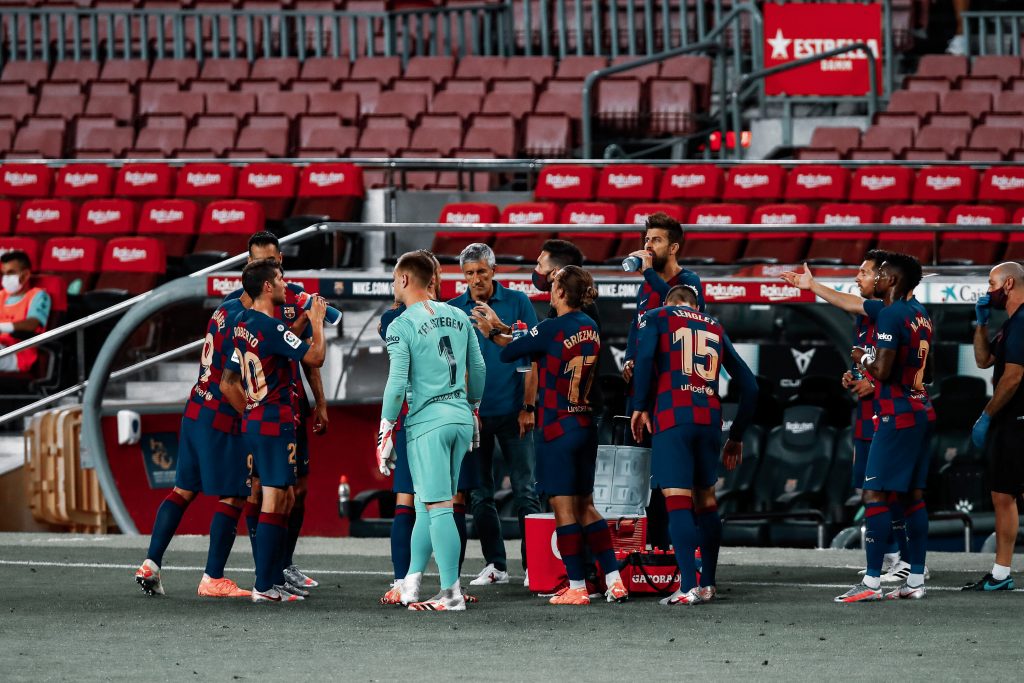 As coach Quique Setién continues to search for the right formula, and while the systems should not be definite and rigid, what are the main strengths and weaknesses of the different formations for Barcelona?

In a match that meant more than points gained or dropped, FC Barcelona faced its city rivals Espanyol yesterday at the Camp Nou. As the hosts scraped through a victory on the smallest possible margins, the visitors succumbed to their fate of relegation from first division. At the end of the day though, it is three more points in the kitty for the blaugranas. But what did the performance yesterday tell us, especially in light of the previous match?

Barça’s performance against Villareal over the weekend, which led to a 1–4 triumph, was hailed by many as the turnaround for the team, as well as for certain individuals, especially Antoine Griezmann. While nothing should be taken away from that victory, reading too much into it was always going to be troublesome. Any proper assessment needs valid data, and a one-off match is not really enough data.

The facts speak for themselves. With all the major attacking personnel in the team – Lionel Messi, Luis Suárez and Antoine Griezmann – being central in their position, manager Quique Setién had no choice to adopt a 4–3–1–2 formation, thereby allowing those attackers to roam around in their favoured positions. It helps offensively in the sense that it allowed them to find each other easily. But is it without drawbacks? Is it the solution for this stuttering side in the short term at least? If not, what formation would suit them best, and why? This is what we will try and discuss here.

The manager’s thinking behind utilising this style is simple enough. You have three world-class attackers at your disposal. None of them prefer to cruise near the corner flags. Nor do any of them fancy a stint on the bench. So Quique Setién deployed Suárez and Griezmann in the advanced positions, with Messi right behind them. The biggest positive of this formation is that all three of them were happy, and that showed on the pitch. The quick passes between them were there and so were the switching of positions. It worked against Villareal too, only to be exposed against Espanyol. So what happened?

Well, the issue is as systemic as it is dependent on the opponent. When the attackers are all stationed close to each other, the attacking division of the team becomes too narrow, which makes it easier for resilient defensive units to snuff it out. The formation worked against Villareal, because they were attacking by pushing numbers forward, leaving spaces for Barça’s front three.

“I felt truly satisfied with the performance and I’m sure the players did too because they played a great game and enjoyed themselves. I would like to play like this in every game but it’s not an exact science. Every game is different but today we did everything right”

Quique Setién
after Barça beat Villarreal on Sunday by 1–4

Against an Espanyol side, with solid banks of defenders though, it was more or less nullified. Owing to the fact that there are no wide-positioned wingers in this system, the opposition’s backline is not stretched. They can comfortably concentrate on the centre, sit back and be happy. In order to break this, then, the wing-backs would have to push forward, leaving their own goal post thinly covered.

This was exposed in the game against Villareal too, when the Yellow Submarine produced a counter-attack, and found Marc André ter Stegen almost isolated in Gerard Moreno’s goal. Espanyol did the same, except Ter Stegen came up with his heroics this time and saved the team literally with his palms.

In light of these observations, there are surely people who would believe that Barcelona should go back to their traditional 4–3–3. Because, as per this formation, there would be two pacy wingers stretching the defence, making overlapping runs and drawing the defenders away from the attacking outlet – something that generations of Barça forwards have successfully emulated. But the fact that it worked then does not mean it would work now.

On paper, this would seem beautiful. This formation actually facilitates the passing game that the culés have enjoyed for long. It allows Sergio Busquets, arguably one of the best defensive midfielders in the game, to work as a focal point. Everything would come and go through him, and with the right people around him, he does that job beautifully. But that is exactly the problem. He does not have the right people around him anymore.

Barça does not have a Thierry Henry, Samuel Eto’o, David Villa or Pedro Rodríguez anymore. Their best bets at wing play as of now is a teenager named Ansu Fati. As good as he is, he is not ready for that starting role day in day out. The management has to be careful not to burn him out too soon. But even if he were to start all the games, what about the other wing? There is still no definite date for Ousmane Dembélé’s return from injury. Some would suggest Lionel Messi, as he has been playing off that right wing for some time now. But that is part of the problem right now.

Messi does what he always does, produce his magic and save the team. But in that process, he would usually cut into central areas, trying to help the team create more. The right wing then would be left empty causing an imbalance in the structure. To make sure that the opposing wing-back does not advance through this lane, Barça’s right-back would occupy the space left by Messi. This would cause further imbalance at the back.

“We might think about making changes like switching to a 4–3–3 or 4–4–2, but we need to evaluate things and find out what to do, but the philosophy is not going to change”

Quique Setién
during his presentation as a Barça manager in January

At the peak of the 4–3–3 at Barça, one would not see both full-backs pushing forward at the same time. Rather, Dani Alves and Éric Abidal complemented each other. The former marauded up ahead; the latter kept the guard up at the back. In the current scenario, Jordi Alba is the one who helps the attackers by advancing from the left side. Notwithstanding, as explained above, the right-back would also be forced to move ahead and, once again, leave the central defenders stranded. This whole imbalance therefore is bound to hurt the team and it has, over and over again.

This is something that Quique Setién relates more with. He did try to implement this in his initial weeks at Barça. 3–5–2 is an effective system, especially against counter-attacks – which is something the Catalans have been vulnerable to.

In the offensive end, this looks promising. Messi and Griezmann could be fielded together. The tandem between them is looking better now, especially with the last two games. The second line or the midfield would comprise of, for instance, Jordi Alba, Riqui Puig, Sergio Busquets, Iván Rakitić and Sergi Roberto – as of now, when Frenkie de Jong is out injured, Arthur Melo sold and perhaps unfocused, and Miralem Pjanić pending.

Alba and Sergi Roberto would provide the immediate support to the attackers. Being comparatively free of defensive duties they could be more involved in the offence. Behind them, the other three would keep the ball rotating and thereby dictate the game.

One of Barça’s greatest problems in recent times has been the wings, with full-backs not offering what should ideally be demanded, and wingers that are not true wingers | Photo by Cordon Press via Imago

The biggest problem here is that Barça does not have enough central defenders available to field three of them together. Their three options as of now are Gerard Piqué, Clément Lenglet and Ronald Araújo. While Araújo is capable, using the only back-up defender along with the other two available ones, every game, is a huge risk.

Nevertheless, Nélson Semedo could potentially be used in the right side, for the time being. With Jordi Alba and Sergi Roberto acting as attacking wing backs, Semedo would be free of advancing duties and could focus more on defence. This system could definitely work, if Alba and Sergi could effectively pin down their opposite numbers.

This formation, once again, could bring back the balance to this Barca side. That said, they would have to stick to the right personnel for this to happen. Griezman can lead the line in the central position, supported by Messi right behind him. Both of them are capable of switching within the area and that makes it all the more better.

On either side of Messi, it could be Riqui Puig and Sergi Roberto. While Riqui would provide the dynamism and creativity thereby helping in breaking the defensive lines, Sergi Roberto, with his tireless runs and brilliant crosses, could complement it on the right side. These two are the most important pieces here. They should be creative but, at the same time, should be the kind of people that do not give the ball away cheaply. Behind those two, Sergio Busquets and Iván Rakitić would work in a double pivot, giving the squad more stability. Rakitić’s presence could also ease the job for Busquets.

The advantage that this formation has over the 4–3–1–2 is that, unlike the latter, the former is not too central or constricted. It could therefore be very effective against teams that set up defensive banks with a 4–4–2 or a 4–5–1.

Ultimately, what should be remembered is that no formation is tailormade for any team. There has to be tweaks and customisations according to the personnel available. However, it does seem quite obvious that under the present circumstances, playing a 4–3–3 would be quite detrimental to Barça. Traditional style or not, they cannot play that style without the right kind of people.

Amongst the other styles, the 4–3–1–2 can still be used against sides that tend to be adventurous. Whereas a 3–5–2 or a 4–2–3–1 seems to make more sense against sides that sit back and counter-attack. For this to work, though, someone would have to convince either Luis Suárez or Antoine Griezmann to stay on the bench.