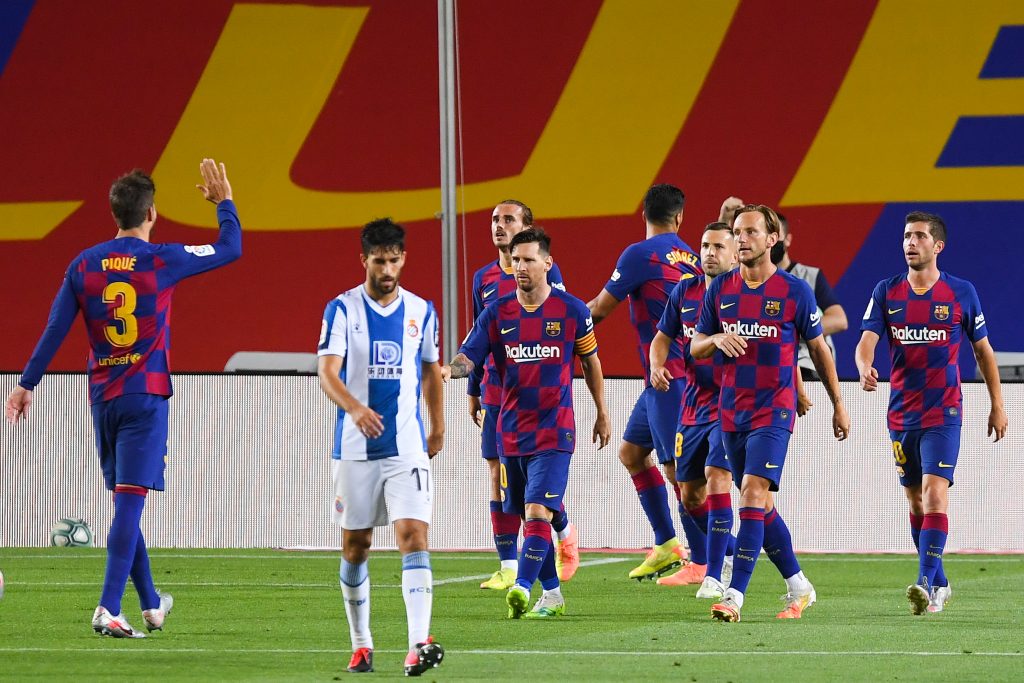 A match summary / review of the Barcelona 1-0 Espanyol game.

Barcelona manages to get the three points against Espanyol at the Camp Nou. This means that Espanyol still has not managed to beat Barcelona since 2009. Barça’s city rivals are also relegated to the second division after tonight, thus the Derbi Barceloní (Barcelona derby) will not be on the screens next season. The hopes for FC Barcelona to win La Liga continue.

FC Barcelona started the game under control. In the first minutes of the game, the home team managed to dominate the possession. The whole Espanyol team got forced to get behind the ball, except for their striker Tomas. In the 10th minute, Ter Stegen made a crucial save to deny Adri Embarba’s shot towards the bottom left corner.

Overall, even though Barcelona dominated the first half of the derby, the team struggled in creating chances and could not score a goal. Despite their less possession, Espanyol has been the more- dangerous side in the first 15 minutes of the game, with 2 clear chances.

While the minutes passed, Barça seemed to be much sloppier tempo-wise compared to their 4-1 Villareal performance last week. With no real movement upfront, the attacking plays have been predictable. Lionel Messi’s free-kick attempt after a foul on Griezmann in the 21st minute of the game has been Barcelona’s best chance so far, while Espanyol hit the post in the 44th minute of the game together with 2 clear chances.

It seems that running the Villareal set-up tonight against a compact Espanyol side who defends with 10-men behind the ball brings back the old problem at Barcelona: creativity. It is important to add that this is the first time that Barça have not attempted any shots on target in a first half this season at home in all competitions (Opta) – and all this against a team who is sitting on the edge of relegation.

Barcelona started the second half with Ansu Fati on the field who replaced Semedo. Sergi Roberto moved to the right-back, and Barcelona rotated to a 4-2-4/4-2-3-1 formation to show full attacking power. However, in the 49th minute of the game, Ansu Fati picked up a straight red-card which brought Barcelona down to 10 men. 4 minutes later, Espanyol player Pol Lazono also picked up a red card from a very similar tackle.

In the 56th minute, Luis Suarez broke the deadlock from a beautiful play by the MSG trident. Griezmann is played in down the left and back-heeled the ball in the path of Messi, who helped it in for Suarez. In the 69th minute of the game, fireworks have been heard in Barcelona, possibly celebrating Espanyol’s relegation.

Overall, Barcelone has increased the tempo in the second half of the game, which immediately showed its effect on the scoresheet. In the 77th minute, Espanyol almost equalized from a corner, but Gerard Piqué was alert enough to clear it. In the last 10 minutes of the game, Barcelona lost their initial control of the game, and this is not the first time happening this season. Ter Stegen made another crucial save in the 90th minute to deny an equalizer. In the last second of the game, Espanyol had another chance with a header that went inches above the crossbar.

After all, Barcelona grabs the 3 points in the Catalan derby and now has to wait for Real Madrid who plays against Deportivo Alavés on Friday.

That brings an end to the Barcelona vs Espanyol match summary.