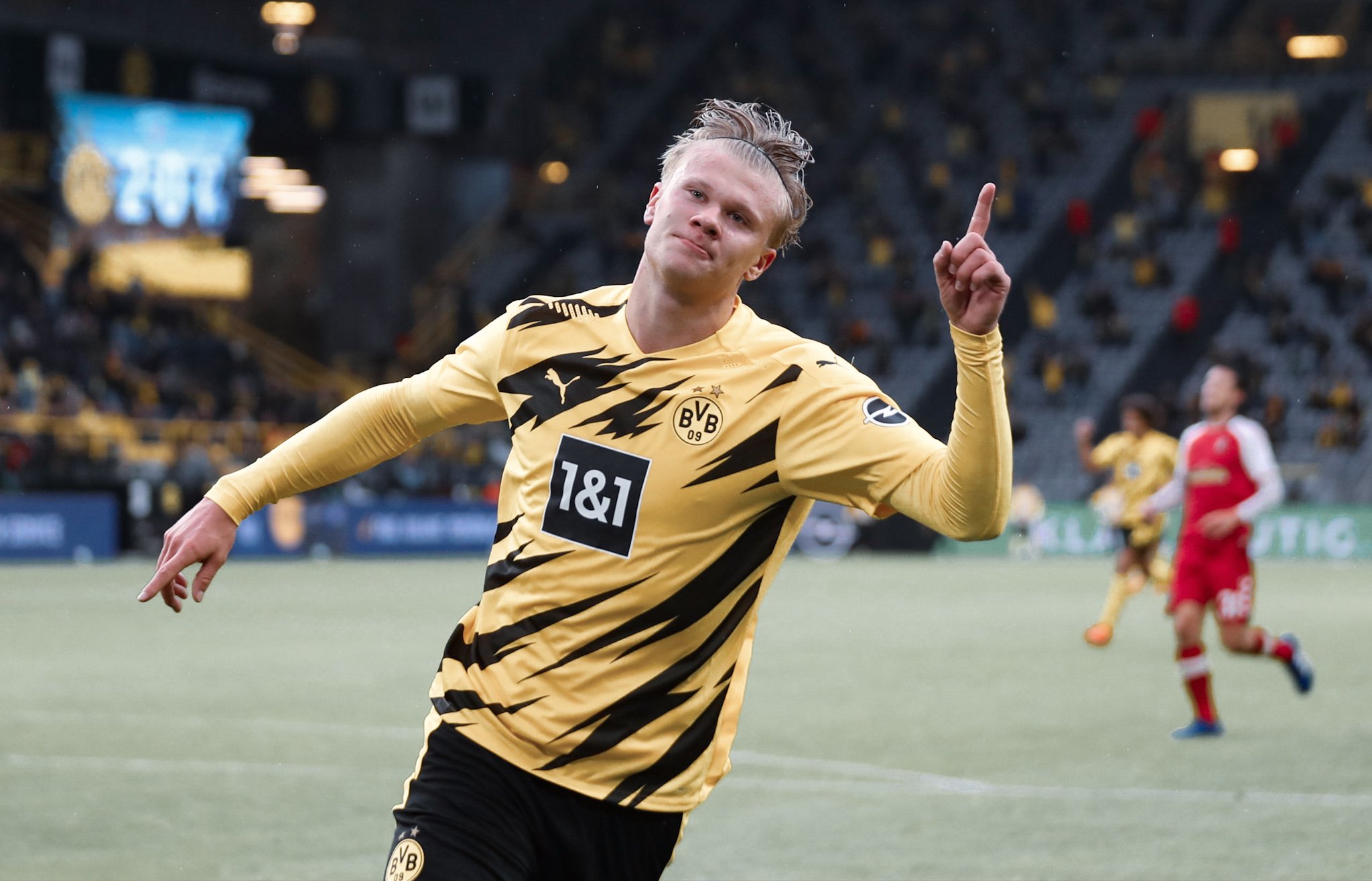 Erling Haaland is set to dominate the world of football for the next decade, and Barcelona will regret if they do not sign him in the next summer window.

Whenever Barcelona are linked with new players, one question always emerges: “Does he have the Barça DNA?” Although a vague term, Barça DNA has come to mean the traits that a Barça player should have, whether already at the club or a prospective transfer. These traits include everything from being technically sound to fitting a possession-oriented style — think of Xavi Hernández, Andrés Iniesta, and Lionel Messi.

It’s natural for a club to want players that fit their ethos, especially Barcelona who have such a well-established identity, but where should the line be drawn? Should the Blaugrana miss out on top players because of an inhibition to change tactics, or should the team mould itself around them?

This is where Erling Haaland comes into play. At only 20-years old, Haaland has already solidified himself as one of the best young players in the world, and his position at centre-forward fills a dire need for the Catalans. And to the joy of Culés, the links to him have already begun, with Joan Laporta particularly interested in signing him for the club when and if he becomes President.

Rumours around his signing prop up two eternal arguments: He’s a world-class player that we need versus, he doesn’t fit our player profile.

How do Barcelona navigate this tricky situation?

Who is “The Terminator”?

Dubbed ‘the Terminator’, Haaland burst onto the world stage in the 2019-20 season with Austrian club Red Bull Salzburg, tallying 24 goals in 20 appearances. He also made headlines with the Norwegian international team in the under-20 World Cup, where he scored nine goals in one match.

His ‘meditation’ celebrations are among things Haaland has caught attention for. (Photo via Imago)

In January 2020, he made a mid-season switch to Borussia Dortmund and has been wreaking havoc ever since. Now in the midst of his first full season with the German club, Haaland has scored 33 goals in 31 appearances, winning the Golden Boy Award as well, looking set to dominate world football for the next decade.

Haaland is notorious for his finishing, goal-scoring instincts, and intelligent off-the-ball movement. He scores in a variety of manners, whether with powerful long-range shots or well-placed finishes. As aforementioned, his goalscoring record speaks for itself, having already scored 17 goals in 13 appearances this season.

At 6’4″, he is a menace for opposing defenders, boasting a natural ability in the air as well as blistering pace, a combination unheard of, and feared. Earlier this year in a match against Paris Saint-Germain, the Norwegian reached a top speed of 36 kilometers per hour.

The 20-year old tends to play off the shoulder of the defence, menacingly waiting for a through-ball or long ball from his creative teammates.

Below is Haaland’s heat-map from this season, representing his average positions on the pitch. Evidently, he lurks in and around the box, waiting for the right moment to pounce.

Haaland’s heat-map from for the 2020/21 BuLi season. (Courtesy Sofascore)

With the ball at his feet, his pace and physicality allow him to out-run his defender, and without it, his world-class positioning always results in him being in the best spot to score a goal. His movement also drags opposing defenders, putting his teammates in prime goalscoring opportunities. Haaland is a nightmare to defend and must be closely marked because all he needs is a sliver of space to score.

Though not his best attribute, he can link up well with his midfielders, playing small one-twos, then receiving the ball in the penalty box.

Haaland is a versatile scorer, who can do a lot with creators like the ones Barcelona has behind him. (Photo via Imago)

Haaland is a counter-attacking threat as he can use his pace to capitalize on regrouping defenders. He’s also adept at holding up the ball, fending off defenders with his physicality and laying the ball off to his teammates. He’s an old-school number nine, with drops of a brilliant, adaptable player who can score goals out of thin air.

With at least a decade in front of him, Haaland can still improve, and one can only wonder what his ceiling is.

“I’ve maybe been around too long but I have never seen a guy since maybe Messi or Ronaldo that developed at such a young age. That’s very unique and he has all the possibilities to become a really world class player.”

The Numbers Behind the Player

In his young career, Haaland has already established himself as one of the most lethal finishers in the world. He recently became the youngest and fastest player ever to reach 15 Champions League goals, as well as the youngest to score four goals in a single Bundesliga match.

The Norwegian-international has taken 91 shots on target in his professional career, and scored 72 goals, giving him an astonishing shots on target to goals ratio of 79%. He’s averaging 4.21 shots per 90 minutes this season and 2.59 shot-creating actions. Additionally, he comes up with 0.53 goal creating actions a game, showcasing how much of an all-around threat he is.

His goalscoring attributes (red) clearly stand out and his creative stats (yellow) are promising too.

The graphic below compares Haaland’s stats in the Bundesliga over the last two seasons with Bayern Munich’s talisman Robert Lewandowski.

The stats are eerily similar, albeit Haaland has played almost half as many minutes as Lewandowski, arriving not before January. The most noteworthy one being the G90 (goals per 90) and A90 stats (assists per 90), where he eclipses the Pole. A goalless outing today barely provides a dent to what has been a fantastic start to life in the 2020/21 Bundesliga season.

Haaland is evidently a world-class forward, yet questions about his fit persist. Some fans question whether his player profile suits the Catalans, and many are wary of his lack of “Barça DNA”.

While he’s not as much of a creator as Barça might want in the striker position, he’s by no means inept and still has so much time to improve. Furthermore, Barça’s front line is filled with creative players like Lionel Messi and Antoine Griezmann, and they desperately need someone who is lethal in front of goal. He may not be renowned for his passing or creating in tight spaces, but he excels in the most important duty of a goalscorer: scoring goals.

The goal against PSG is testament of the plethora of goals Haaland is capable of scoring, something Barcelona crave for. (Photo by Lars Baron/Bongarts)

On the other hand, Barça typically face teams that like to sit-deep and form a low block. How would Haaland fare against opposition that won’t allow him to maximize his pace and darting runs? Given his ability and instincts, it’s safe to assume that with the right creative pieces behind him, there’s no doubt Haaland could thrive in any setup, especially given his height and built, which can help him bully the strongest defenders in the box.

Above all else, it’s necessary to consider whether Haaland would even want to go to Barcelona, let alone whether the Catalans should pursue him.

The club is an institutional mess, and the squad is performing poorly. It’s not exactly an ideal spot for any player. Barcelona are also struggling financially, and can not realistically pursue Haaland without offloading a lot of other players. Haaland does have a fixed release clause of €75 million, though, and certainly, that plays into Barcelona’s lap. The centre forward would definitely need assurances of being an undisputed starter, as his ability certainly warrants that.

Another reason Barcelona should definitely get into the action to bring him to Spain is because rivals Real Madrid are the clear favourites to sign Kylian Mbappe from Paris Saint-Germain. Ansu Fati, for all his brilliance, is too young to draw comparisons with the Frenchman, but Erling Haaland is the man who can give him real competition, and if shove comes to push, even overtake him.

Alongside Kylian Mbappé, Haaland might be the best young player in the world right now. He has all the necessary attributes to shine anywhere and is a transfer target for most of Europe’s big clubs. The 20-year old could potentially lead Barça’s front line for the next decade, and he could be Barça’s next iconic number nine, following in the footsteps of Luis Suárez, David Villa and Samuel Eto’o.

Haaland is set to dominate the decade, and Barcelona will regret not getting him. (Photo by Ina FASSBENDER / AFP)

He would surely astonish the Camp Nou, even without the so-called “Barça DNA”, but his transfer depends on navigating the financial crisis, and his on the pitch success depends on the right coach. However, just having Haaland on the team sheet, Barcelona would return to instilling genuine fear into their opponents.