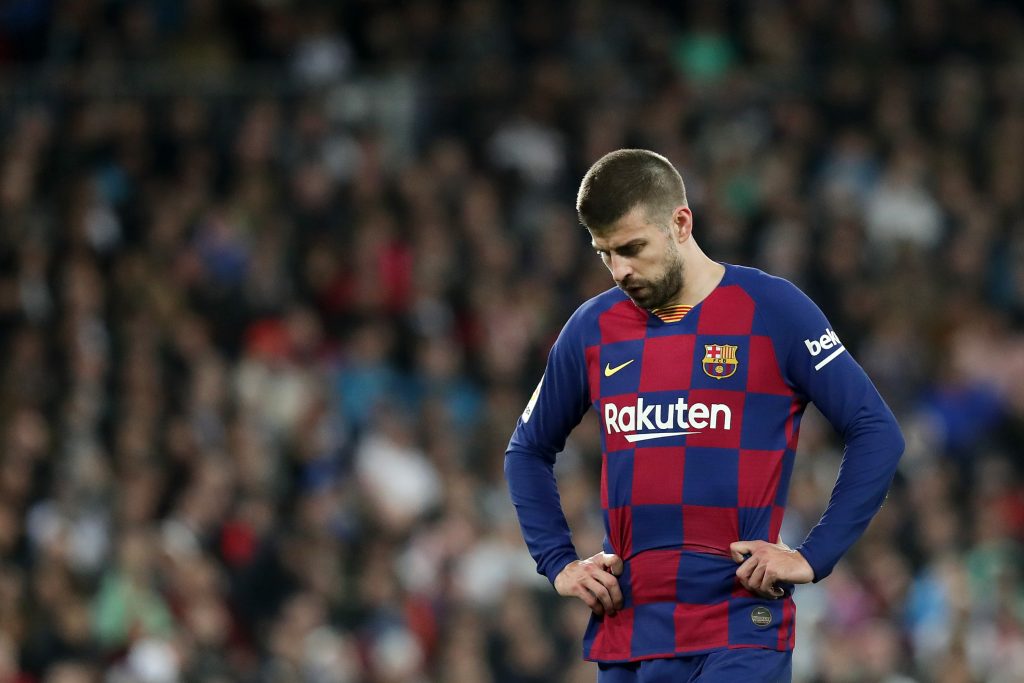 Losing a match against the eternal rival is painful. Watching Messi’s performance too. Real Madrid won the game and recovered the leadership. However, this result is more than just a defeat, leaving in the air many possible futures. What does this result mean?

The duel against Real Madrid was difficult and frustrating to watch. Barça used to win year after year at the Santiago Bernabéu with great collective performances, but above all, great performances by Lionel Messi. Now seeing that the times are not as before is devastating. Setién’s plan worked during the first half, in which we dominated the game but the team missed clear scoring chances. A shame. However, in the second half, everything changed. Zidane’s team began to press more and regain control of the ball. Although with Braithwaite’s entry it seemed that the Catalans started to recover the control, it was not long until Vinicius scored and took away the Blaugranas hopes. Later on, Mariano Díaz closed the Clásico with a goal in the last minutes.

The Merengues ended up winning the duel. However, there are still hopes and many possible futures with this defeat. Although Madrid regained the lead, there are still 12 games left to play in La Liga. If we turn them into points, they are 36 possible points. There is still a lot of time. This match more than 3 points for Real Madrid means much more. It’s necessary to analyze part by part the possible scenarios such as the following matches of Los Blancos and Azulgranas. Moreover, analyze what would happen in the case of a tie and what measures should be taken to get closer to winning La Liga. So, What does this result mean?

The development of the remaining matches in La Liga and the options to return to first place no longer depend on the exclusive Barcelona’s success. Now we also have to be attentive to Madrid’s evolution week after week, look if they drop points by tying or losing a match. They could achieve the extraordinary feat, for the rival, to win the remaining 12 games. However, the consistency and regularity that the Merengues have had throughout the season reflect that in what remains of the calendar they’ll most likely be exposed to an opponent and lose points. So we can be calm since Real Madrid will sooner or later lose some of those 36 points. Zidane’s team will have to have a lot of luck to get all of those points.

Real Madrid will have complicated matches in which it will be difficult to obtain the 3 points in each one of the clashes. They will face teams like Real Betis, Real Sociedad, Athletic Bilbao, and Espanyol away from home. In the Bernabéu they’ll play against Valencia, Getafe, Villarreal, among others. For obvious reasons, Madrid is the clear favorite in each of the duels that are still to be played. However, it won’t be easy to keep up a good pace of victories against all those rivals. And even more, if we consider the great moment of teams such as Real Sociedad or Getafe, or also that two challenging stadiums where the Merengues will play: Benito Villamarín and San Mamés. In addition, we must take into account what will happen in the Champions League. If Zidane’s team manages to eliminate Manchester City then their players will arrive more tired for those games. This result means more than any victory this season by Los Blancos.

Just as Real Madrid will have very complicated matches, the same will be for Barcelona. Hoping that the eternal rival would lose points in the remainder of La Liga, we have no choice but to win all those games. The only problem here is that statistically, we’ll have a high level of difficulty. I’m talking about away clashes. Out of 20 meetings that Barcelona has played away from Camp Nou this season, it has only won 8, the rest has drawn it (5) and lost (7). Some numbers that don’t favor Barça to make the comeback in La Liga. It will be a very challenging issue for Setién, but not everything is the coach, the players also have to fully commit to the team. Because of our short squad, it won’t be easy, but it is not impossible either. Even if this result means more problems to the club, the team can still achieve big things.

The Azulgranas will face away from home Sevilla, Celta de Vigo, Villarreal, among others. Those 3 teams that we’ll face have stadiums where the pressure and the environment that will affect Setien’s team, as it has been doing this season. In Camp Nou, some of the teams with which the Catalan club will meet are Real Sociedad, Atlético Madrid, and Espanyol. A team that is playing brilliantly as is the Real Sociedad and two other teams that aren’t in great shape but always when they play against Barcelona give everything to get the victory as are Atlético and Espanyol. The positive part is that the Culés will play as locals, something that is a relief. The negative part is that among the 3 teams that we’ll face at home, we have only won against one of them this season. It was against Atletico Madrid when Messi scored in the last minutes to get the victory. Winning everything seems complicated but let’s never forget what this team can achieve when they have the right mindset. They’re simply unstoppable. The Blaugranas cannot afford to lose any game at the Camp Nou and give the maximum sacrifice as visitors.

What would happen if both teams tied in points?

It may be the case that Madrid and Barça tie in points at the end of the season. Although this scenario is unlikely, it’s one that could happen and that we cannot rule out. If this happens, Real Madrid would be La Liga champion. In accordance with the rules of the Spanish League, several criteria are taken into consideration to choose the team benefited in case of a tie. Each criterion has a level of importance that if one is not applied, the following would be taken into account, and so on.

In this case, the first criterion would be considered. As stipulated in the La Liga rules: If two teams finish on equal points, the first tiebreaker criterion is the result of direct confrontation between those teams that finish the tournament on equal points. As if this were the global score of a qualifying match in the UCL. In the first leg, the final result was 0-0 and in the second leg, it was 2-0 in favor of the Zidane’s team. A result that would put the Catalan team at a disadvantage with -2 goals and put the Merengues ahead of us. If Barça had tied the Clásico 1-1 they would have the advantage in the title race. A shame that the Culés couldn’t tie the game. Therefore, it doesn’t matter much how many goals the Setién team scores from now on. It won’t be valid for a hypothetical tiebreaker.

We don’t have to travel too far in the timeline to find a precedent with this tiebreaker rule. This took away the title from the Blaugranas. In the 2006-07 season, we lost 0-2 in the Bernabéu, while we tied in the Camp Nou with a 3-3. Fate wanted the two to tie points at the end of the regularity championship, which took that cup to the Madrid showcases. That’s one of the reasons that this result means a lot.

The strategies that Setién must carry out

Although the scenarios aren’t on Barcelona’s side, the team still can do things to lift the La Liga trophy. Difficult? Yes, impossible? Not at all. Analyzing Madrid’s situation and, although the Azulgranas don’t depend on themselves, it’s very likely that our opponent ends up losing points in the remaining 12 games. This is why Barça cannot relax for a second. The Azulgranas need to inject a dynamic and a winning mentality to be equally strong in the Camp Nou and away from it. We cannot demand too much from Quique Setién with the available players he has but there are ways to manage the squad to benefit and win the remaining 36 points in the competition.

“We were affected by the defeat, but the league is not over yet.”

Making congruent and continuous rotations will be crucial. Avoid making the mistake of playing two straight games with Umtiti and then leave Lenglet on the bench or not to let Fati or Braithwaite to play but, instead, give those minutes to Vidal after playing 2 matches in a row. Arturo is a wonderful player but he can’t play every single match, eventually, he’ll get tired. Don’t be afraid to rest indispensable players like Messi, Piqué, Alba, Busquets or Griezmann. Maintaining a healthy team will be important with the few players available and Setién must be brave with his selections, but actually making wise decisions. One thing is to be brave and another completely different that is doing something totally illogical.

2. Stick to one gameplan and leave the experiments aside

Since his arrival at the Catalan club, Quique Setién has experimented with many approaches. Using formations such as 3-5-2, 3-4-3, 4-4-2, 4-3-1-2 and the typical 4-3-3. It’s time for these tests to end and stick to a game system. With the players available in the team the most indicated would be a 4-3-3. It also has the perfect players and with the perfect characteristics to use in this formation. Enough of putting Vidal in the attack or De Jong in the wings, they both struggle to adapt to those roles. Now with Braithwaite’s signing, it makes more sense to stay in a mechanic where wingers are used.

3. Is not all about Setién, players must give a step forward

Barcelona will need the maximum intensity and sacrifice of the players. Improving effectiveness with goals, run and press high in defense will be a huge factor. Improving positioning and focus during the game to maintain organization and coordination too. Giving importance to all players on the court is also a factor to consider. The team has to understand that any player is capable of everything and has to be ready for any situation, such as when Arthur, being a midfielder, had to finish off the goal only against Real Madrid, a shot that should have ended in a goal. To dominate the games based on of the ball possession and to stay calm in the duels away from home

This result means more than just 3 points. If the team manages to follow these strategies, Barcelona will most likely win those 36 remaining points. Or at least, the majority of them. Unfortunately, there is no time for more experiments, there is no time for planning or the vast majority of players available. However, there are ways in which we can increase the chances of winning. I hope to see that with this defeat Barca has reacted. And of course, I hope Madrid to drop points as soon as possible.

El Clásico: Did Quique Setién get it wrong?
What did you think of this article?