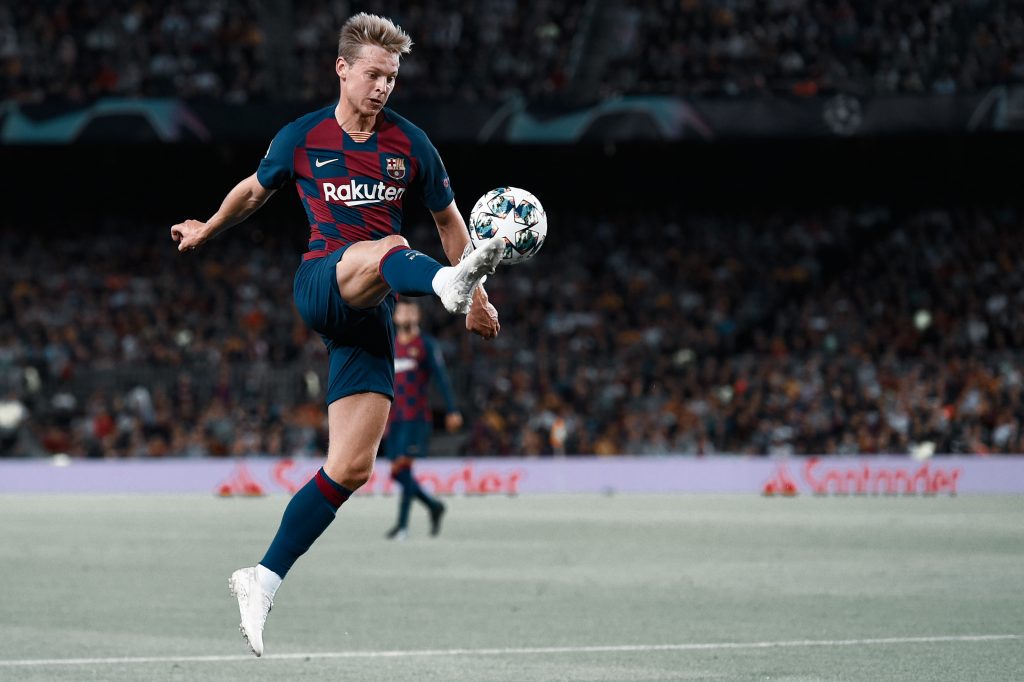 Ahead of the second leg of the Champions League last 16, our editors try predicting the score and players to watch from Saturday’s Barcelona vs Napoli at the Camp Nou.

With PSG, Atalanta, Atlético de Madrid, RB Leipzig plus Friday’s victorious Manchester City and Olympique Lyonnais, only two more spots are remaining to be assigned in the Champions League quarter-finals. Bayern Munich hold a three-goal advantage over Chelsea before playing at their own stadium, so their ticket to Lisbon is all but booked. The other clash on Saturday, though, is far more open. After a 1–1 draw at the Stadio San Paolo, Barcelona hold a slight advantage over Napoli, but only thanks to the away goals rule. In an unpredictable tie, our editors predict the final score and express their player to watch from the Barça vs Napoli at the Camp Nou.

Finally the Champions League is back and although many already visualise Barcelona facing Bayern Munich in the quarter-finals, I would not be so sure. Despite the fact that the Catalans have the advantage due to the away goal, Napoli is a team that can be very dangerous in the important moments and should not be underestimated.

“We will need to have a great game both tactically and technical. But even with a great game, perhaps it is not enough to go through”

Gennaro Gattuso
in the pre-match press conference before facing Barcelona

The game will be extremely energetic and either team can go to the next round. It is time for Barça to either conquer Europe as heroes or stay on the road humbling themselves for the fourth year in a row. Even so, Barcelona are seen as favourites and at the Camp Nou they could get a positive result. But they will have to give their all because otherwise Gennaro Gattuso’s men will not hesitate to pass the round.

Tired of the failures in the Champions League, Lionel Messi knows the importance of this match and that it is one more final. After losing La Liga, the Spanish Super Cup and the Copa del Rey, the captain will not want to end this sad season without trophies. If it is necessary to score a goal, he will do it. If he has to score two, three, four goals, he will score them. Fully fit and inspired, Messi will do whatever it takes to lead his team to glory.

One step at a time

The UEFA Champions League is as daunting as football gets. There is never a favourite going into any clash. After watching Juventus bow out to Lyon, all eyes turn towards Barcelona. On paper, one new to football might consider it to be a one-sided affair against Napoli. However, Gattuso’s men are never an easy force to tackle.

With crucial players missing and a rather shamefully shallow squad, Quique Setién has his work cut out. The away goal will be precious, though a clean sheet is needed to stake claim to its value. With so much on the line, it will be an engrossing watch. Can the usually panicky Barcelona hold their nerve against an opposition tailor-made to exploit their weaknesses? Or will Napoli’s discipline and pace prove too much? Only time will tell.

It is no secret that the midfield was where Barcelona lost the games that emotionally crushed them. At Rome, at Anfield and in so many more cases, it was the middle of the park where the team couldn’t keep up. As for Frenkie de Jong, this is the reason he was brought in. The Dutchman is a mercurial player that can not just control but accelerate the midfield. In a game where the veterans Sergio Busquets and Arturo Vidal are unavailable, there will be a lot of pressure on his young shoulders. He has stated openly that he feels he could have one more in his first season at Barcelona. Well, here is his chance!

It has nearly been a month since Barcelona last kicked a ball, and we are all eager to see what is going to happen in the Champions League for the culés. At the Mendizorroza against Alavés last month, they played with passion as if they had lost their pride against Osasuna before that. What the blaugrana fans should expect is more of the same after the Alavés game and less dilly-dallying in the middle of the park while Napoli wait for Barça to attack.

Indeed, the Neapolitans like sitting back, but they need at least a goal to either win or force extra time. That means they have to attack from the first minute and Barça much more space than in the reverse leg and that’s thanks to Antoine Griezmann’s goal at the San Paolo. Quique Setién also stated that he had no problems in using Ansu Fati and Riqui Puig perfectly.

“Ansu Fati and Riqui Puig are ready to start in the Champions League. When they played, they proved so”

That could imply Setién will bench Luis Suarez, whose decline is terrifying, or even not risk Griezmann to accommodate Ansu. It is more likely, though, that the teenager will wait for his chance on the bench. In the midfield, with two suspensions and Arthur Melo’s situation, Riqui Puig has to start, but the debate is whether Iván Rakitić or Sergi Roberto will start next to Frenkie de Jong.

While Ousmane Dembélé is not available, Lorenzo Insigne injured himself last week and there is an uncertainty concerning him starting, and Nikola Maksimović along with Roma remontada hero Kostas Manolas won’t be available as well. Barcelona have to fight from the first minute and score some goals to gain confidence before facing one of Bayern or Chelsea, but most probably the Bavarians. A win is primordial; the manner is more than that.

It’s so cliché to put Riqui Puig as a player to watch, but look, the youngster doesn’t have Champions League experience. In La Liga, he played exceptionally well, exceeding some veterans’ level in the midfield and running tirelessly to win the ball and pass it in the right areas. In the reverse fixture, Barça lacked creativity, especially in midfield. Riqui’s eye for a ball along with his runs up and down the pitch might stop Napoli’s attack while opening breaches in the other zone.

He must embrace the experience and play as he did for the end of La Liga. Keep an eye on Puig, and you will be able to appreciate the game a bit more.

It is normal to see Barcelona supporters have mixed feelings coming into Saturday night’s clash. This season has been full of ups and downs, but mostly downs, for Barça, which has resulted in the loss of La Liga and immense instability on and off the pitch. The azulgranas have become a box of surprises, with their performance, tactics and even starting XI being unpredictable in each game. Consistency has not been abundant for the Spanish giants.

“I have already spoken about Riqui Puig so much, he’s a young champion who has the game in his blood, it’s a spectacle to watch him play. He’s good for people who love football, and it’s not by chance that Barcelona players usually develop these characteristics”

Nevertheless, there is one way in which the team can bring hope back to its fans: by winning and convincing. A dominant display at the Camp Nou before hopefully heading to Lisbon would increase the optimism among culés and fear among rivals. If right now the main source of positivity comes more from the quality players in the squad – insert Lionel Messi – rather than from the displays exhibited, it is time Barça start to be renowned for their collectiveness and both effective and entertaining football.

Recent reports are not too encouraging with Riqui Puig starting against Napoli. But whether he makes the initial line-up or comes off the bench – hopefully the former –, the 20-year-old will always be prepared to make an impact with his recognisable personality. If Barcelona want to be in control, it will have to be them who dictates the tempo of the game, and there’s no one better than Riqui to accelerate or decelerate to his own liking. 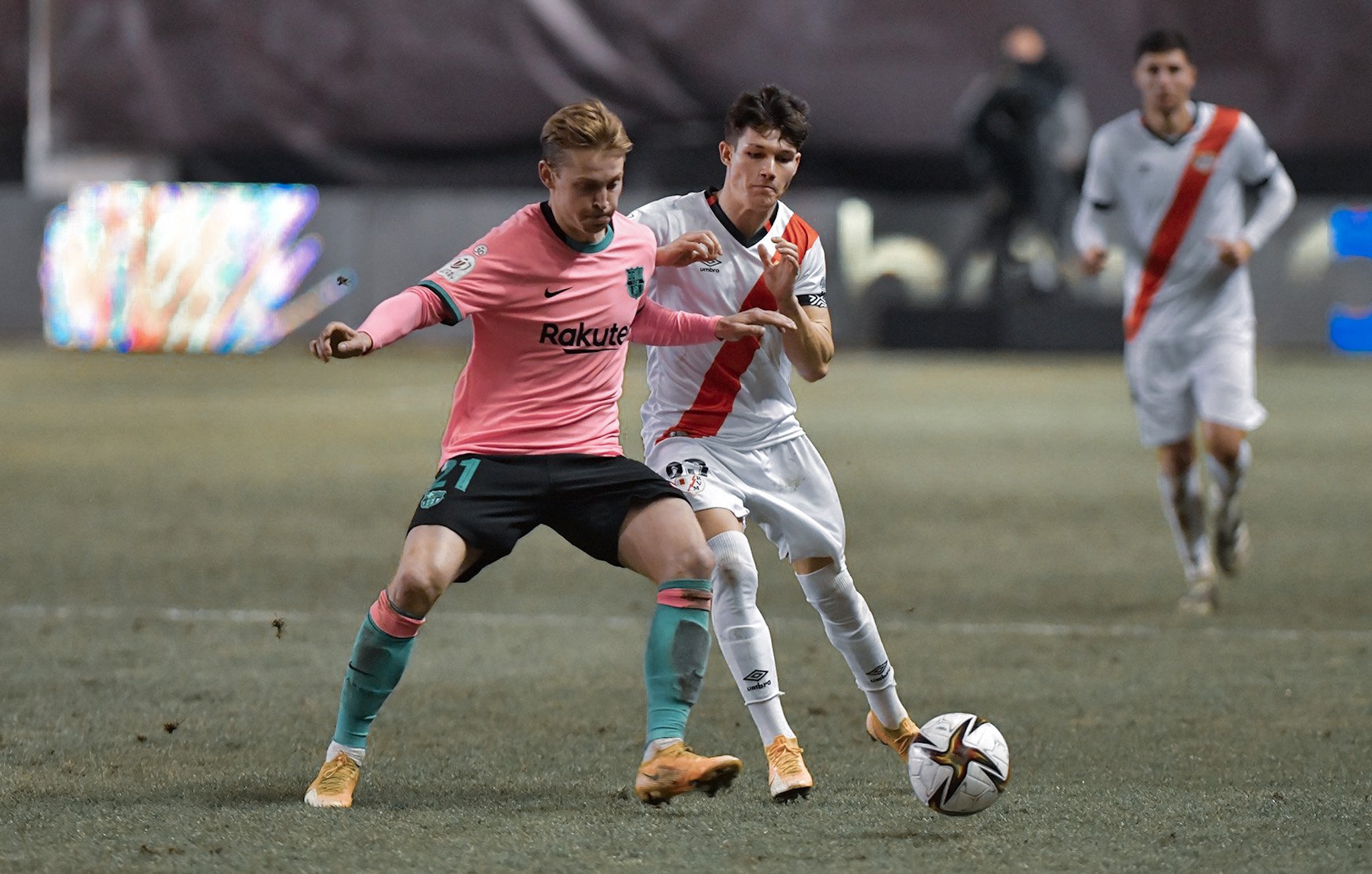 As Barcelona continued their quest to win the King’s Cup, Ronald Koeman experimented. Riqui Puig, to everyone’s surprise, started after scoring his first goal with his boyhood side on the weekend.

Barcelona had an unlucky start to the night with their captain back. The Catalans had many chances and could have won a penalty early on. Francisco Trincão was taken down in the box, but the lack of VAR denied him of a spot-kick.

Lionel Messi, back after two games of suspended, sent a cross right on Ronald Araujo’s head but Stole Dimitrievski was too good. Frenkie de Jong then found the crossbar following a superb cross from Junior Firpo. The midfielder’s effort on the woodwork would follow with Puig, who had a golden chance. Trincão scuffed a shot in front of the Rayo keeper, and the Spaniard had the ball in front of the net. The youngster’s shot ended on the goalpost, and Barça would remain goalless.

Overall, not the worst performance from the Catalans. Sure, they could have scored two or three had they not lacked some finishing, but they thoroughly dominated Rayo away from home.

The first half display did not dishearten Rayo. The locals continued their relentless counter-attacks against a slow Barça team.

The visitors were so slow that Rayo capitalised. Álvaro García danced past Clément Lenglet. Neto could not handle the ball and Francisco García, a Real Madrid loanee, put his side in front. Barcelona had to be rescued, and on came Jordi Alba, Ousmane Dembélé and Pedri.

Neither of the three starters were needed to get the leveller, however. Instead, a work of art from three starters levelled the game for the hopeless Catalans. De Jong found Antoine Griezmann’s run and the Frenchman’s pass made it easy for Messi to score in an empty net. Messi then repaid the Dutchman with a superb chip to Alba, who found the Dutchman lurking in acres of space. Another tap-in put Barça in front for the first time in the game.

Watch De Jong’s goal after a brilliant play from Messi:

Messi creates the play and De Jong finishes it 🔥 pic.twitter.com/jToTIkq2hH

All in all, after a desperate start, Barcelona advanced. Off to the quarters for a side that will go back home on the 31st against Athletic.