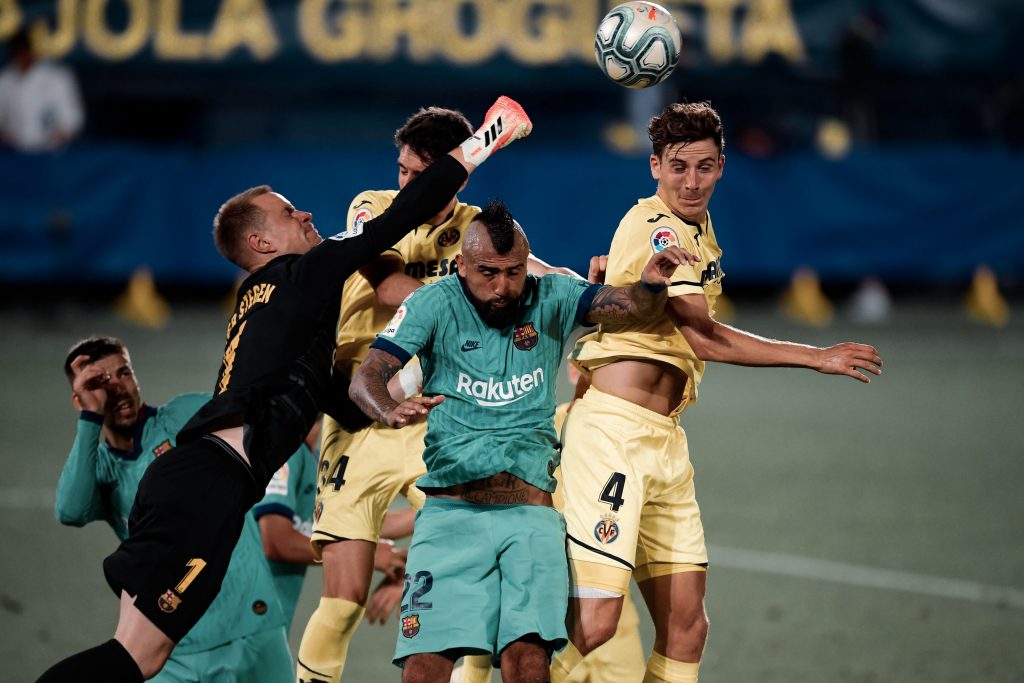 Following a dominant display from Barcelona at the Estadio de la Cerámica, our editors share their takes on the Catalans’ 1–4 win over Villarreal.

Regardless of whether the La Liga title race is over or not, with Real Madrid still holding a four-point advantage at the top of the table, Barça needed to win and perform on Sunday against a challenging Villarreal to recover their confidence for what’s to come. The 1–4 victory, with an own goal from Pau Torres and wonderful strikes from Luis Suárez, Antoine Griezmann and Ansu Fati, couldn’t have been more perfect. Therefore, our editors share their opinions and standout performers from such clash.

Performance of the season

They have waited. Oh how the Barça faithful have waited, for a performance like this. Amid so much negativity that has surrounded the club in recent weeks, today was an absolutely scintillating display from the Catalans. Fluid on and off the ball, coming up with all the right ideas and being devastatingly efficient. Quique Setién and his team showed just what they are capable of.

“We played well, overloaded them [Villarreal] in central areas, made progress out wide, and were a goal threat with shots”

Finally, Quique came up with an innovative solution for his front three crisis. Luis Suárez and Antoine Griezmann playing together up front with Lionel Messi behind them proved to be an absolute treat to watch. The deadly trio finally seemed to be clicking in full force. Other than an initially shaky defence, Barcelona’s performance was glorious. A much-needed win over a very tough opponent in Villarreal. This performance must be the standard. Barça must carry on in this fashion which is their identity: style mixed with immense substance.

Another sight for Barcelona supporters’ sore eyes and it had been a long time coming. After finally being deployed in his favoured position, Griezmann demonstrated the full extent of his stellar ability. The Frenchman was supreme in his movement, his quick one and two-touch interplay was elite as always and he tracked back energetically as he always does.

But, most importantly, yesterday was all about his prowess in attack, something which had been abnormally dormant till the encounter with Villarreal. He linked up with his teammates very well and was brimming with confidence. And the crown jewel of his showing? An absolute wondergoal from outside the box. Set up by Messi with a wonderful backheel assist, Griezmann emulated the Argentine maestro’s chip against Real Betis in 2019 with a daring, deft and delightful goal. Hopefully, this performance serves as a turn in fortune for Griezmann at Barça.

A punch of nostalgia

A magical night of football at La Cerámica. A night that culés will be talking about for weeks or months to come. Barcelona dominated the game for most parts, easily threading balls through Villareal’s world-class midfield and defence. The game goals of the highest quality, and saw a Barcelona side that played with intent, passion and purpose.

The much-hyped Lionel Messi, Luis Suárez and Antoine Griezmann front line showed what it can do when the cards are played the right way. Quique Setién’s masterplan of playing Leo in a free role behind a front line of Griezmann and Suárez reaped rewards in spades. The Yellow Submarine often threatened on the counter, but they could not close down gaps, and that let the game get away from them.

Every player in the blaugrana colours had a night to remember, with Sergi Roberto pulling of a masterclass in midfield. Villarreal keeper Sergio Asenjo had a wonderful game despite conceding four goals, a clear indication of the nature of the game.

However, given how important this performance was to his confidence, Antoine Griezmann was a clear standout. He played with confidence in spades, linking up beautifully with his Argentine and Uruguayan partners in crime. Defensively he was as committed as ever, and he also finished the game with an astounding 98% pass accuracy. To cap off a solid performance he scored an absolute gem in the first half, a goal to remember for years to come. A much-needed boost to a critical player could come at no better time!

Fianally a cohesive front three and an excellent performance

In a 1–4 victory, it finally looks like Quique Setién has solved some of Barcelona’s problems. Villareal now must win every match to even retain a Europa League spot in what was a disappointing performance for them. Barcelona’s front three finally seem to have chemistry and it looks like Griezmann has finally started linking-up well with Messi playing behind Antoine and Suárez. Griezmann’s and Messi’s interchanging roles were also a breath of fresh air for the team. Sergi Roberto put in a shift with consistent excellent work through the 90 minutes as well.

At long last, the ‘MSG’ attacking trio was highly functional for Barça | Photo by Maria José Segovia / Zuma via Imago

Villareal’s defence lacked organisation and especially the full-backs were getting dragged out of position often. The Catalans must be pleased with such a performance along with some great cameos by Riqui Puig and Ansu Fati. This system seems to suit the team really well apart from the fact that the defence is not very solid yet.

The Frenchman finally looked like a part of the front three and not disjoint. Antoine Griezmann’s link-up play benefited the system as him and Messi could interchange roles often. More importantly, after such controversy in the past week, Griezmann showed his hunger throughout the match. Always looking to press, actively cutting passing lanes and energetically chasing down every ball. Always looking to get the second and third balls as well, Griezmann was giving his all for this match.

His decision making was excellent as well, knowing when to play the short pass, knowing when to lay it off. Especially, his runs and positioning in the final-third were impeccable. The goal he scored was pure talent, but even the way he made the run and Messi knew where he would be was a spark of hope for a potentially deadly front three which Barcelona haven’t had with Griezmann.

Perfect from A to Z

Barcelona’s recent games usually drew a pattern of playing well one half and below-par the other. The first half in Sevilla was tremendous but what followed was abysmal. At Balaídos against Celta de Vigo, it was the first half that was good enough, but the second cost Barça the league. This game, when Real Madrid surely had wrapped up the title at San Mamés earlier, shows everything right with Setién’s ideas.

His 4–3–1–2 did the trick, especially against such an open team. Griezmann in his preferred position behind the strikers and allowed to free roam; the full-backs given space and time to attack, which suits Nélson Semedo and Jordi Alba to the ground; and a mixture of shutters and creators in midfield was a match made in heaven for the culés.

The opening goal was the epitome of such a well-structured system. After a nice build-up, Alba got the ball in a dangerous area, and Griezmann’s dizzying movement made Pau Torres nervous and, eventually, the young defender scored an own goal. The pressing was relentless, and only broken during lack of concentration, which is where Villarreal’s goal came from. Other than Gerard Moreno equalling his most prolific season in the league, Barça weren’t really bothered by the Yellow Submarine, other than two opportunities by Carlos Bacca and Samuel Chukwueze.

“Today was an important victory. The team played with seriousness and we can all be satisfied. We will keep battling for La Liga until the end”

After the goal from Villarreal, the Catalans showed their dominance, and the goals that followed were a joy to behold. Suárez’s Anoeta-like strike was insane and Griezmann’s Messi-esque chip from outside the box was equally crazy. In the second half, the dominance continued, and it was nice to see Ansu Fati get rewarded for his hard work after an insane chipped pass from Jordi Alba.

This performance was everything Barça needed: Confidence, genius and composure, something they had lacked at the Sanchez-Pizjuán, Balaídos and at the Camp Nou against Atlético de Madrid. It also fills fans with confidence for the next few games, and even though the league seems out of reach, fighting for it and keeping the momentum for the Champions League will be crucial. Performances like this were duly needed at Camp Nou, so brace yourselves culés.

Amid every polemic that emerged this week, Antoine Griezmann was the hottest topic. After entering the pitch in the 90th minute against his former side in the last game, the Frenchman’s future at the club looked bleak. Nevertheless, Griezmann wasn’t doing anything wrong; it was Setién that seemed to utilise him wrongly. Griezmann can’t play on the wing; he lacks flair and dribbling isn’t forté. Using him more centrally and in behind two world-class strikers, in Messi and Suarez, was the key to all this system clicking.

The Frenchman free roamed his way to his best performance for the club, running everywhere and opening spaces for his teammates. He compensated for Messi and Suárez jogging in the pressing by showing what a few years under Diego Simeone do, which is multiply his work rate by two. Brilliant on and off the ball, he crowned such a jewel of a performance by scoring a chip resembling Messi’s against Real Betis last term. He made the system tick and it might be the system that takes Barça to another level. Sublime.